As I sit here and watch the Salty Dawg fleet, heading to the Caribbean and points south, I recall my trips over the years and am imagining the questions that are going through the minds of captains and crew of the many boats underway.  Being far out at sea and knowing that there is a hurricane bouncing around the Caribbean, first heading west to Honduras, on to Cuba and now up the west coast of Florida does give pause for thought.

It’s been a very busy season for hurricanes and may very likely end up being the busiest on record, with nearly 30 named storms.   As the fleet left the US to begin their run, there was at least one comment on Facebook questioning if it was a good idea for everyone to head out with a hurricane moving through the Caribbean.   Now, days later, Hurricane Eta (they ran out of names and had to start all over again because there have been so many storms), continues to bounce around the Gulf and is not expected to threaten the fleet.  Chris Parker, of Marine Weather Center and the router for the rally, felt strongly that the storm would not be a threat to the fleet and it seems that he was right.

Three years ago, I decided to leave Beaufort NC much later in the season than I would normally, January verses November.   After speaking with Chris his observation was that the weather leaving from south of Cape Hatteras was often more predictable in January than in November, when the summer and winter winds are still duking it out.

As we approached our anticipated departure date, I spoke with Chris and we settled on January 5th, if I recall, to head out.  There was a developing ridge near Puerto Rico and as long as I was able to maintain a speed of at least 7kts, I would pass the area before the feature moved into my path.  By taking this approach we assumed that I would pass the area ahead of the ridge and avoid the gale force winds north of the ridge and instead, be south of it and enjoy trade wind sailing with 15kts on the beam.

However, it didn’t work out as planned as I was slower than anticipated, averaging only 6.5 knots and the ridge moved into my path about 12 hours earlier than anticipated.   As a result, instead of our enjoying trade wind sailing, we had 4.5 days of running before a gale with nothing up but a double reefed main.  It was not a fun experience as we crawled up the backside of 20′ waves at 4-5 knots and surfed down their face, sometimes at 20+kts while we all lived in fear of an uncontrolled jibe or something breaking. 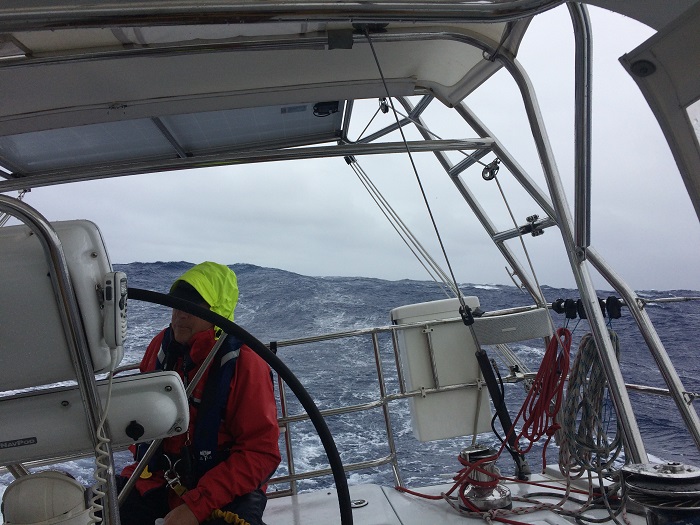 The autopilot steered the boat very well but ultimately a linkage failed and while someone was able to take control quickly, but before things were under control, we slewed nearly broadside to the waves.  It was a very hairy moment, and one that I don’t want to repeat.  I was able to repair the broken linkage but it took several hours and after the failure, we really didn’t trust my fix and someone stood at the helm every moment for the rest of the trip.  It turns out that the prior owner had experienced this exact same failure multiple times over the years.  Great to hear, after the fact.  I was determined to avoid a repeat and re-engineered the linkage assembly.  Now, thousands of miles later, no breakage.

The point of bringing up this experience and why I ran into terrible conditions,  is that I underestimated my speed and the ridge came in early.  What I learned from this trip is a clear understanding that I need to always need to take into account how the forecast might change and build in contingencies.  Or as my wife Brenda likes to say, “prepare for the worse and hope for the best.”

It’s pretty clear to me now that I should have just waited a few days instead of assuming that everything would go according to plan.  Chris’s forecast wasn’t off by much and had warned me about the possible variables, but a small change in the weather and my underestimating my speed made a big difference in our experience.   There I was in Beaufort, crew on board, itching to get going and so was I, so we left.  Fortunately, those 40+kt winds were behind us instead of us having to close reach in a gale, which would have been much worse.

So, all of this brings me to the topic of this post and that’s what’s going on with the fleet who are participating in the Salty Dawg Rally to Antigua.

For several days in advance of the fleet leaving each year, Chris conducts an evening briefing for skippers and crew to help them better understand the developing weather picture.  In spite of what the weather expected, he always stresses that with a trip of 9-14 days, it’s very hard to anticipate what will happen after the first few days.

In this case, Chris recommended that boats leaving from the Hampton VA area should head NE for the first few days before tacking and heading for Antigua.  The point being that by making as much easting as possible early in the trip, they would likely avoid having to beat into strong easterly trade winds later in the trip.   This advice seems to be playing out as the fleet gets closer to their destinations, some of skippers that are a bit west of the bulk of the fleet will have a tough time making enough easting to avoid a stop in the USVIs or perhaps Puerto Rico.  Chris is anticipating, and the current maps show, that winds will be a bit south of east as they approach the Caribbean and boats that are not far enough east will have a rougher go of it.

Chris is sensitive to the needs of many of his clients, often older folks, like Brenda and me, who are looking for easy conditions and adjusts his forecasts accordingly.  In this case, recommending that boats put some “easting in the bank” by heading to the NE early in the trip would give them a more favorable point of sail as they passed east of the Virgins.

Boats that are farther east will have apparent wind on the beam verses being on a close reach or worse and as the wind is expected to increase into the 20s ore higher.   The closer to the wind the more uncomfortable the run will be.

Note that I have marked Antigua, the destination for most boats, with an arrow below.  Of course, some boats were headed to the Bahamas and a few to the USVIs so it is expected that some may be on a track that takes the west of the rhumb line to Antigua.  However, those who are west of their intended track may very well find that making it all the way to Antigua could be a challenge. 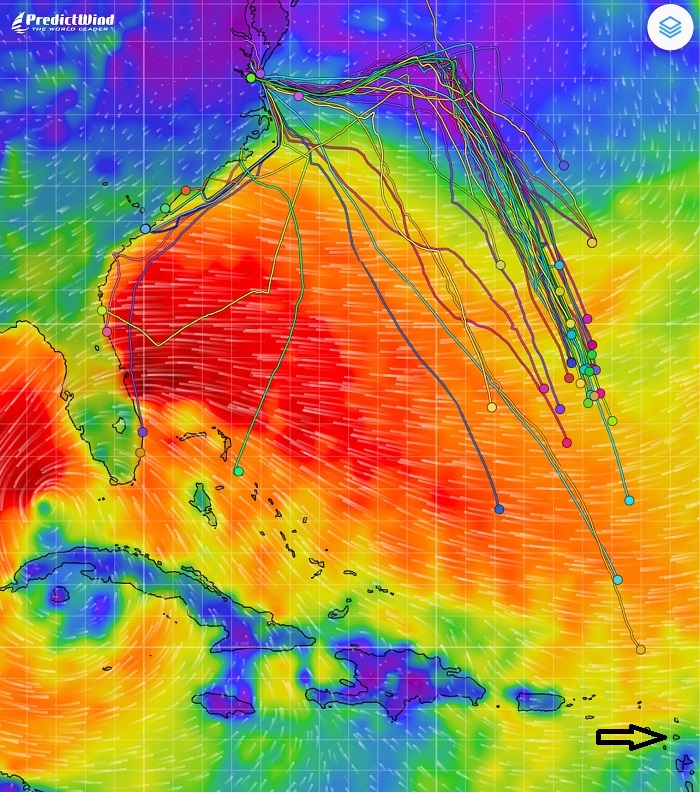 To see the fleet in real time, and see how this all plays out, click here to go to the Predict Wind Salty Dawg Page.

The point is that when Chris recommended that the fleet head to the NE, and most did, he wanted to allow for a possible subtle but important shift in the weather days down the road that would avoid the discomfort of beating to weather.  Chris is not always right but he works hard to allow for unanticipated changes in the forecast, an opportunity to “prepare for the worse and hope for the best.”

It will be interesting to see how things develop over the next few days and I am hopeful that the boats that are more to the west won’t have to abandon their goal of arriving in Antigua with the rest of the fleet.

From my perspective all of this and my own experience over the years and from my youth, is that sometimes “mom, and your weather router, really does know best”.

Trust your mother, or at least your router, and more often than not, your trip will be more fun.

And, as they say, “gentleman and cruisers never beat to weather”.

Good luck with that!

2 responses to “Mom (and your weather router) knows best.”