Where is Pandora going?

So, where is Pandora going?  Since last fall, Pandora has been on the move and covered a lot of ground.  From CT to Hamption VA, onto Antigua, south to St Lucia, north to the USVIs and Bahamas, to Florida and most recently, to Annapolis.   Where will she go next?

It’s a good question and I really have no idea.    All I know for now is where she is and that’s near Annapolis. 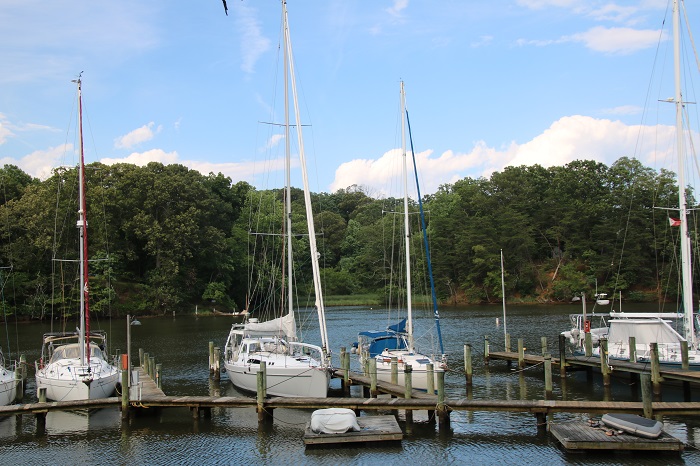 When we were in the Caribbean, and trying to find a way to get Pandora, and ourselves, back to the US, I spent a lot of time thinking about where to go, where to base Pandora for the summer and what would happen next.

I will say that being stuck in the Caribbean and confined aboard week after week, took a lot of the fun out of the cruising lifestyle and now a six hour drive from her isn’t fun either.

Our friends Bill and Maureen, who have lived aboard for years now, are truly in limbo, back in the marina in St Lucia, where they have been for several months now.  They were there when we arrived in February and haven’t left the island since then, still hoping that Trinidad will open up again before they are deep in the hurricane season.  If the island doesn’t open up, well, they will just have to work hard to dodge any hurricanes that come their way.

While things have begun to settle down, well at least into a routine, in many places, Trinidad, outside of the hurricane zone, where they normally spend their summers, still hasn’t opened up for new arrivals.  This means that they must stay constantly on alert for the possibility of developing hurricanes and the fear that they may find themselves in the path of a devastating storm.   Actually, they say that they aren’t worried but I will admit that we are and hope that all goes well.  We spoke with them on Zoom the other night and they seemed calm enough.

As beautiful as the islands are, life aboard isn’t always “living the dream” as being anchored in one place or stuck in a marina for months at a time gets old especially when you are confined to your boat and there is nothing to do beyond hanging out or perhaps some time ashore at a nearby beach.  And, to make matters worse for anyone still waiting to move to safer waters, most all cruisers have already headed elsewhere in anticipation of the hurricane season so it can get a bit lonely.

While some are confined, others have found themselves to be “confined to nowhere”.  There have been many stories within the cruising community of cruisers that were on passage when the pandemic hit and upon arriving at their destination, were turned away, only to find that they were hundreds, or thousands of miles from their next, uncertain landfall.

Indeed, this is a difficult time for cruisers, especially those who put careers on hold, sold everything last fall and headed out only to find that they had nowhere to go and that their cruising plans are now on hold.

Pandora too is on hold in Annapolis, and I am not sure if I’ll have much time aboard for the next few months.   Another complication in all of this that the slip she is in has turned out to be a lot shallower at low tide than advertised so she is hard aground except when it’s nearly high tide, so for half the time each day she is truly “on hold” herself.

There are a few other slips in the marina that are deeper but they are occupied.  I am hopeful that I can find a way to temporarily swap with one someone else for a month or so.   Baring that, I may have to find somewhere else to keep Pandora or I’ll have to be content to restrict my coming and going to high tide.

Our next visit to Pandora will likely happen in about two weeks when we head down to MD for the second birthday of our twin grandchildren.  I wonder when high tide is?

In the mean time, things are now in place to get the aft AC unit replaced.  I have a unit on order and an installer that will work with me as the job is not as simple as just swapping the old for the new.  My plan includes adding a third vent, which should make the new unit much more efficient than the last at cooling the main cabin.

My plan is to head down to Pandora a few days before Brenda heads to Rob’s home in MD so I can remove the old AC unit and prepare for the new installation.  As the installer is are very busy this time of year he really didn’t want to get involved in a more complex job and encouraged me to do whatever I can to simplify the portions of the work that they need to do.  If I am lucky, I’ll be able to handle all of the demo of the old unit, prepare the site and install the new vent in the galley so all they will have to manage is some of the hookups and check to make sure that the unit is functioning properly.

When we head out on Pandora, we won’t be alone as it seems boating is undergoing somewhat of a renaissance as a way for everyone who’s feeling cooped up after months confined to their homes, to get away and yet remain safe and away from possible infection.  I

I read that being inside a building such as a restaurant puts you at an 18.5x greater risk of infection than being outside.   Anyone who has spent time aboard knows that “social distancing” is easy on a boat, well certainly not from those you are aboard with but at least from those on other boats.  Just try social distancing from your family in a space that is about the size of a modest bathroom.

Tempted to get a boat and head off into the sunset?  With so many desperate buyers, if you don’t already have a boat, prepare to spend time in line, as entry level boats are pretty much sold out.

Hundreds of years ago, the Bay was crystal clear but these days the Chesapeake is much degraded and must endure the indignities of agricultural runoff, overflows of municipal sewage and a constant influx of anything else that finds it’s way into the bay.   The Bay is also heavily fished, home to one of the largest fisheries on the east coast, menhaden.

As we made our way north past Reedville, home of the Menhaden fishing fleet, we passed this boat, one of many that make their base in that seaside town. 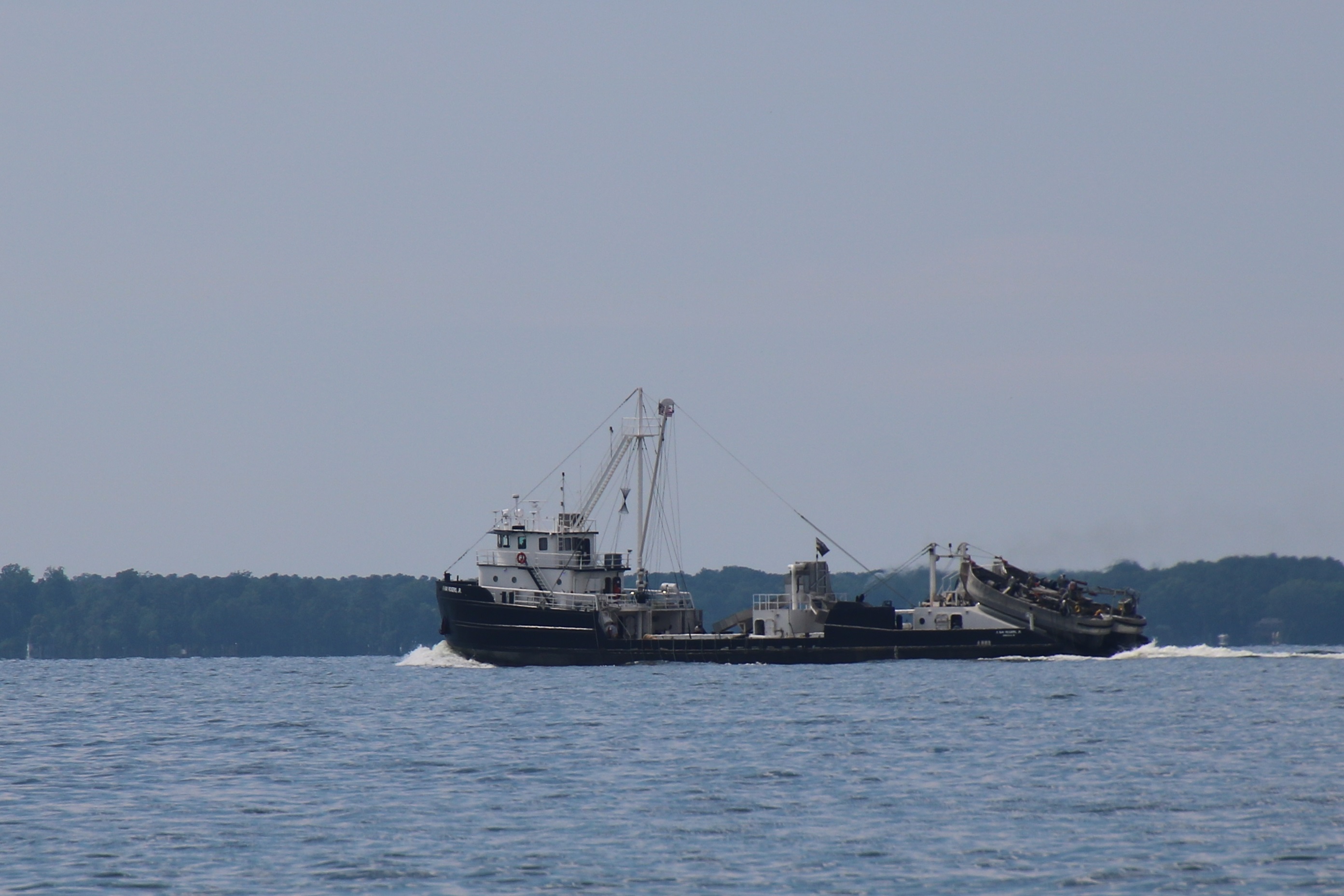 These boats are incredibly efficient at catching thousands of tons of menhaden.  They use spotter planes to find the schools of fish and huge nets drawn together so that they can literally vacuum the fish aboard.  It is a wonder that there are any menhaden left in the Chesapeake given the sophistication of these boats in sucking up stock, day after day, year after year and this fishery is just one of many contributors to the poor water quality of the bay.

This short piece is a good background to this fishery and worth watching.However, that is just one perspective on the subject and state fisheries agencies that oversee the fishery suggest that the stock is stable and being well managed.  I guess time will tell.

It is also important to see how this little fish, also referred to as bunker, fit into the local ecology and how intensive fishing is impacting the health of the bay.Another interesting boat that we passed was the research vessel Virginia.  She was launched in 2018 and is dedicated to improving the health of the bay as part of the Virginia Institute of Marine Sciences, and College of William and Mary.  It’s a pretty neat looking vessel.  I’d love to get a ride on her. 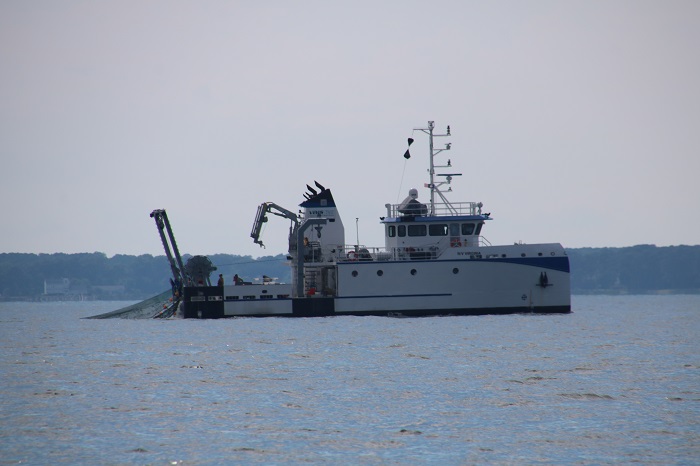 It is good that the Virginia is keeping an eye on things and while there is a long way to go, the bay is in better shape than it was in the recent past.

Well, it is July 4th and while just about everything is canceled due to the virus, I guess I had better get on with my day.  One thing for sure, aboard Pandora or not, Brenda and I will work hard to remain “socially distant” but hopefully not from each other.

So far, so good… “Brenda, are you there?  Brenda?”  Where has that girl gone?

Not sure but I do know that Pandora is hard aground, distant and going nowhere right now.   For me, I’d better go…