It seems like just yesterday when I watched with longing as “Genie” wiggled her nose and like magic, she was there.    I guess I “dreamed of genie” perhaps in more ways than one.   However, we won’t dwell on that right now.

When we started our winters afloat in 2012, staying in touch was very tough and even finding Wifi hot-spots and trying to feel connected with home was an all consuming pastime.

Our “disconnectedness” reached it’s zenith, and not in a good way, when we were in Cuba where the only way to connect was to “rent” time on a government computer in 30 minute installments.  We would purchase what looked like a lottery ticket, scratch off a small area and reveal a code, for time on the computer.  While the time itself wasn’t expensive, tickets could be hard to come by and when they weren’t in stock, there was no way to connect.  As you can imagine, “ticket hording” was common among cruisers.  And, to make matters worse, the service, via a cable from Venezuela, was S-L-O-W, like an old version of AOL dial-up.

Knowing that we had to be prepared to work fast when we finally were able to get on-line.  In order to get a post done in 30 minutes,  we would work up all the text of our blog posts and then frantically upload photos that we reduced to a much smaller size and then flowed in the copy as best we could, plugging a USB stick into the computer.  Getting a post done at all was a huge effort but somehow Brenda and I were able to put up 30 posts over the two months that we were in Cuba.

However, the worse part of the experience was being so out of touch, being denied all but the most rudimentary contact with family for that two months.

Well, here we are, 4 years later and so much has changed.  With Covid-19 raging around the world and so much uncertainty, we are still able to stay in touch with family and friends in a very personal way and we can do so, using our phone as a hot spot.  No, the service is not particularly speedy but compared to past years, SO MUCH BETTER.

Yesterday was our younger son’s birthday and her partner Melody hosted a surprise party for him on Zoom.   Even with very limited bandwidth on my Google Fi phone, we had a blast joining in. 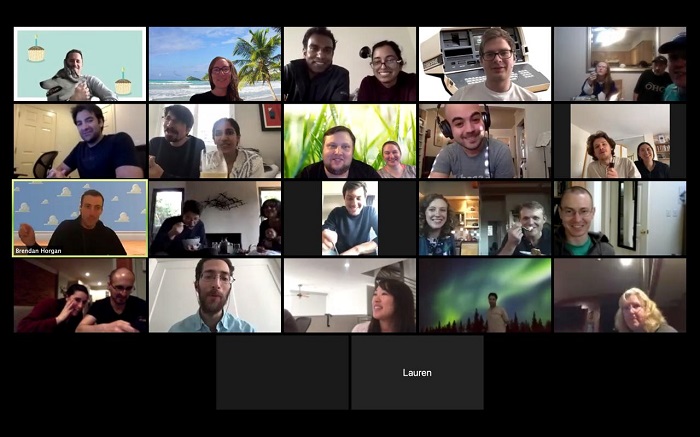 Brenda even baked him a cake, which we each ate a piece of on his behalf.  Sharing experiences was easy but “sharing” a piece of cake still isn’t possible.  Something to look forward to perhaps.  Check back in a few years and we’ll see how it goes.   A cake teleporter perhaps?  “Get on it Chris!  You’re a physicist.  How hard can it be?  As they say, it’s a piece of cake. ”

Teleporter or not, we showed the cake Brenda made, complete with a candle, to him first before cutting and eating a piece ourselves.   The “party group”, some 20 in all, were scattered over a dozen time zones, I think.  Chris, Melody and a number of others in CA, us in the eastern Caribbean and I believe that I heard one participant say that it “was the middle of the night”, where he was.  Europe perhaps?

It was so much fun to be able to sing happy birthday to him.   With the web delay on each window, let’s say that “you had to be there” to even know what song was being sung.  Of course, everyone knows that “it is the thought that counts”.  We “thought” it was great. 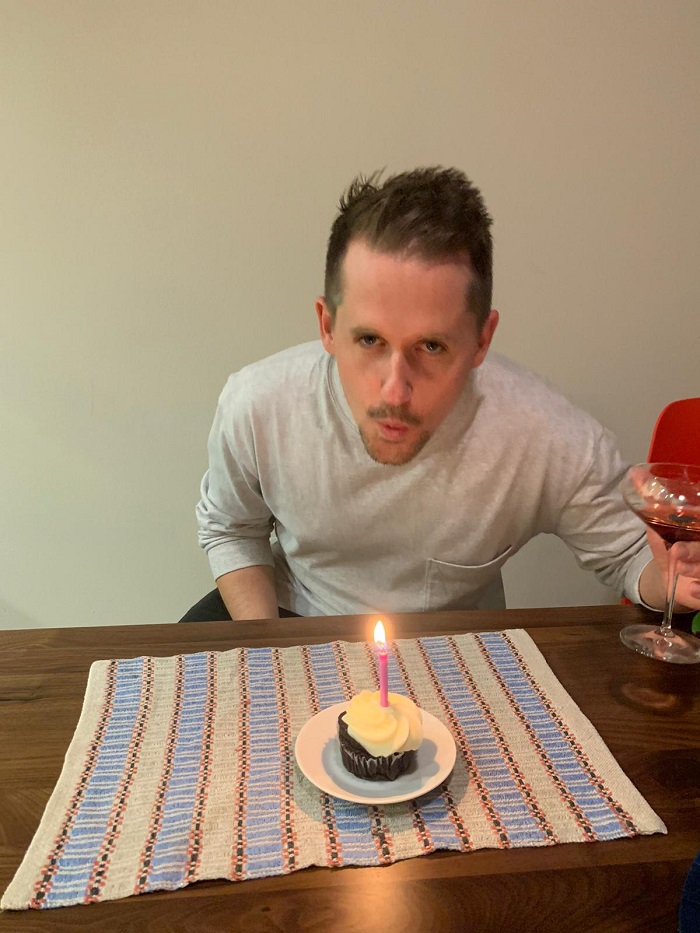 And Mila, their ever attentive husky, seeming to say “can I have a bite?”.  Wondering what that is on her neck?  A party hat?  Or is that a doggie tracheotomy? 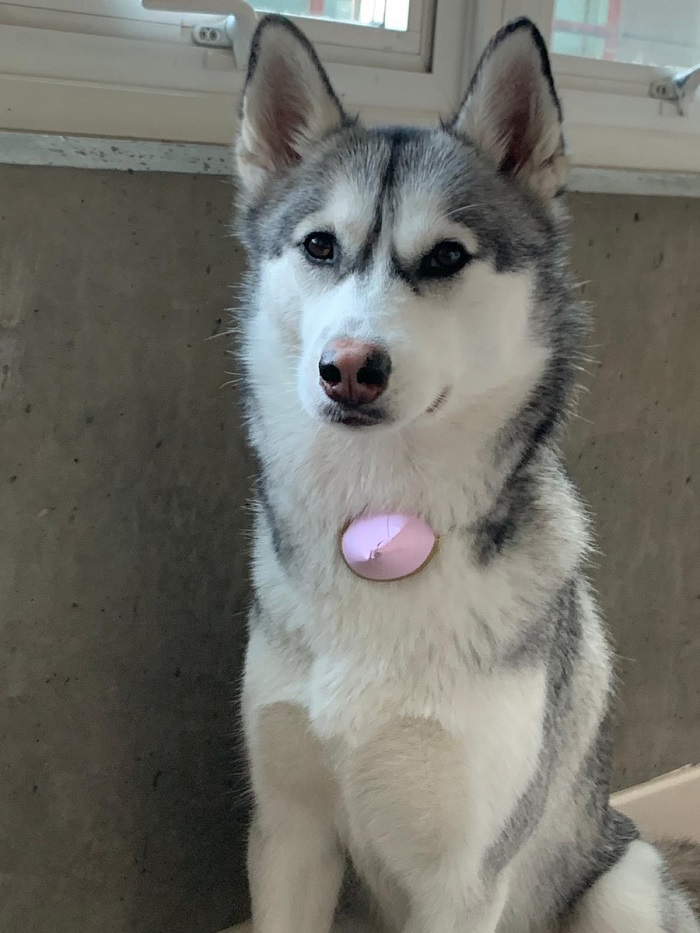 Along with much of the world, we are struggling to stay sane while confined at home, or in our case, aboard Pandora and in a very small space.  Did I say that Pandora is about the size of a generous bathroom?  “Yes, Bob, more times than we can count!”

In a feeble attempt to stay active within the confines of our now so restricted world, we have been spending time each day swimming around the boat, Brenda wearing her Apple watch, that somehow knows she is swimming, even if she doesn’t tell it.   One lap, two laps… “the wind splashed water in my eyes!  I just hate that!”  Ok, no more laps today.

Everyone is struggling to stay active given the rules that require us to say aboard except for “essential” trips ashore.  Unfortunately, some cruisers in the harbor seem to be finding an “essential need” ashore just about every day.  I hope that doesn’t end up backfiring on us all.

However, most are doing the right thing and are adhering to the “spirit” of what’s being asked of the cruising community.  This morning I saw a guy doing arm exercises on the bow of his boat using some sort of green strap wrapped around the rigging. 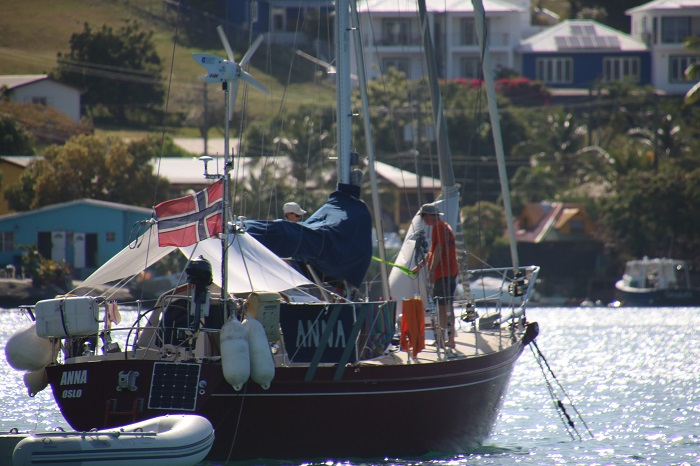 Yesterday, after nearly a week of very light winds, the trade winds began to fill in again.  This crew deployed their spinnaker to do a bit of “surfing”.  The process involves securing the top of the sail to the mast facing aft with a seat secured to the two lower corners.  When the wind catches the sail just right, up you go. 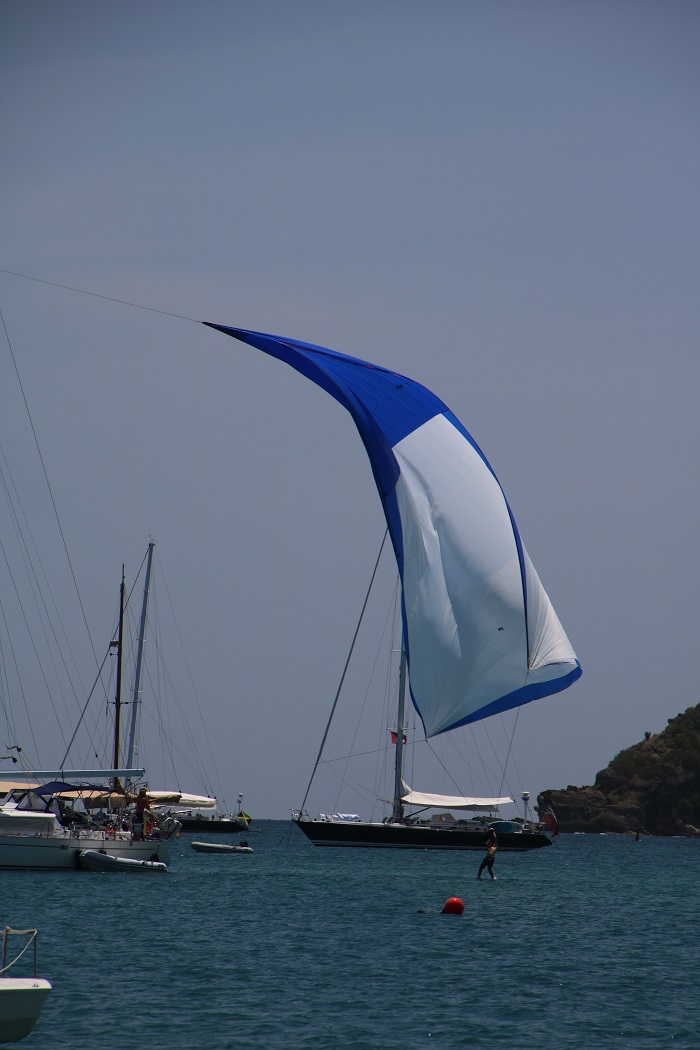 It’s a very tricky maneuver with some risk to both boat and crew.  After one quick jerk out of the water, it suddenly looked  like things might be getting out of control.   A strong gust, would put a lot of strain on their anchor and it would get messy pretty quick if they started to drag. 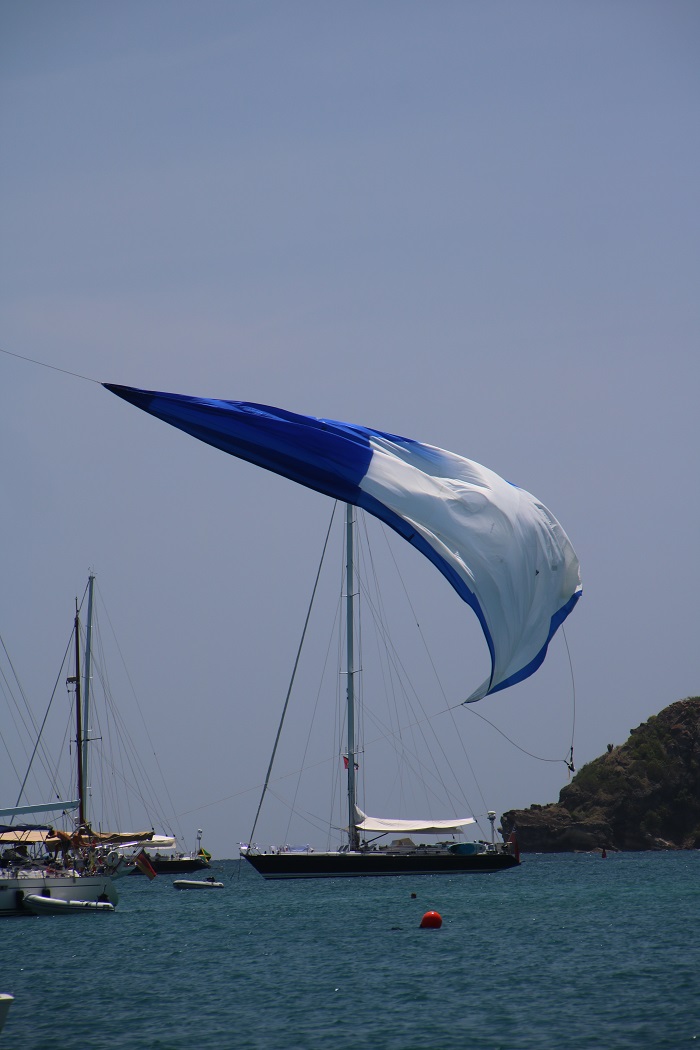 It seemed to take a long time to reel the flogging sail back into the cockpit.  “Ok, ok, enough fun for one day guys.” 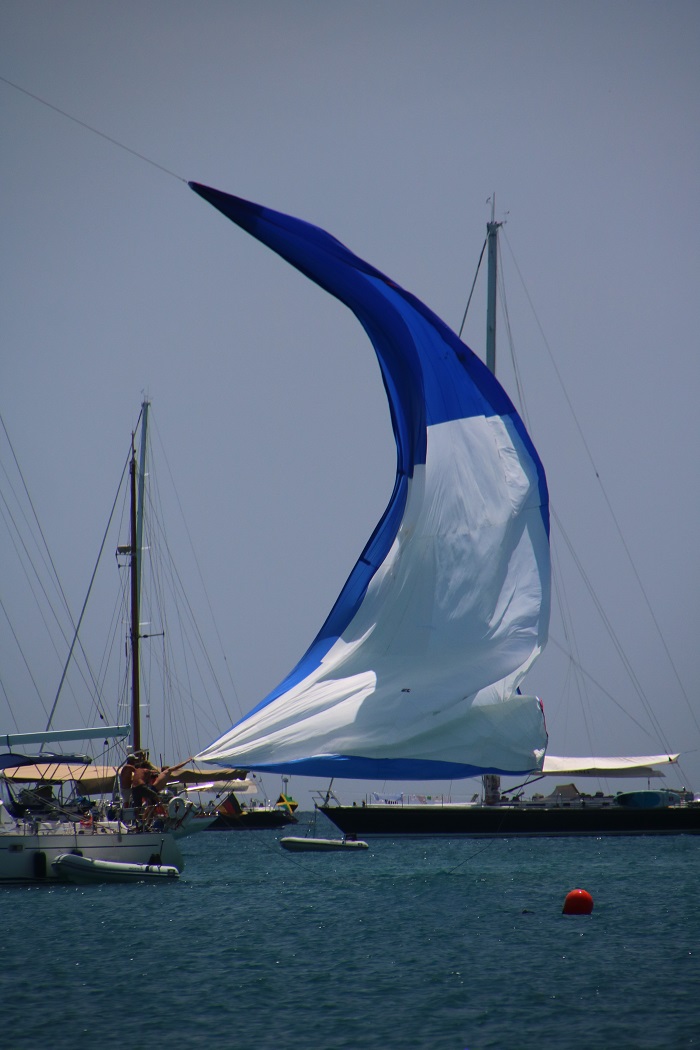 So, here we sit, not knowing how long it will be until we are able to head to the US.  It’s still too early to head north anyway with cold fronts making for challenging conditions north of the Bahamas with a constant parade of cold fronts exiting the east coast.

Yesterday I spoke briefly with Chris Parker, our weather router, and his advice to me.  “If you are comfortable in Antigua stay where you are for a month and then consider heading north when the weather is more settled.”  Sounds like good advice.   Besides, our family has said, time and time again, please stay away until things are more under control in the US, with they clearly aren’t.

With so many cruisers in the USVIs right now, all raring to go home, much earlier than they would during a normal year, I asked Chris what he made of that.

His answer, “they are assuming that the grass is greener on the other side”.   I guess that’s human nature but we’re staying here in Antigua for the time being, hoping that things will somehow get better at home.

One can always hope.  In the meantime, we’re enjoying “Zooming” from one “event” to another.  Tonight, happy hour with fellow cruisers, some local and some in the US.  At least it’s a taste of “normal” in a world that’s anything but that.

All I can say that if there was a way to Zoom ourselves home, we’d do it.  Where’s a magic genie when you need one?

2 responses to “There’s not place like home. Zoom yourself there!”