Dominica: Where nature is king and queen

Well, here we are, still in Dominca after a week, the longest we have stayed during our three visits to the island.  The last time we were here was for a short visit following hurricane Maria that devastated the island, stripping nearly everything green and leaving the mountains looking more like New England in February than the lush tropical island that it is.

So, here we are again, two years later, and what a transformation there has been.   While the forest, that covers 75% of the island still has many dead trees poking up above the new growth, the island forests have substantially recovered from the horrible damage that Maria, the category 5 hurricane, wrought.

A few days ago, Brenda and I, along with a dozen of our closest cruisers friends, hired a driver to take us around the island.  Our destinations included, a tiny family run chocolate factory, a beautiful waterfall with a perfect swimming hole in the heart of the mountain rainforest, a dip in a family run hot spring and a terrific lunch overlooking a river and yet another waterfall.

It’s not hard to find waterfalls in Dominica as we were told that the island boasts some 365 rivers, one for every day of the year.   Funny, how that magic “365” number works, Antigua supposedly has the same number of beaches.  A coincidence?

Whatever the number of rivers, the island is beautiful and what a day it was.

Our first stop, after about an hour in the bus from Falmouth, winding our way around switchback to switchback high up into the rain forest, finally arriving at this tiny “factory” tucked in among the trees with a beautiful view of the ocean in the distance. 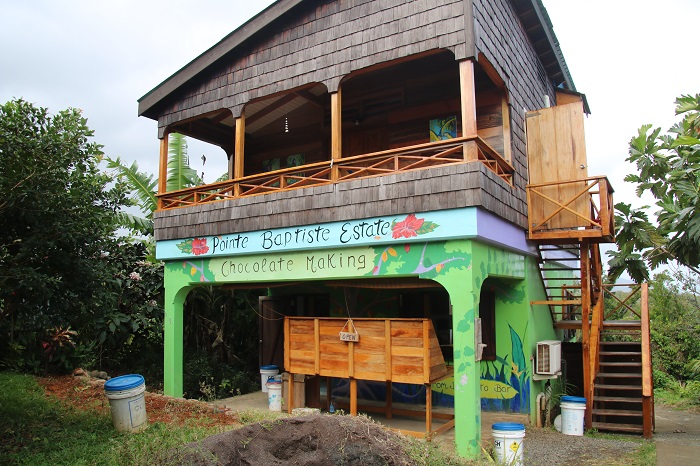 This little family run business makes terrific chocolate, all of which is sold here on the island. a total of 2,000 lbs per year, in many creative flavors.

Interestingly, the higher percentage of cocoa that is in the bars, the less sweet it is with the balance of ingredients primarily cane sugar making up the difference.  So, chocolate labeled 100% cocoa is bitter and not sweet at all and milk chocolate having the largest percentage of sugar. 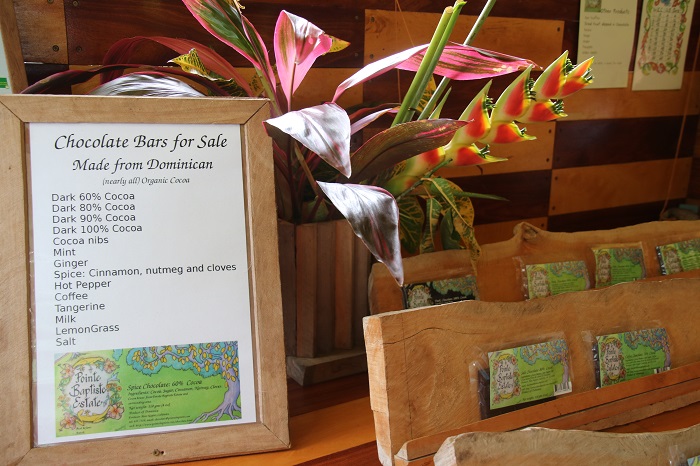 They grow cocoa beans and coffee on the property.  This is what a raw cocoa seed pod looks like.  The white soft material is sweet and covers the cocoa beans, each pod has a cluster of beans inside. 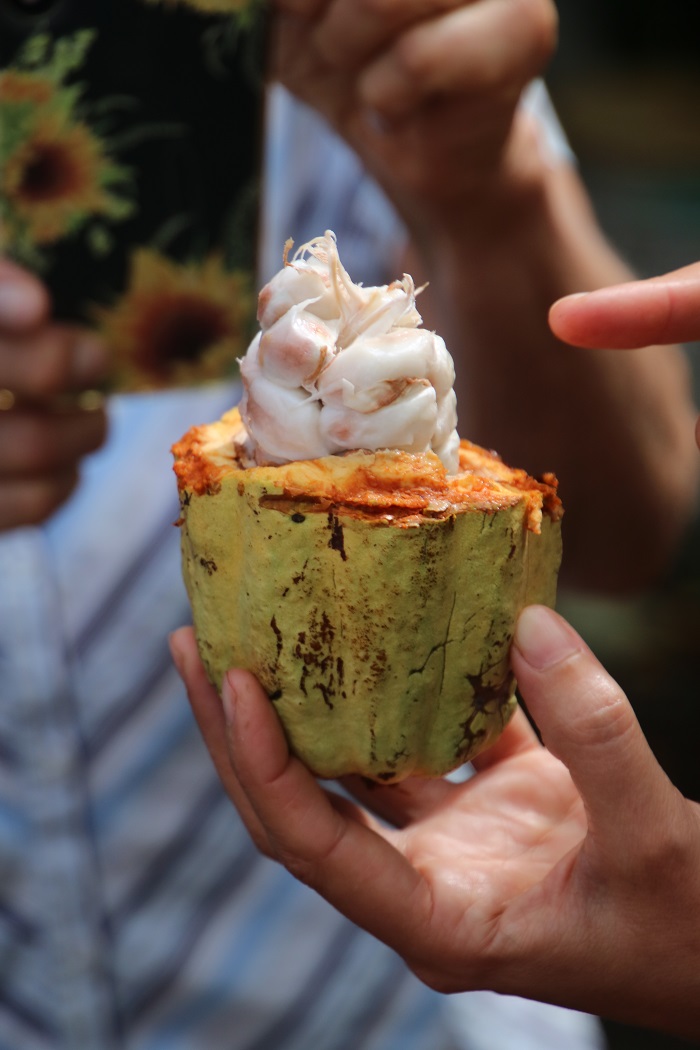 The wet raw beans are put into these wooden bins, covered with banana leaves where they are left to ferment for a several days. 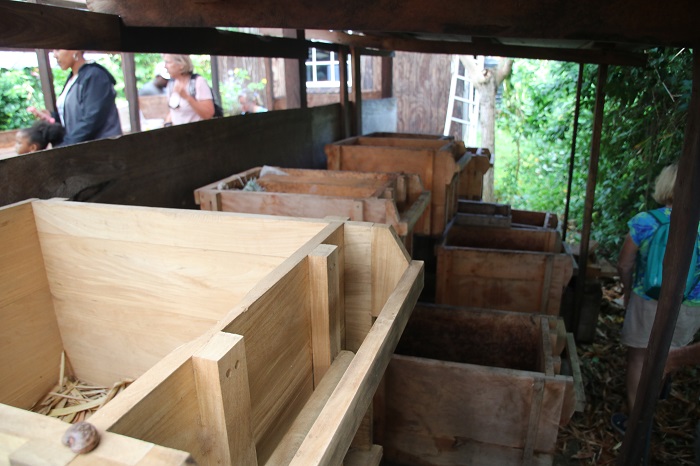 The beans are then separated from any liquid from the fermentation and spread to dry on open racks. 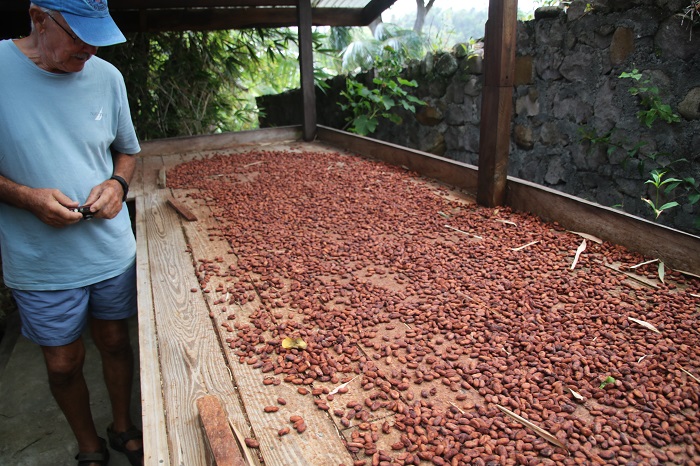 The dry but still raw beans are about 1/2″ long and already smell like chocolate. 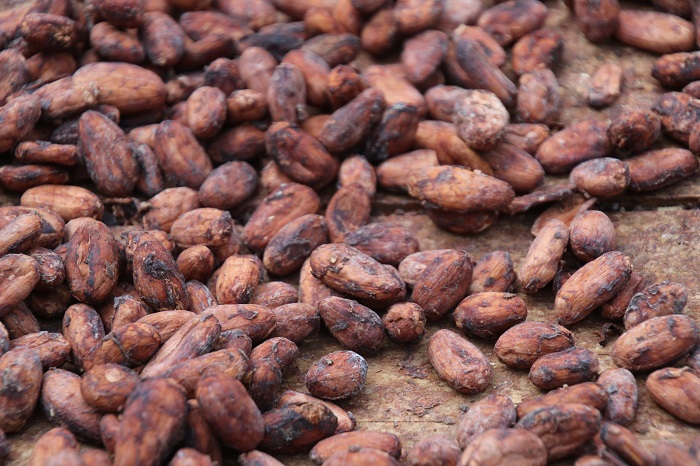 Then the beans are roasted in a special oven at, I think, 250 degrees F. 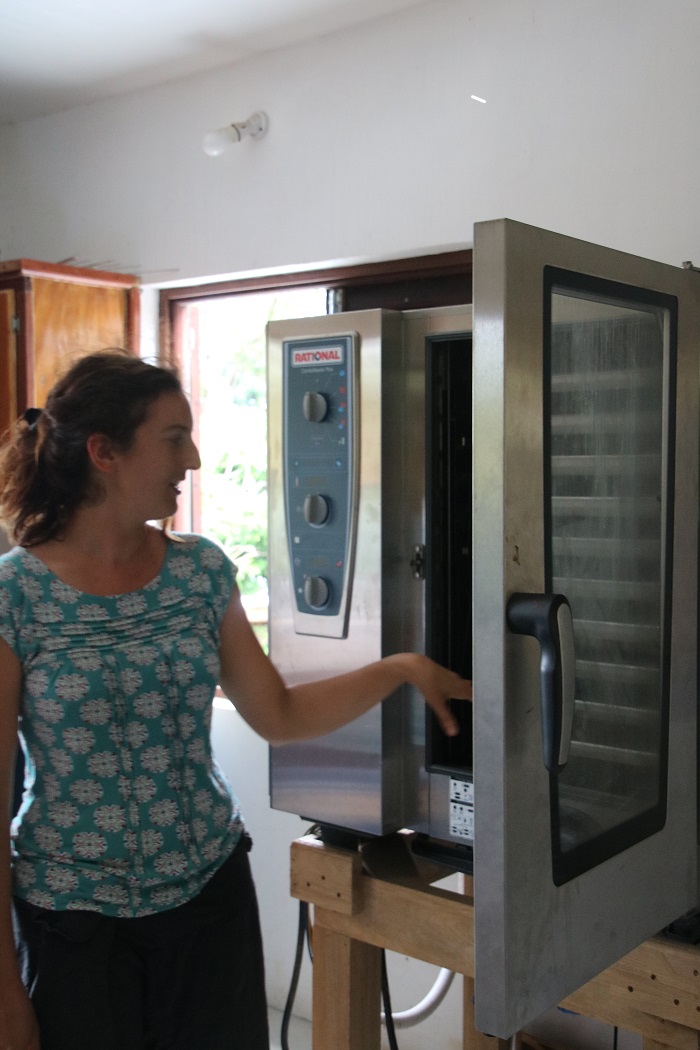 While the process is fairly primitive, it is carefully controlled by modern equipment.  I wonder if the “emergency stop” button sets off an alarm meant to keep someone from eating too much chocolate?  Hmm… 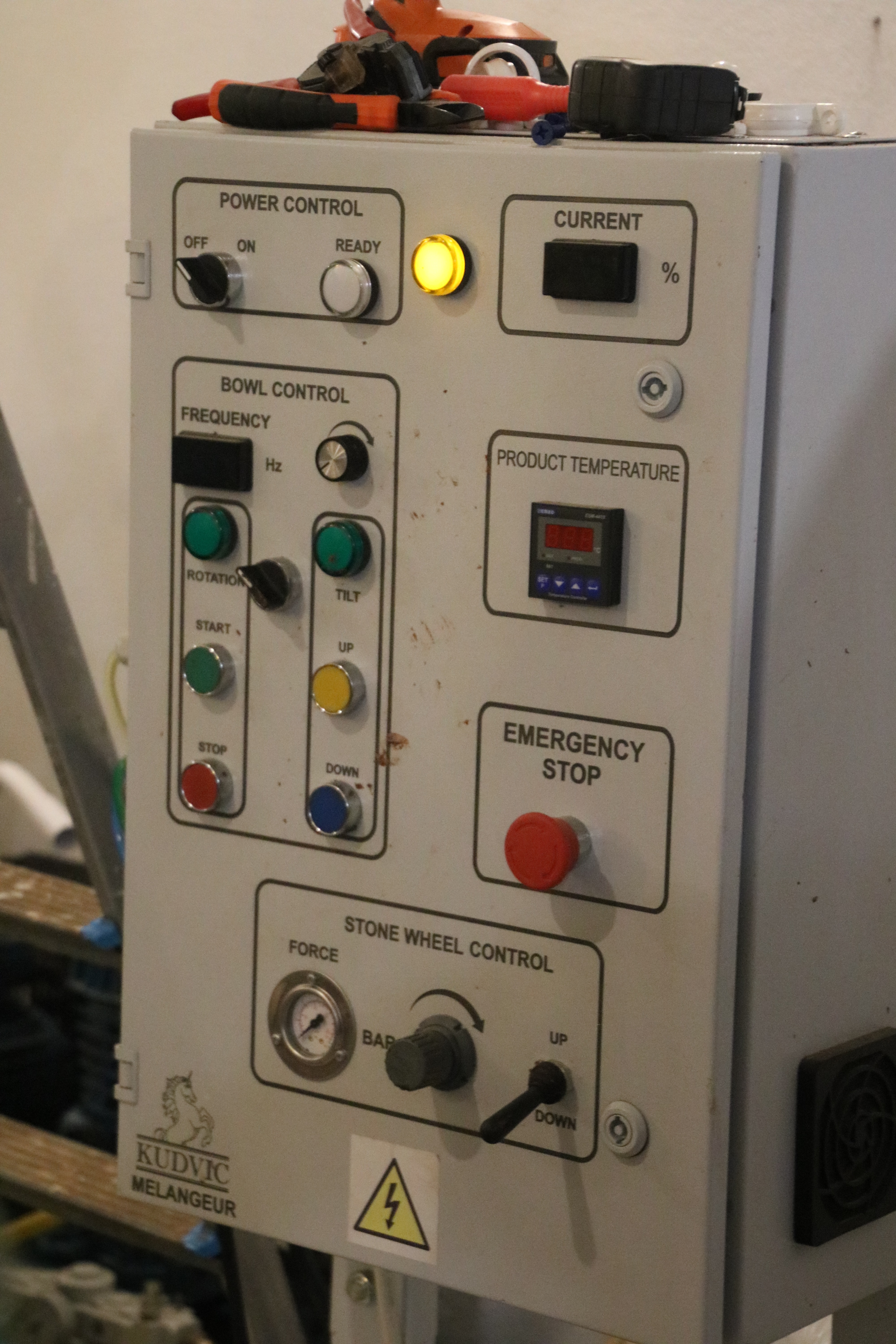 After roasting the beans are roughly cracked to separate the outer hull from the meat of the bean. 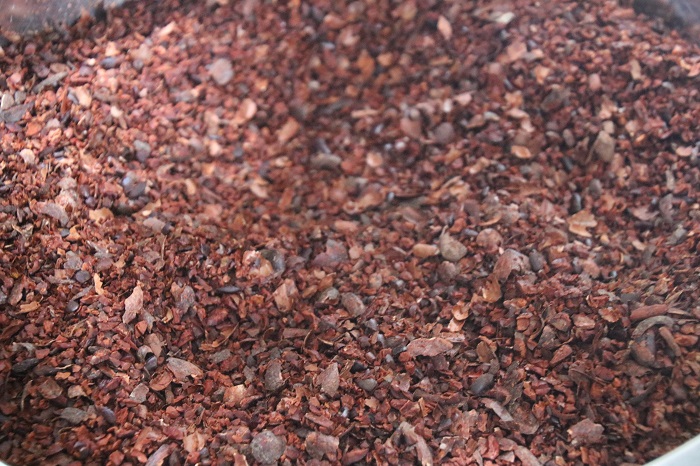 Then they are put into this machine, where air is blown into the pipe, the force of air carrying the lighter husks up and away, separating, as you might say, “The wheat from the chaff”.  It’s simple and ingenious and effective.   The “good” stuff, which is heavier, falls into the black bin and the “chaff” goes up the tube and down into the white bucket. 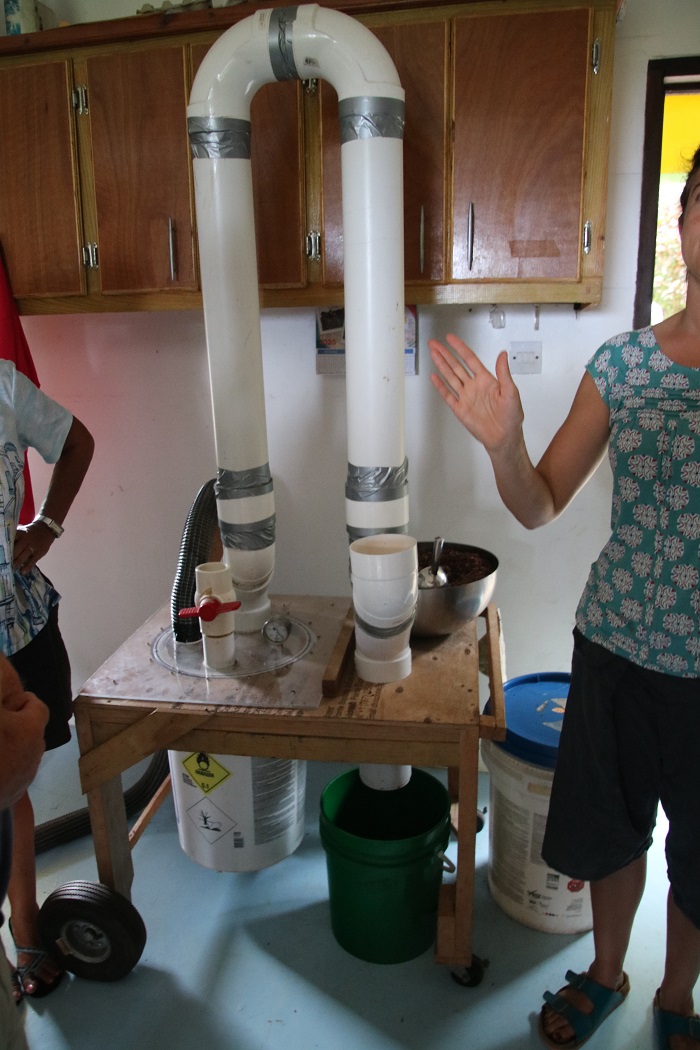 Next the “cleaned” beans are ground into a rough paste by rollers that turn around in the bucket.  At this point, they really smell like chocolate. 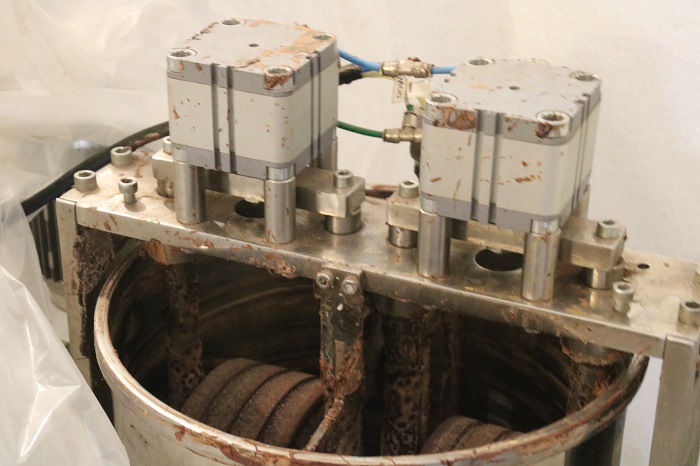 An additional step puts the chocolate into an even finer grinder/roller that smooths things out into a very smooth paste.   Finally, depending on the particular flavor that is planned, they mix in the appropriate amount of cane sugar and any flavoring that might be needed, like ginger or hot pepper, two examples.   Then the mixture is poured into molds to harden, prior to packaging and labeling. 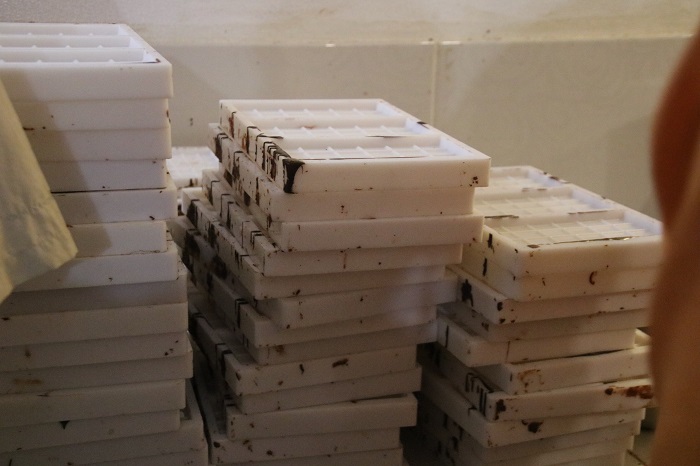 They produce many flavors and we tried nearly all of them.  Hungry for more? Unless you are in Dominca, or good friends with Brenda, your’e out of luck as their product is only available on the island.   Of course, you too can take a tour as they happily welcome visitors.

This chocolate is very much “home made” as the father/daughter owners have actually built a home above the “factory” where she lives with her boyfriend.    I was quite taken by the design of the house and tropical woods used in the construction, wood that was cut from trees knocked down during the hurricane.

The wood, and I understand that it goes by it’s local name of the Galba Tree, and looks a lot like mahogany, if a bit heavier.  While he didn’t mention it to me, it seems that this tree is fairly rare.  I purchased two 4′ long boards from him.  It’s not quite enough to make a table from but perhaps I can make some cutting boards out of the pieces.  It’s a beautiful wood. 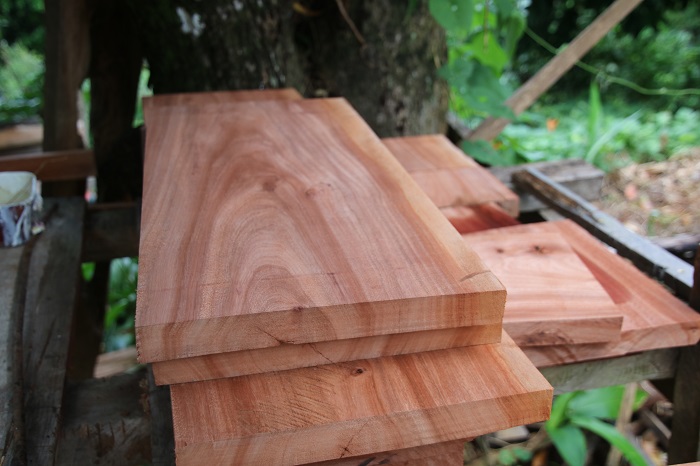 After hearing of my interest in the wood and how he built his home, I was invited up to take a look inside.   It was like visiting an enchanted tree house in the forest. 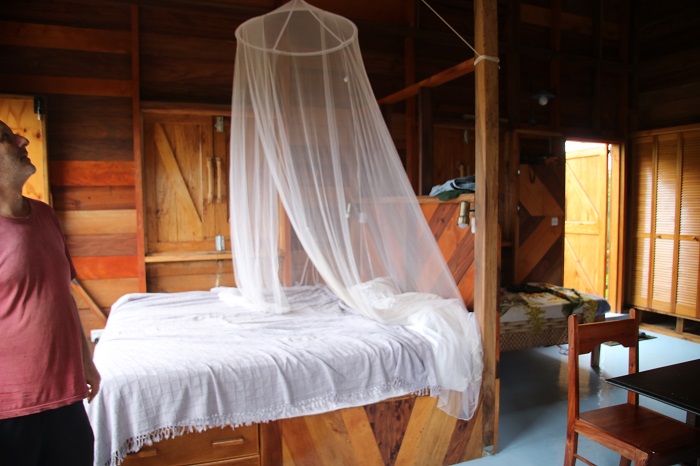 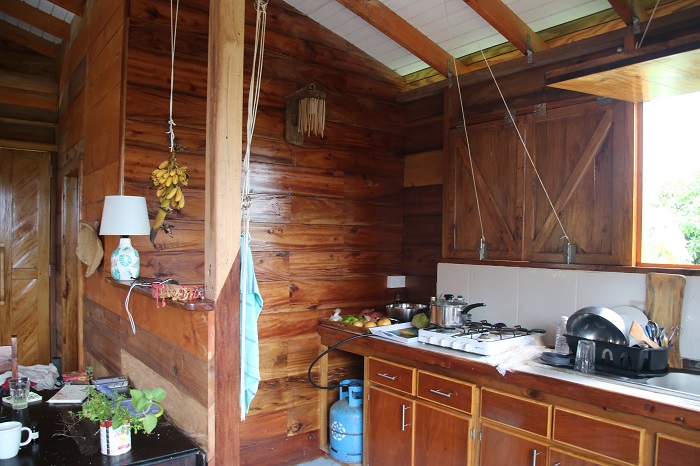 And a spectacular view of the ocean in the distance. 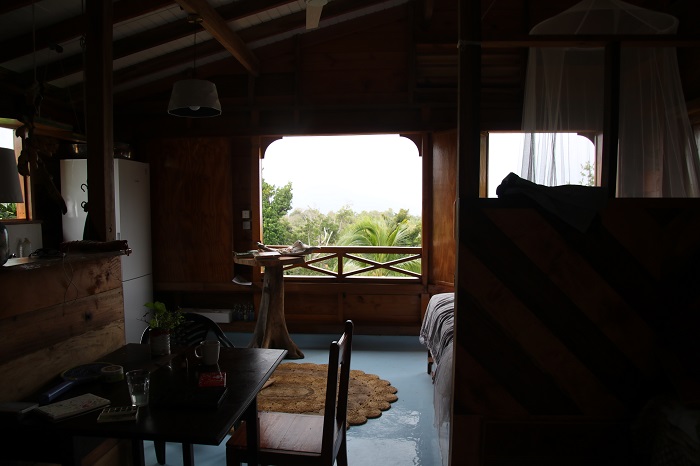 What a wonderful spot.  If you ever get an opportunity to visit, I recommend you  do.  A small business living off of the land and yet respectful of the forest which sort of sums up things here in Dominca, the nature island.

From there we headed deeper into the rain forest, winding our way, switchback to switchback, to visit what is locally known as The Emerald Pool, a swimming hole deep in the wilderness and yet still accessible with a short walk on a well groomed path. 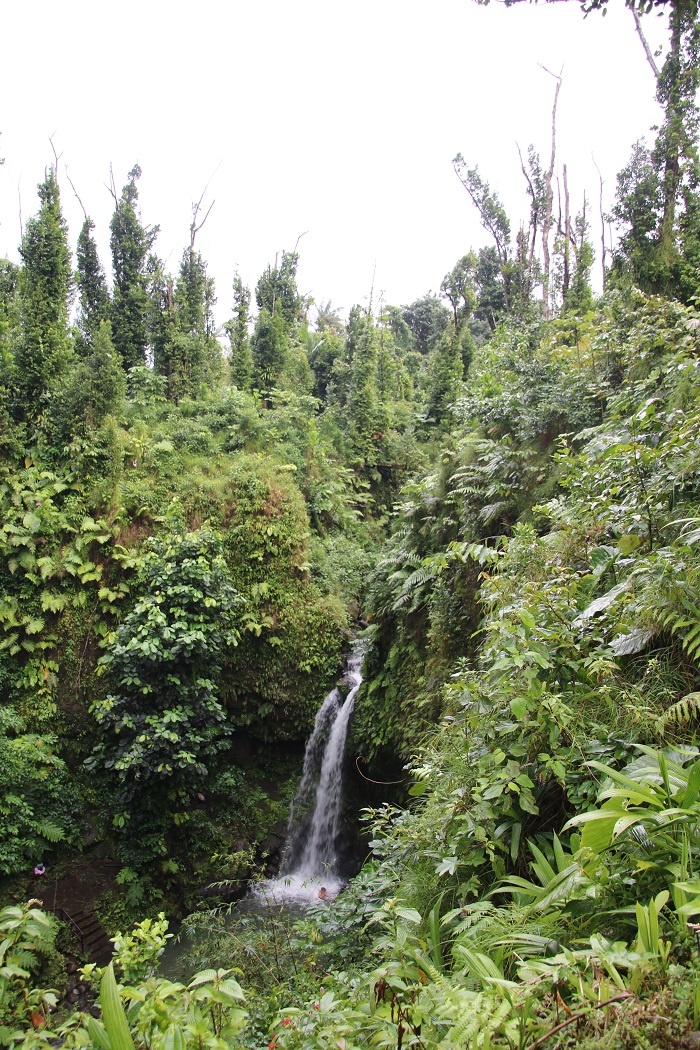 I am always struck by the lush plants of all kinds.  This tree ern “fiddle head” is much larger than it looks, the thickness of a broom handle. 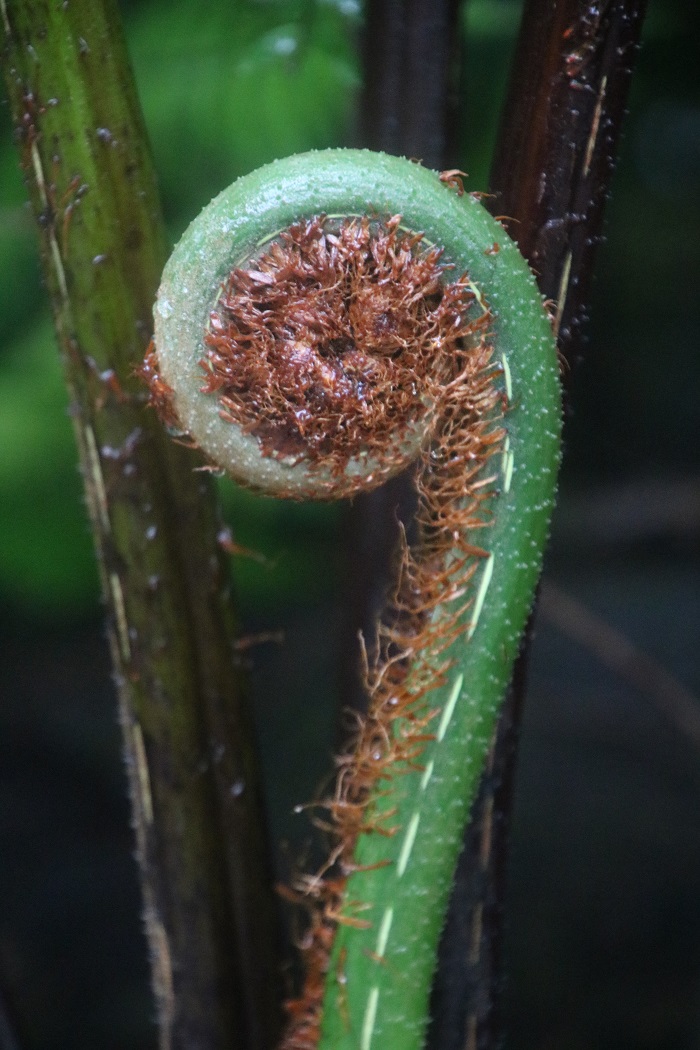 The path to the pool meanders a short distance past rapids to an observation area and then you are there. 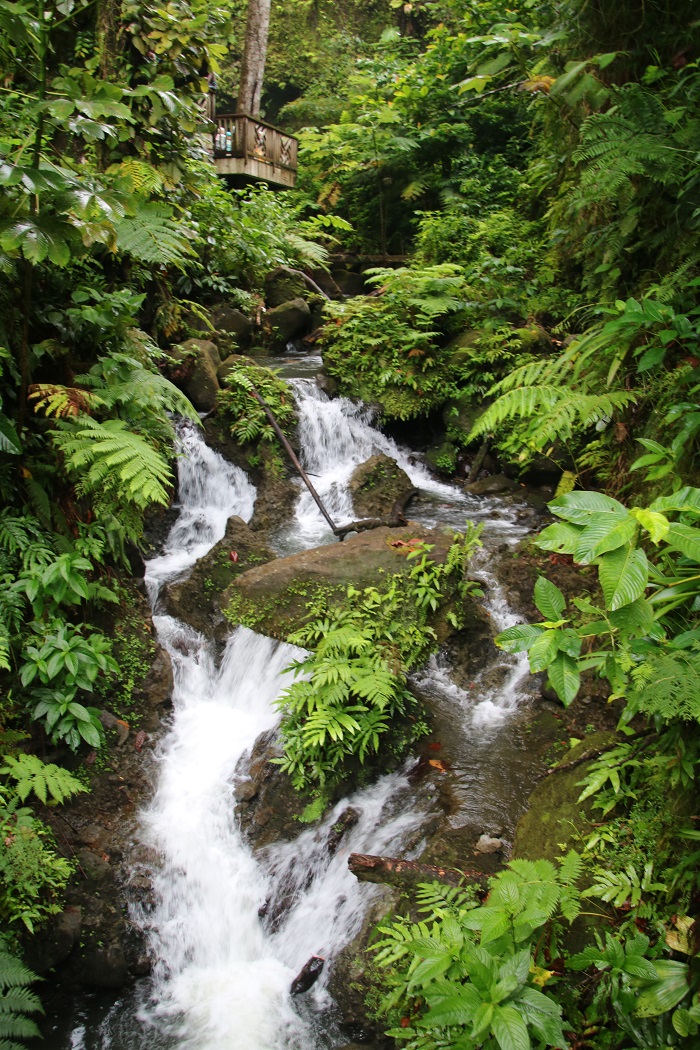 The water, while not “martini” cold, will make you catch your breath when you dip in, is a lot cooler than the surrounding air as it thunders down into the pool.

You have to be careful not to get to close to the falling water as it packs quite a punch during it’s 40′ drop and will drive you under.  Here I am, close but just far out into the pool.  The noise was deafening. 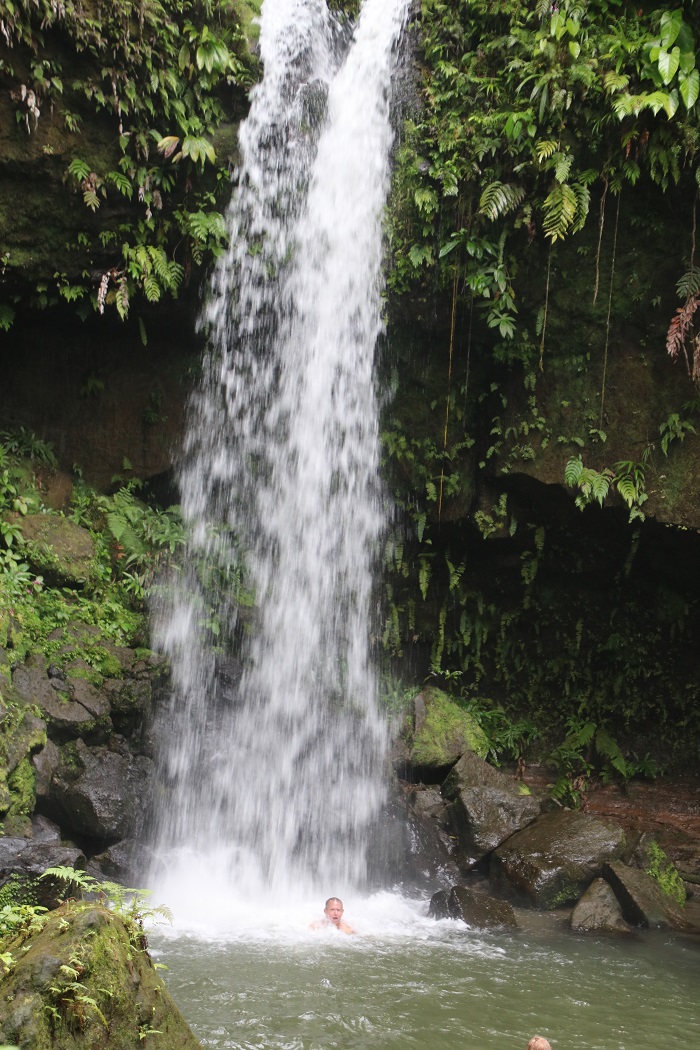 Maureen, can you hear me now?  What? 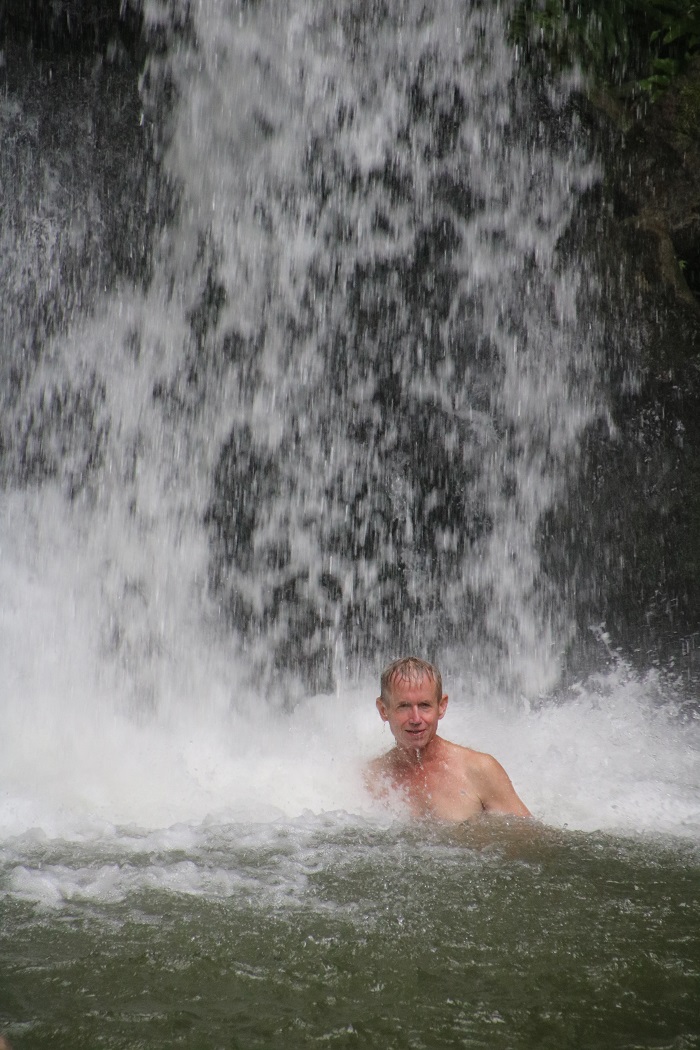 My friend Bill, looked like he was thinking about auditioning for a part in Pirates of the Caribbean, much of which was filmed on the island.  Unlike many of the cruisers on the French boats, Bill is wearing a bathing suit.  At least I think he is.  Bill?  Hard to tell… 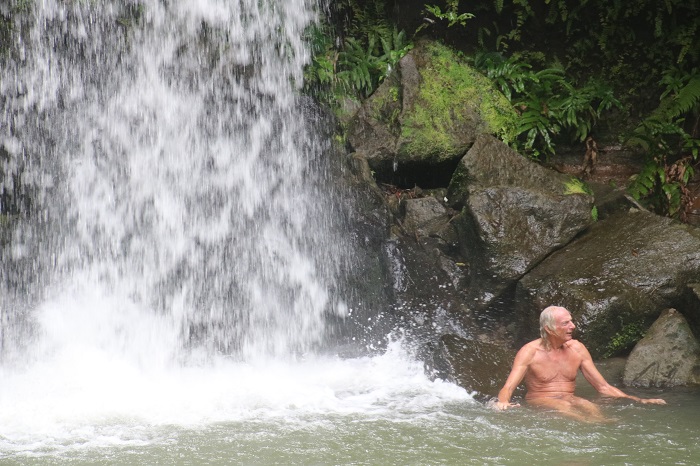 As you would expect, where there are mountains and lots of water, there is hydro power.  This setup, with a large pipe running vertically down a cliff, powers a small turbine generator.  And, with some 300″ of rainfall each year, there is a constant supply of water to run the turbines. 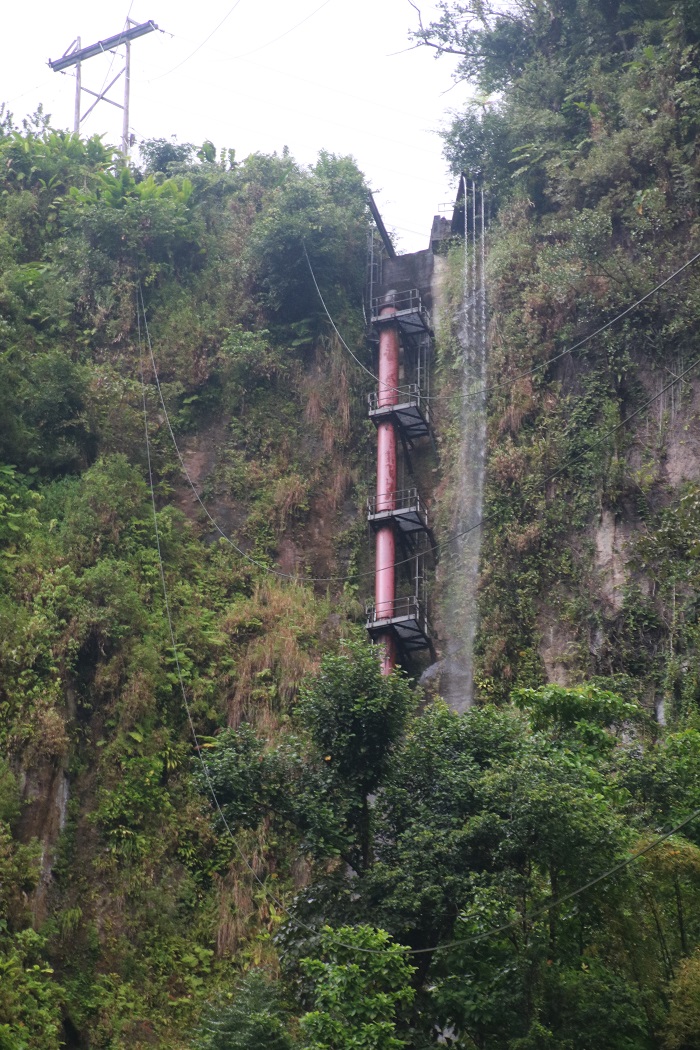 Unfortunately, in spite of the abundant sunshine, wind and water, only about 1/4 of the energy produced on Dominica is renewable.  Hopefully, this will increase in the coming years.

Our stop for lunch was a remarkable spot perched on the side of a ravine, just down the hill a bit from the Pool.  The food was quite good and the view even better. 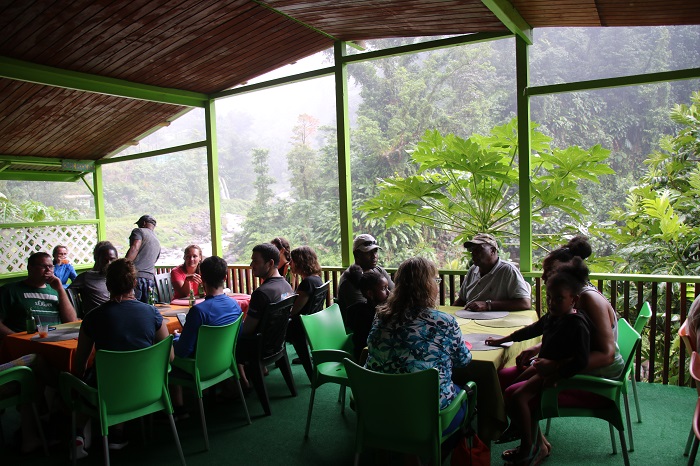 In the distance you can see the double exit spouts from the hydro generator. 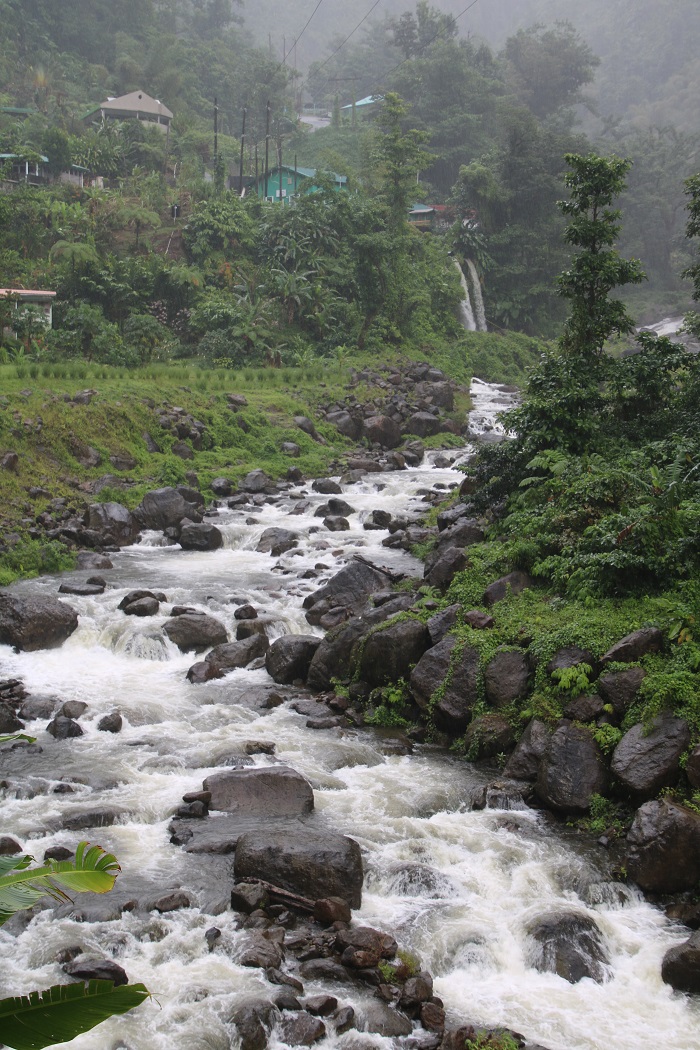 Ok, so our last stop of the day, and by this time we had driven around 3/4 of the island, was a natural hot spring.   The charming spot was run by a local family and tapped into naturally hot springs.  The island has a number of active volcanoes and what they call “boiling lakes” where the water coming out of the ground is so hot, it boils.

The water was muddy and warm, but fortunately, not boiling. 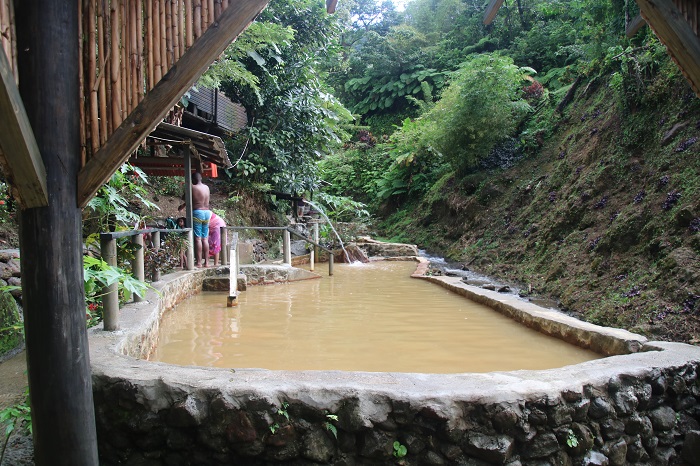 There were three pools, each progressively smaller, and each with water that was a bit hotter but still a good temperature for a tropical mountain soak.   As we were up in the mountains, where the air was cooler, it felt good to be in the warm water.   You can see the spout that is pouring warm/hot water into the pool.  The water was almost to hot to touch and quite murky.   I didn’t want to think to hard about what sort of “bugs” might be growing in the pool.  However, the pools were not crowded and had a good amount of water flowing into them so I guess it was ok.   No odd skin lesions yet…  Bill, Maureen?  Any boils breaking out?  Brenda? 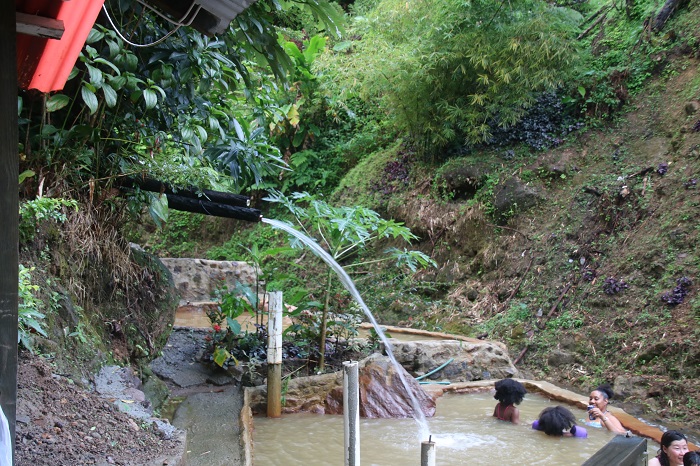 All and all, we had a wonderful day and even though we were visiting some of the most popular spots on the islands, they weren’t crowded.  No surprise on an island with only about 600 hotel rooms.

We won’t be heading south to Martinique for a few more days, still hoping for a break in the strong winds.  In the mean time, we will be spending time with our cruising buddies and in a day or two will visit a reservation where the descendants of the once mighty Carib Indians live.

These people, once known as fierce warriors, are now known for their beautiful baskets and other hand crafts and it will be fun to see how they practice these skills.  Brenda purchased a particularly exquisite example of one of these baskets a few days ago and wrote about that and other observations about the cruising lifestyle and our visit to Dominica.  It’s worth reading so click here.

I expect that we will both have plenty more to say after we spend another day touring Dominica, where the love of nature is indeed King and Queen.

One response to “Dominica: Where nature is king and queen”