>Where eagles dare? Snow Island Maine, it would seem.

>Yesterday we made a short run under power from The Basin to Snow Island.   As is so often the case with travel in Casco Bay, we headed nearly 5 miles back to the Gulf turned a bit west and went another 5 miles north and up to Snow Island.  While we covered nearly 10 miles we ended up only about 1.5 miles from Cundy’s Harbor where we had started.  However, as is so often the case in Maine, the environment was very different.   Fishing boats were much less in evidence and it was clearly a place dominated by summer folks, or “from away” as the locals would say.

One local, perhaps viewed as “from away” by some and a resident of Snow Island for many years was Dodge Morgan, successful business man and one who was the first American to sail solo around the world non stop in only 150 day in 1986.  The previous record, with stops, took over twice that amount of time. Dodge purchased Snow Island in the late 80s and build a modest compound of three buildings on the property. Particularly notable, given all of the huge homes on the water these days,  is the fact that the compound is indeed modest in spite of clearly having the resources to build a huge monument to himself.   His plan was to build something that blended into the landscape and he commissioned the architect that designed the Maine Maritime Museum to design it for him.  The work won an award in 1999 from the Maine chapter of the American Institute of Architects, with the work described by the judges as “a triumph of programmatic virtue in a natural setting that demands nothing less.”  You can learn more about Dodge’s home in this article from the Boston Globe.  Interestingly, the buildings can hardly be seen from the water and are tucked into the landscape.  Very nice.  The article makes it sound just wonderful.  Sadly, Dodge died last year.
Dodge’s voyage on “American Promise” was the subject of a book by him that is worth reading and it clearly showed that he was not a man to be underestimated or messed with.
It seems very fitting, given the area’s famous resident,  that one of our first images as we approached Snow Island, where we planned to spend the night, was a pair of Bald Eagles drying themselves after a passing shower.   I have to say that to see such a powerful bird up close was quite moving. 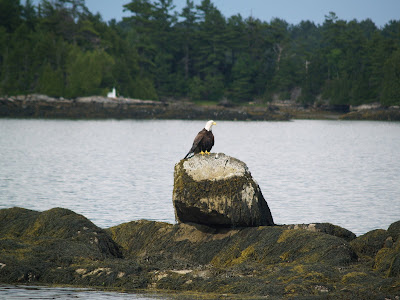 On our trip over we were hit by an impressive thunder storm and after anchoring, another passed by to the north.  What dramatic clouds and a display of the raw power of nature. 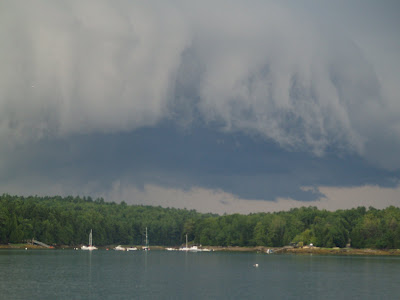 The light was just fantastic and a great way to show off yet another eagle sighting.  Note it’s really small, but the dot in the tree y itself to the right is an eagle.   Really, trust me on this.  It’s not too often that you can see eagles but to see three in a short time is really amazing. 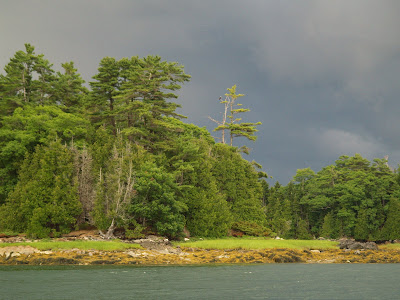 We are still planning a trip up to Bath on Friday for a few days but for now Snow island is a great place to be.
This entry was posted in Uncategorized. Bookmark the permalink.