In the summer of 1926, when he was 78 years old, Captain Nat Herreshoff launched what would be his last schooner, the 64′ on deck, Mary Rose.

What sweet lines if the word “sweet” applies to such a powerful sailing yacht. 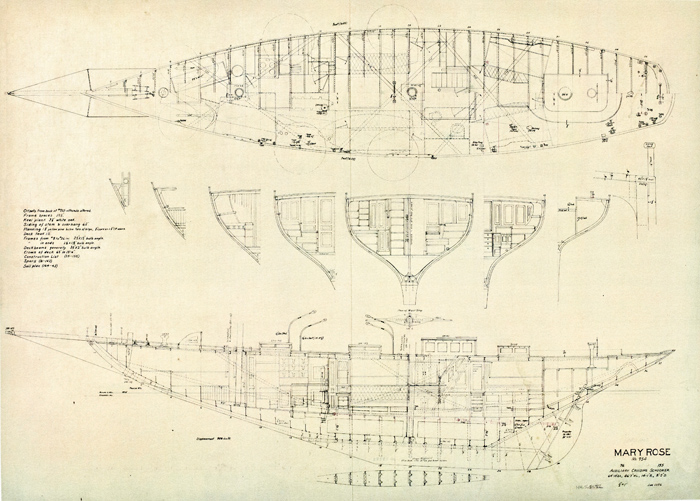 And even more beautiful under a full press of sails. 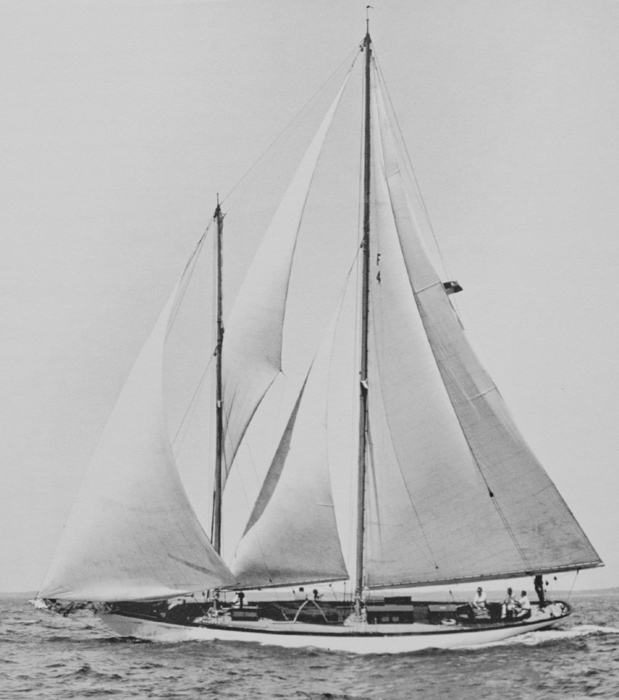 Mary Rose has had a number of owners over the years including Hugh Hefner, who used her as a set for a 1959 issue of Playboy.  She was called Gallant at that time. 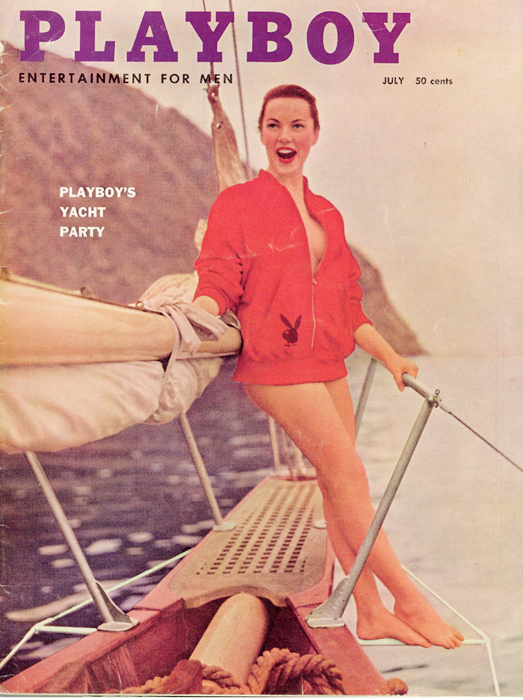 Mary Rose is very likely in way better shape these days than the “bunnies” that spent time aboard her nearly 60 years ago.

There have been some bad moments in her past as she was badly damaged in the hurricane of 1938.  Fortunately,  she was rebuilt to sail another day, unlike so many yachts that were lost in that terrible storm. 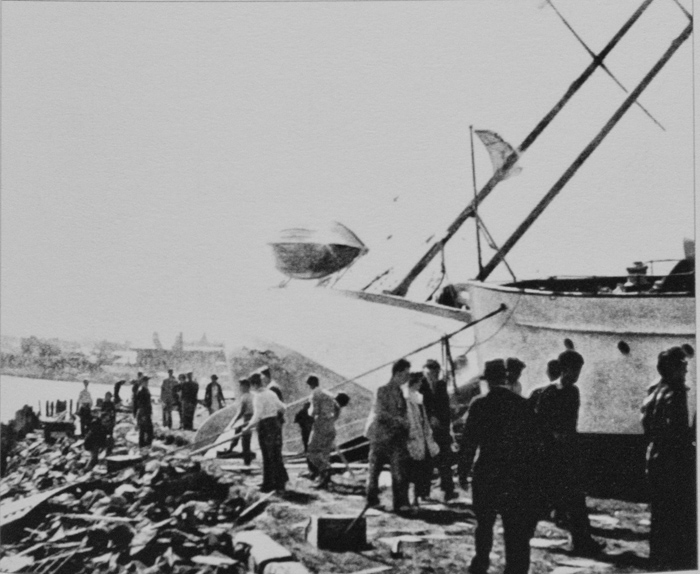 Today she lives a somewhat less exciting life full time in English Harbor, Antigua where I spent time aboard with her owner Gerald.   I had been admiring Mary Rose for a number of years as she swung on her mooring off of the Admiral’s Inn and had wondered how I might get aboard for a look. 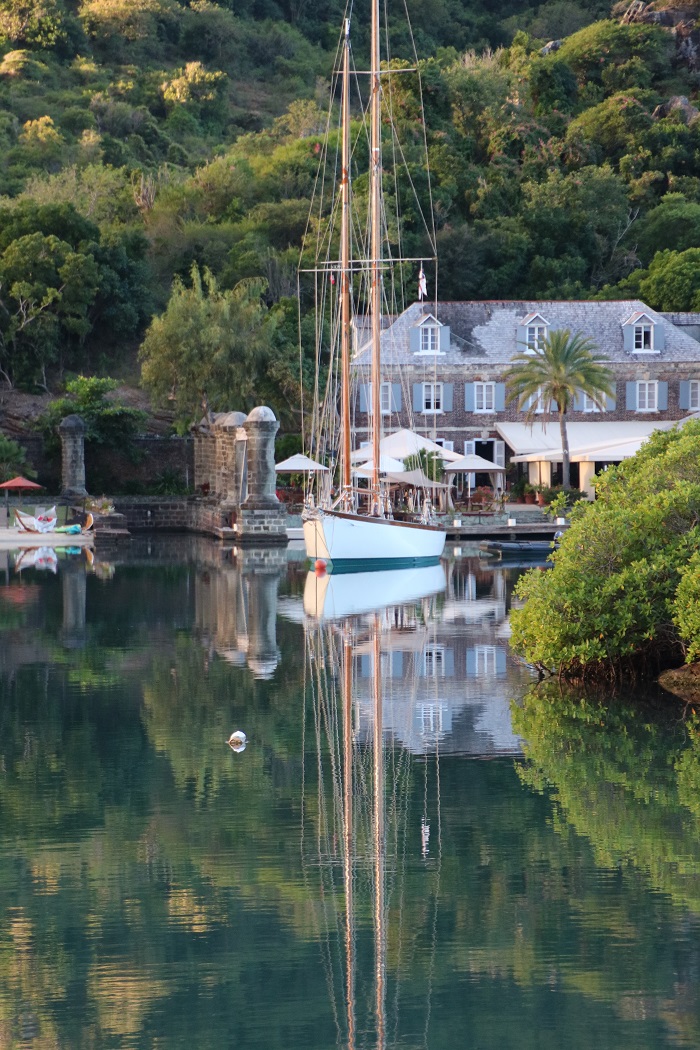 As luck would have it, Gerald is a member of the Royal Navy Tot Club of Antigua and Barbuda, a group that I am a member of and have written of many times.

I approached Gerald and we spent some time talking about his schooner and fortunately he agreed to host me for a tour.   We set a time to meet.  I was thrilled.

As we approached, her “royal” pedigree shows with the graceful curve of her bow. 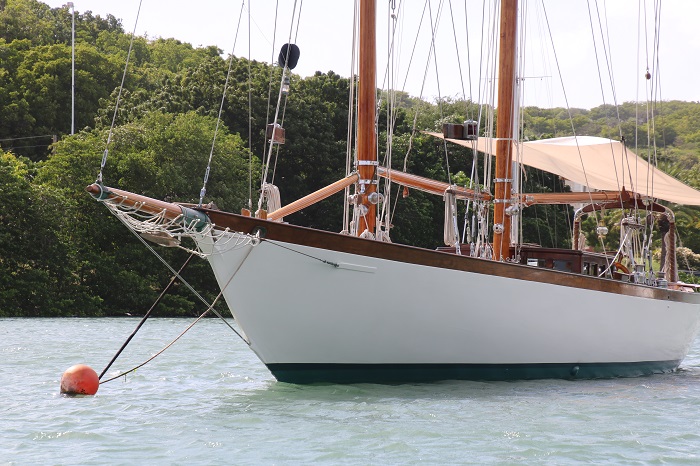 Gerald keeps here in Antigua full time and stores her, during the hurricane season, in what might be best described as concrete bunker designed to withstand hurricane force winds.   It is in her cocoon that a long list of off-season chores are done to keep her looking new as she prepares to enter her second century.

So, where should I begin?

Perhaps a good place to start is in the cockpit with her lovely wheel and binnacle.    Note the nod to the modern, her lovely brass lamp has been refitted with an LED bulb. 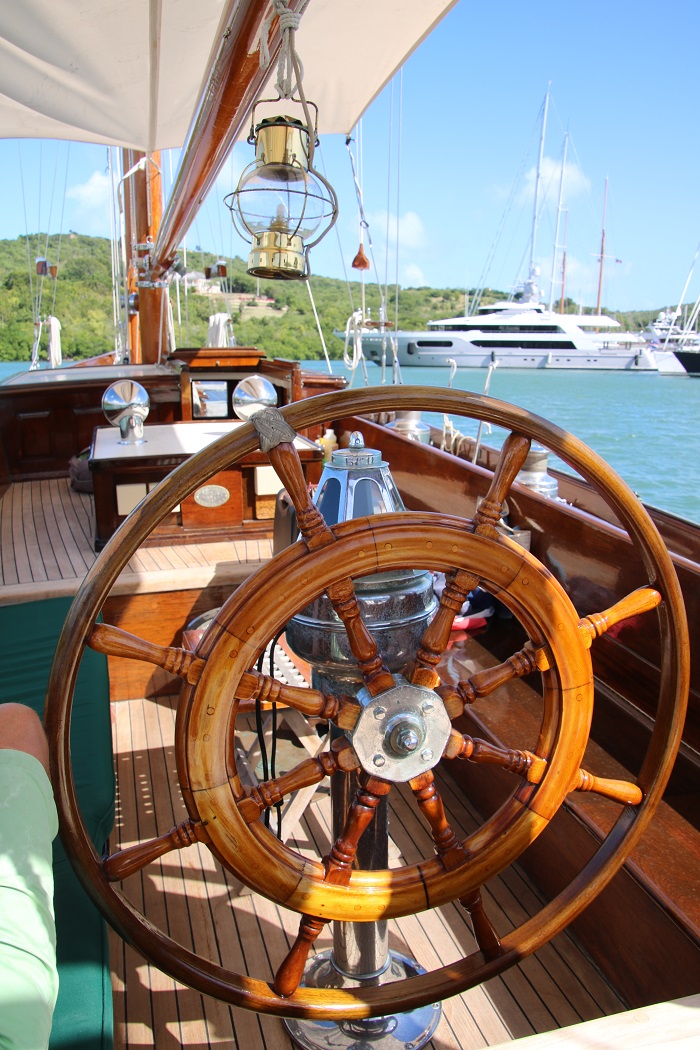 And the original builders plaque commemorating her as design #954. 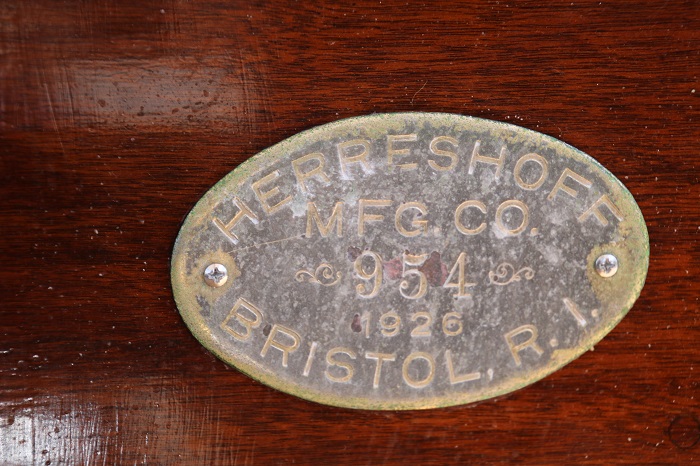 How about these beveled port lights, original of course. 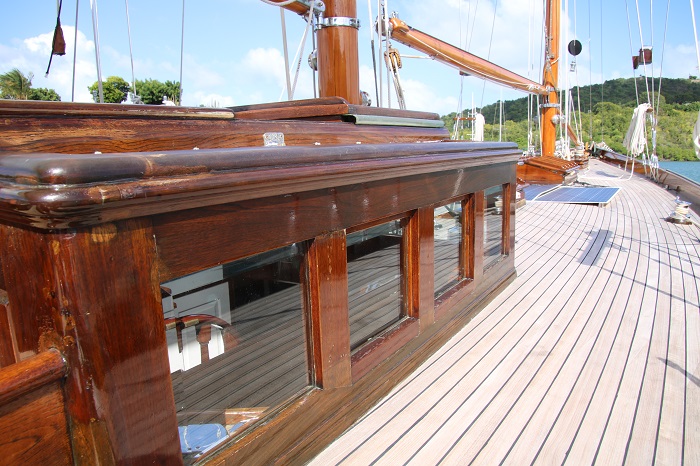 And, as you would expect, beautiful deck hatches, worthy of any proper yacht. 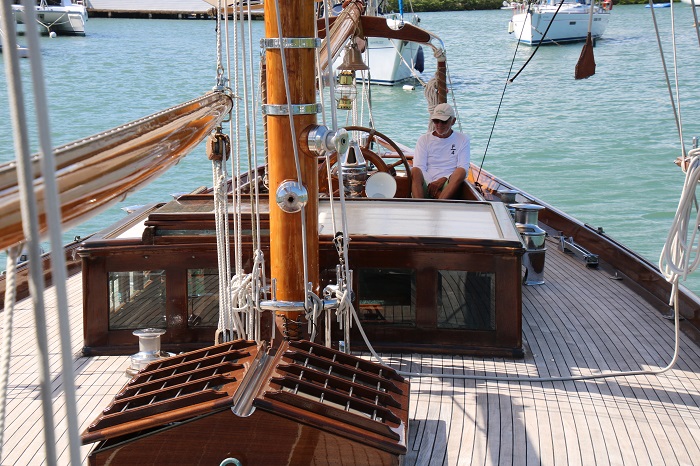 Her hardware, and it’s all original, has been refurbished over the years. 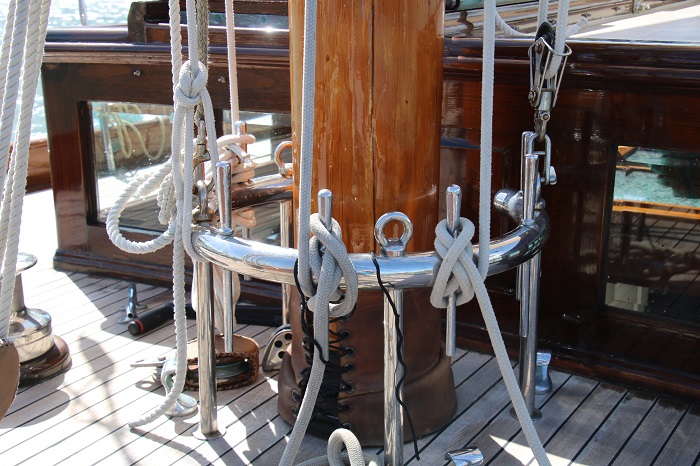 The goose neck, with it’s interesting vertical bar is worth noting.  When the sail is hoisted, the boom raises up to the top of the slide. 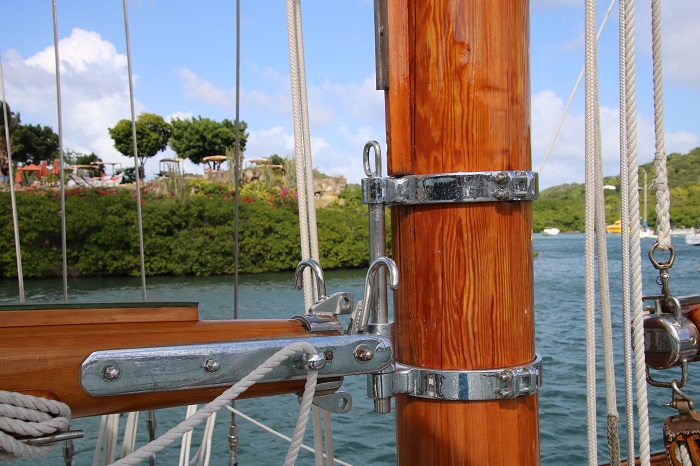 Gerald was proud to show me the recent scarf joints on the boom where there had been some decay.  It was beautifully done with perfect hairline glue lines. 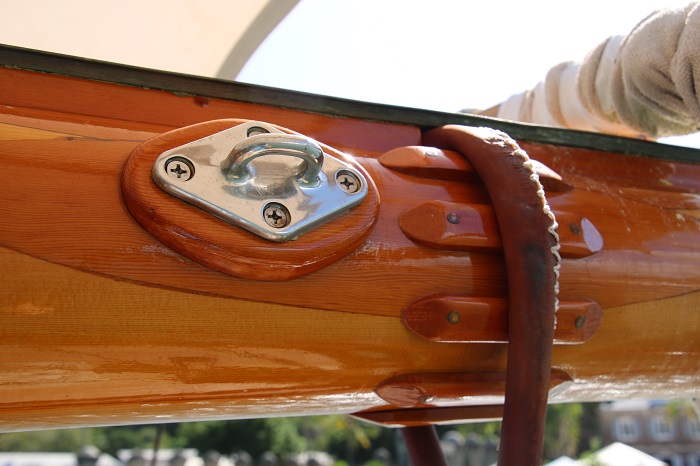 Everywhere lovely leather covers for shell blocks and covering whatever hardware might mar the decks, varnish or paint. 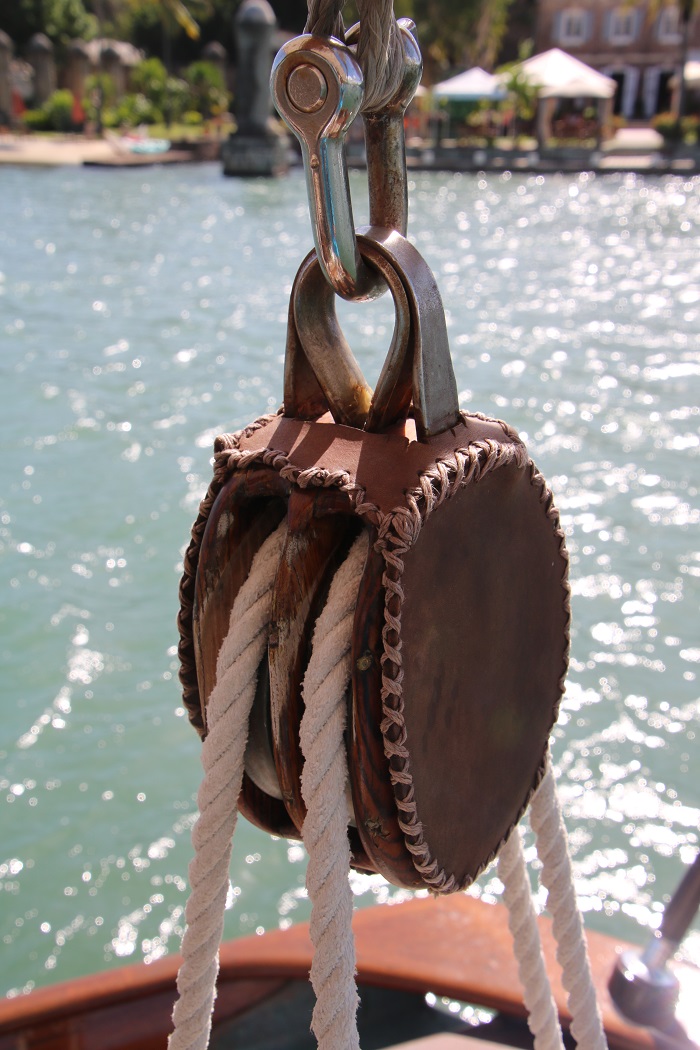 I was taken by what must have been a very innovative piece of hardware on her mast track to hoist the storm sail. 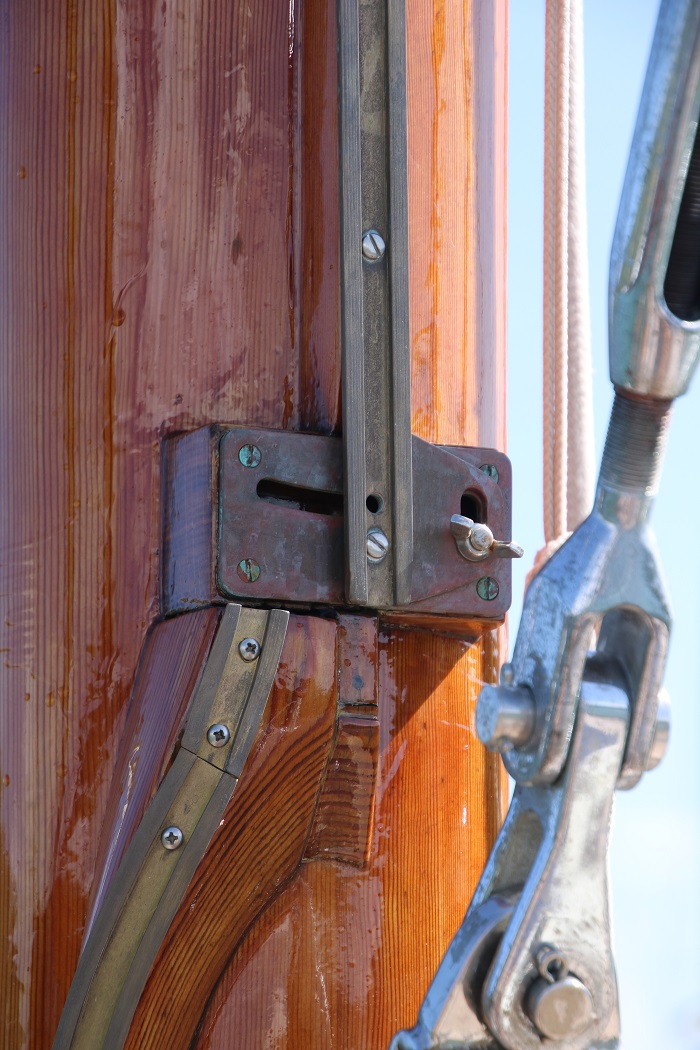 One departure from the original designed to make here easier to sail short handed, was the addition of a boom-kin.  Of course, Gerald consulted with experts at the Herreshoff museum in Bristol RI where he sits on the board of directors.   It’s a lovely addition and surely Capt Nat, always the innovator himself, would have approved.  This change made it possible to remove one of the two sets of running backstays, an important simplification. 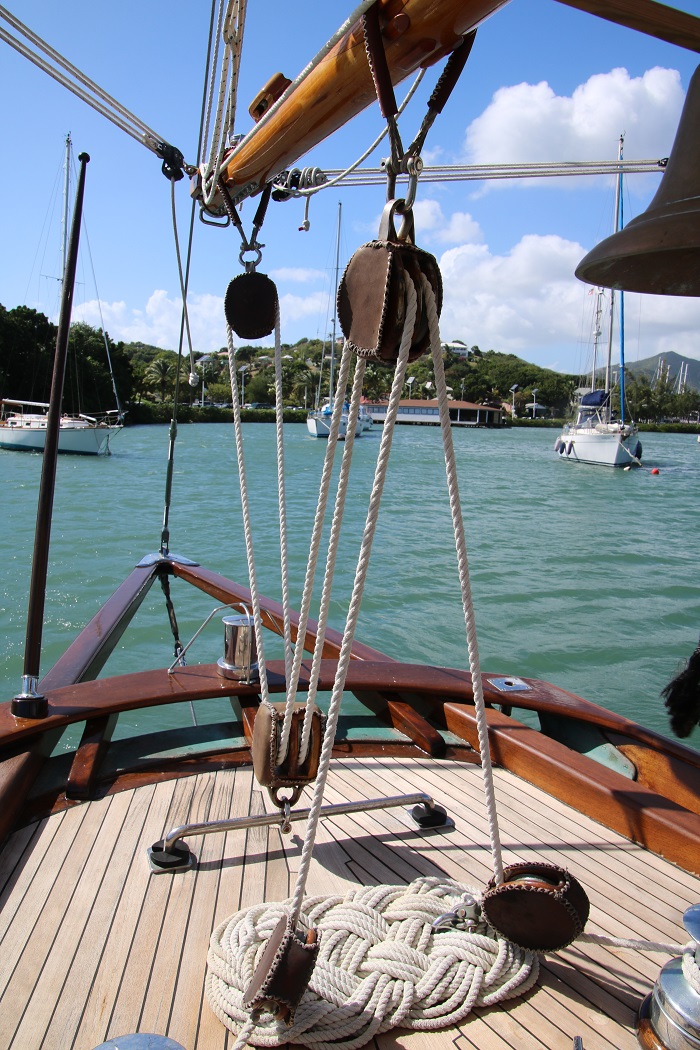 And, on the pointy end. 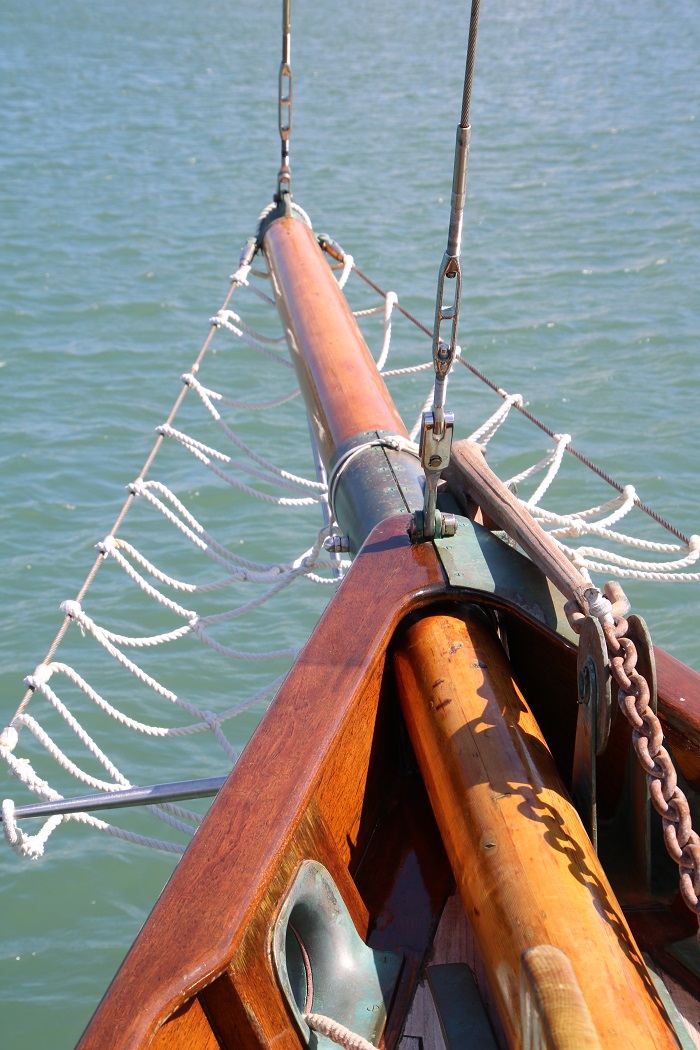 As you head down below.  What a banister and the classic “Herreshoff interior” white panels with varnished wood trim. 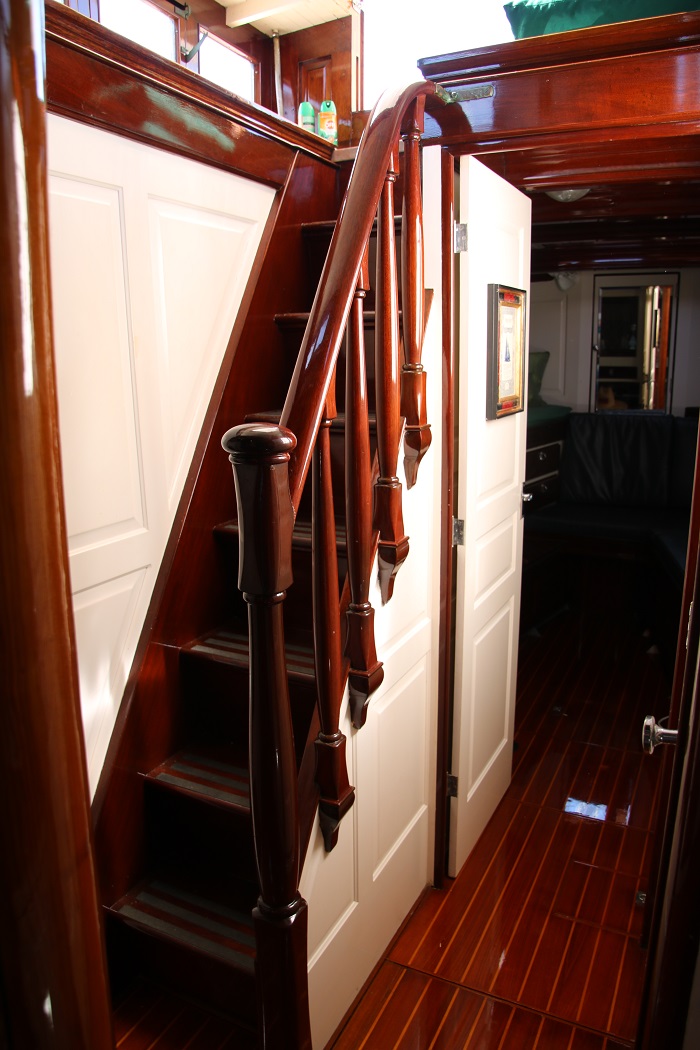 Wonderful glazing on the interior cabinets  in the main salon. 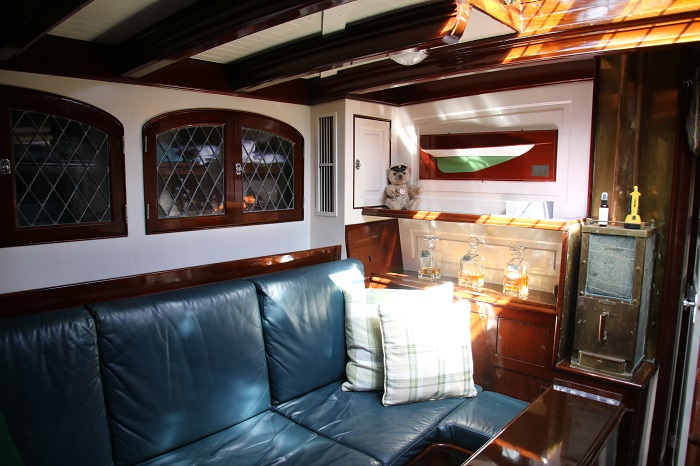 And a commemorative print when she was launched way back when.   However, no sign of that 1959 cover shot. 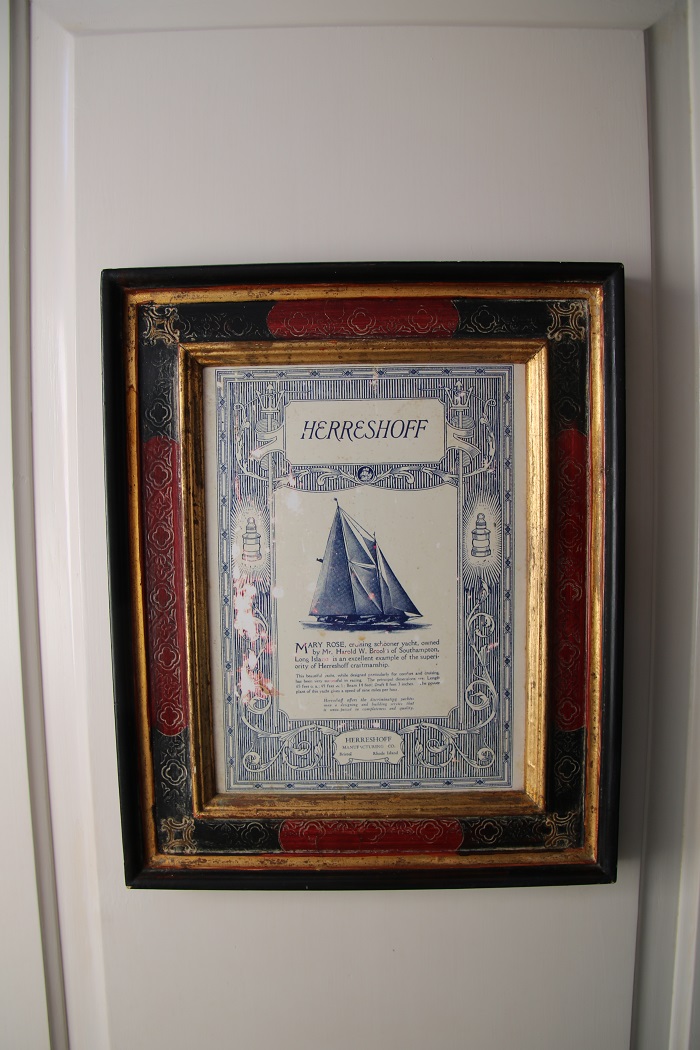 A very nice, functional galley.  Of course, with the modern conveniences of generator and refrigeration to keep things civilized when cruising. 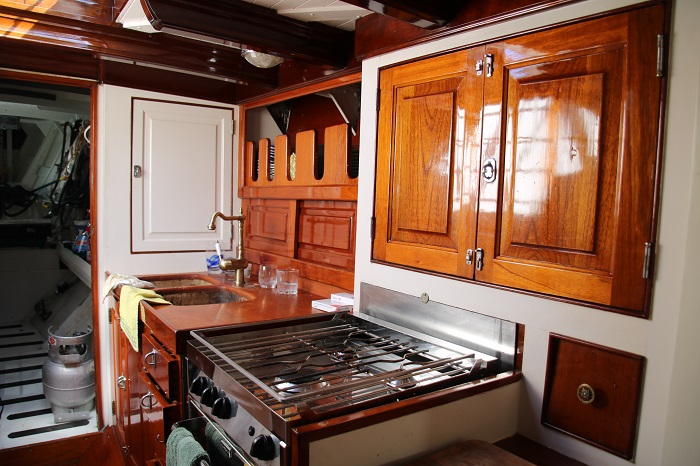 It’s clear from the stuff stored in the forepeak that she is a yacht that is used and not some sort of static museum piece. 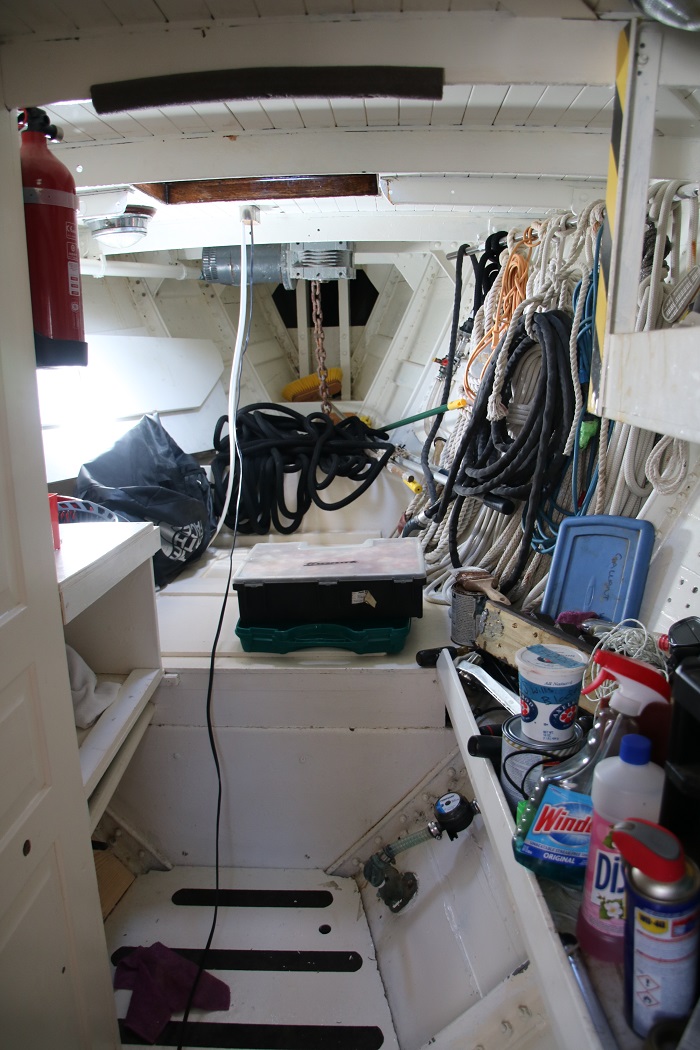 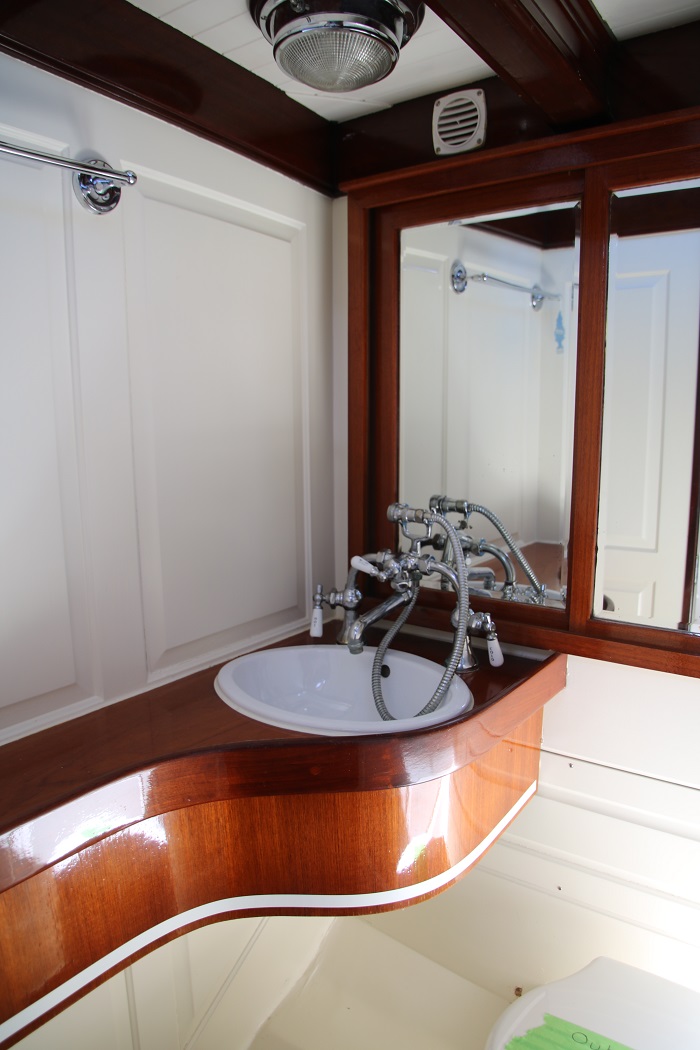 A very nice master cabin although I expect it is a bit stuffy in the tropical climate. 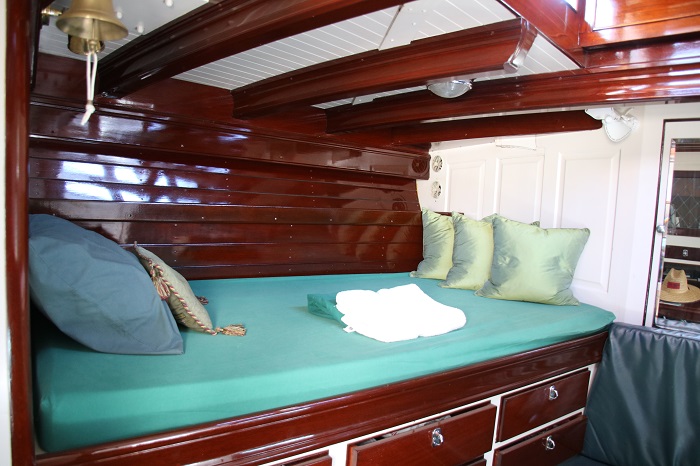 All and all, Mary Rose is a proper yacht with a caring owner and it is clear that he is committed to bringing her into her second century in grand style.

The very last schooner launched by the Wizard himself.

If you are interested in learning more about this remarkable yacht, check out her website from which I borrowed some of the photos in this post documenting her early history.

I am told that there are some great videos on YouTube but they appear to be blocked here in Guadeloupe.