In Hampton and (mostly) ready to go! Getting excited!!!

I arrived in Hampton on Friday morning at 07:30 with my crew Hank after an uneventful run from Annapolis.  There was hardly a breath of wind so we motored the entire way.  It was a pleasant overnight run and surely better than slogging into a strong southerly which is what we have today.   We met up at BWI where I returned my rental car, did a bit of last minute provisioning and were able to shove off of the dock and get underway around noon for the 120 mile run to Hampton.

So, after months of preparation I am finally here and nearly ready to go.  Actually, if it was time to go, I wouldn’t be exactly ready as I am hard aground in mud.  I anchored here instead of going into the marina only to find that the wind direction put me into the shoaling area of the harbor which is tight at best.  Never mind though as the bottom is soft and while a bit more bottom paint is showing than usual, she will float off in a few hours. 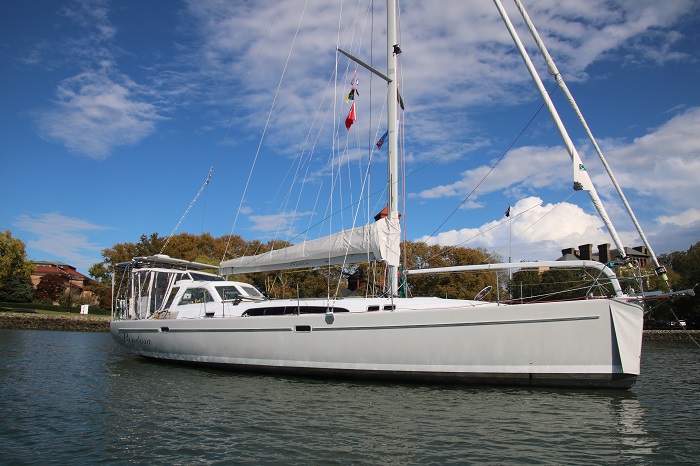 Well, perhaps it will be more than a few hours.  As they say “time heals all” well, most of the time anyway.

At least I won’t have any slime on the bottom of my keel.  And, the part of the bottom that is showing looks pretty clean.  That’s good.

Another little wrinkle is that both Cliff and George, my crew have passports that expire in less than six months, less than the minimum time prior to expiration that is required on passports when entering Antigua.    Both may have to expedite expedited renewals for their passports but there is a question if that can happen fast enough to get them here in time for us to leave on the 1st or 2nd.  Ugg…

As Gilda Radner famously quipped “its always something”.

So, here I sit, hard aground literally and figuratively…

In the next few days I’ll be posting updates including how to follow along as we make our way south.  Stay tuned.

Yesterday I’d have said that I am getting excited.  Now, it’s more like a nervous excitement.  Isn’t that always the way?

2 responses to “In Hampton and (mostly) ready to go! Getting excited!!!”