Let the migration begin! I hope…

It’s been more than a year since Pandora has been in tropical waters and I am raring to head south again.  I have to admit, however, that I am a bit overwhelmed with the prospect of how much has to happen between now and next Saturday the 5th,  a week from now when I head to Annapolis for the boat show, the beginning of my south migration.

I’ll be there for several days before putting Pandora in a slip at a friend’s house and heading home until late October when I take her to Hampton VA to prepare for the Salty Dawg Rally to Antigua.

I decided, last minute, to put a windvane steering system on Pandora and that should be here later today.  I have been thinking about this for several years now and finally decided to push the button and order it from the UK late last week.  I’m excited about this it as it will provide for a non-electrical steering option which will save a lot of battery power and also offer an independent rudder on case my primary steering or electric autopilot fails.   The unit I chose is Hydrovane and I’ll be writing more about that as I do the install early next week.

I have heard that the unit is very simple and powerful and will solve a problem of steering failure that I have had over the years and worry about constantly when I am on passage.  I’ll admit that loosing my steering keeps me up at night and memories of the quadrant linkage on the autopilot breaking while surfing down 20′ waves two years ago is still a memory that is all too fresh.

I also decided to order a new jib, something that I have been putting off for a few years.  My jib still has near perfect shape compliments of the carbon tapes that hold things together but the dacron covering is showing real signs of sun damage and I am fearful that it might fall apart on passage which would be a big problem.

I did consider doing something to stabilize the fabric so I could get a few more years out of it but everyone that I spoke to said that it just wasn’t worth the expense so new sail it is.

While we were in France Pandora was in Stamford having a bit of work done on her waterline which wasn’t done quite right when she was painted a year ago.  When I picked her up last week I noticed that it was mostly right but that the aft section of the boot top on the starboard side is still a bit off, drooping slightly,   3/4″  low from where it should be.  It’s hard to see in this photo but is more obvious in person than in the photos.  When I went over it with the guy who did the actual painting, he confirmed that one side was indeed lower than the other. 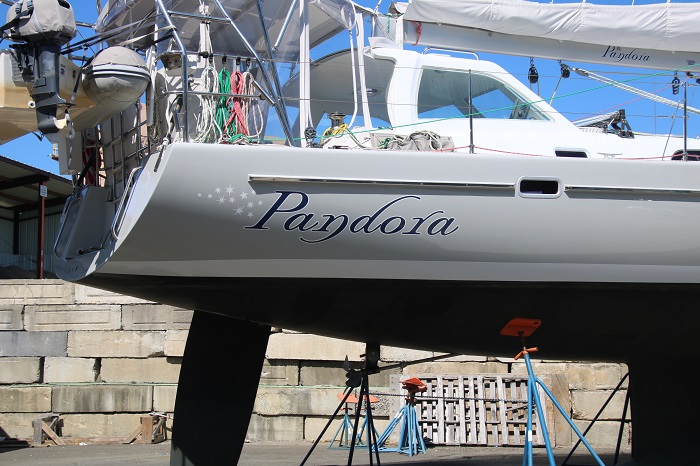 On the port side, it’s fine. 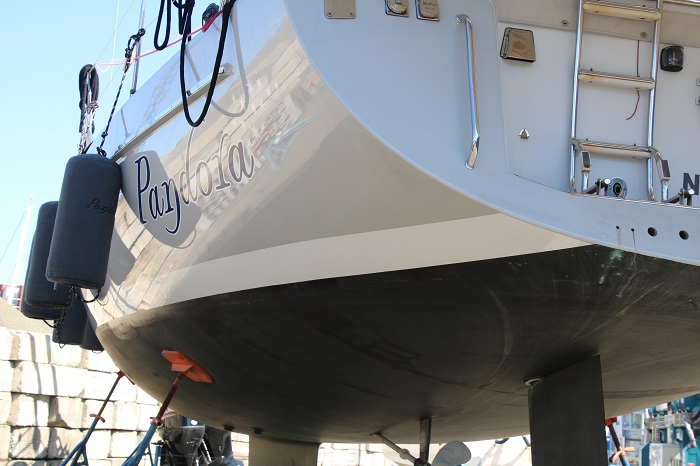 Anyway, I had the boat launched, correct or not, as I didn’t have time to leave her for another week.  I don’t know what will happen, but I still owe a small amount on the original job which can probably get it fixed elsewhere if required.

My friend Dick and I took the train to Stamford to pick her up and headed over to Northport for a few nights.  I had not been there for many years and still recall a time when Brenda and I, probably there on our 20′ Cape Cod sailboat, visited this restaurant for dinner and as we left, discovered that we didn’t have any money to pay. 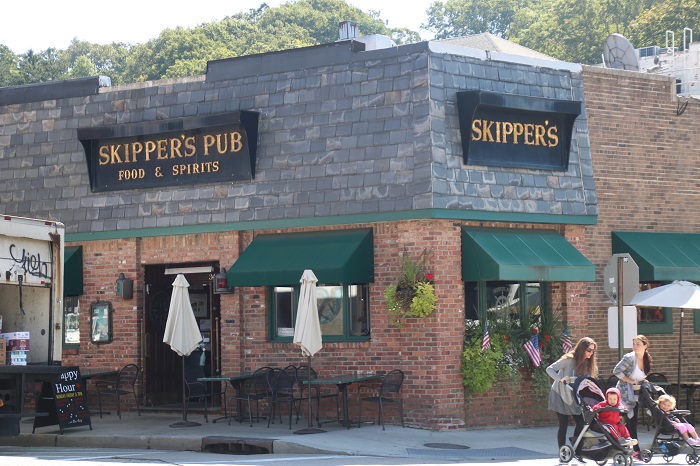 I can’t recall if we had a credit card as it was over 30 years ago and we hadn’t even had kids then.  Anyway, we were mortified and expected that we’d be in the kitchen doing dishes to work off our debt.  However, they released us and we sent a check.   Dick and I had dinner there and this time I had no problem paying my bill.

Northport is a lovely town with a huge waterfront park.  On Saturday morning the town was jammed with several thousand runners in a 10k run,  less peaceful than this photo suggests. 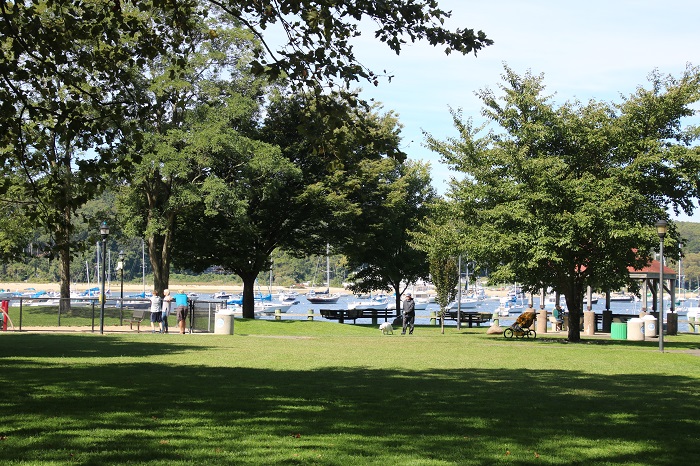 We also had a very nice visit to the Northport Yacht Club and a beautiful sunset. 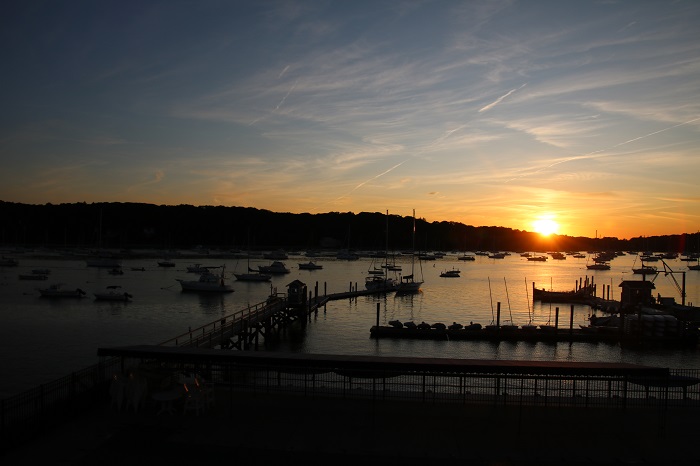 The next day we headed over to Oyster Bay, another spot that I haven’t visited for more years than I can count.  It’s a beautiful harbor lined with huge homes.

Perhaps the most famous of these huge residences, is this one, owned  by Billy Joel who purchased it in 2002 for $22,500,000 and famously got into a years long fight with the harbor commission as they would not allow him to build a dock.  As of 2007 he had decided to sell the house and put it on the market for $37,500,000 but I guess it didn’t sell as Zillow says that it isn’t on the market and was last sold when Joel purchased it. 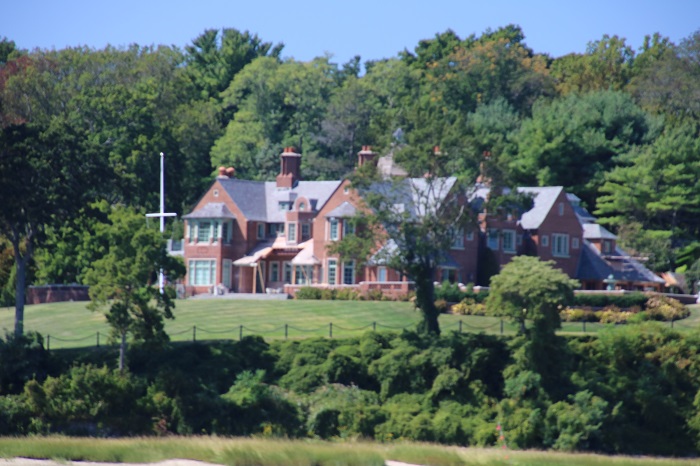 While there are a lot of docks on the harbor, there has been a moratorium on new dock construction due to the establishment of a nature conservancy that took place before Joel moved in.    In spite of his best efforts for years, he was not able to get the dock approved.

On Sunday Dick and I headed to Essex where Pandora will be for about a week before heading to Annapolis.   She looks good sitting on her mooring in the harbor. 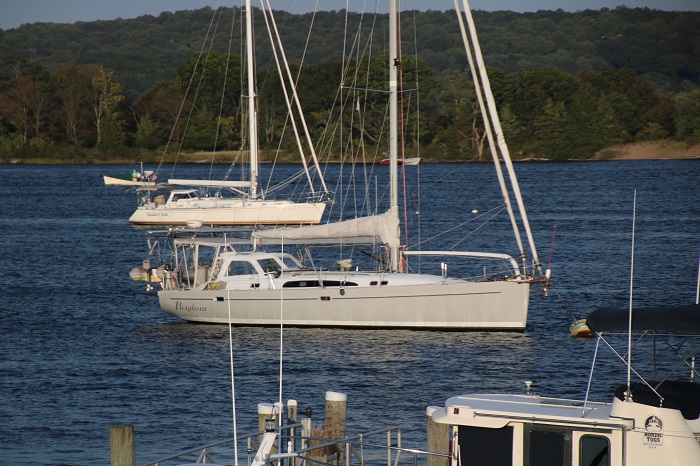 My brother Bill, who lives in PA recently purchased a runabout and brought it to Essex earlier this week.  We spent a few hours running around on the river which was great fun.  In particular, we headed to Selden creek, a favorite spot of mine, as we have been visiting the spot since the 80s.  The only boat we haven’t visited on is the current Pandora as she’s a bit too long to fit in the narrow creek.

The spot is lovely and Bill and I had a nice time sitting and watching the world go by. 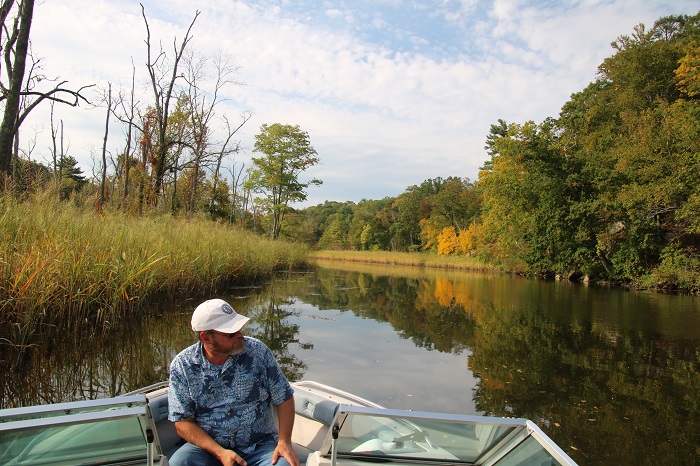 I can’t believe that summer is nearly over and it’s time to begin the migration south to warmer climes.

I’ll admit that the whole process of getting Pandora ready to make the run is a bit overwhelming but I guess everything will get done.  However, last fall I was also pretty confident and we ended up here for the winter.   Hmm…

2 responses to “Let the migration begin! I hope…”