Diesel in the bilge? Isn’t it always something?

There are a few things that particularly stress me out when I am underway and one is when fuel and that is exactly what happened on my way home from the NYYC cruise last week.

I had been noticing some time now, that occasionally noticed a small amount of diesel was somehow accumulating in the bilge.

In the “olden days”, it was said that “all roads lead to Rome” and in a boat, well, just about everything ultimately ends up in the bilge and that’s exactly what happened aboard Pandora last week.

The last two days of my participation in the New York Yacht Club cruise and run home meant motor-sailing into snotty conditions and Pandora did a good deal of pounding.   That was particularly the case when I headed into the wind on my way home on Sunday with waves that were pretty choppy with west wind opposing a flooding current.

That day I noticed, as I had the prior day, that there was an increasing amount of diesel in the bilge combined with a really strong fuel odor.

I sopped up the residue in the bottom of the bilge with some absorbent pads and spent time tearing up hatch lockers and areas where I could access the bilge, trying to locate the source of the leak.  After several hours I still could not find the source except that it was probably coming from somewhere aft.

By the time I got Pandora to a mooring at the Essex Yacht Club, where she would be staying for a week or two, there was what appeared to be a few cups of diesel in the bilge.   I again mopped up the fuel with some “diapers”, buttoned up the boat and went home.

The next morning I returned and was alarmed that there was quite a bit of fuel, more than a few inches that had accumulated.  What a mess.

The only thing that I could think of was that one of the three 50 gallon fuel tanks, most likely the one under the cabin sole, had somehow sprung a leak.  I decided that the only option was to take all the remaining fuel out of the tank, almost 30 gallons, and put it into temporary Jerry cans.

I also pumped out all the fuel from the bilge and was alarmed that there turned out to be more than I expected, nearly seven gallons, all having leaked into the bilge overnight.  I am so glad that it didn’t pump overboard via the bilge pump which it didn’t do because I had packed a number of absorbent pads in the bilge, which held down the float switch on the pump.

Pulling up the floor boards was simpler than I had expected, exposing the entire tank.  It looked huge to me.  I could not find any obvious source that would lead to the loss of all that fuel.  I wondered if it was a loose hose or perhaps that there was an abrasion in a fuel line that was hidden somewhere out of sight.  A loose hose clamp?  What about the inspection port with all those screws?  None of the above. 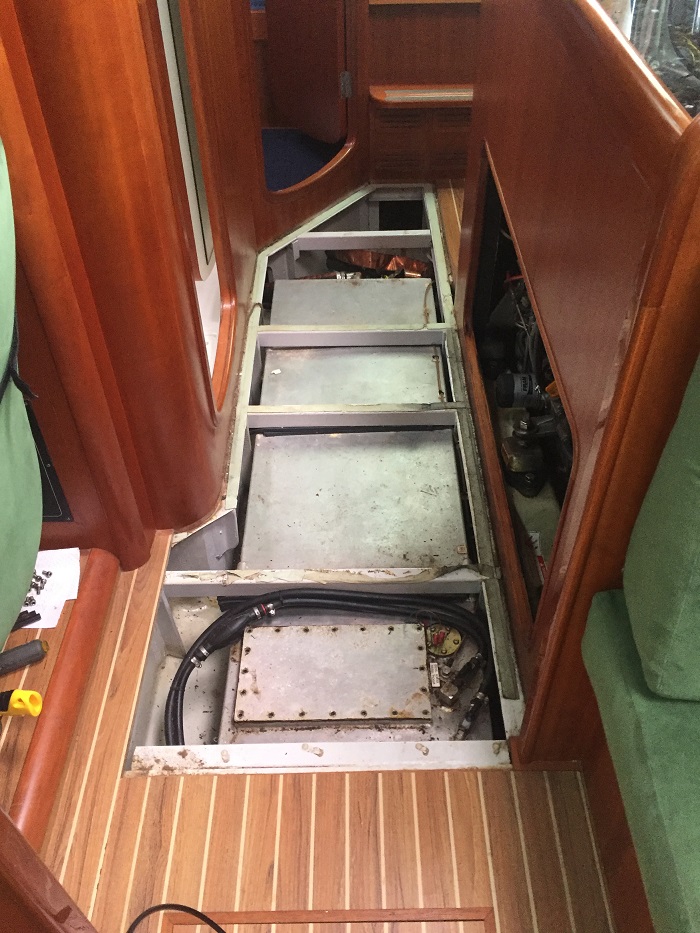 So, out came the tank.  Removing it took several hours but it wasn’t all that difficult and all the hoses came off fairly easily, lubricated by fuel, I guess.

Here’s what I found under the tank.  Yuck!  Clearly there had been a leak for some time. 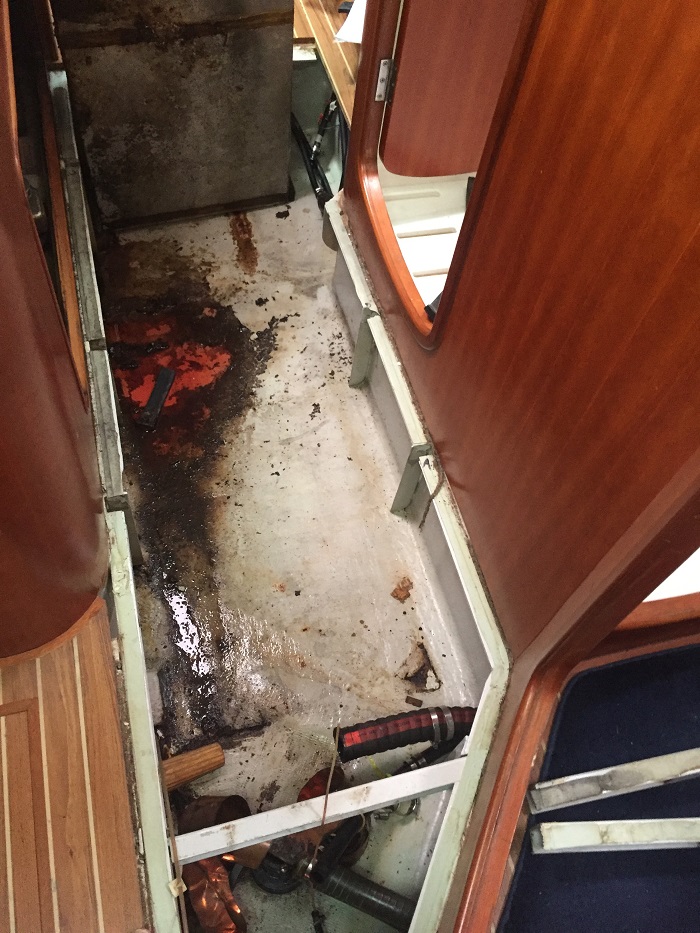 There was a nasty corroded spot on the bottom of the tank, located directly over the mess of fuel and crud on the hull.  It seems that someone had left a stainless screw under the tank when the boat was built and after 12 years electrolysis did it’s work and “ate” a hole in the aluminum tank.   Stainless screws, being a “noble metal” always wins over aluminum which is less noble and easily corroded.  Something as simple as a dropped screw in 2007, when Pandora was built, was all that it took. 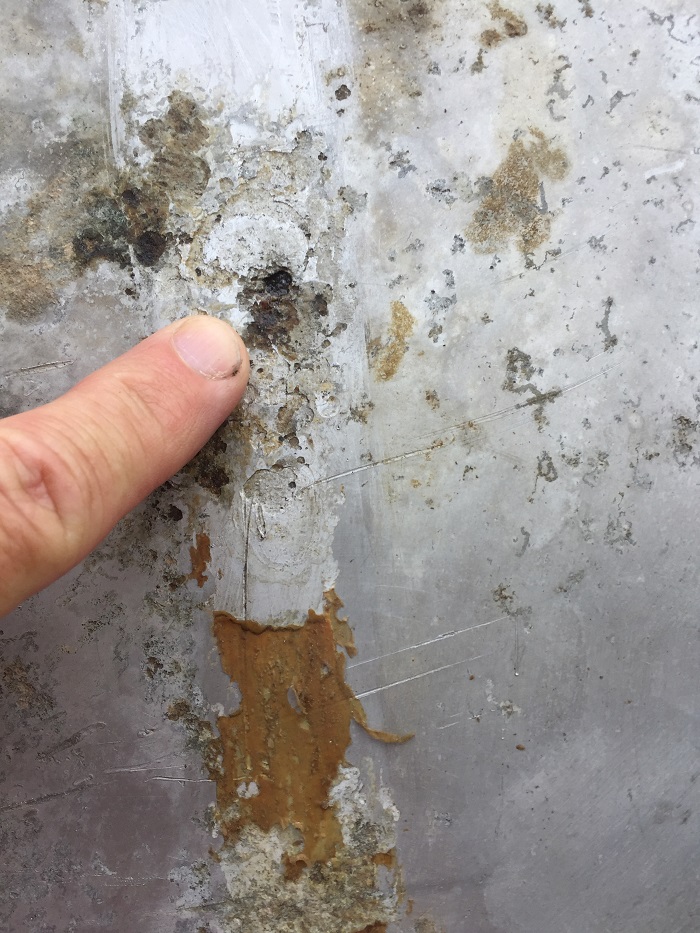 That combined with the fact that the tank was resting directly on the hull itself caused the problem.   The proper installation of the tank would be to have it resting on neoprene strips or something else to isolate it from direct contact with the fiberglass hull.  This way it would have been isolated from any abrasion, salt or errant fastenings that might be left under the tank.

I called around and only found one company that would consider welding a repair to the hole in the tank and that would have required me doing exhaustive cleaning to remove every trace of fuel and vapors from the tank.   Welding and fuel vapors are a dangerous combination, as you might imagine.

Finally, I settled on a body shop that does a lot of work with special adhesives, in this case, an epoxy made by 3M that is used to glue aluminum auto components together, something that is becoming more common in car assembly.   This material/glue is made specifically for aluminum and is also fuel resistant.   I neglected to take a shot of the finished repair but it involved grinding the surface, removing all oxidation, fitting an aluminum patch and liberally attaching it with epoxy.   Let’s hope it holds.

After the new patch was secured, the fixer guy, and he was a really big Russian fixer guy had at it.  I’ll call him Ivan as he looks exactly like you might imagine an Ivan to look, fixed the leak and after the epoxy to set, pressure tested the tank to be sure that there weren’t any pinhole leaks that might get bigger over time.  Unfortunately, in the process of pressurizing the tank,  he put in so much pressure that the tank bulged in a way that made me wonder if it would even fit back in the bilge.  At least we can be sure that it doesn’t leak.

“No problem” replied Ivan, who clearly subscribed to the “if it doesn’t work, get a bigger hammer” approach to life.  He proceeded to get a 2×6 plank, lay it on the tank and pound on it alarmingly and repetitively with a huge cinder block.  The sound was deafening and the violence startling.  It was pretty clear that Ivan wasn’t someone you’d want to mess with and I’ll admit that I found myself wondering, seeing how easily he seemed to feel slamming the block on the tank,  if that block has ever come into play if someone tried to leave his shop without paying.

Massive crashing sounds aside, the tank was only bulging a little bit after Ivan was finished.  However, I decided that I needed to find a “kinder and gentler” way to reshape things and did so with some big clamps and boards at home.  After a while, the tank looked pretty flat so I was happy.

In order to be sure that there aren’t future corrosion problems with the tank laying directly on the hull, I ordered some neoprene strips from McMaster Carr, the industrial supply company, and installed four strips on the bottom of the tank as well as anywhere that the tank was going to touch something. 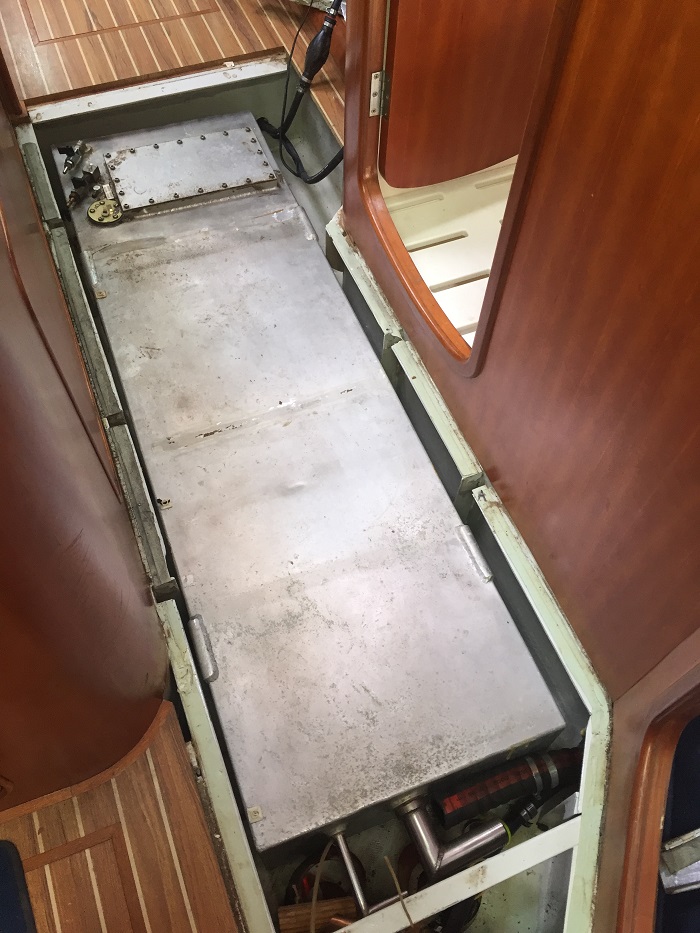 After putting all the hoses back in place, I reinstalled the floor braces, fiberglass “I” beams across the tank.  These are pressed down on additional neoprene gaskets to ensure that the tank was not going to move around in rough conditions.

I reattached all the hoses and, well, all done. 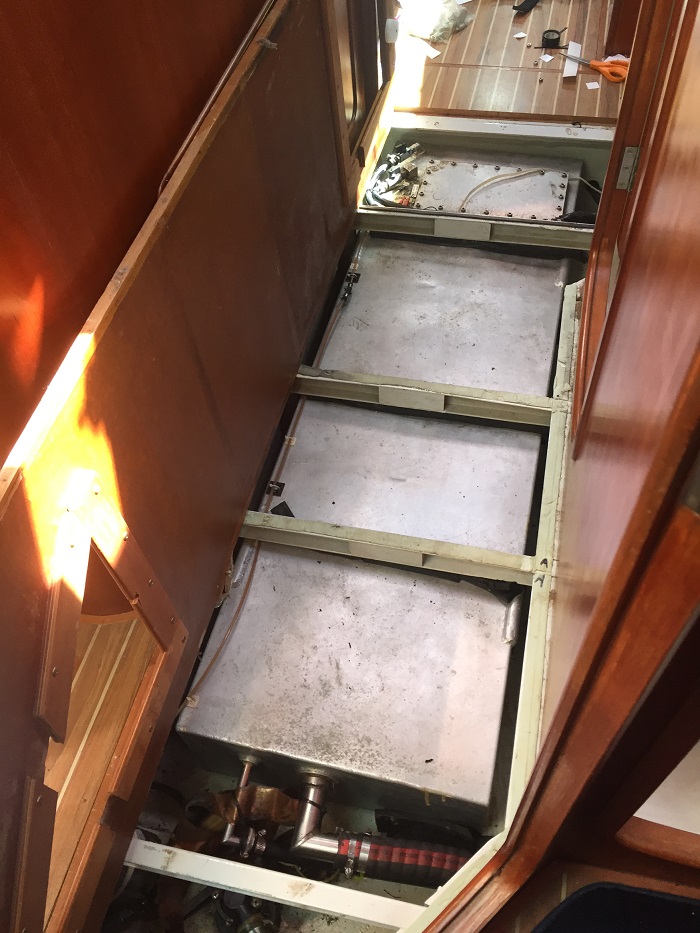 After putting the cabin sole back in place, I siphoned all the fuel back into the tank, less the 7 gallons, mixed with nasty bilge water, that I took from the bilge and voila, good as new.   Actually, I am hoping better than new.

I’ll admit that I am now wondering if a similar fate awaits the two other tanks, located under the port and starboard settees but I really hate the idea of pulling them out right now.  We will see if I live to regret that decision.  I expect that I will be thinking of possible leaks when I am 500 miles offshore on my way to Antigua in a few months.

So there you have it, disaster avoided.  Thank goodness that I wasn’t in the middle of nowhere and loosing a full tank of fuel.  That would not have been a good thing.

Next, the watermaker.  With parts coming in the next few days, I can tackle this and hopefully get it running again.

Diesel in the bilge, watermaker on the fritz.  Yes, when it comes to boats, it is indeed, always something.

3 responses to “Diesel in the bilge? Isn’t it always something?”