The orbit of the moon around the earth is elliptical and when it’s closest to the earth and is full, as it was last evening, we call it a super moon.  And when that happens to be the biggest one of the year, well, then it’s a pink moon.

Actually, it’s called pink because when the biggest super moon happens in the spring some guy decided that it should be named after pink phlox that blooms in the spring.   Ok, I guess.

Luckily, that super pink moon rose in excellent fashion last evening over Falmouth Harbor, Antigua, where we are settling into our long quarantine aboard Pandora, now entering the second week. 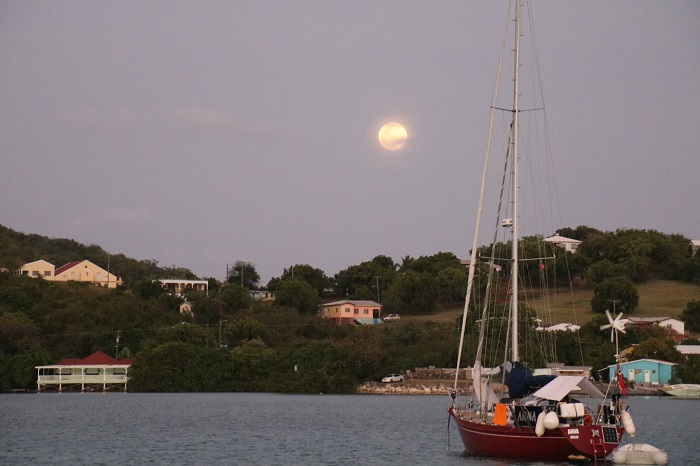 They say that a super moon is closer, and about 15% larger than a normal full moon.  It did seem pretty big and bright to us, peaking through the light haze. 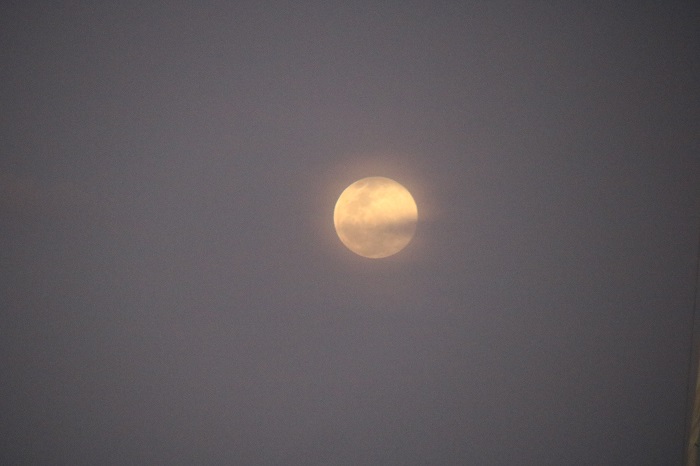 It’s amazing how bright the night is when the moon is full in an area that is really, really dark when it’s a new moon.    Unlike most areas in the US, with so much ambient light from cities and towns, here in Antigua, dark is dark.  Except, of course, when there is a huge pink super moon, which there was.

Our oldest granddaughter Tori was born under a supper moon three years ago.  Her grandmother, Brenda, YaYa, dubbbed her “tiny Tori super moon” at birth and it stuck.  Well, it stuck with us and for ever more, super moons will remind us of the no-longer-quite-so-tiny-Tori.

Somehow staying up late when we are aboard Pandora isn’t very easy, “cruisers midnight”, 9:00 is when we call it quits most night.  It seems like it’s a lot later than it is.  Of course, early to bed and all that, means that I wake up pretty early, a bit before sunrise.  Most sunrises here look about the same but they are all beautiful.  This photo doesn’t show it well, but it was quite pink, perhaps in honor of the “pink” moon. 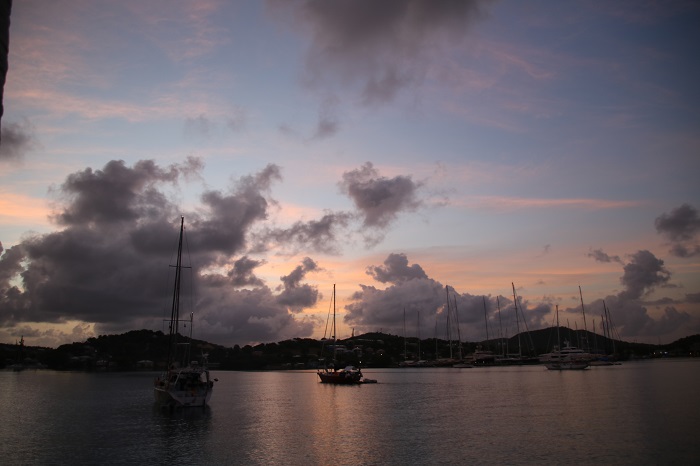 This morning I was able to watch that super pink moon finish it’s trek over the sky and set behind the mountains to the west. 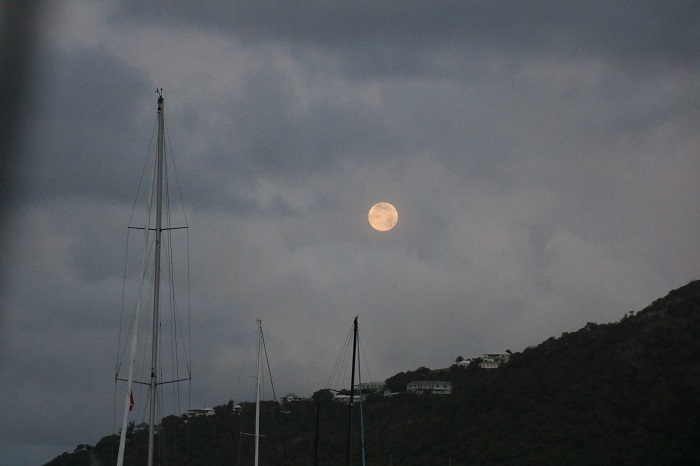 I also spied a pair of dolphins that swam by Pandora at a stately pace. 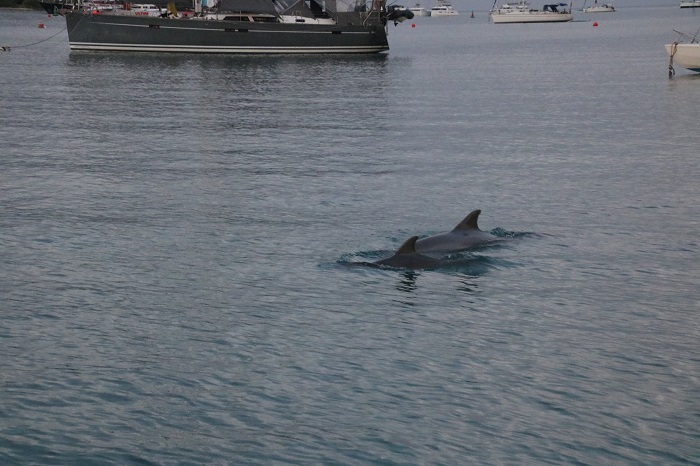 Getting good photos of dolphins is always tricky.   I got several. 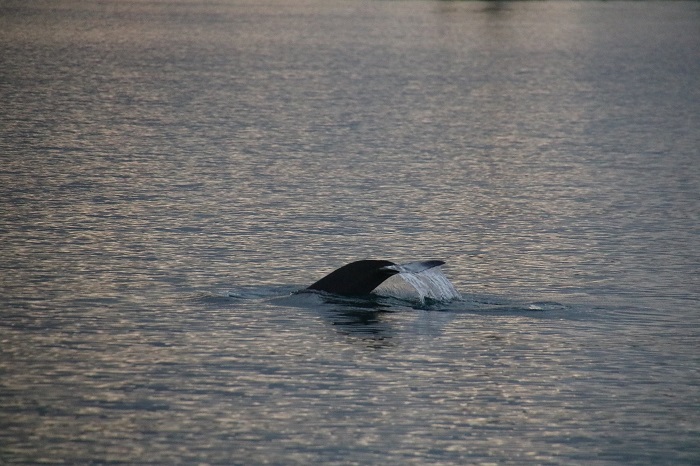 Some say that some can get a bit crazy when the moon is full.  Perhaps that’s why this fisherman, who came out in his skiff at dawn, was singing as loud as he could for several hours.   Not sure if that helped him catch fish but he sure got the attention of everyone in the harbor. 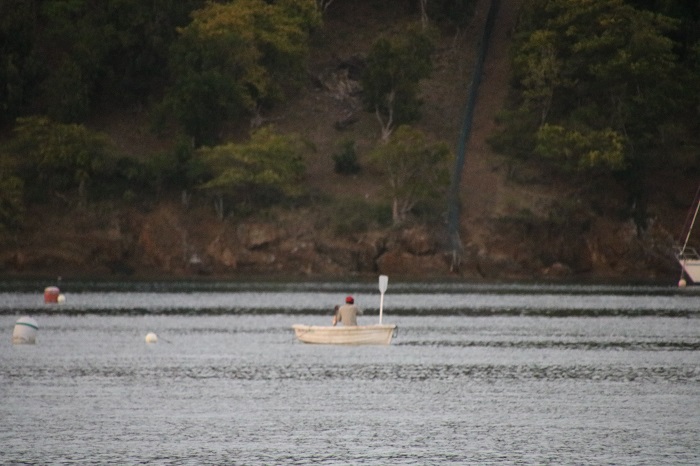 And speaking of crazy, the news from around the world is just that with Covid-19 continuing to rage just about everywhere.

I wonder if the full pink super moon made the folks in Washington crazy?  Nope, no changes detected…

And speaking of home, the US has the dubious distinction of having the worse virus outbreak of any country, world wide.  And it’s  way worse than China and  that seemed terrible as it was reaching it’s peak.

While Brenda and I wish we were home, we certainly feel like being here is safer given all the bad news coming from the NY area.  With CT and NJ new raging hots-pots, we can only watch, wait and hope that it will be safe to return before hurricane season kicks in here in the Caribbean.

While Brenda and I are signed up to participate in the Salty Dawg Flotilla to the US and hope to head to the USVIs in a few weeks, I am holding out the hope that she will be able to fly home and Steve, my mostly willing crew, will be able to fly down and help me run Pandora north to CT.

If Steve can make it, and that’s a really big IF, it will cut off weeks from my return trip as we’d take the more direct 1,300 mile run straight north as opposed to the run west to Fl and then up the coast, a total of over 2,000 miles.  It’s way longer but a lot easier down-wind run for at least half the way.

For now, I’ll take a super pink moon as a good omen that things will begin getting better soon.

Next, I’ll be reading the clouds.  Anything to find good news…