Pandora has been in Deltaville for a few weeks now and I am told is in cue to have work on her begin soon.  Having said that, I really don’t know when they will begin the jobs as they are very busy with other work.

Between the upgrade to lithium, the wind generator and the new fuel tank, there is certainly plenty to keep them busy for a while, once they get started.  All of this is going to cost a lot and with that in mind, I wanted to do some of the prep work  to get the boat ready for the new battery bank.

There was a lot of disassembly needed to pull up the floor in the main salon, where the house battery bank is secured.   To provide context, here’s a shot of what the main salon looks like with everything in place.  This photo was taken underway in “passage mode”.  Trashed, yes…but it’s the only “before” shot I had. 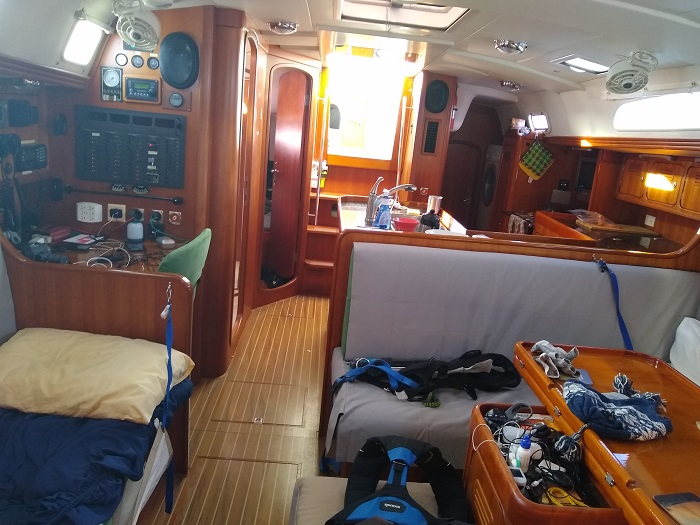 While I’m on the subject, on passage, we store all of our gear up in the forward cabin, complete with lee cloth to keep everything in place. 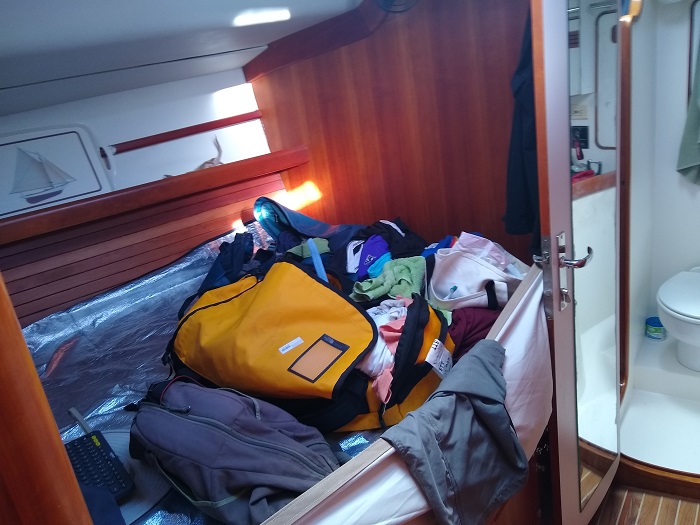 The batteries are under the main cabin sole and to get at them for replacement, is not a simple job and involved hours of disassembly, something that I didn’t want to pay two guys by the hour to do.

As you can see below, the benches are out as well as the dining table.  The floor had to come up too, obviously.   The batteries, toward the back of the photo, look tiny but they weigh nearly 200lbs each.

Interestingly, the new lithium bank will save in the neighborhood of 500lbs, compared to the current AGM battery bank and yet provide more usable power.

The two tanks forward are for water.  I am told that the two of them total 100 gallons?  I guess, but they re different sizes.  I’ll have to measure them when I get back to see if I can better understand their capacity. 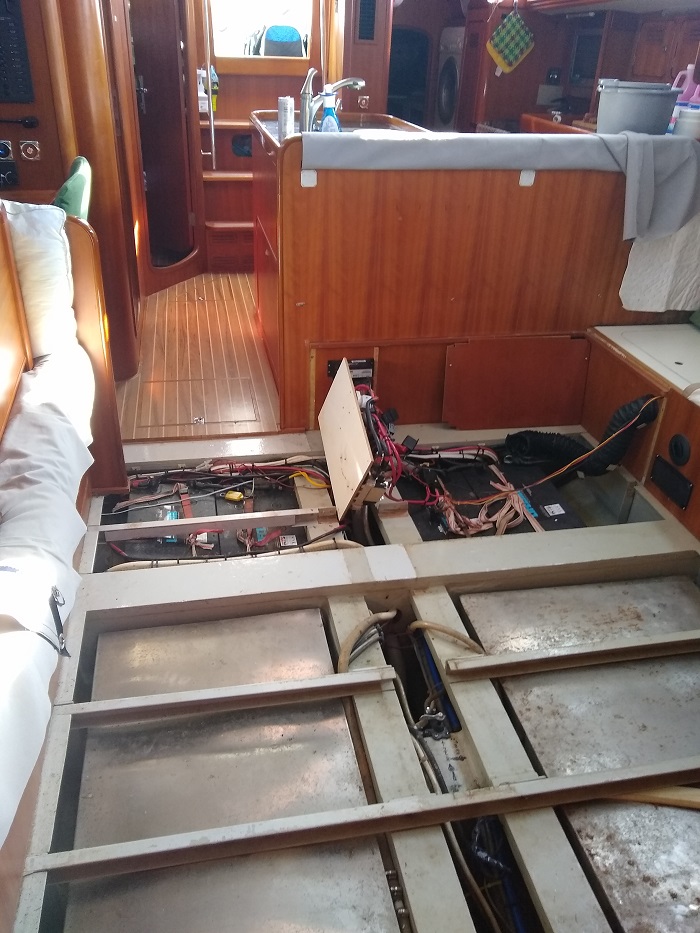 If history is any guide, the design specs for the water capacity will not match what is actually in the boat.  To that point, each of the three fuel tanks are reported to be 50 gallons each but based on how much fuel I have been able to fit into each “empty” tank, I believe that it’s more like 35 gallons of useable fuel per tank.

Because of the leaking fuel tank that is out for repair or replacement now, I installed a temporary fuel bladder in one of the vented aft cockpit lockers.  The lost capacity from the leaking tank was about 35 gallons so the 45 gallon capacity of the bladder more than makes up for the missing tank.

Setting aside the leaking tank I have I have two more 35 gallon permanent tanks and 6 five gallon plastic jugs.   So once the leaking tank is repaired/replaced, I will have a combined capacity of 180 gallons.   This will allow me to motor nearly 280 hours, more than 11 days without turning off the engine, a remarkable capacity.

This will allow me to motor at a low RPM, in fuel conservation mode, for more than ten days, enough time to motor nearly all the way to Antigua.

However, more likely, I will just run at a higher RPM to keep moving when the wind is light.   To date, the most hours on the engine for a run south has been 150, more than 100 hours short of my “new capacity”.

I installed the fuel bladder as I was quite concerned about having enough fuel for the run north this spring.  However, we ended up sailing so much of the time that I only used a small fraction of the fuel.  I still had all the fuel left in the jugs as well as the bladder and at least one of the two remaining tanks.   All and all, I only ran the engine about 50 hours, consuming about 30 gallons of the 145 that I had on board.

Here are the components of the bladder assembly as I prepared the system to take to Antigua and Pandora.  The bladder itself is over 5′ long. 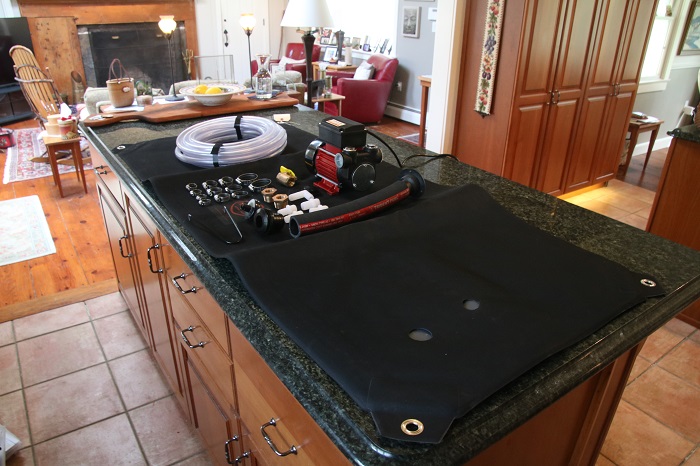 There are a lot of parts involved in setting up the system.  The tank does not come with fittings as that gives you the opportunity to put them wherever you wish so you can get good access for filling and transferring fuel at sea.  The bladders are often used by sport fishing boats or yachts making a trans-Atlantic run.  They come in a variety of sizes, most much larger than what I have installed.

I opted for the 52 gallon tank as it fit perfectly in my aft vented cockpit locker.  I sourced the bladder from Defender but the photo on their website shows it with fittings, which it does not include.  However, there are a number of options available and are easy to install.

Beyond working out how to configure the full system, it was particularly difficult to source the fuel transfer pump.  After a lot of looking,  here’s what I came up with.  There are battery powered versions too but I was concerned about the battery loosing it’s charge as it would be used so infrequently.  The roll of tubing is to run from the pump to the forward fill ports for each fuel tank. 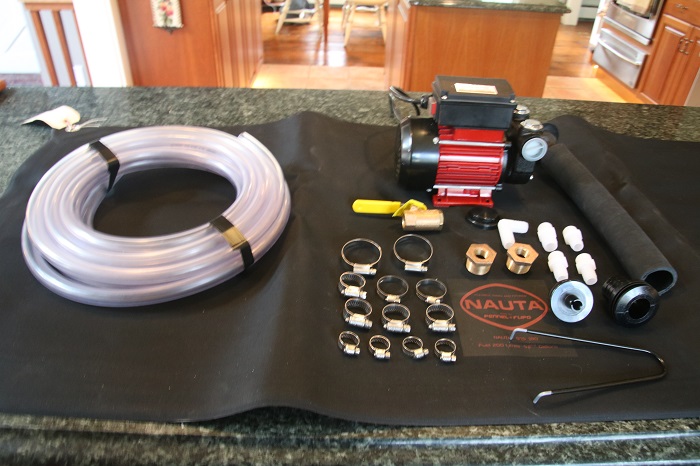 The bladder, installed, but still empty, in the aft port vented locker. 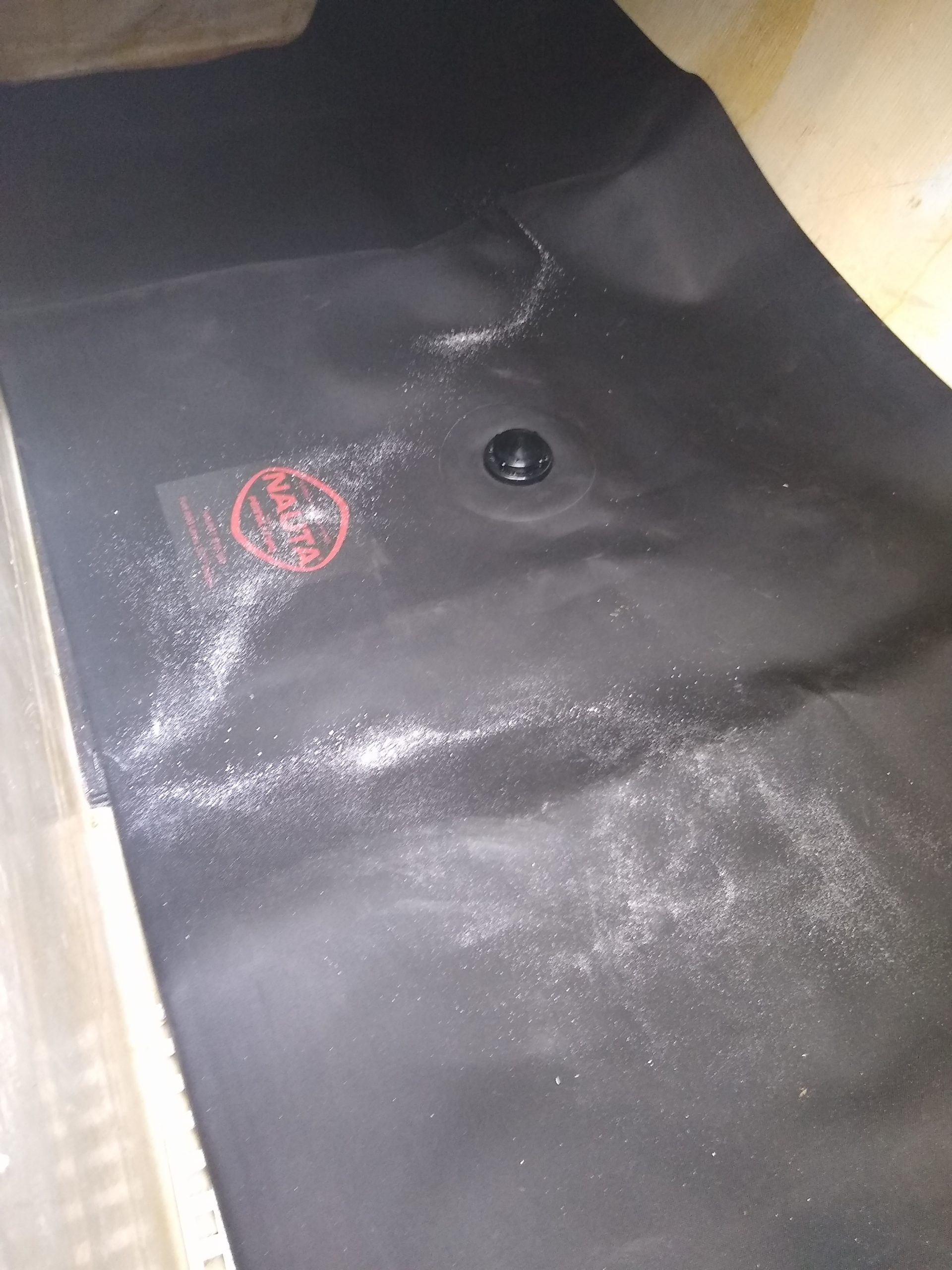 Here you can see the fill tube, installed near the end of the bladder, with the transfer tube nearby.  The clear tube will attach to the transfer pump that will be stored remotely until I use it. 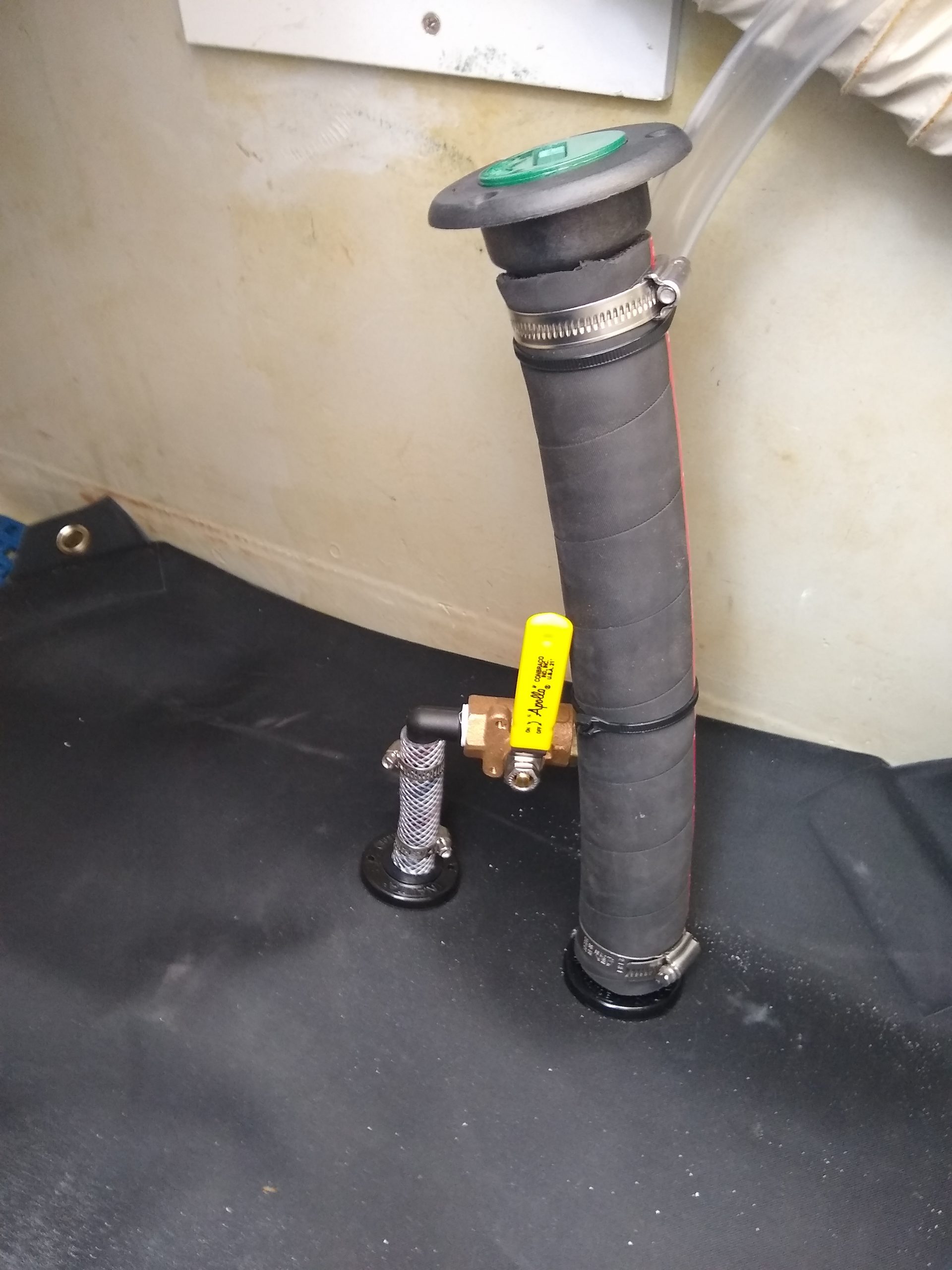 Unfortunately, I didn’t take a photo of the filled bladder in place.  I did have some difficulty in filling the bladder with fuel as when the diesel foamed, which it always does, a large “bubble” accumulated in the highest part of the middle of the bladder.  I had some difficulty “burping” out that air.  The foam made the bladder look full even though it was nowhere near capacity.  I was able to get some of that air out by pulling up on the fill hose.  However, that proved to be messy as when the air was released through the fill tube, diesel splattered all over the place.  The solution will be to put a vent tube in the highest part of the bladder that I can open up with a valve to bleed off the captured air.  There is already a screw fitting in place that I can adapt.

All and all, there’s a lot to do on Pandora and that’s only the things that I am asking the yard to do.  I have no idea when I will have Pandora back home but that’s ok if it takes weeks as I have a load of stuff to do here at home.

Having said that, Brenda has a conference in the Carolinas in mid July and that will be a good time to head to VA to bring Pandora home.  I sure hope that the work is done by then.  Given current progress, I can’t say that I am particularly optimistic.

Meanwhile, things are progressing here at home with the tile guy coming on Wednesday to begin putting down the floor tile in the kitchen.  Getting the old tile out, by me, was quite a job but the site is nearly ready to transition from a destruction to a construction zone. . 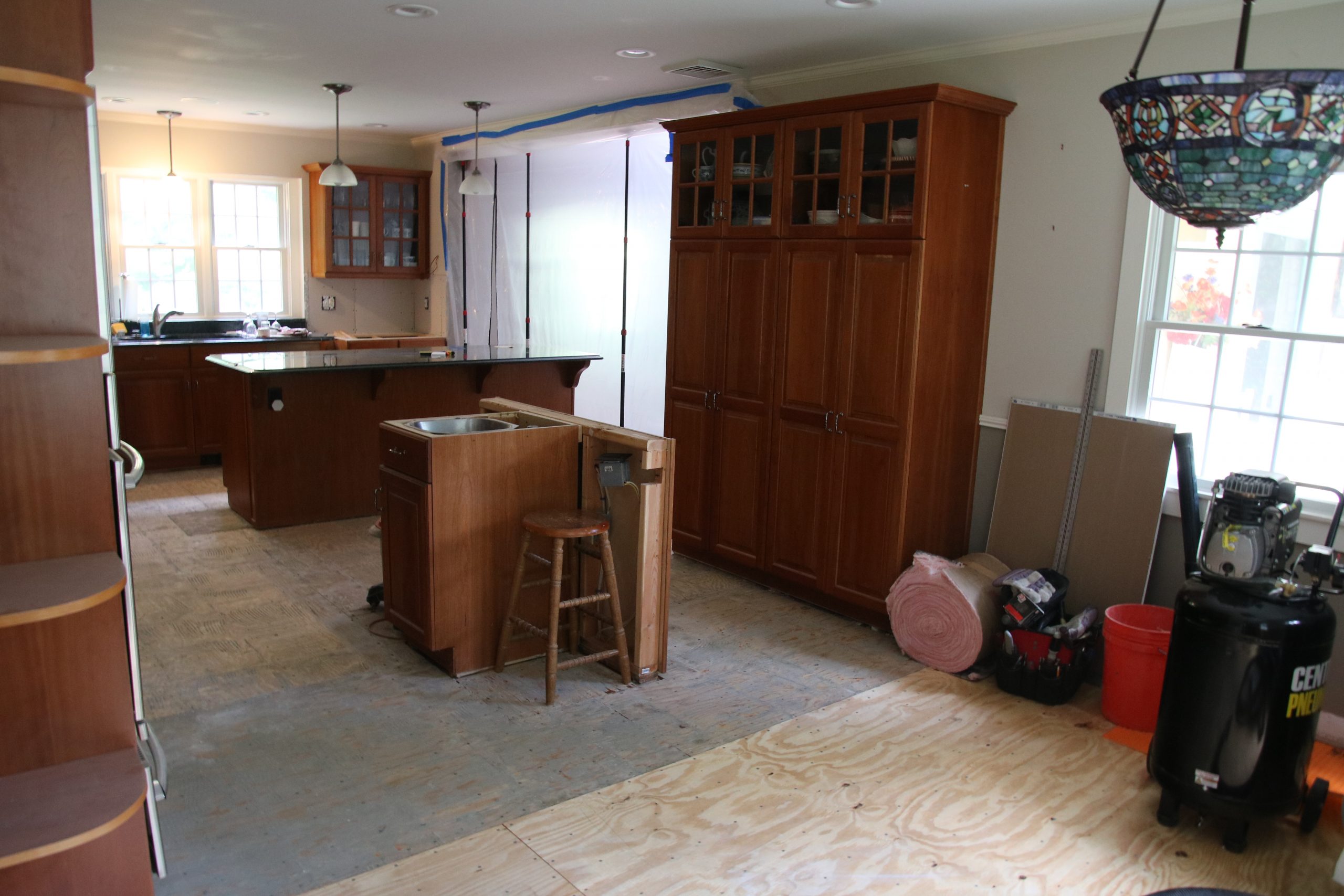 The rebuilding begins this week, first the floor, then the counters and backsplash and finally, painting the cabinets a light grey.  I have been a bit overwhelmed by the process as all the demo had to be done by me.   But, all that is nearly done now so I can turn the job over to the professionals.

In a few days I begin remodeling the third and final full bath, the one off of the guest room in Brenda’s studio.  I’ll be doing most/all of that job myself and I have to begin the demo before the dumpster is taken away later this week so I can get any rubble out of the place easily.

No rest for the weary, or handy.  Meanwhile, Pandora awaits…