Is there anything more Maine than Schooners?

Arguably, there’s nothing more “Maine” than wooden schooners and I had a generous “helping” of them a few days ago in Somes Sound on Mt Desert Island.

As is the case with so much of life’s experiences, it’s all about being in the right place at the right time.   And, as luck would have it, we were as 2016 is the 100th year of the founding of Acadia National Park and the organizer of the Corinthians Cruise found a way for our fleet to participate in a parade of schooners up Somes Sound.  And, as if that’s not enough, we were to lead the parade up one of the most beautiful pieces of water in all of Maine.

And it gets even better.  To make the sight even more of a spectacle for the thousands that watched from shore, about 35 of our member’s boats dressed ship with signal flags galore.

We waited at the mouth of Somes Sound for the schooners to approach as they emerged from the summer afternoon haze.  Well, actually, there wasn’t much of a haze but I liked the sound of that. 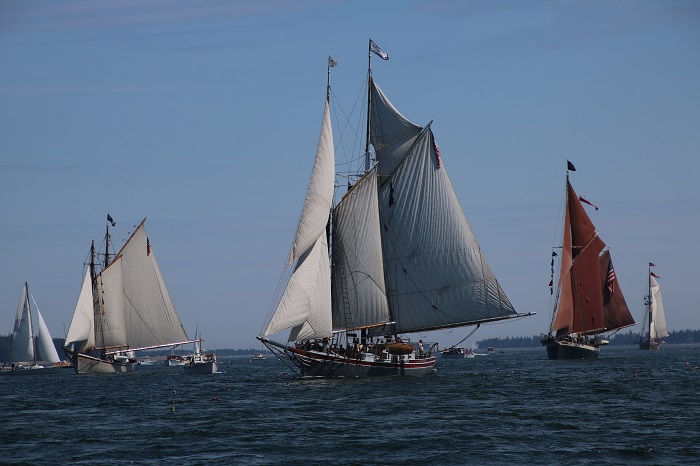 As the schooners assembled to begin their run up the sound they tacked back and forth.   This one came pretty close to Pandora’s bow. 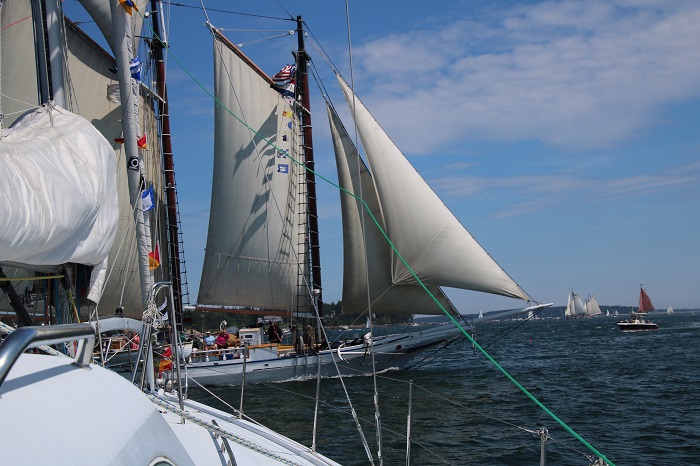 Our fleet began to head up the sound ahead of the schooners in single file. Well, sort of single file.  Then the word came from the Master of the Corinthians, “hurry up, they are going to pass us”.   And hurry we did. 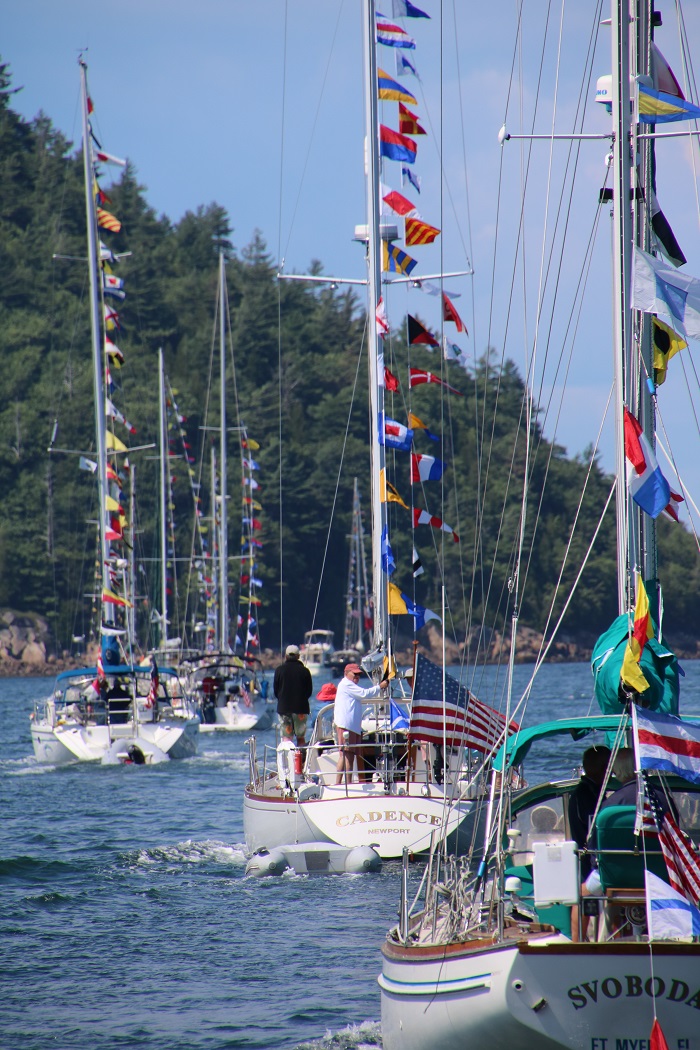 Things got a bit chaotic after a while and we ended up in more of a clump than single file.  Chaos or not, it was a joyous sight.  My friends Alice and Andy have a cute little tug called Loon.  It was fun to see her chugging along with the fleet. 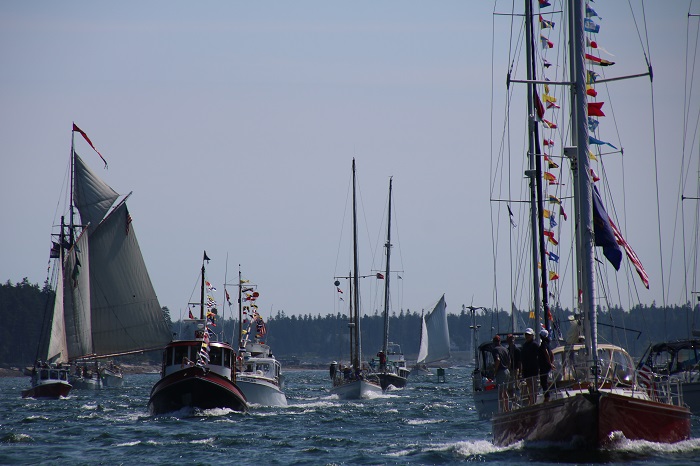 Many local boats got into the act including this lovely little red sloop making her way with the fleet. 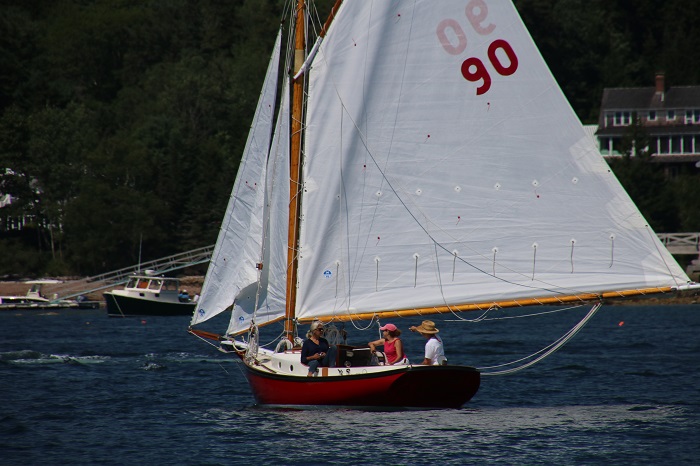 After reaching the head of the sound, The Corinthians turned to face the schooners and watched them sail by.

What a sight as the schooners passed by and saluted the spectators on shore with cannon fire. 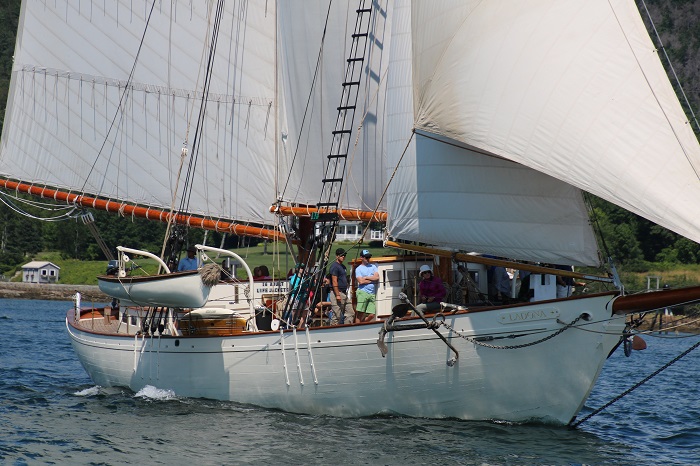 Love the fine lines of the stern.  Hard to believe that something this big can be so sleek. 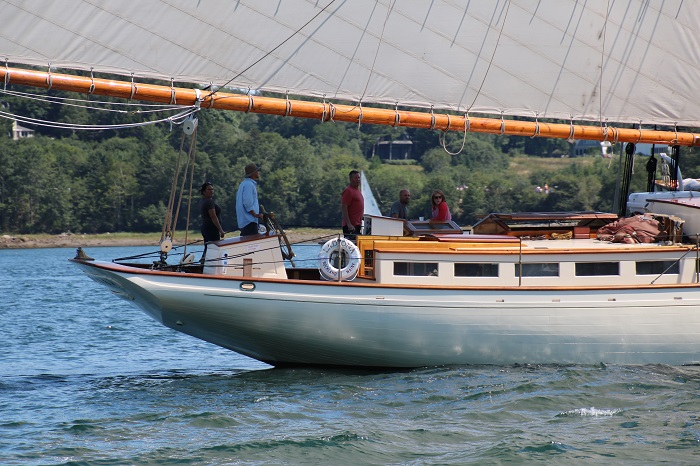 As the schooners passed, the perspective changed and the afternoon breeze freshened.

The schooners turned to short tack back down the sound into the wind.  It was impressive to see them maneuver in so tight a space. 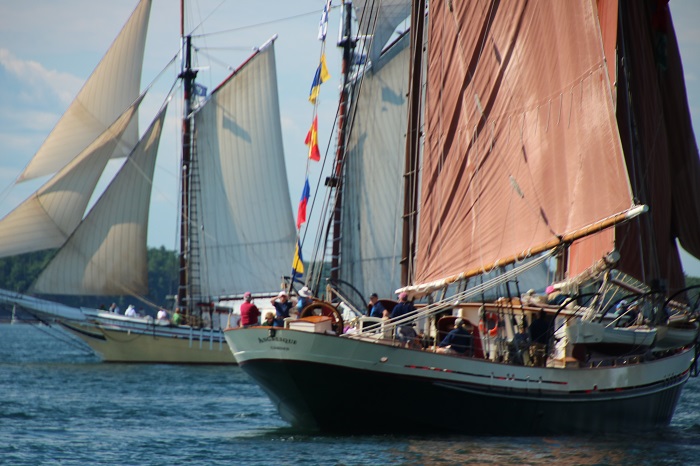 Our Master Leigh was aboard “All that Jazz”, leading the fleet.  To see the largest schooner in the fleet tack in front of his boat was quite a sight and a fitting way to finish up the parade. 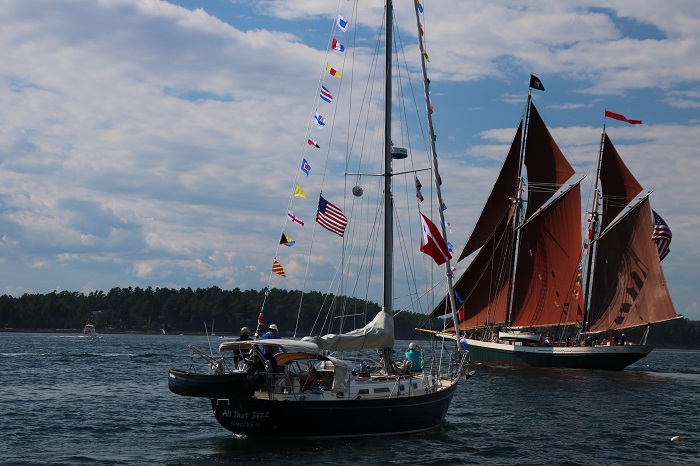 We all scrambled to the local boat yard to pick up moorings for the evening.  Like the rest of the day, and to use a phrase that my late father loved, it was “organized chaos”.  Yes Dad, and what joyous chaos it was.

This trip is my 16th to Maine and I have to say that to be in a parade with these magnificent schooner was one of the highlights of those many  years.

What a day.  I was blessed to be a part of such an iconic spectacle that makes Maine, well, Maine.

3 responses to “Is there anything more Maine than Schooners?”