And the iron gate slams shut.

Years ago a friend observed that after a frantic summer of parties, boating, barbecues and the like, that the minute Labor Day weekend draws to a close you can almost hear the iron doors of summer slam shut and everyone goes home.

In a way, my arrival at the marina in Deep River has that sort of finality as Pandora will be hauled for the “season”.  However, for us, the season is different as “summer” is when Pandora, and me, take a rest from the admittedly frenetic moving about that we do for the rest of the year.   Actually, “frenetic” is the word that Brenda uses to describe our time afloat as we “hurl” ourselves from one place to another.  Romantic life?  Well, sometimes.

I’ll admit that I am ready to take a break as the long passages north and south with crew do get tiring.  The 1,300 mile run from Tortola to Hampton and then another 360 mile run to Deep River totaled some 11 days at sea, plenty of time away from Brenda all the while trying to keep Pandora in shape, and salt free down below with crew who aren’t quite as focused on keeping things below as “salt free” as I am, on those long ocean passages.

Fortunately, running Pandora from Hampton took less than three days and we were able to sail, with the wind directly behind us, for nearly the entire way. According to the Delorme transponder, our fastest recorded speed, at an exact moment when the tracker captured the speed and location, once every two hours, came in at 8.3 kts.  By contrast, the highest recorded speed on the run from Tortola to Hampton came in at 10.4 kts and I expect that there were times when we went faster than that.  And, while I’m quoting “Delorme moments”, the highest recorded speed we hit in January, on our run south, came in at 12.4 kts and I recall seeing speeds, several times, of just under 20 kts as we surfed down a particularly large 20′ wave.

This is our track from Hampton to Deep River, Pandora’s “home” while she’s “on the hard” this summer.

And this, the track for our entire 2017 run, not counting the part from CT to Hampton and then on to Beaufort as I didn’t have the Delorme unit on board. Alas, no “proof” of that part so you’ll have to trust me.  All and all, a long run, never the less and I don’t even want to think about the number of repairs that I made along the way. 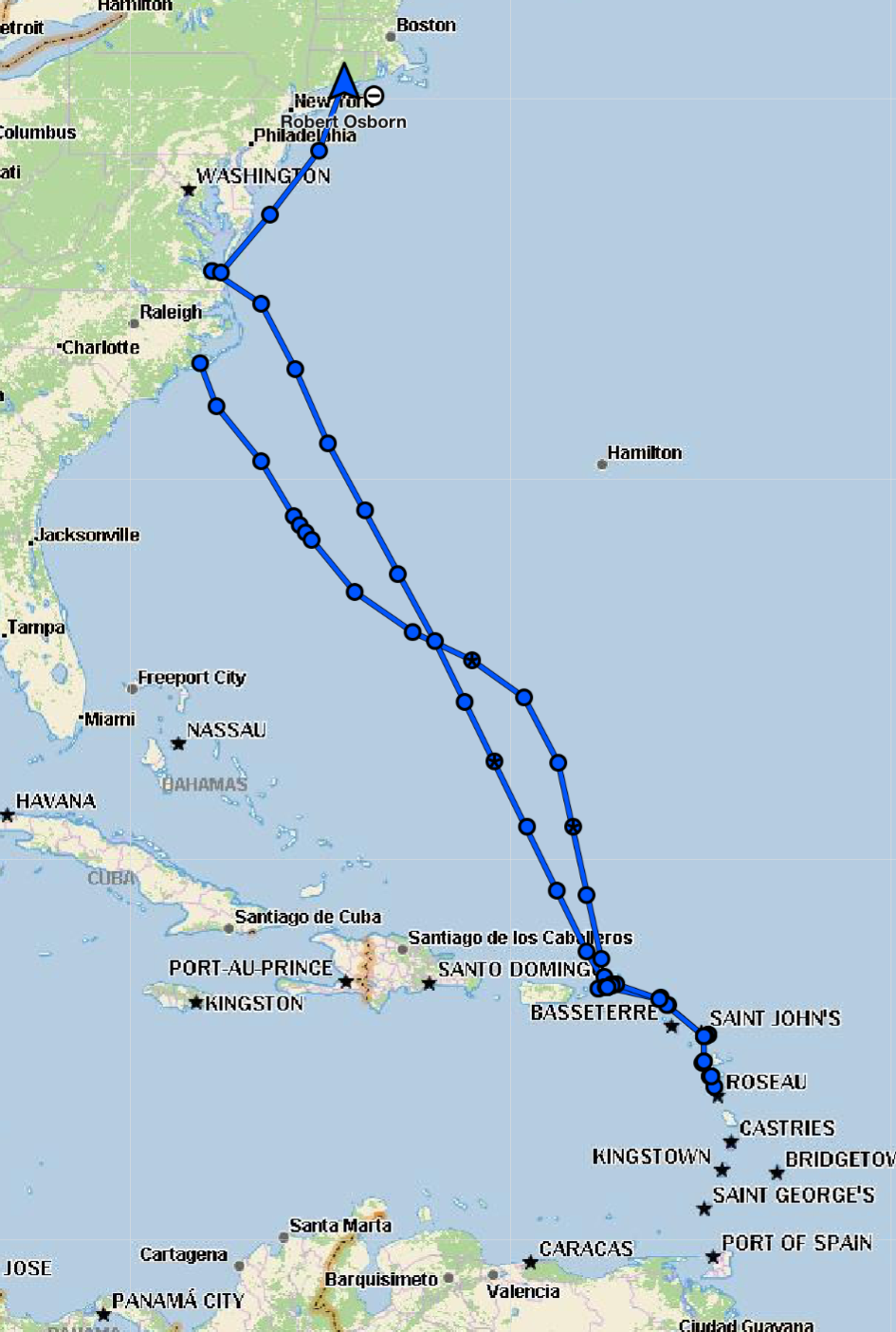 Oh yeah, remember those dolphins that visited us a few days ago during the run north?  Well, here are the “best” photos that I was able to capture of their visit and I’ll say that it is supremely frustrating to photograph dolphins in “real life”.  I find that they are, as a rule, not nearly as cooperative as Flipper was where it always seemed that he’d jump out of the water on command and give everyone the perfect shot.  Most of the time my shots showed water only but sometimes a few in frame out of the several dozen that were cavorting around Pandora. 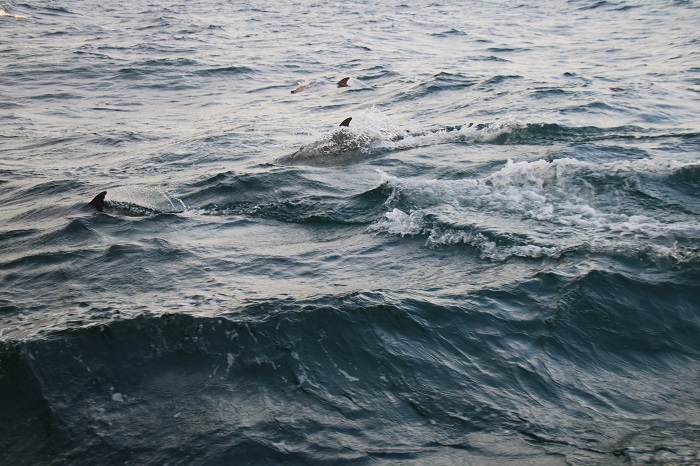 I almost got a great shot as one shot along nearby. 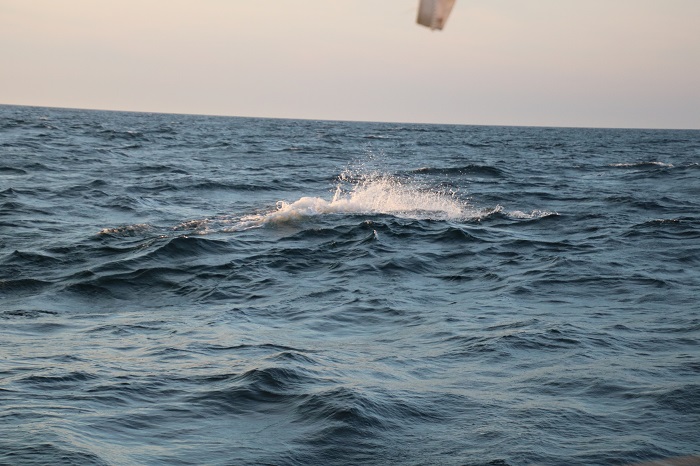 It was remarkable how fast they zipped by Pandora even though she was moving along at better than 8 kts.  In between my shots there was lots of jumping and flipping out of the water, especially from the juveniles, but most of the time I just missed the best shots only to capture a brief partial shot.  At least I got this one’s beak. 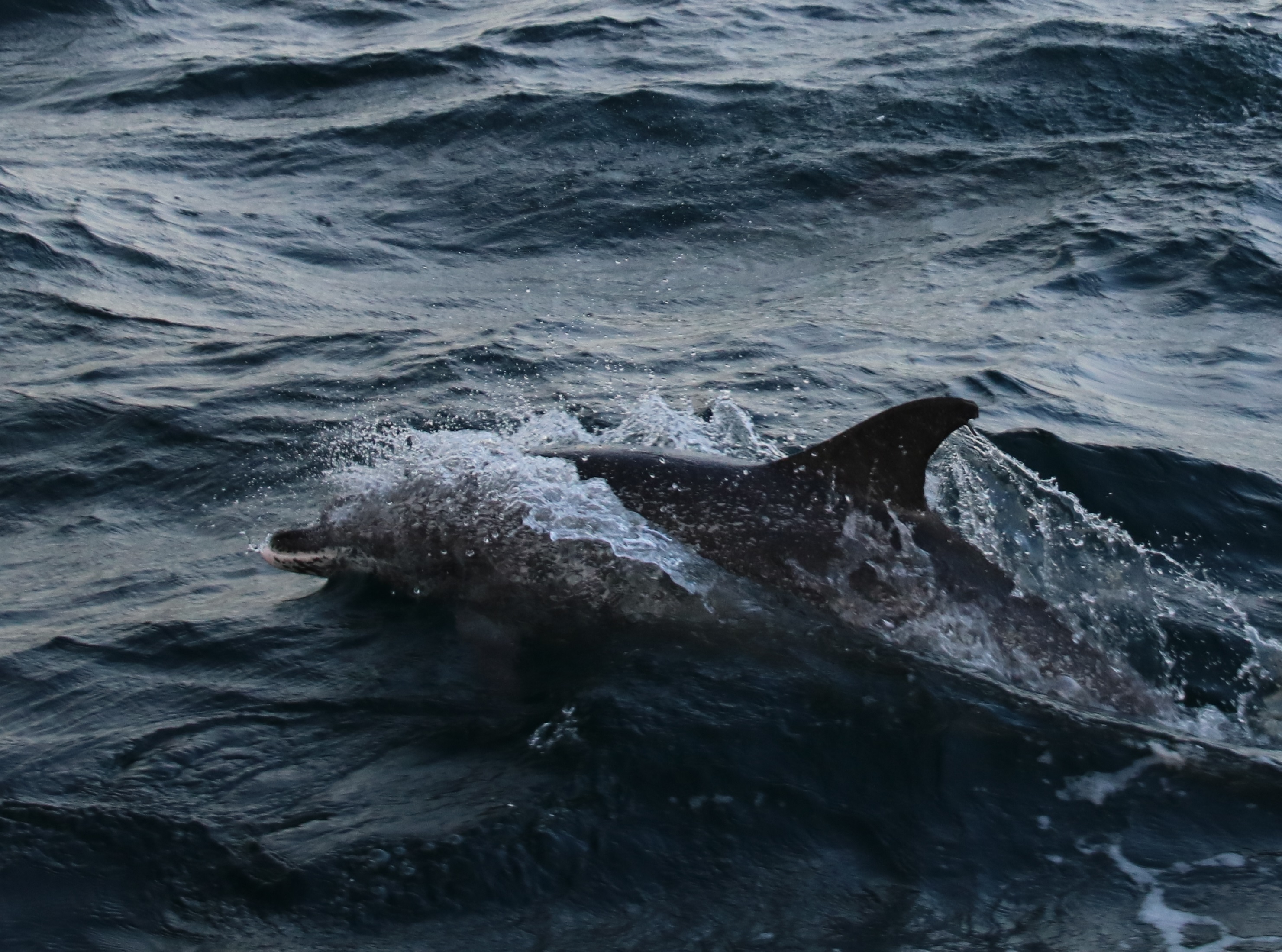 And most of this one that jumped nearby. 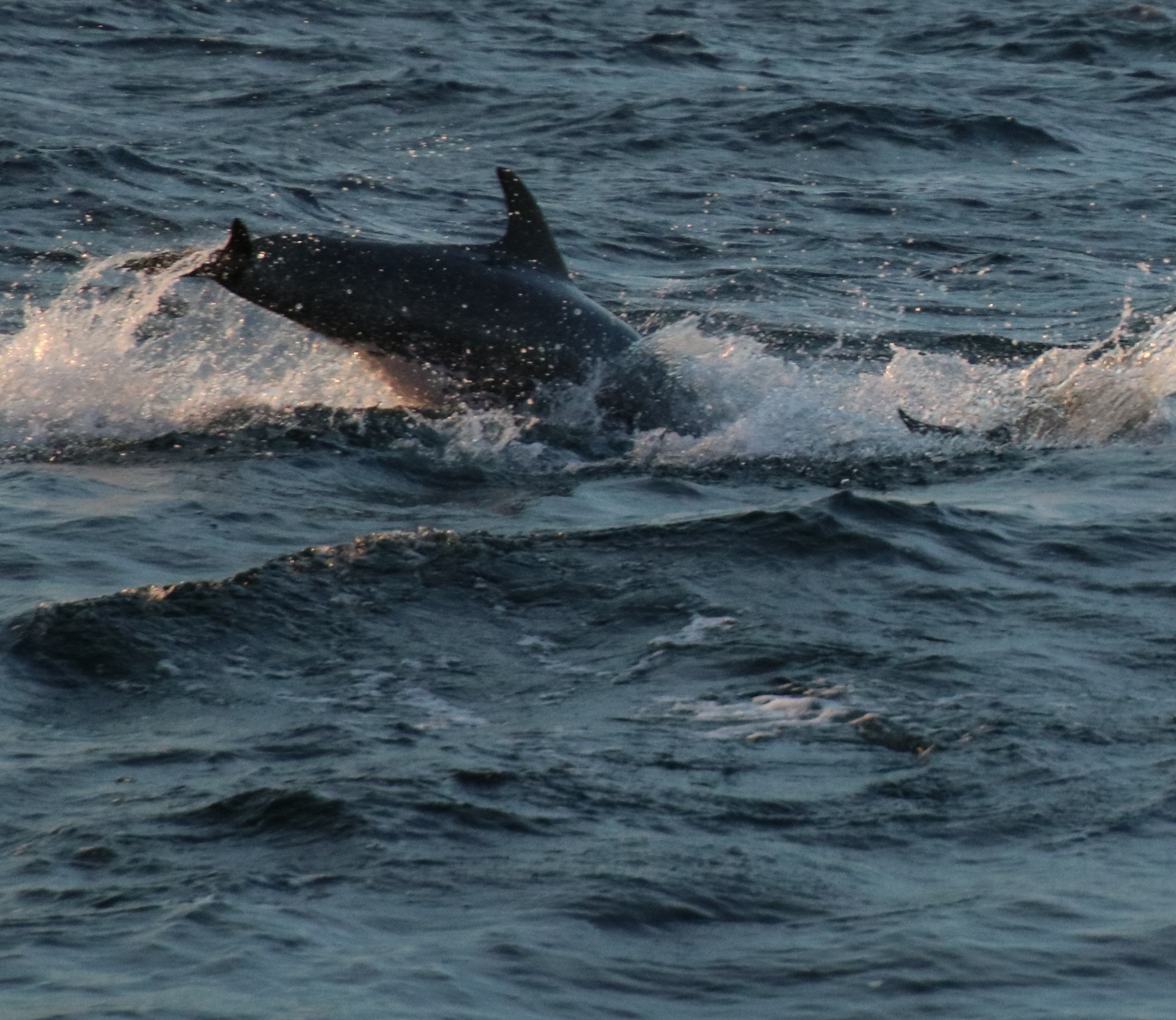 And, thanks to a camera that takes 3-4 shots per second, the tail reentering the water a fraction of a second later. 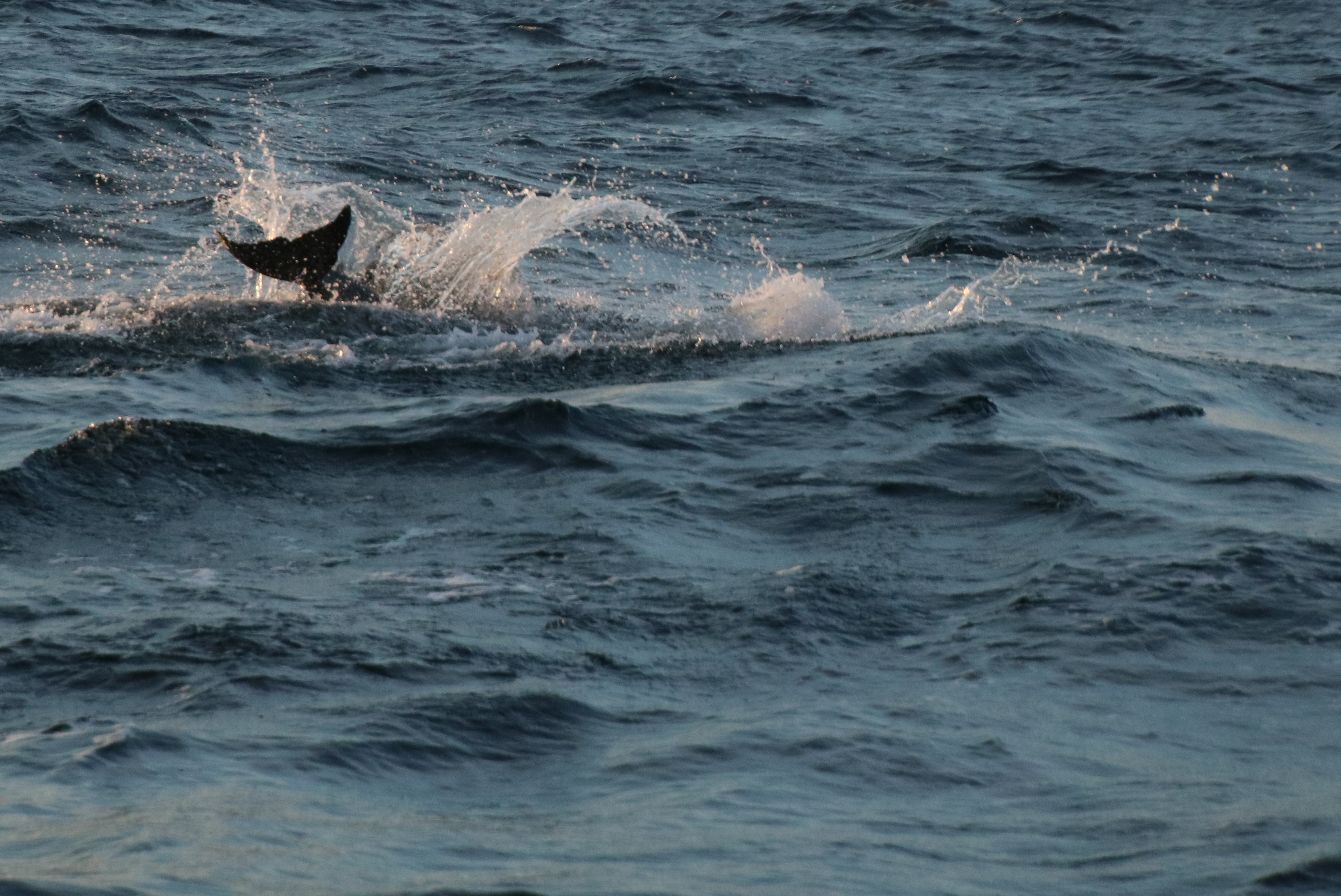 “I gotta tell you Bob, those photos aren’t really that great.  That’s the best you can do when surrounded by several dozen dolphins?”  I challenge you to do better unless you are shooting Flipper.  I’ll bet you can’t.  Besides, you had to be there to understand and you weren’t.

All and all, it was a pretty easy, and mercifully short run home with the inevitable view of Montauk light, as re rounded the point, which I hadn’t seen since last October  when I began my run south. 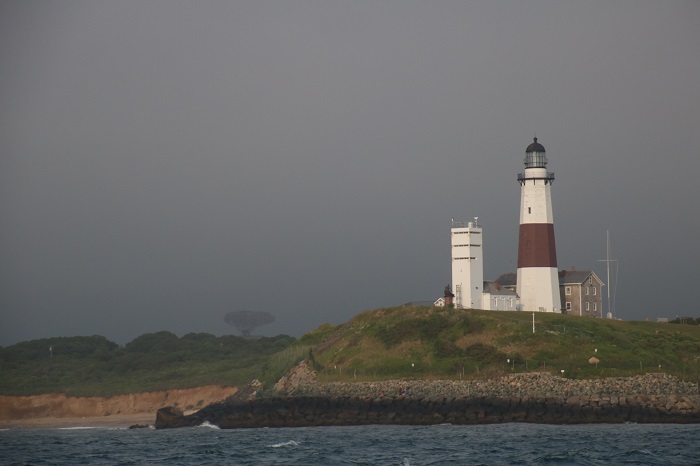 Well, me and Pandora are home now.  She’ll be hauled in a few days and I’ll be “hauled” into the realm of projects.  Ironically, all this happens at the beginning of the Memorial Day weekend that signals the BEGINNING of most sailors season, but is the end of mine.

When we tied Pandora to the dock yesterday I distinctly heard that gate slam shut signaling the end of Pandora’s 2016-17 sailing season.

When I stopped in to see the yard manager Brian, yesterday, he asked me “why are you pulling Pandora for so long?”  My answer, “we need a break and besides, I have a bathroom to remodel”.  Indeed, lots to do so I’d better get cracking.

One response to “And the iron gate slams shut.”