Wow, hard to get up today? Can you say “time change”?

Anyway, it’s time to get up and be on the move.

Yesterday was an amazing day for me and Brenda as we took in the sights here in Lisbon.  I won’t bore you with the details except to say that we took in the National Tile Museum and a local castle.  Both pretty neat.

Oh yeah, and we walked over 7 miles.  I have no idea how that translates into km as Brenda’s fitbit keeps track of such things and it’s set to miles.  It’ was plenty of walking and I could tell that we had walked a lot when I finally sat down at the end of the day.

The tile museum was a remarkable place that chronicled the history of, remarkably enough, tile.  You’d be amazed at the diversity of Portuguese tile.  I wasn’t clear about exactly what the huge building that the museum is in but somehow there is a chapel inside it that looked pretty original and that it had been there for a long time.  Some of the information on the signs was in English. Anyway, there was a chapel.  Pretty amazing. 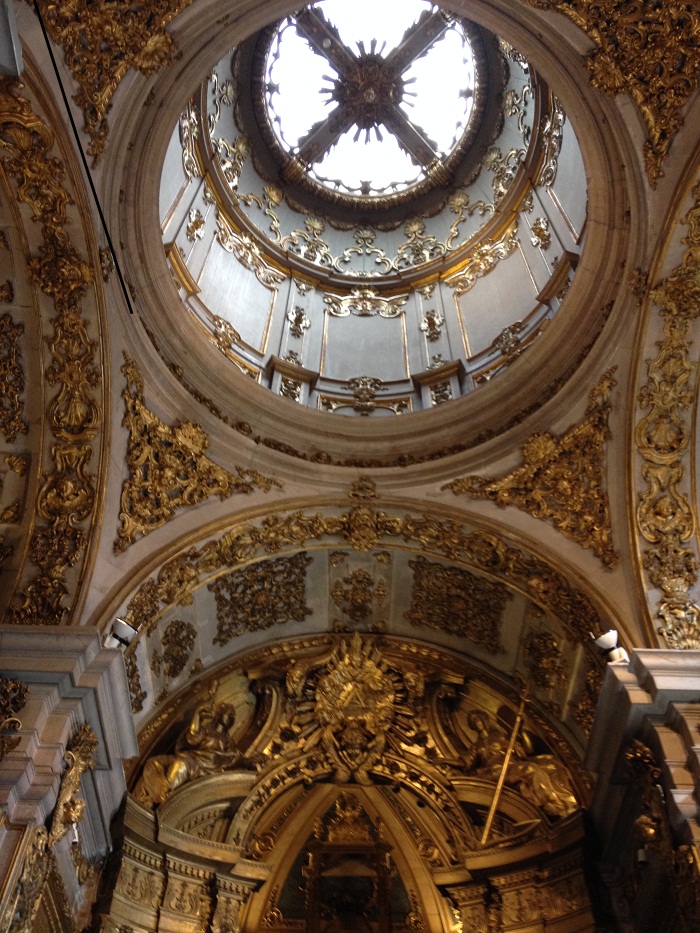 There was also a special exhibit that featured contemporary pottery which was wonderful.  The work was on the theme of the sea.  Yes, I promised a “nautical theme” now and then.  This will have to suffice as a nautical “token” for today.   The pieces were large scale.  This ceramic crab is about 4′ across. 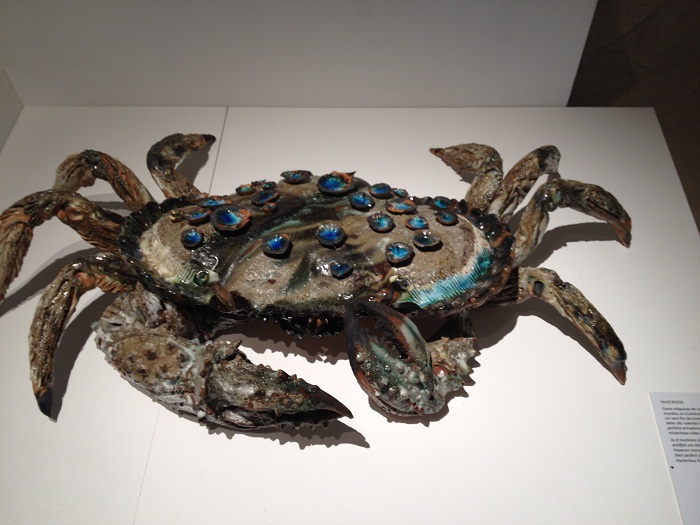 The room was packed with pieces and they were very well presented.  The centerpiece, sardines, a major commercial catch in these waters. 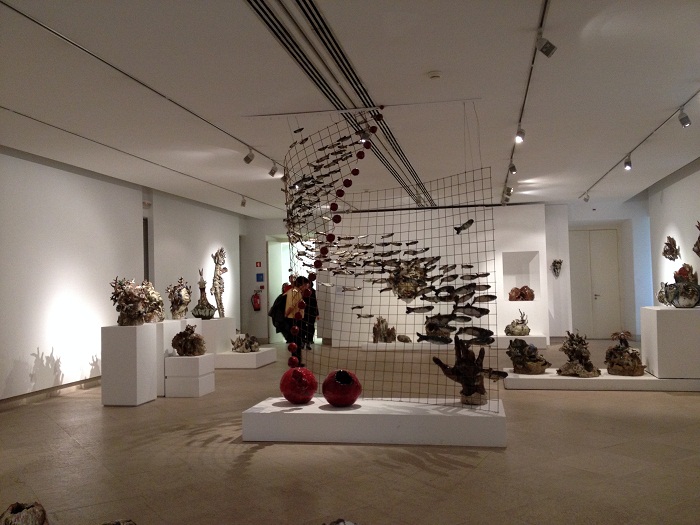 We had a nice lunch in the museum courtyard. 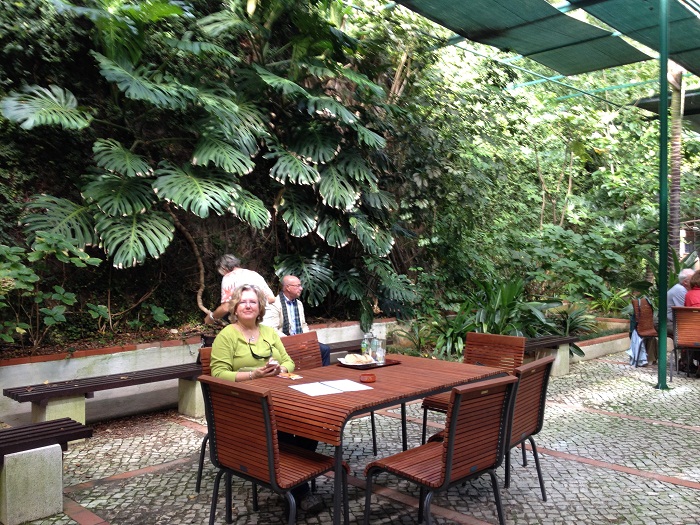 There was even a family of turtles in the courtyard fountain. 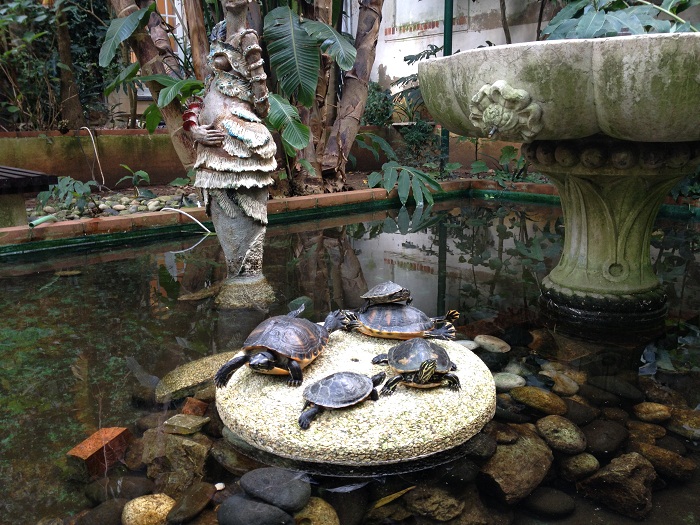 Where every you walk, it’s up and down, but mostly up.  This street was particularly charming. 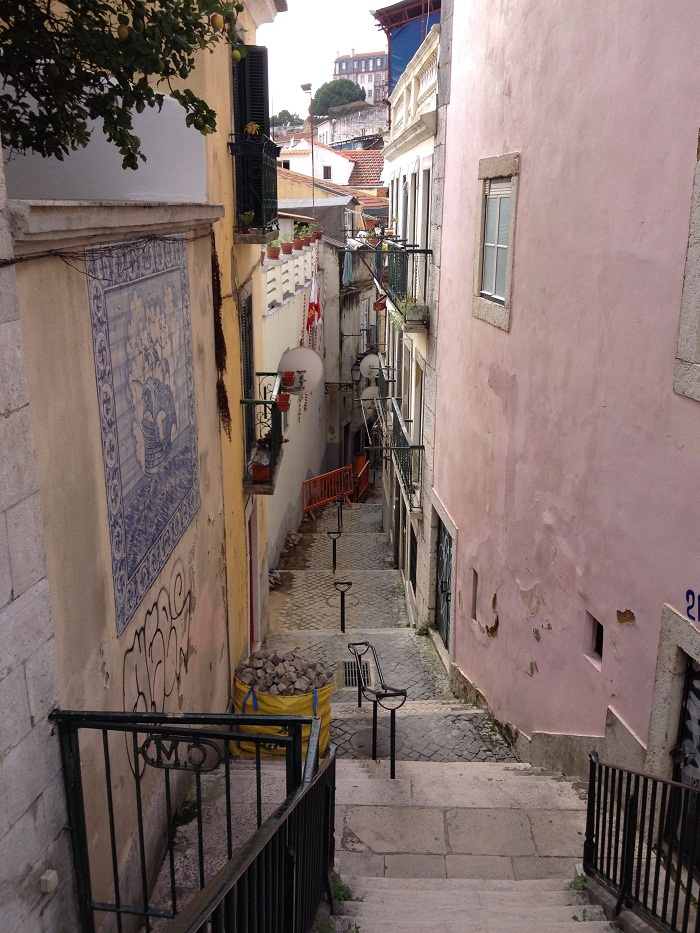 And, after dark, we walked by again.  Magical. 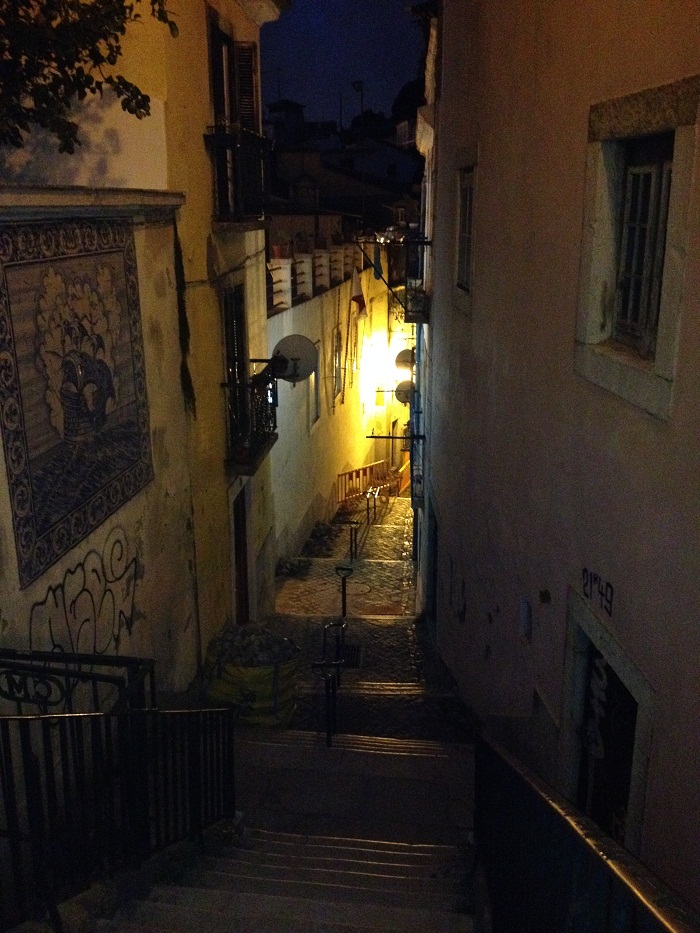 We also walked a long way, up hill in both directions, to a castle.  That makes sense, I guess as by design, castles are ALWAYS up hill.  I understand that this is because up hill makes it tough for the infidels to bother you. 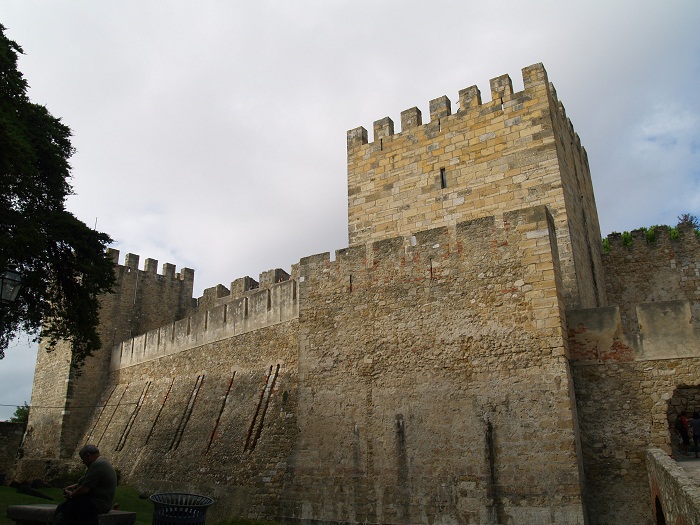 There was even a resident falconer at the castle, with a beautiful owl who flew up into the trees in the castle’s central courtyard. 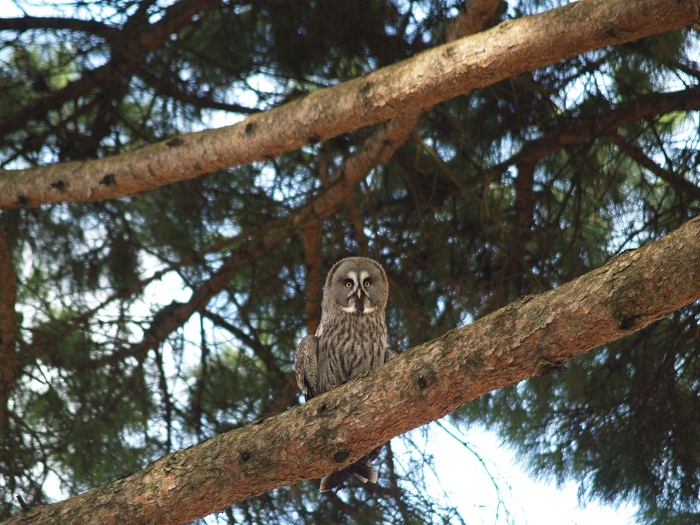 Pretty amazing view the folks that lived in the castle must have had.  I guess there were fewer buildings back then.  Good thing, as now there’s plenty of places to hide if you’re planning a siege. 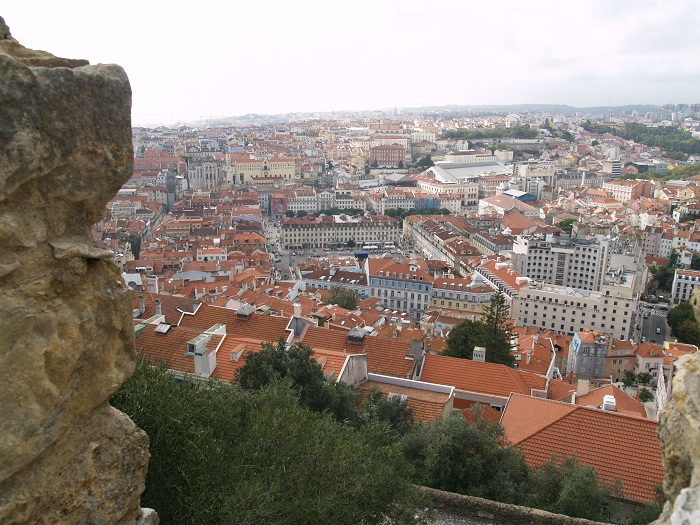 There was even a “wine cart” called “wine with a view”.  You get to keep the glasses, which are plastic and very nice.  They will be a nice addition to Pandora’s fine crystal collection. 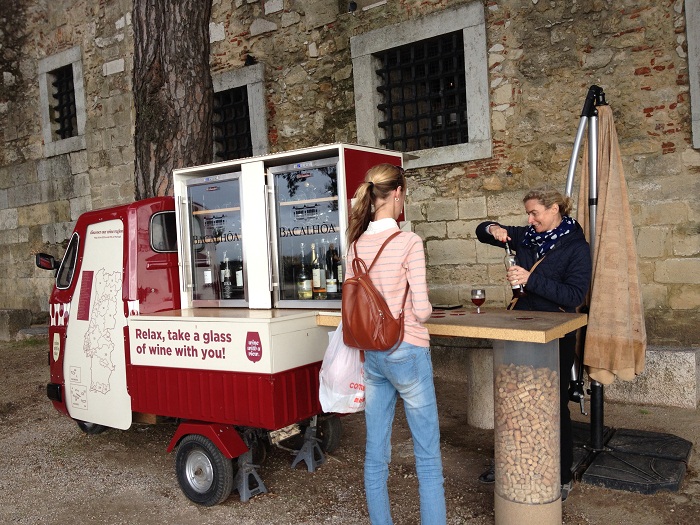 All that for four Euros each.  Not bad. The view from the seats carved in the wall… Yes, quite a view.  Does drinking wine help if you have vertigo?  Not enough research on that yet.  Perhaps I didn’t drink enough to be sure.  There’s always today… 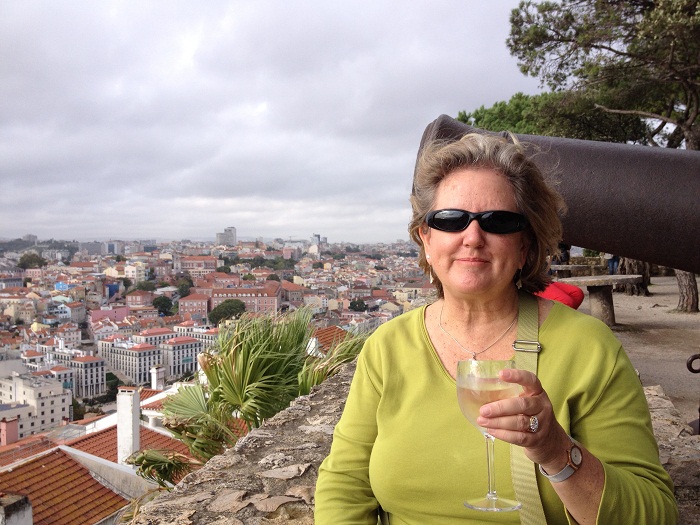 Looks nice, yes?  I won’t talk about the gale blowing up the side of the castle. Brenda sat on the side looking into the wind.  Wouldn’t want her hair to blow into her wine, would we?

And a view of a lovely cathedral.   Several actually. 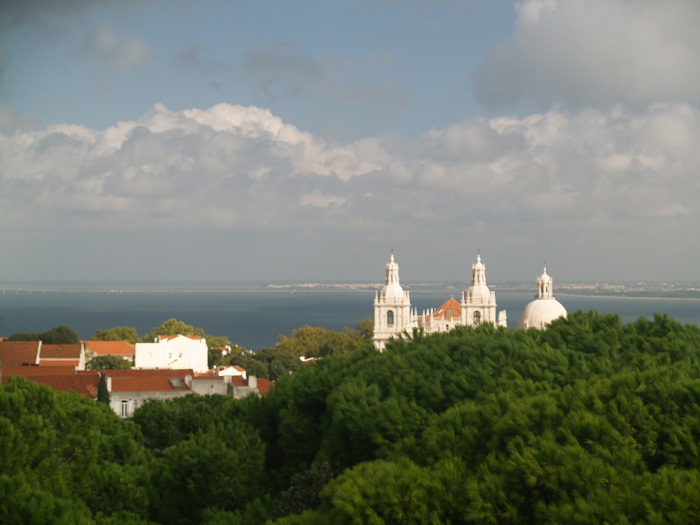 Loads of up and down.  Mostly up, both ways, it would seem.  It was a great day.

On our way back to the apartment Brenda was seduced, against here will, into a pottery store. Does she look like a woman with a “pottery problem”?  Yikes, looks like an itch that will need scratching.  At least there’s a 50lb limit on checked baggage.  Please, let that be true. 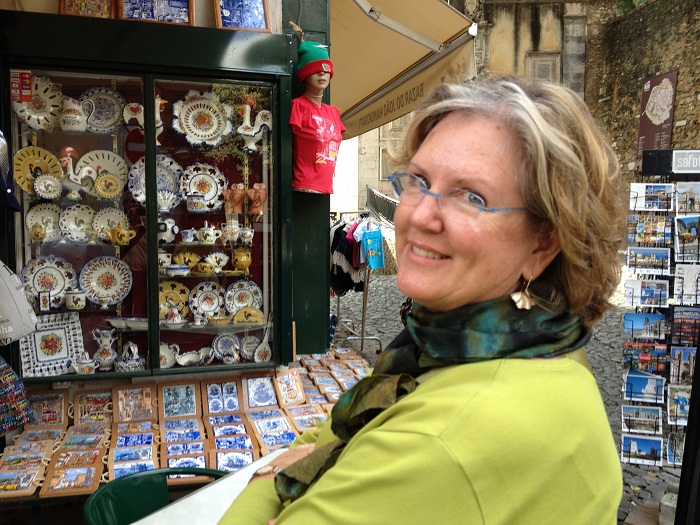 Today, have to find a bank.  It seems that VISA isn’t taken EVERYWHERE YOU WANT TO BE, here in Lisbon.  First a bank, then another museum.  Actually, first the metro.  That should be a learning experience.

Enough of the day spent on this post.  We’re off…  More to come.