Down the energy rabbit hole.

It was some 25 years ago when I first installed mechanical refrigeration aboard one of my boats.  The install was quite simple.   I drilled some holes for wires and cooling lines, maneuvered the cold plate into the cooler, hooked up the wires electrical leads and turned it on.  Done!  Not…

It turned out that it wasn’t all that easy after all.  What about an energy audit?  Did I balance the consumption against my power reserves?  How would I put the power I used back into the battery?  No, no and NO!

That simple install turned out to be just the beginning of a tortured process that would last years and cost more than a few boat dollars.  And those cold beers, well they were a long time coming.

So, here I am decades later and I finally feel like I have things fairly well figured out.  When I think back to that initial install and where we are now, I am struck by how much things have changed, the sophistication of the equipment and how much greater our energy needs are now when compared to years ago.

Back in the “olden days” the need for power was primarily focused on a few lights and perhaps mechanical refrigeration, if we even had that, with little else.  Nowadays, it is not uncommon to have a whole fleet of devices, computers, cell phones, rechargeable lights, autopilot, navigation instruments, microwave, TV, watermaker and much more, all needing greater and greater amounts of power, loading up our little “grid”.

Over the summer I upgraded the house batteries to lithium, replaced four of the 5 solar panels and added a wind generator.   Here’s what the “array” looks like.  A lot of capacity in a small space. 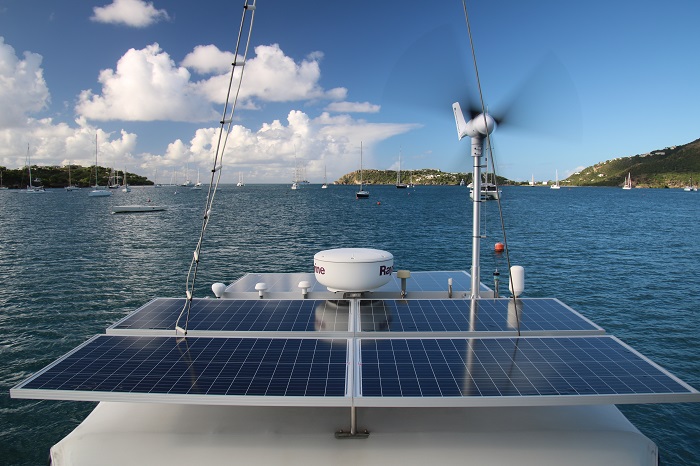 As recently as last year, on passage, I had to run the engine to charge the batteries at least once a day.  As I don’t have a house generator, unusual for a 47′ boat, running the main engine heats up the main cabin terribly as we made our way south.   Pandora is a wet boat so we have to keep everything sealed up to avoid an errant wave finding it’s way below making things a lot steamier down below.

While we don’t have a generator, beyond my little gas Honda 2000, I should mention that the main engine has a power takeoff to a large alternator that can easily put out 200 amps at 12v for extended periods.  That, along with our house inverter, are powerful enough to run our AC while motoring, which we did for nearly three days of near calms on the trip this fall as even an hour of engine runtime each day adds a lot of heat to the main cabin.

Prior to our recent upgrades, we had an AGM bank of just over 1,000AH but for practical purposes I wasn’t able to use more than about 25% of that capacity before recharging.  While my new lithium bank totals, slightly less, about 840 AH, I can easily use 90% or about 750AH before recharging.  That’s a tripling of  usable capacity.

On passage, with both plotters, many instruments and the autopilot going, we use, on average, about 8 amps which can deplete the batteries pretty fast in the overnight hours.   Happily, the new wind generator, in about 20kts apparent, now puts out enough energy to offset the entire suite of electronics.   Note that this is a 12v power curve so you’ll need to divide the amps by 2 to get the correct output at 24v.  In this case, the curve in 20kts of wind matches the house load for Pandora when we are underway, a huge gain when on passage. 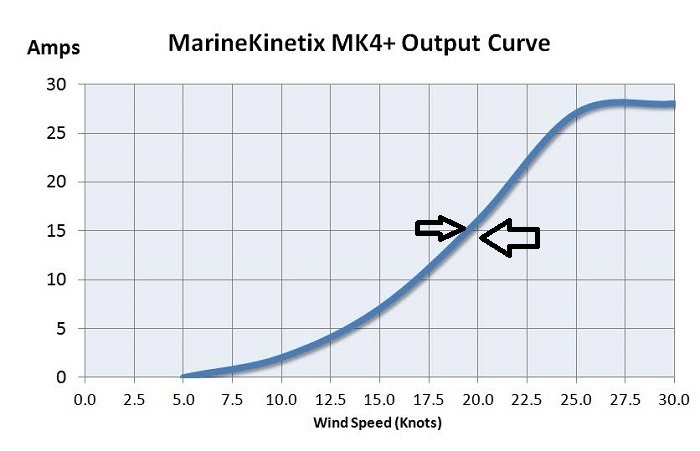 As the generator output matches exactly what the power curve of the unit is rated at, suggests that the new batteries will take power as fast as you can give them with virtually no resistance. 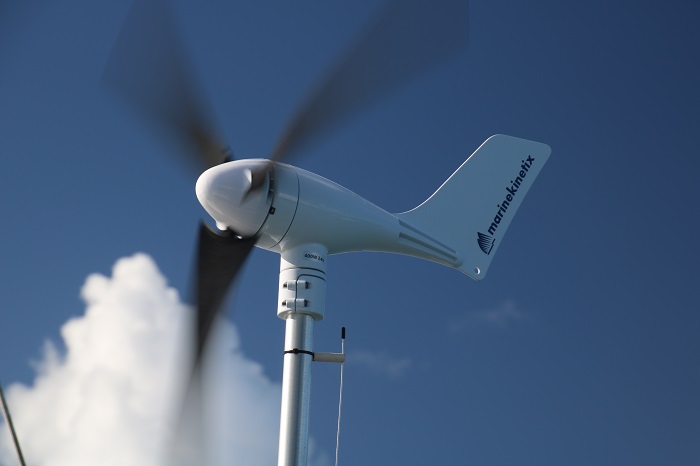 I chose the Marine Kinetix unit as a few of my friends have one installed on their boat and are happy with how well it performs and how quiet it is.   I also found Jeff in tech support particularly helpful as the install on Pandora was a a bit more complex being a 24v boat.

Having had a difficult experience with a wind generator years ago due to how loud it was, I have been thrilled with the fact that the unit is basically silent.  You can only hear a very slight hum when at anchor and you have to listen closely to even hear anything at all.   Under way, in any wind up to about 30kts when it begins to power down, the only way to tell it’s working is to look at the spinning blades and the amps that are showing on the controller.

In addition to the electronics and other equipment load that is covered by the wind generator, the largest load aboard Pandora is refrigeration and that was easily handled by the new solar panels.  I was surprised to learn that solar panels loose efficiency each year and in my case, the four older 80w panels were probably down to about 40 watts each so replacing them has made a huge difference.

The amazing thing was that on passage, once we hit the trade winds, the batteries were fully charged each day and never went below 84% of full at any point during the last 600 miles on our way to Antigua.  Amazing and way beyond what I had expected from the upgraded system.  No more daily running of the engine unless there isn’t enough wind.

I had heard that lithium batteries take a charge much faster than traditional batteries but to see this happen in the “real world” was impressive.

That’s pretty amazing and with even a reasonable amount of sunlight the solar puts back the power used by the refrigeration.

After messing with power issues for so long, it’s remarkable to see how much better things are now.  The lithium bank has made more of a difference than I expected as the batteries suck up power at a rate that I have never seen before.  Even if the batteries are nearly full, they continue to suck up all the power available right up to 100%.  That is so different than lead acid where the acceptance rate slows to a trickle the closer the batteries get to 100%.

Charging now takes a few hours to reach capacity verses all day, if at all, for the old AGM batteries.  And, having the wind provide enough power to cover the overnight usage on passage is a very big deal.

Sure, our energy needs continue to grow but I now have excess power storage capacity, multiples beyond my old AGM bank and now I can even keep everything fully charged on passage without running the engine, something that was never the case before.

So, with the wind generator spinning happily and those new solar panels sucking up the sun, Pandora is on her own for a few weeks, making ice and keeping that elusive beer cold along with a nice bottle of champagne to celebrate our return on December 3oth.

Fortunately, that rabbit hole isn’t nearly as deep as it used to be.