It’s time to head home for the holidays.

It was great fun being on the dock with all the Dawgs but yesterday I moved Pandora from English Harbor to Falmouth where she will sit on a mooring until Brenda and I return after the holidays.

It was nice to move over to where the water is clear and the first thing I did after getting her settled was to go for a swim, my first of the season.

Here’s the view I woke up to this morning.  It’s been a week since I arrived in Antigua but in a way, it feels like it’s been much longer. A beautiful way to start the day, complete with a rainbow. 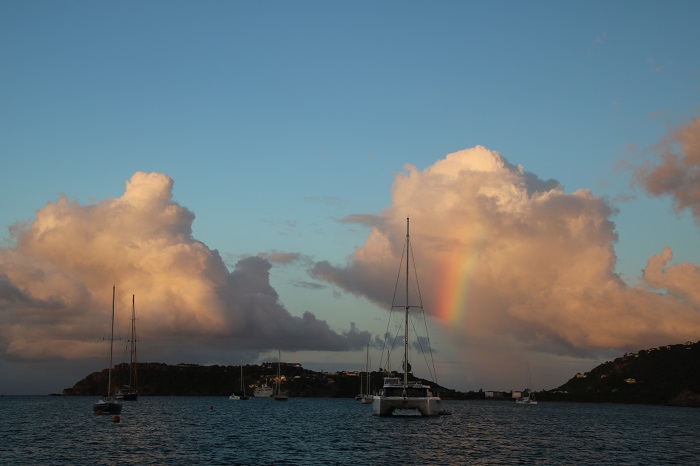 When I arrived a week ago Monday, ending a 9.5 day run from Hampton, I was eager to begin the daily events that I organized during the run south.  While I had spoken with all our supporters over the few months leading up to our arrival, the nearly two week delay in departing made it tough to know when we’d have enough boats in Antigua to begin having events.

As the fleet got closer and I had a pretty good feel for when we’d have “critical mass”, whatever that means in “party terms”, I began putting events to dates.

Fortunately, our partners here in Antigua were very willing to support us on short notice and jumped through some pretty big hoops to be ready to greet us with very little warning.

The staff of Nelson’s Dockyard worked hard to accommodate more boats than ever and we filled the place to capacity.  One issue that proved to be challenging was the need to plug in all those American boats that needed 110v as half of the dockyard is wired for European 220v, a problem for many in the fleet.

When we are on anchor there is no need for AC but when you pull up to a dock and the boat isn’t naturally pointing into the wind, it can get hot down below.  Marinus the marina manager and others in the Dockyard worked hard to accommodate the sweaty cruisers, but in some cases it took a few days to accomplish this and get power to all the boats.

Anyway, we’ve had a lot of events, sometimes more than two a day, and everyone had a great time.  Here’s a group photo of many that did the rally.  There were probably 100 more than this but crew generally flies out right away upon arrival. 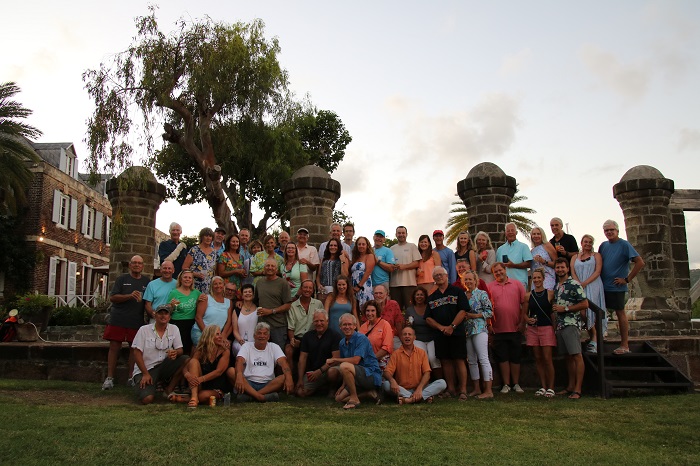 One of the highlight events was a few nights ago in Nelson’s Dockyard, a dinner event attended by more than 100.    The evening was wonderful and was hosted by Ann-Marie Martin, who runs the National Park system and has been a key contact for me over the years.

They went all out including a steel drum band. 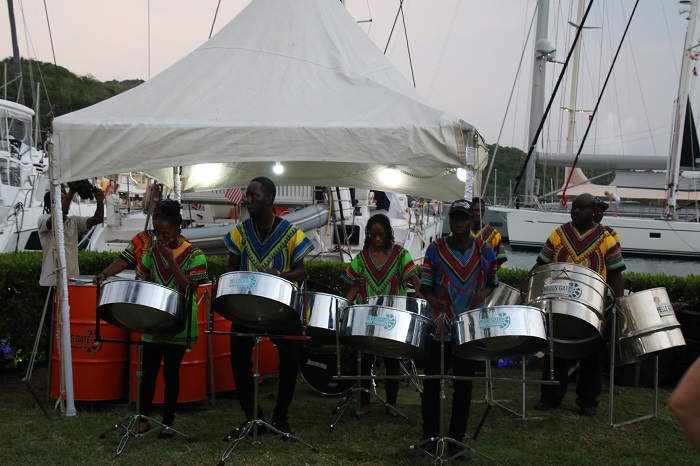 I loved the traditional dancers, including one on stilts. 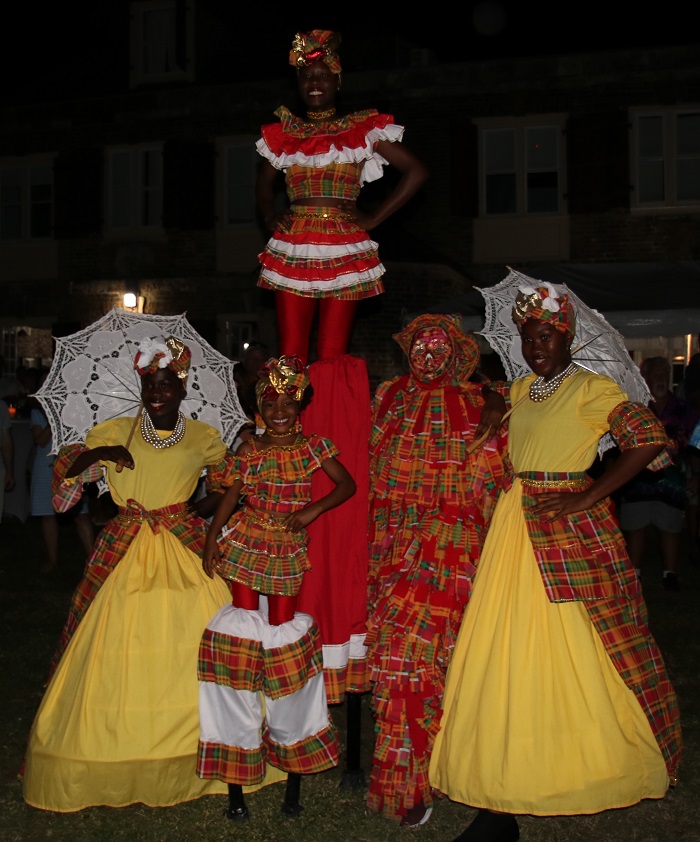 Minister of tourism, Max Fernandez, was also there and spoke to the crowd.  Between him and Ann-Marie, they whipped the crowd into quite a frenzy.

Next week is the Charter Boat Show, where all the big yachts show their stuff to charter brokers who come to the island to check out what’s available for their clients.  When you are spending several hundred thousand on a week long charter, sometimes more than a million, you want to know that it will be perfect.

A week ago the marina was empty.  Now it’s filling up fast.   How about this selection?   Pick one. 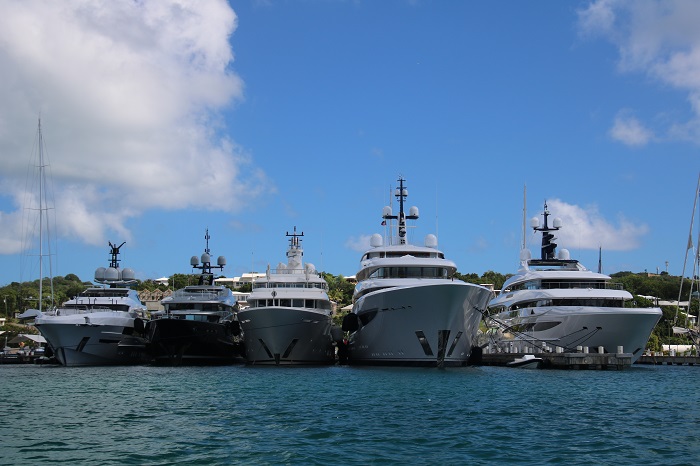 Not sure Eos is available for charter.  At about 300′ long she’s one of the largest sailing yachts in the world and is owned by Diane Von Furstenburg and Barry Diller. 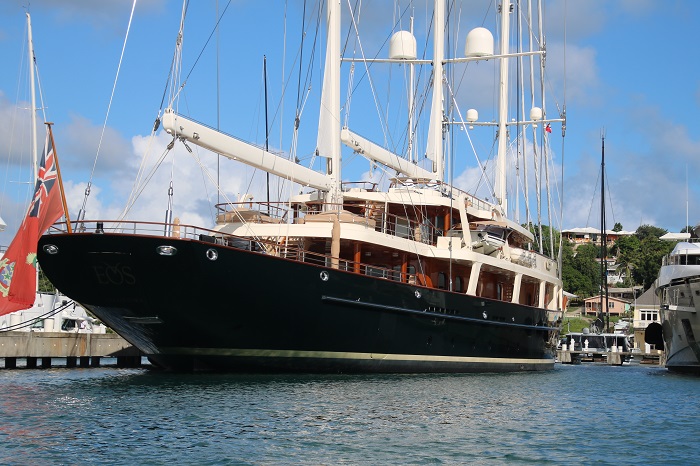 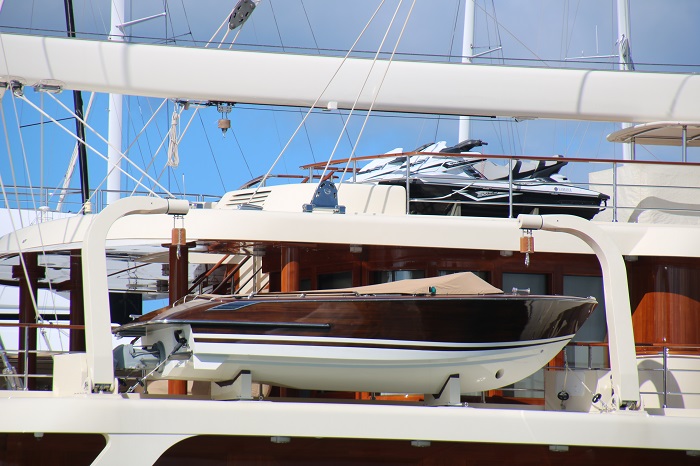 You get a sense of the scale of these yachts and this isn’t one of the largest.  It takes crew all day to polish them. 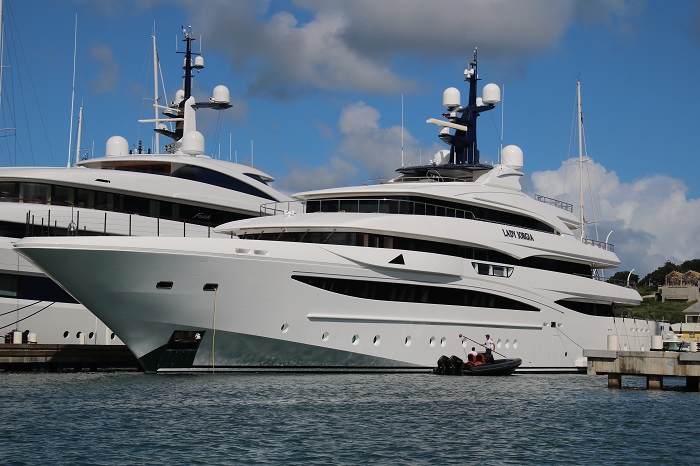 She is owned by a guy, Patrick Dovigi, a Canadian.  He’s only 43 years old and made his money in waste management.  I’ll bet they handle trash very efficiently aboard.

So, here we are and the big kids are now arriving, day by day and soon there won’t be an open slip to be had.

As much fun as it’s been to be here in Antigua, I’ll admit that it was a bit of a downer that Brenda wasn’t here with me.  As we were so delayed, she had to stick close to home with the holidays looming large.

I am looking forward to heading back home for the holidays tomorrow.  I will put Pandora on a mooring where she will remain until we return around the new year.  With the new battery bank, wind generator and solar array, there won’t be a problem keeping the freezer and fridge nice and cold.

It’s been a whirlwind week and next week I’ll begin planning some events for January and throughout the season.  No rest for the weary cruiser.

It’s been great fun being here and I look forward to a season of cruising when Brenda and I return to Pandora.

One response to “It’s time to head home for the holidays.”