Lazing around for the summer? Not!!!

It’s Sunday morning and I have done it again.  I have lapsed for weeks since my last post.   Yes, I have been bad.

Well, there’s been a whirlwind of stuff going on since we returned from the Bahamas.  How I long for the lazy days with not much to do.  I won’t talk about how big my lawn is but let’s say that it takes more than one bag of fertilizer to cover it with one application.  Enough said.

Anyway, since my last post we successfully had a great SSCA (Seven Seas Cruising Association) rendezvous with nearly 60 in attendance and some coming by boat from as far away as VA.  And, that’s not including folks like us that had spent their winter in the Bahamas and came to Essex on their way to Maine.    This event is one that we have been having annually and will continue doing here going forward.  We hope to have 100 attendees in June of 2015.  We had a number of terrific speakers over the three days of the event and I’ll be writing about one in particular, a sailor who performed an at-sea rescue last year in the Bermuda 1-2.  His talk was very moving and I expect to write about his amazing story soon.

Beyond spending time on this event and all that led up to it, I was also studying for my HAM radio Technicians exam, which I passed.  YEAH!   I have very much wanted to have a HAM license since getting my SSB radio a few years ago and it feels good to have passed it.  I read the book, a number of times, over the winter (during those not so busy days aboard) and studied like mad for a few weeks prior to the exam.  Now I’ll be studying for the next level.  I expect to take the next exam in Annapolis at the SSCA September Gam.   Wish me luck.

I also decided to GIVE UP on my MaxProp, which has given me fits for as long as I have owned Pandora and sprung for a new Autoprop.  My MaxProp has been rebuilt TWICE in just a few years and I was still getting vibration in the drivetrain.   Yes,  I have written, and whined, time after time about this so finally I said “ENOUGH” and purchased an AutoProp.

It’s a very odd looking propeller with three blades that each can spin 360 degrees on the hub.  For the life of me, I can’t imagine how it works.  Beyond that, I can’t fathom how someone even thought of the idea.   However, I have a few friends with one and now that it’s installed,  WOW!

It’s amazingly smooth under power and I have gained more than a 10% efficiency in speed.  That’s sort of like getting a 10% discount on fuel I guess.  Anyway,  I am also told that the pitch of the propeller adjusts automatically as the boat speed and sea-state changes.  I am very much looking forward to seeing how it works in various conditions.  I’ll find out soon as I am leaving for New Bedford today.  More about that soon, read on.

Anyway, here’s a  photo of the AutoProp installed and in “normal” operational mode.   Looks normal, right? 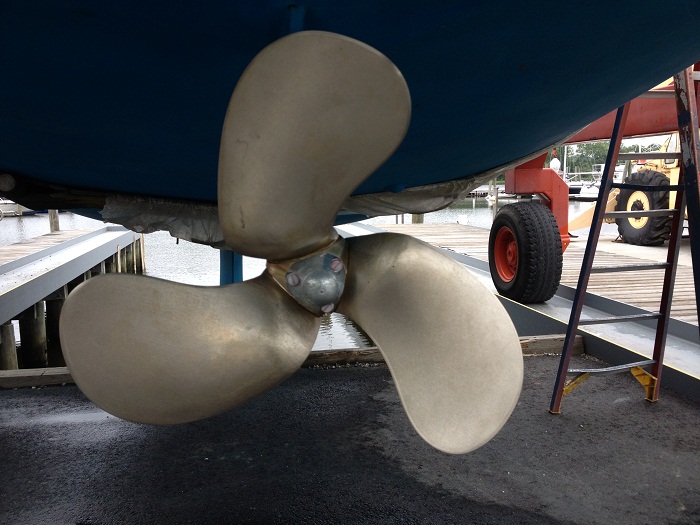 And, when you stop the engine, the prop blades rotate a bit and go in line with the water going under the boat.  Normal again… 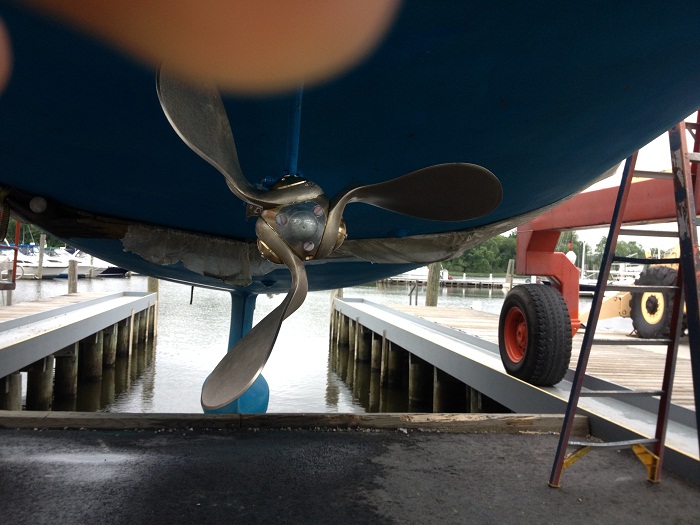 However, the weirdest part of all is how the bladed can flop around at at random when the boat is sitting still.  Now that looks very odd. 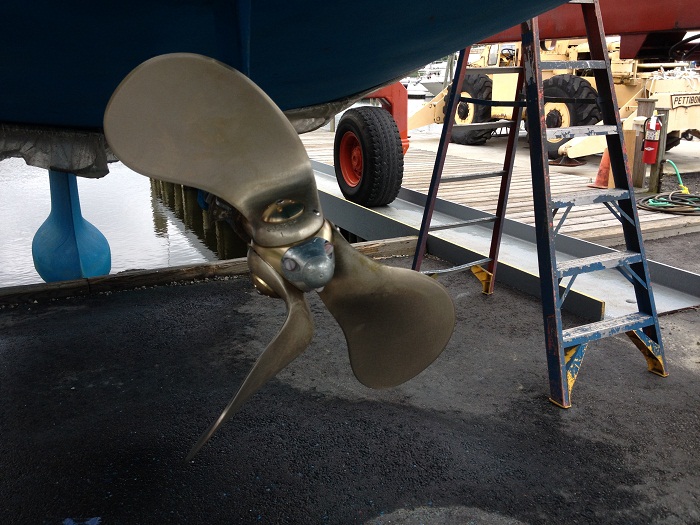 It’s hard for me to imagine just how things line up and work when the blades can orient themselves any which way.  However, it works and the actual blade alignment changes based on the RPM of the engine and the pressure on the blades.  I guess it’s like a thermos keeping liquids hot or cold, “it just knows”.

However, the most amazing thing about this propeller is just how much it costs.  Without being crass and giving the exact amount, let’s just say that it cost nearly as much as my first new car.  Yes, that was a long time ago, but still…

Happily, the propeller vibration problems are now history and Pandora will surely be happier now when the engine is running.   Me too.

So, what’s next?  As I wrote about a few weeks ago, the Charles W. Morgan whaling ship is in New Bedford for a few weeks and I am going to head up there to see her.  It’s been nearly 100 years since she last called on that port, when she was an active whaling ship and it will be fun to visit.   This video is of her leaving Mystic Seaport where she’s been since the 1940s.

Here’s a video of her sailing for the first time in 90 years.    I expect that you will agree with Brenda that it’s about as exciting as watching grass grow.   Well, wait a minute, this surely isn’t something that you see every day.  Right?    But don’t fear, it’s only 1.5 minutes.  You can handle that I hope.My good friend Patty has a house on the water in New Bedford harbor and has offered for me to put Pandora on the mooring for a bit.  So, today my friend Burt and I will make the run from the CT River to New Bedford.

It will be good to put Pandora back in commission and sailing again.

So, I hope that you are convinced that I am not a slug lounging around in my lawn chair and shirking my “blog post duties”.   I have been busy, indeed.  Now it’s time to do a bit of sailing.

Perhaps I’ll close with some historic footage of the Morgan back in 1926, surely a simpler time.

Here’s to fair winds.  More to come and soon…