Newport and the America’s Cup Trials

On Friday I visited Newport with a friend and had a great time watching the trials for the America’s Cup.  These boats are not the same ones that will race for the cup itself as they are around 45′ long and the cup boats will be over 70′ long.  Don’t ask me why they will dump these boats and go to longer ones.  It’s too complicated to keep track of these guys and all their rule changes.

Back to Newport.  I have to say that they have done a terrific job of making the cup a more compelling spectator sport with this new venue.  They have been staging “trials” in a number of locations world wide with the current races in Newport over several days.   The course is a very short one, perhaps a mile long and a half mile wide with the entire course within easy viewing of shore.  To see these boats shoot by at some 20kts is really a sight to behold.  Some lament the demise of the old style monohull but to me, the cup races are a lot more exciting now.  And, if you are lucky, you might even see one capsize as happened on the first day of racing.  Call this the water equivalent of NASCAR racing perhaps.

The first thing that we saw as we headed over to Fort Adams, the viewing area, from the Newport Yacht Club was the boats on moorings getting ready.  They are really high tech machines.  I expect that the tenders themselves cost more than Pandora, my SAGA 43.   The boats, especially the American boats from Oracle, look even more “nasty” in black carbon fiber. 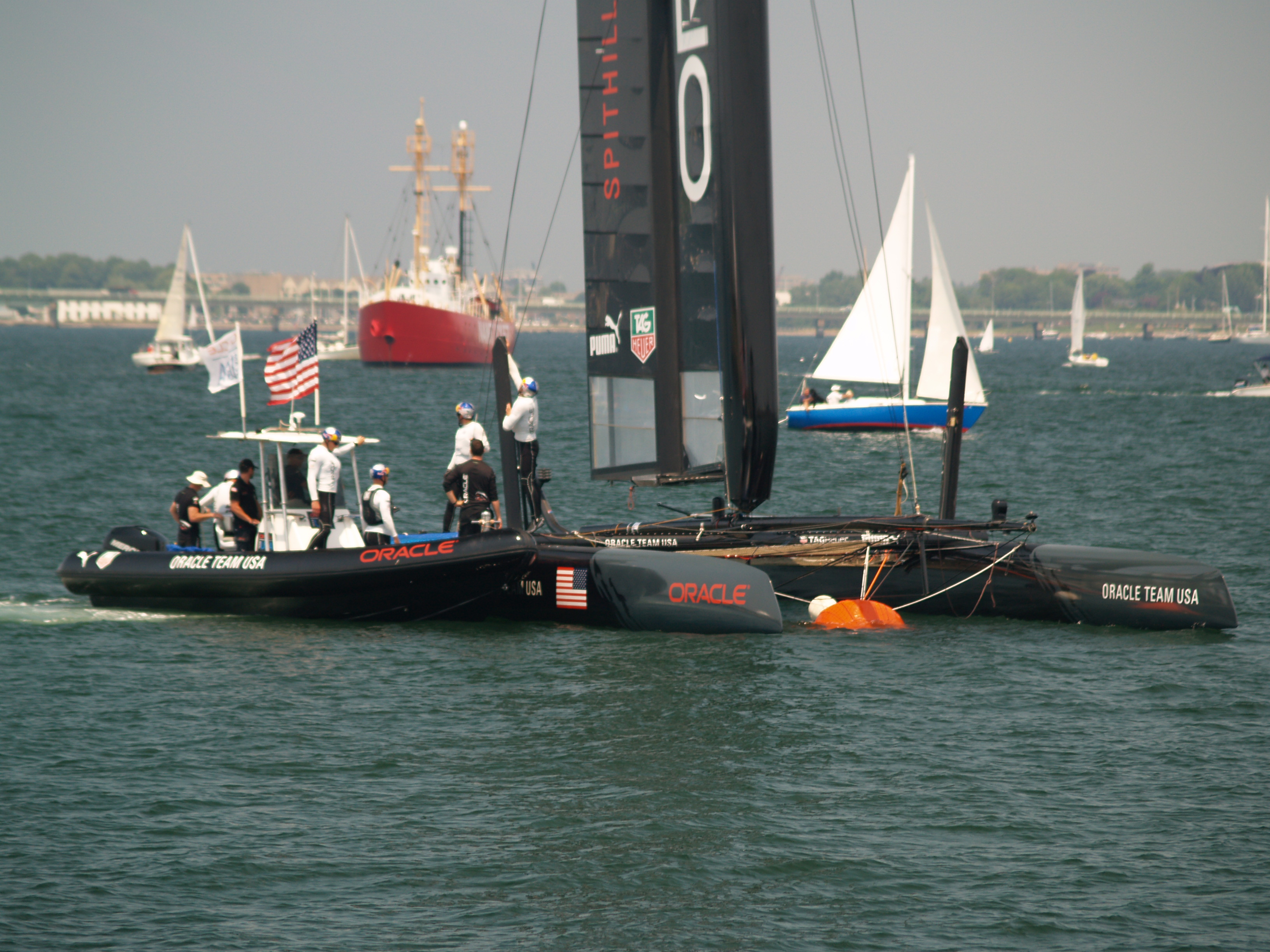 There was plenty to look at with sponsors all around.  One of the major sponsors is Red Bull energy drink.  Very appropriate given the frenetic nature of sailing these boats.  Nice vehicle. 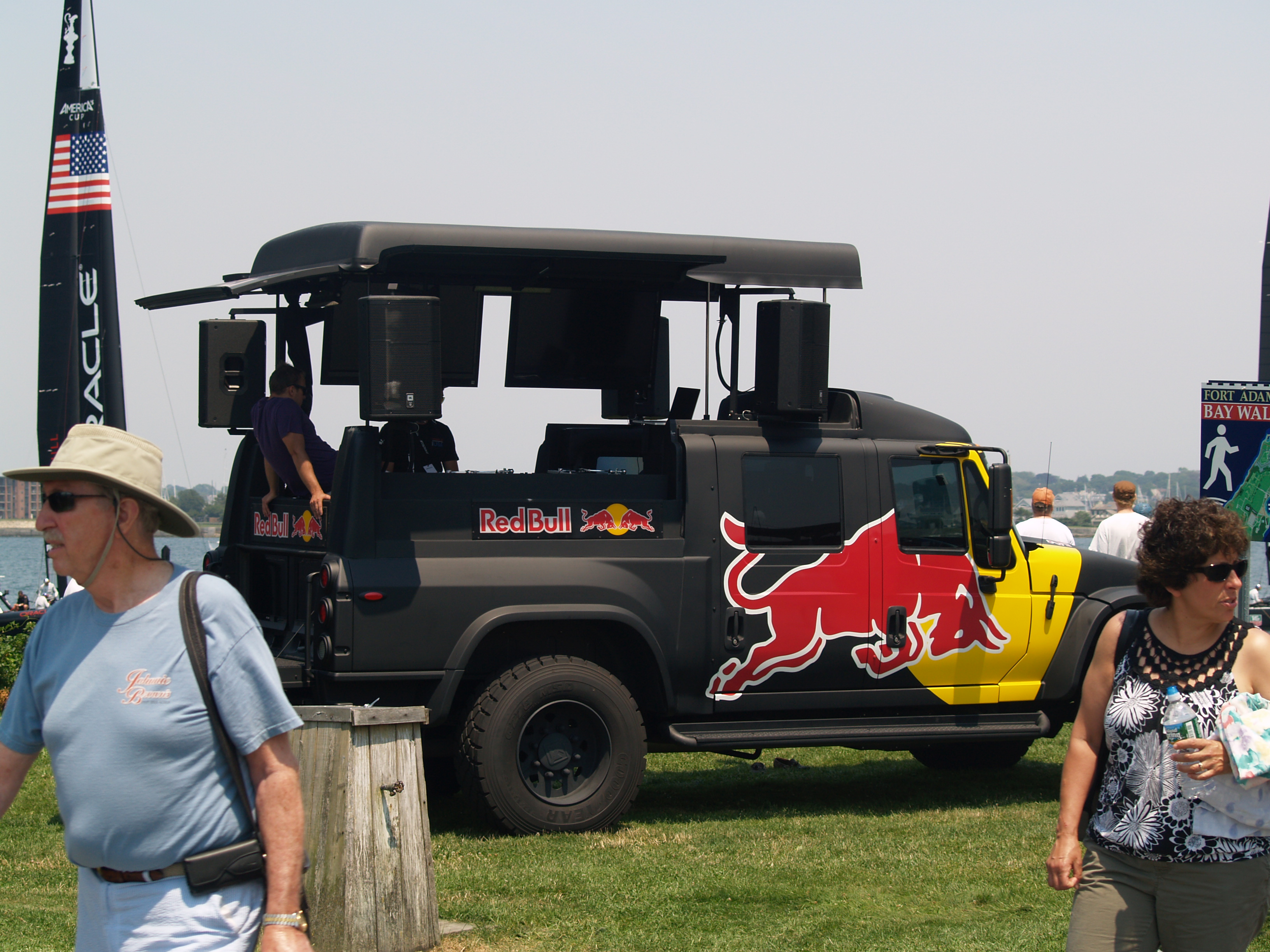 Plenty of potential consumers to see the displays.  In spite of so many folks crammed together, it was easy to get a spot with a good view. 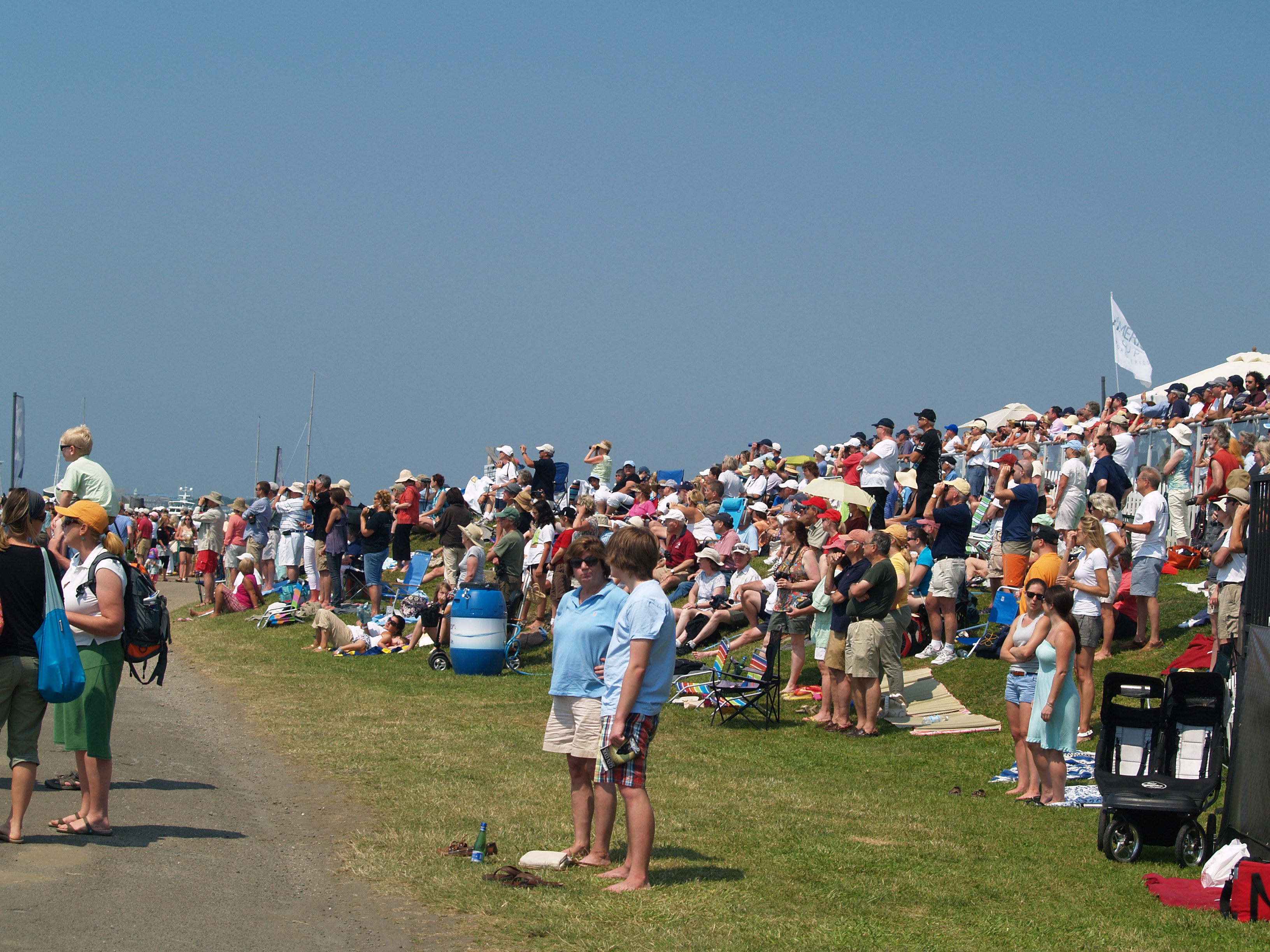 Once on the course these boats really show their stuff. Hulls flying in a very modest breeze.   This boat is from France. 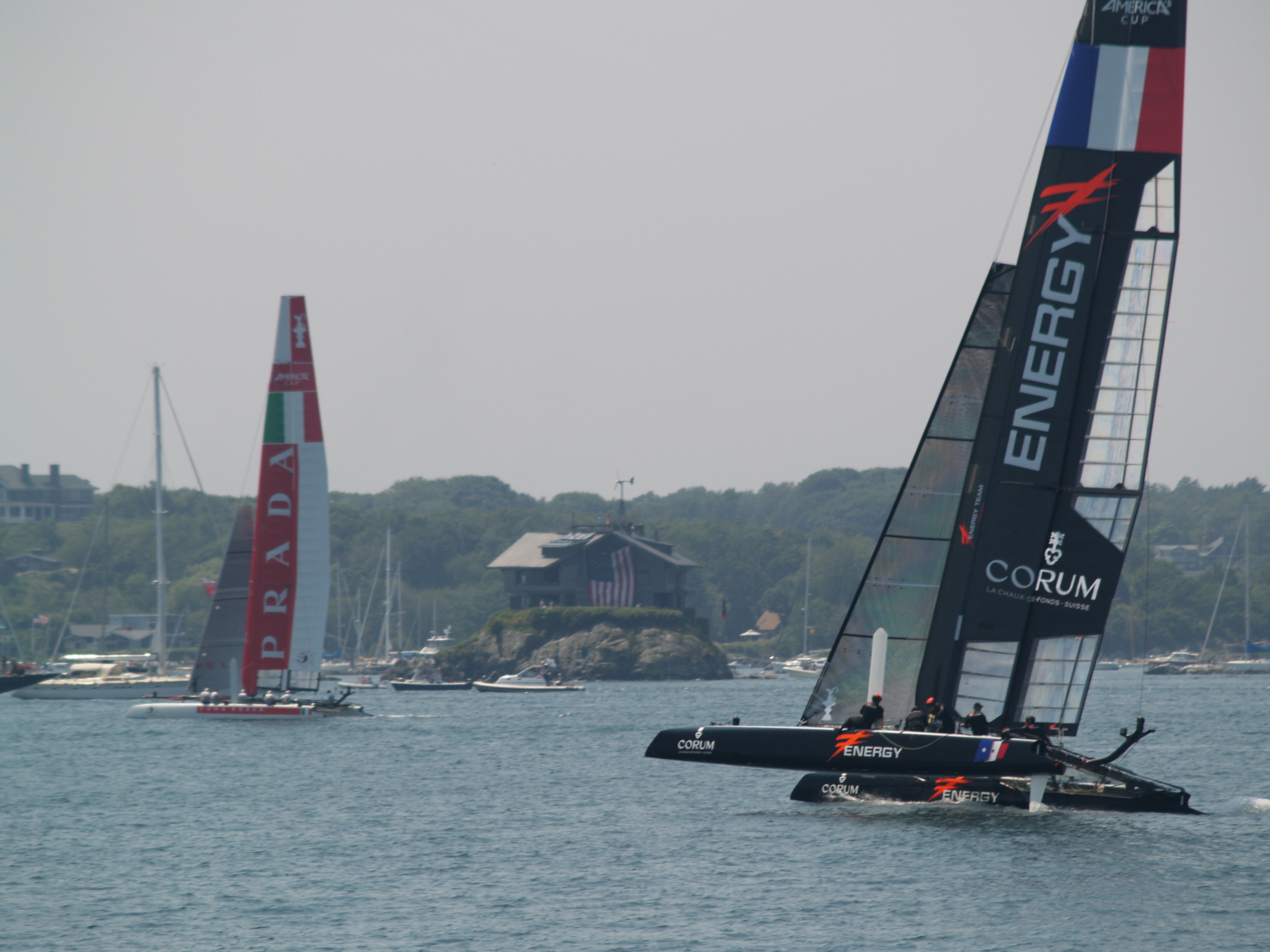 Prada looks great as one would expect.  Very stylish but not as sleek as Oracle in her black paint. 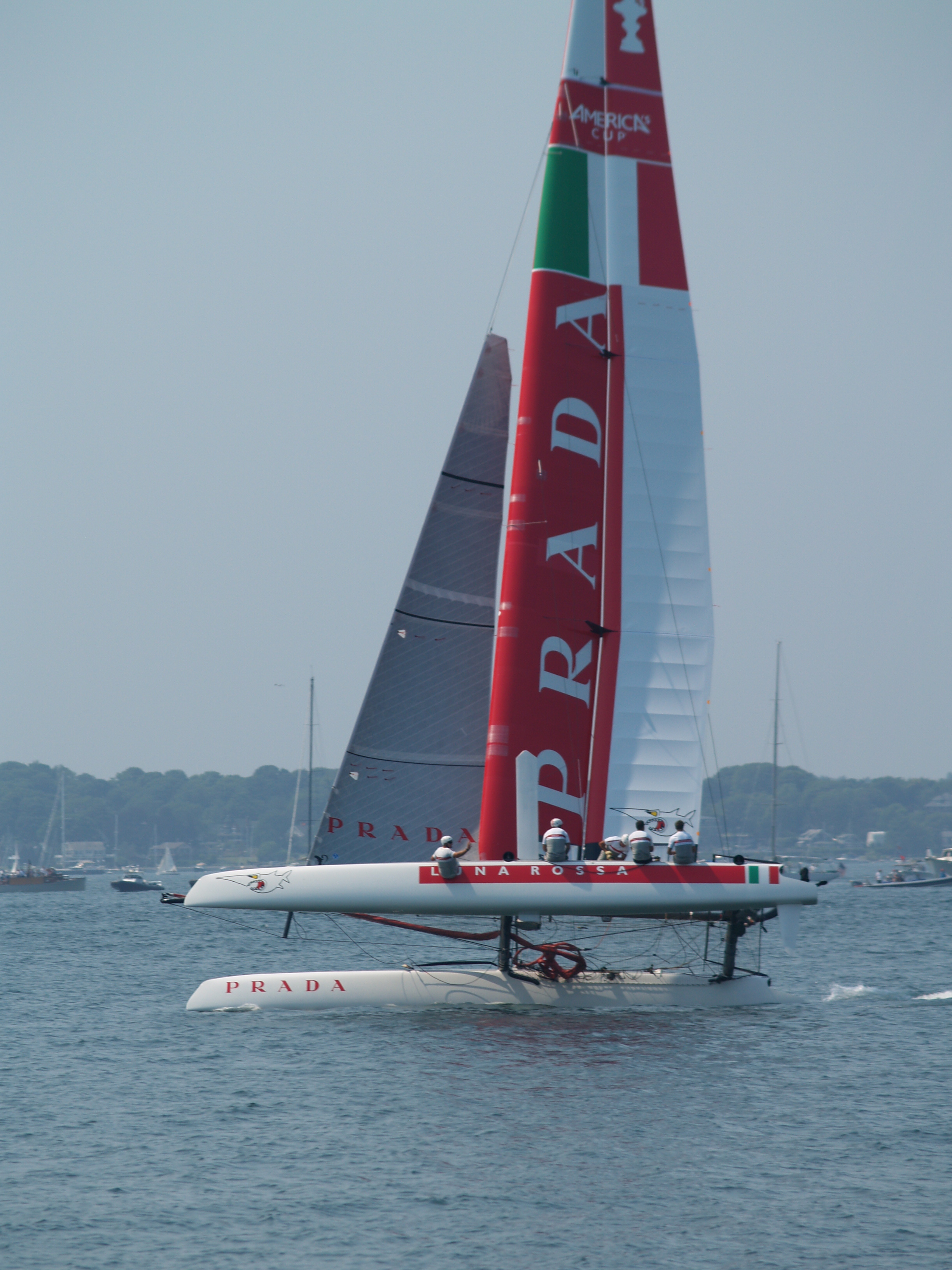 While most of the races were match, meaning two boats racing at a given time, the final race of the day was a fleet race.  What a mob scene, with all the boats starting at once.  And to make it more exciting for the crowd, the start had them all headed directly for the crowd and tacking just off the breakwater.  What a great sight.  Amazingly, they didn’t hit each other. 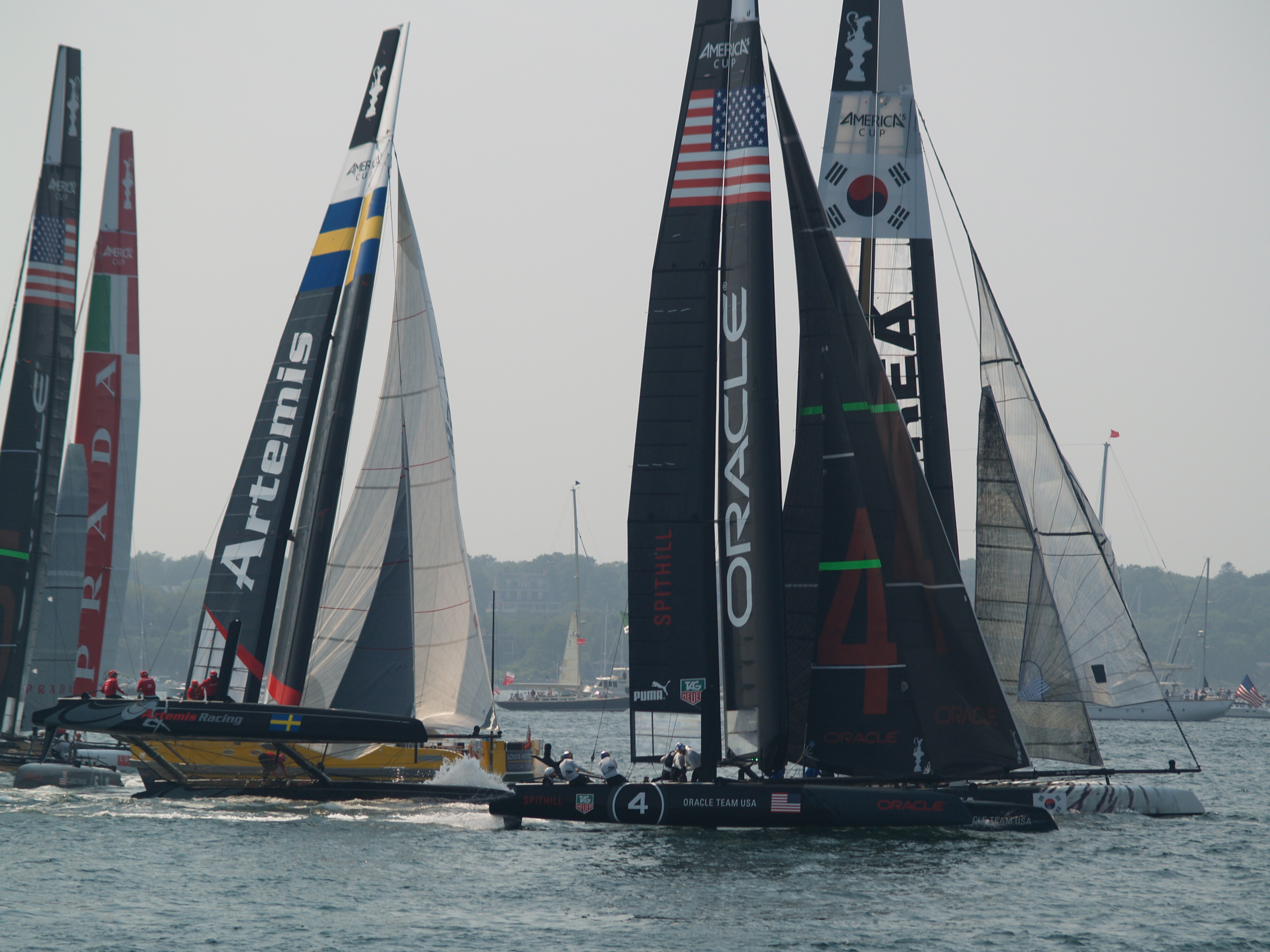 After tacking so close they all headed off toward the first mark. 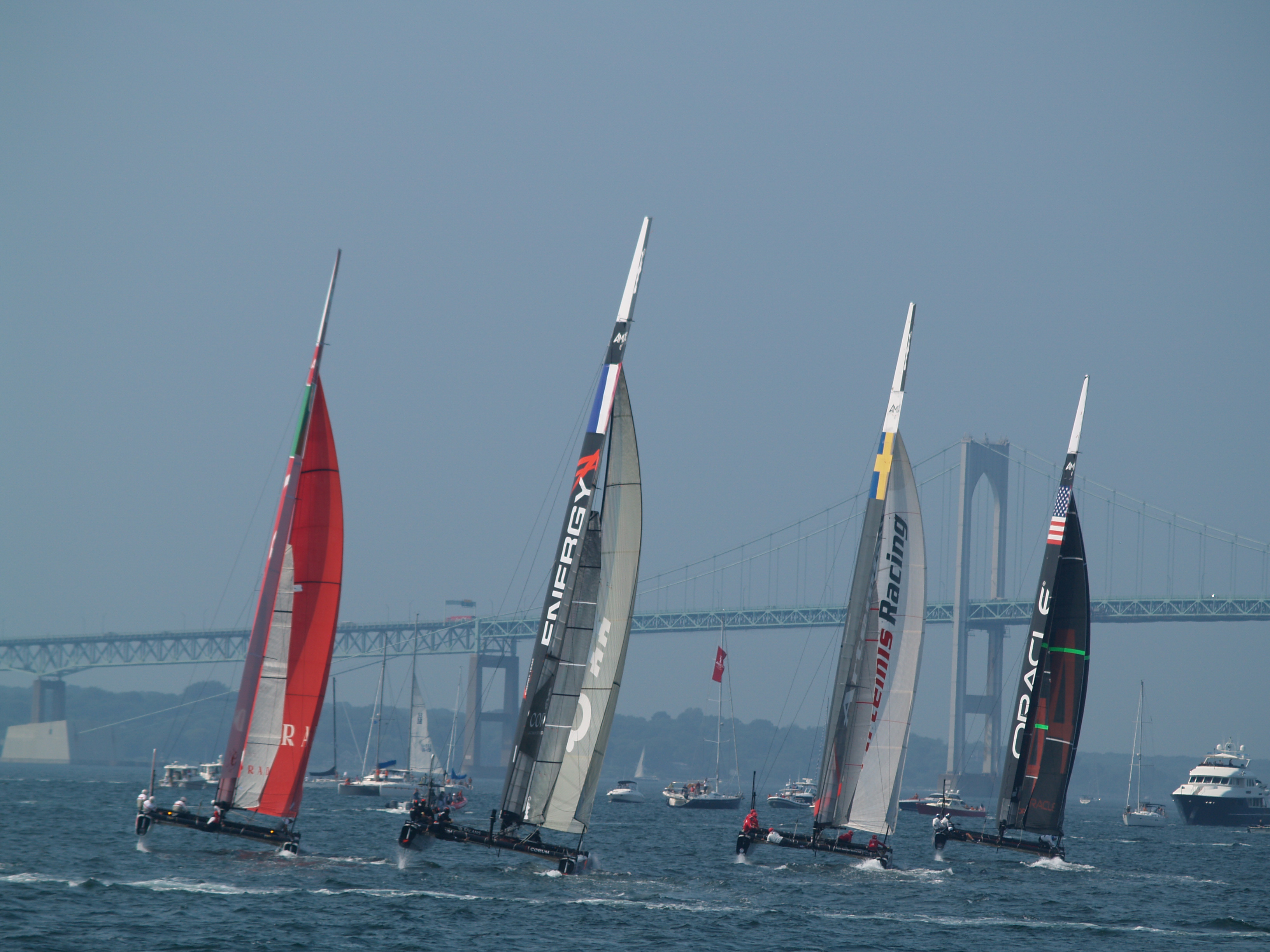 After the races the boats headed back to their moorings in the harbor.  I was struck by the contrast of the current boats verses one of the classic 12 meters that used to race for the Cup, in wood no less.   Just a little different wouldn’t you say? 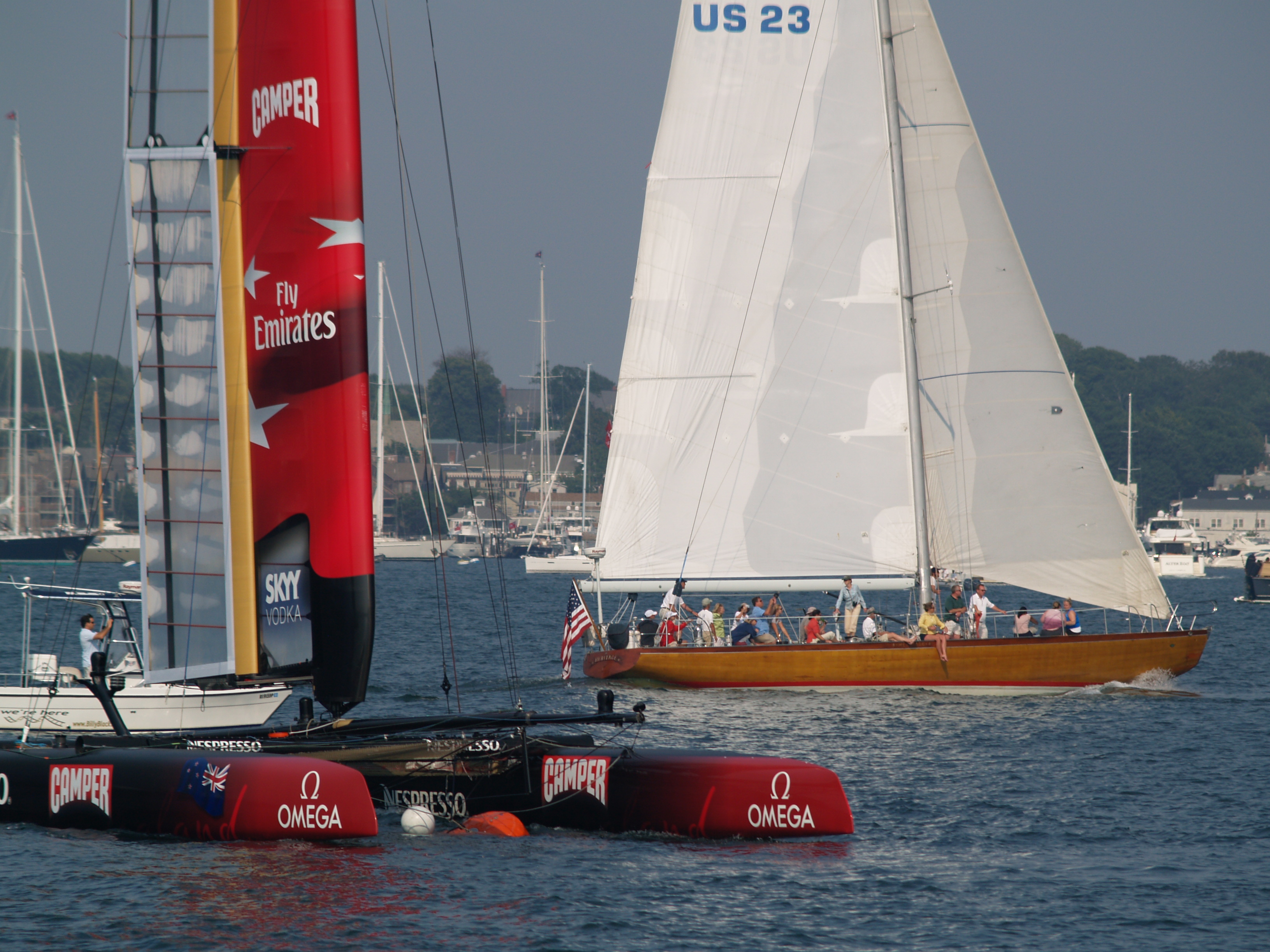 One thing for sure is that the current approach to the Cup will reach many more than past races that had become somewhat marginalized in most people’s minds I expect.  This video is an example of the “showmanship” that has become a part of this event.  A great approach for the “Youtube generation” in my mind.

And for a moment of “I was there”, here are highlights, in a somewhat longer format, of the day of racing that I enjoyed.   It does look great in this refined presentation with terrific graphics, but being there was even more fun.   And, the crowds were pretty amazing.

After the races we headed back to the New York Yacht Club for a beer and to hear a talk by Gary Jobsen, well known sailor and the commentator for the race series.   Glad to have friends like Ken that belong to such great clubs.   Besides, getting in the club launch allowed us to avoid waiting in line for an hour with all the “regular folks”.  Not bad.  We heard Jobsen speak in the white tent on the water just below the “club house”.   Club house?  That seems like a funny term for such a grant building.   Very nice indeed. 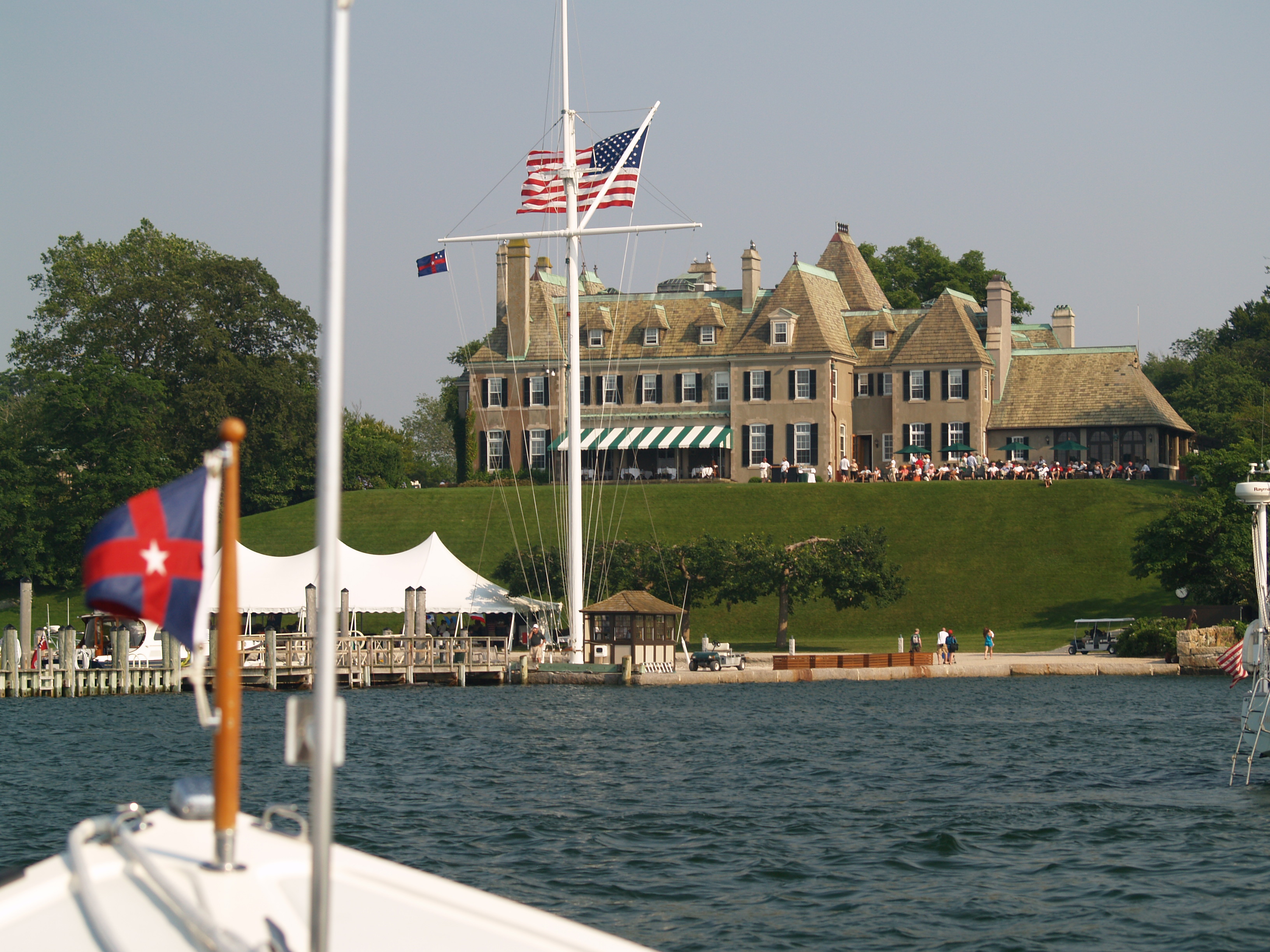 On Saturday Ken and I headed to Mystic to see the Wooden Boat Show, a great event at Mystic Seaport although very different with the smell of tar instead of the gleam of carbon fiber.  More to come on that soon.