A new way to enjoy your boat! Keel walking? Are you kidding me?

I just love the ways that the big boys use their boats.  What better way to make more room for passengers (well dressed of course) than spending a bit of time standing on the keel. 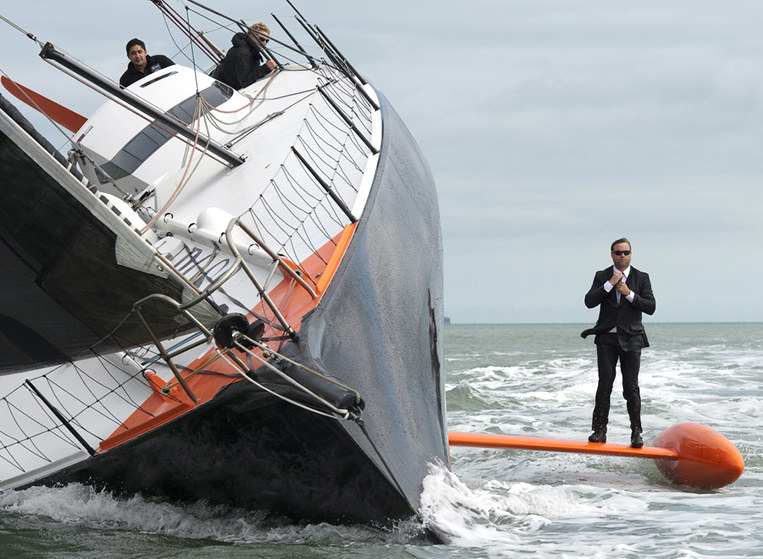 This is Hugo Boss, one of the big ocean racers and that’s Alex Thomson, the leader of that sailing group.  He’s not even 40 year and is no sailing slouch as he owns the world record for a 24 hour run in a monohull at some 500 miles at an average speed of over 20 knots, that’s nearly 25 MPH.  Not bad. Pandora? The fastest I have had her at a sustained speed is just a tad over 10 knots, and it was only in spurts over a several hour period. Normally, Pandora pokes along at a respectable 7 knots.

Who would even think of standing on a keel? I fear that my older son Rob would.  Actually, he’s climbing, and camping, on Mount Washington this weekend.  Isn’t it winter?

It’s worth checking out the Hugo Boss racing site.  What an awesome boat!!!  And, you have to love the shades on Alex.  I wonder if he likes his martinis shaken, not stirred?

However, if you think that it’s all fun and games, this video shows the boat at speed.  Not sure the keel walk would work in these conditions.

I wonder if Brenda would enjoy such a sail?  Perhaps not.  As I used to say in my, shall we say mere youth, “don’t get my wet”.

Would it help if I painted Pandora Black?

Oh, and by the way, the reason that the keel on Hugo Boss is painted international orange is so that if the boat  looses it’s mast and turns turtle the rescue folks can see it better in the storm.   Not sure that the black hull would show up all that well.   Hmm…