Paying it forward and the layup from Hell…

Over the years, more times than I can count, cruisers have gone out of their way to help as Brenda and I ventured further afield, cruising new areas.  When we went “international” with visits to the Bahamas, Cuba and most recently, the eastern Caribbean, this help became more important than ever with fellow cruisers always willing to lend a hand or offer advice.

Our first real contact with the cruising community was at Gams, events, put on by the Seven Seas Cruising Association, SSCA,  in 2012 on our first trip down the  ICW.  Among the first of these events was at the SSCA Melbourne Gam in FL where we met many cruisers, some of whom remain fast friends to this day. 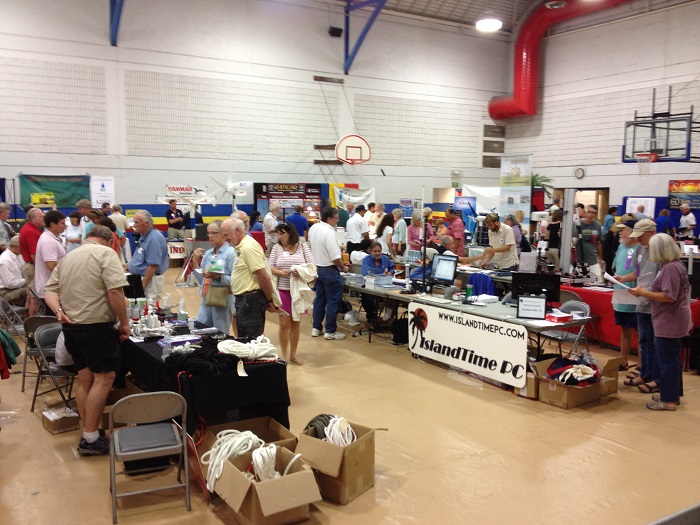 Along the way we have been given great advice on how to prepare for for travels to far away places, lent cars, helped with laundry, shopping and were guests at their homes and yacht clubs.   Others spent months traveling with us, “buddy boating” along the way, as we learned the ways of living aboard for extended periods.

Among the most memorable for us are Harry and Melinda of Sea Schell and Bill and Maureen of Kalunamoo.  Both couples stayed close as we made our first trip down the ICW, crossed the Gulf Stream and explored the Bahamas in 2012 and 2013.  Here’s Brenda on a beach, shortly after our arrival in the Bahamas, near Nassau with Harry and Bill. 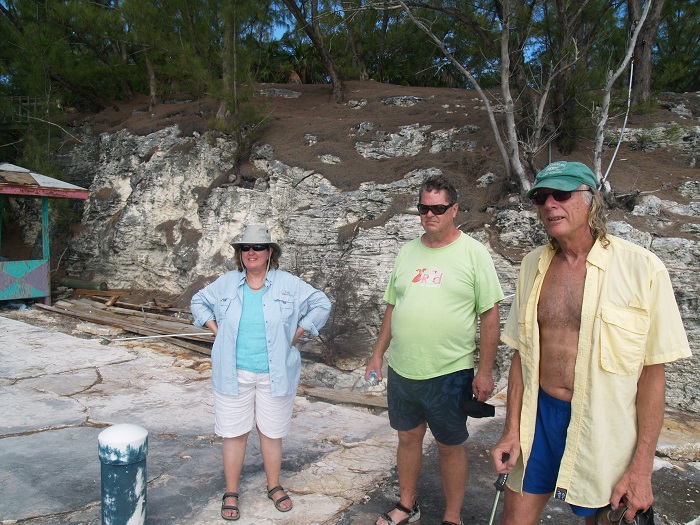 Before crossing to the Bahamas, where we cruised with both couples for much of that first season, while we were waiting in Ft Lauderdale for a weather window to cross to the Bahamas, they treated Brenda to a much needed celebration on her birthday.  She was feeling more than a bit homesick and it really cheered her up. 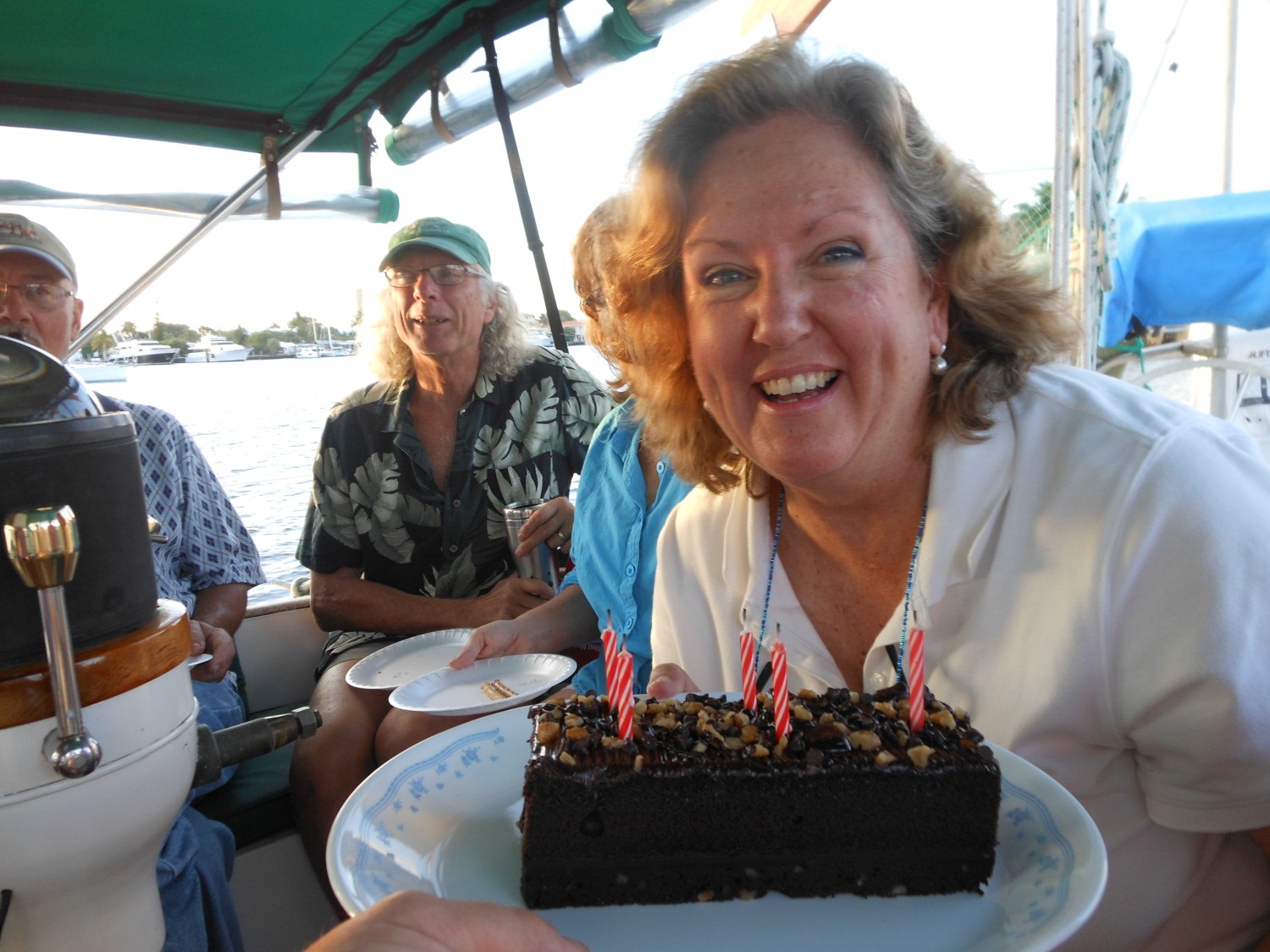 With all the help and nurturing that we have received over the years from the cruising community, I have felt compelled to do what I can to “pay it forward”.  The idea of “doing to others as they have done to you” is nothing new, but in many ways, it is perhaps one of the things that what makes the community of people who live on small boats so special as so many that we have met over the years clearly feel the same way.   In the SSCA, this is called “leaving a clean wake”.

When Brenda and I headed south back in 2012 for our first “big kid” trip down the ICW and on to the Bahamas, we were very touched by all of the help we received as we came in contact with some of the most generous people we had ever met.

Based on this experience I decided, more than seven years ago, that I would host, with the hope of my fellow SSCA member George, what became an annual Gam in Essex CT for cruisers at the Essex Yacht Club.  I also decided to sign up as an SSCA Cruising Station Host and more recently, port officer for the Ocean Cruising Club, again to help members of those two groups when they visited Essex.

A few years ago I also joined the board of the Salty Dawg Sailing Association and worked out all the details for an annual arrival of the rally fleet in Antigua.  I now serve as Port Captain for the fleet’s arrival every November when perhaps more than 60 cruising boats will make landfall at the island.

I have also spent considerable time giving talks and writing for various publications, all with the hope that I can inspire those who might be thinking of “casting off the dock lines” to do just that and head out.  In my way I continue to try and help others as others have inspired us over the years, to try and pay it forward.

Fast forward the seven years since our first Gam in Essex and last weekend George and I hosted our Open Blue Water Boat weekend, the biggest yet.  This year’s event was a bit different as we decided to include, in addition to SSCA, members of the Ocean Cruising Club and Salty Dawg Sailing Association.    We also narrowed our focus to blue water sailing with a bit of “where to go” thrown in to round out the mix. 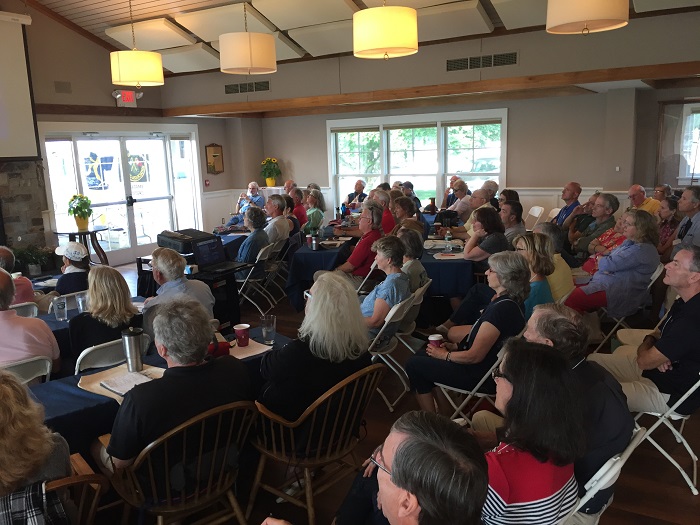 Sailors came from all over by land and sea, with about 20 boats and crew arriving by boat.  I thought it would be fun to display a selection of “well traveled boats” so that attendees could see, first hand, the types of boats that make long ocean treks.  I selected six representative, well traveled, boats to be on the docks, open for tours and it turned out to be a great idea.  Unfortunately Pandora, also a great cruising and blue water boat, wasn’t on display as the canvas guy, after months of promises, had still not installed the headliner, to my extreme distress.

However, we had some great boats on display including Misto, arriving in Essex less than a month after completing a 2 1/2 year circumnavigation beginning and ending in St Lucia.  She’s a great example of a modern catamaran, so popular with the cruising set these days. 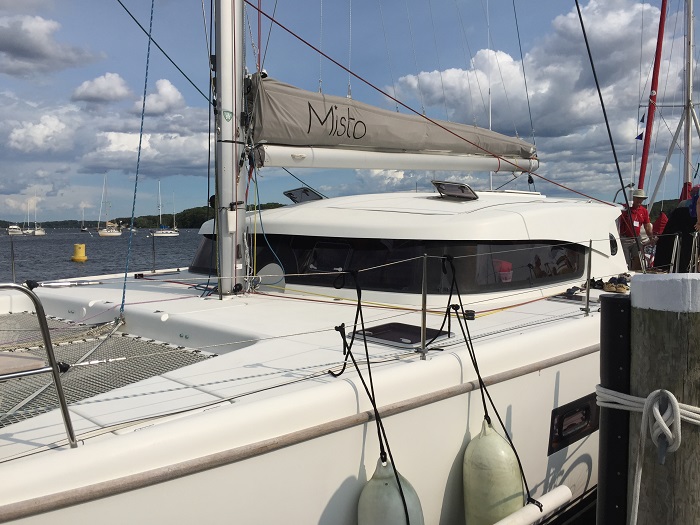 I was particularly intrigued with this lovely Joshua 40, painted in the red signature color of the original Joshua that Bernard Moitessier made famous for being perhaps the fastest boat in the Golden Globe around the world alone, non-stop race back in 1968.  I say “probably” the fastest as he decided, when he neared the end of the race, to drop out and just go around again.   Many boats of the “Joshua” design were launched along the way and this one, Petronella, is  particularly well kept and likely more fully fitted out with all sorts of modern equipment than Bernard’s Joshua. 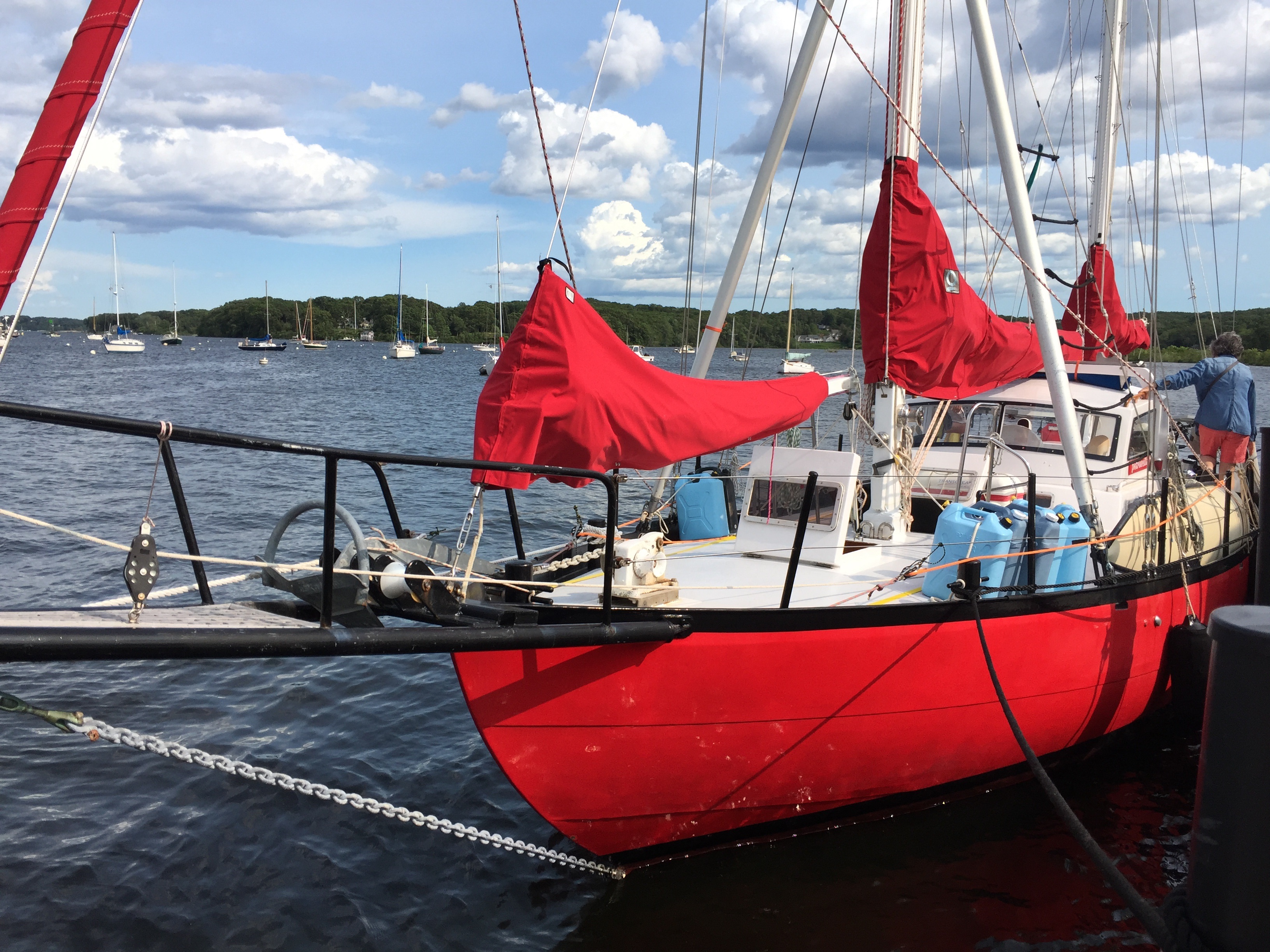 This catamaran, Angel Louise, owned by the current president of SSCA, has a lot of blue water miles under her keel and some unique accomplishments having completed the “great loop” on the waterways of both the US and Western Europe. 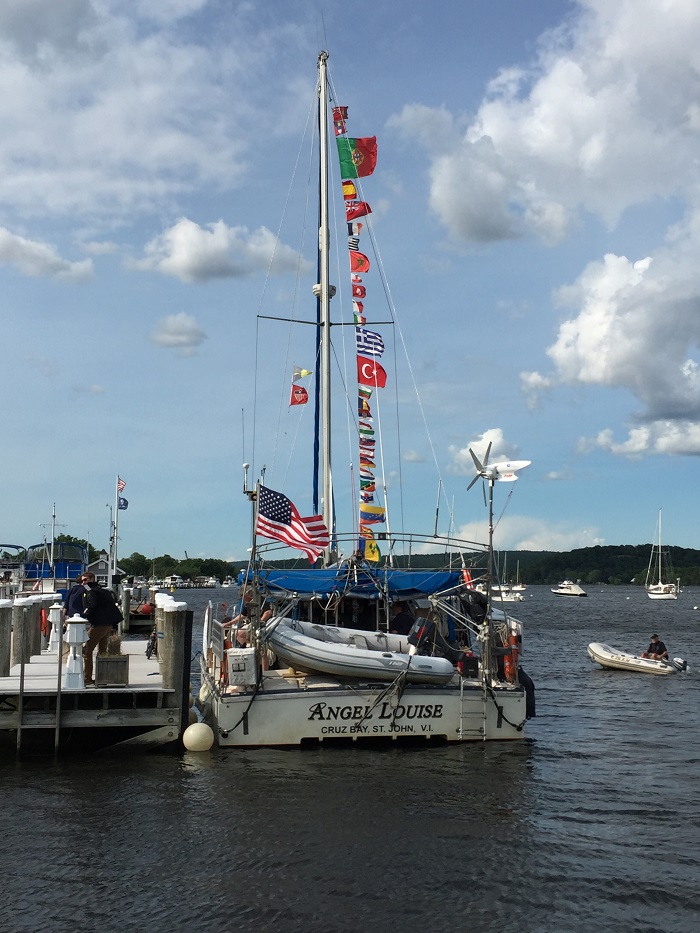 The US great loop is an interesting inland trip and there is a group, the America’s Great Loop Cruiser’s Association, dedicated to this effort, once again proving that if you are not a member of at least one association, you are not trying hard enough.  They call themselves, fittingly, Loopers.  While very little of this voyage qualifies as blue water, it is impressive, never the less. 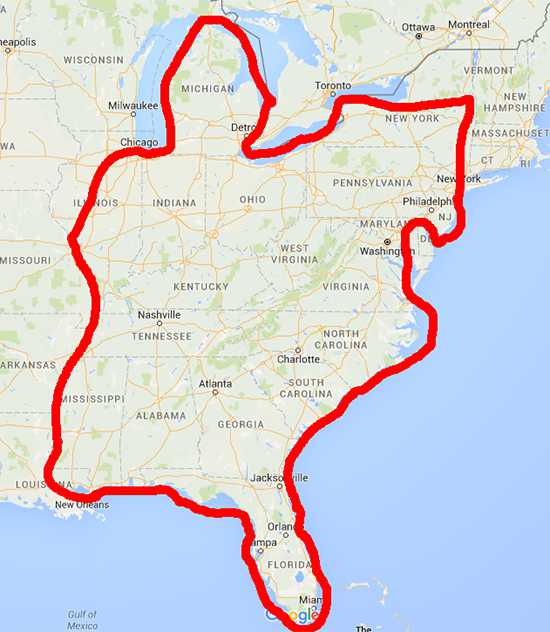 I had never heard of the western Europe loop.  It’s too, is quite a trek, with a good deal of blue water sailing thrown in. 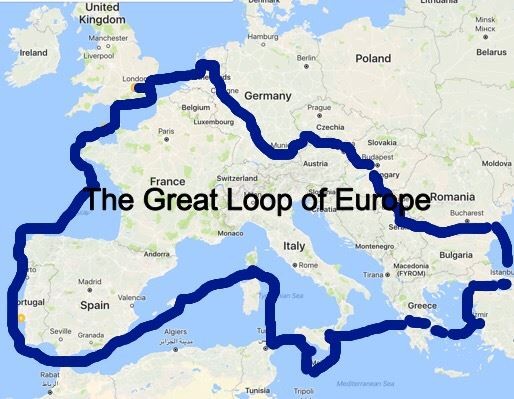 With modern cruising boats growing in scale every year, I was thrilled to have this little gem, Entr’acte, on the dock for tours.  Her owners have cruised far and wide, with thousands of blue water miles to show for their nearly 20 years aboard. 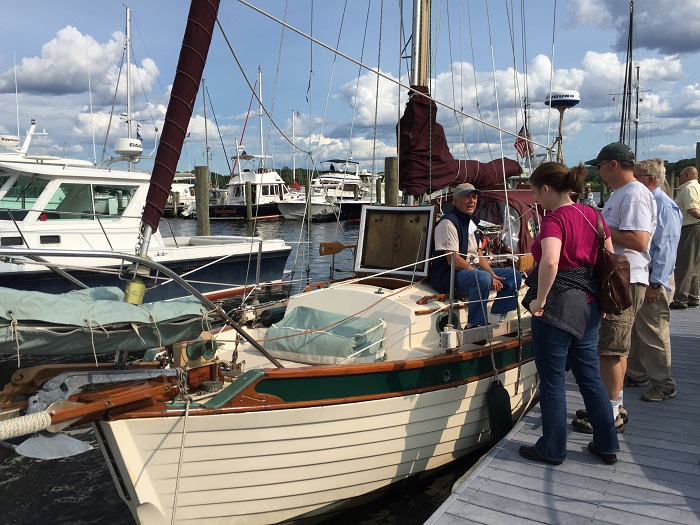 She’s beautifully fitted out for long distance cruising and there’s even an aft cabin for some privacy, something that is in short supply on a 25′ boat. 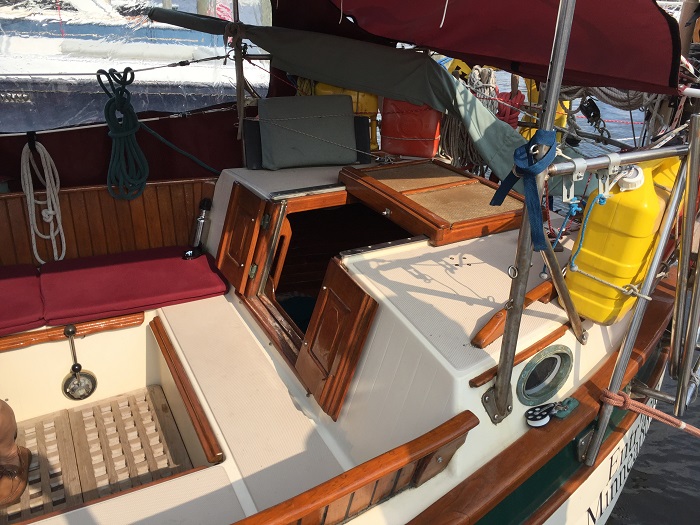 Co-owner Ed, looks like he’s enjoying all the attention and there was a great deal of interest in his charming and beautifully outfitted yacht indeed. 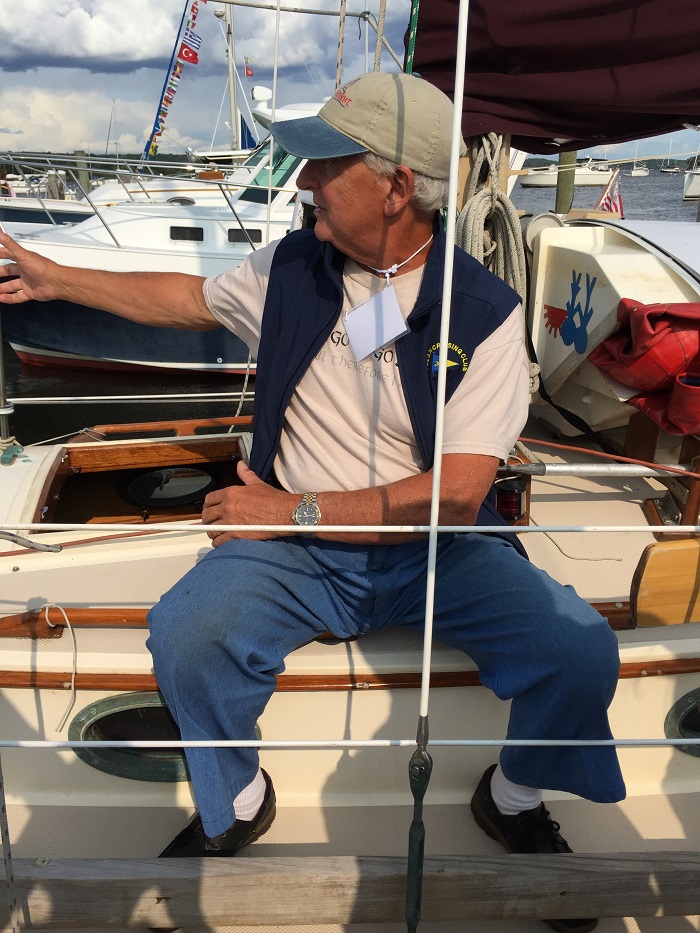 As has been the case for several years now, weather router Chris Parker made the trip up from FL, presenting on both Saturday and Sunday.  He was, as always, a great speaker, making the complex topic of weather understandable with careful explanations.  I particularly liked his presentation, “how to think like a weather router” and was glad to have him with us again. 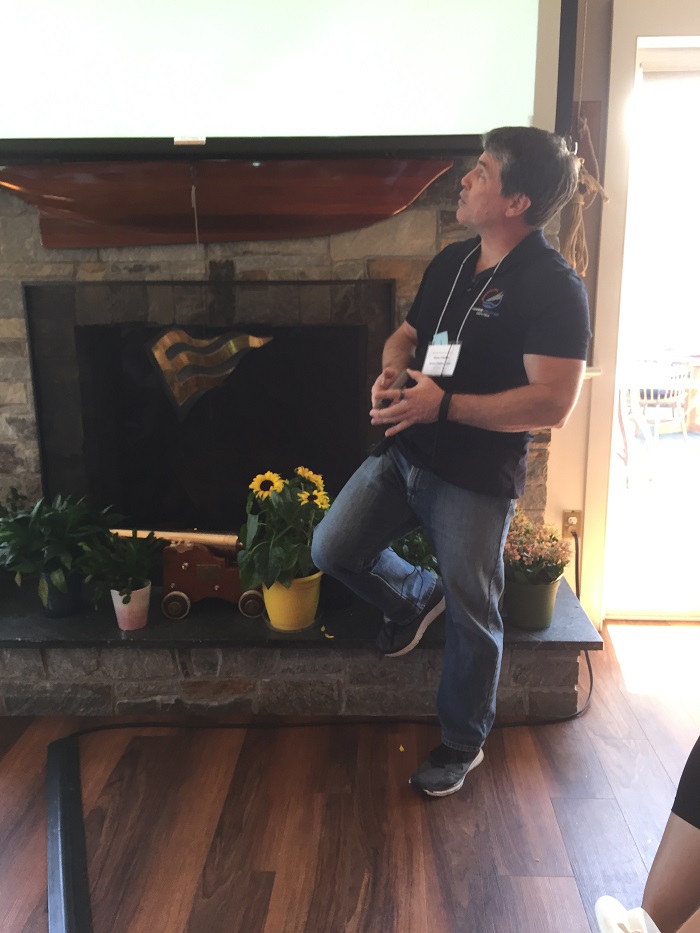 And when I say “with us” that’s also because he stayed at our home and did his Monday morning broadcast from my home office.  After hearing him on the radio so many times over the years,  I was tickled to have him stay with us again.  And, I “ain’t lyin”, as there’s proof, a photo of me and Brenda on our wedding day up on the shelf to prove that he was there. 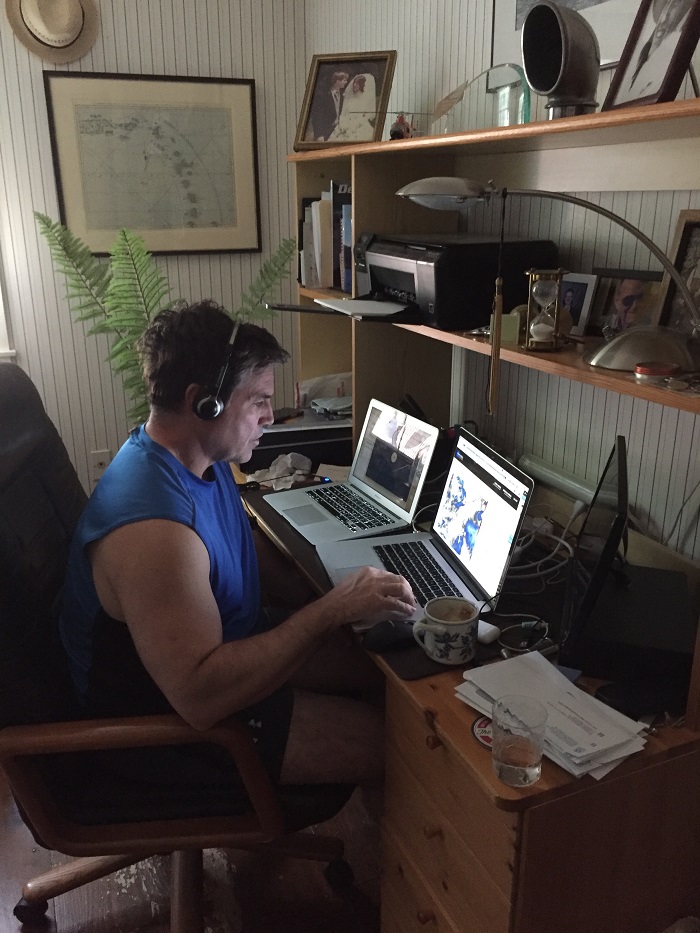 We were also thrilled to have the USCG with us including a helicopter rescue pilot Lt, Kate Dacimo, who shared some fascinating stories of rescues that she has participated in. 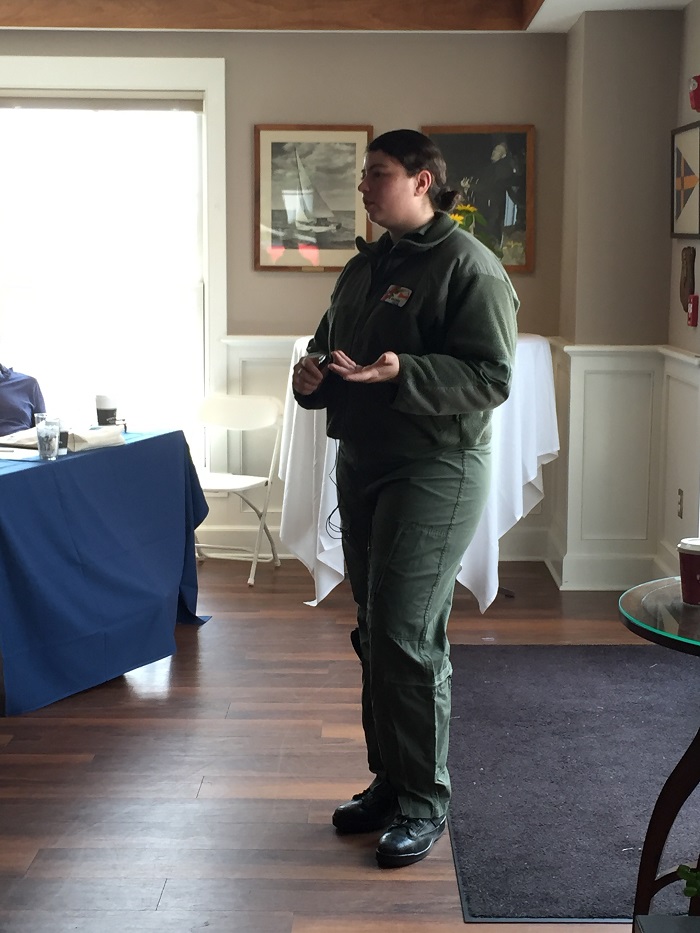 We were also treated to a visit by a 29′ rescue boat and crew that offered tours.    They seemed much less anxious about us boarding them than we are about them greeting us with “permission to come aboard”.   And, we learned that they NEVER take off their boots. 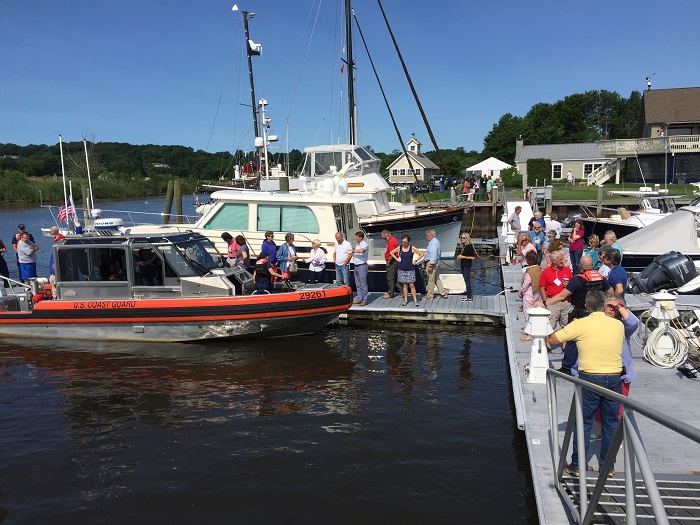 It was great to hear about their experiences, first hand. 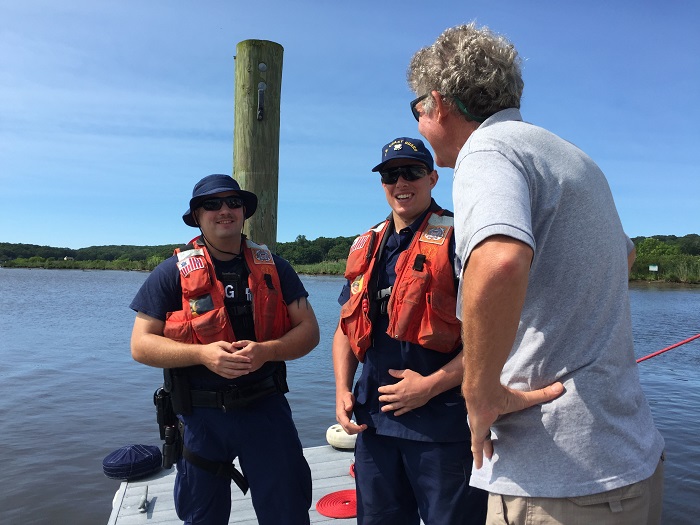 I wonder how often the have to break out the gun that goes on that stand in the bow. 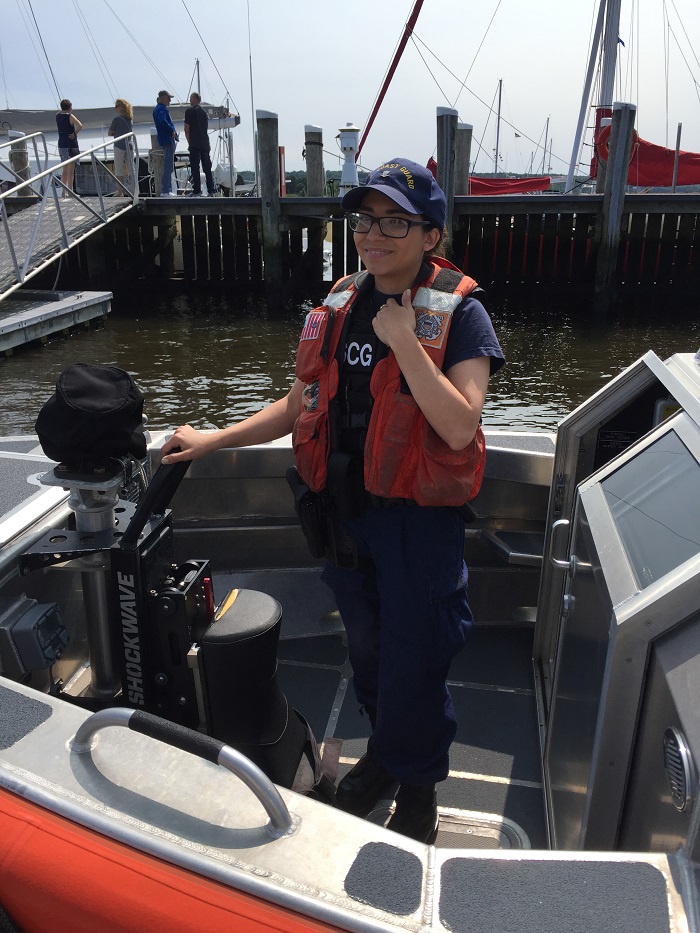 We had plenty of sessions over the two days, and I won’t try to recap them all but there was lots of give and take with “experts” from the audience sharing their years of knowledge. 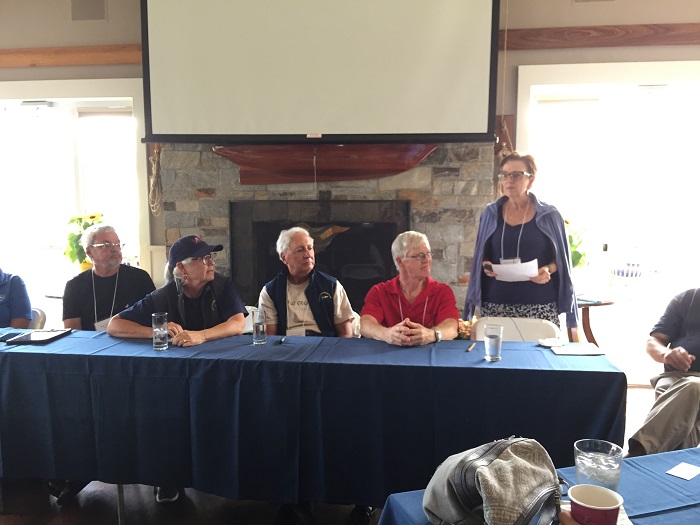 We were even treated to a live Winslow life-raft deployment demo.  One of the boats at our event came complete with their growing family who willingly volunteered to be “rescued”.  It was so much fun to watch the three of them pull the cord and “pop” the raft on the lawn.   Love the shades. 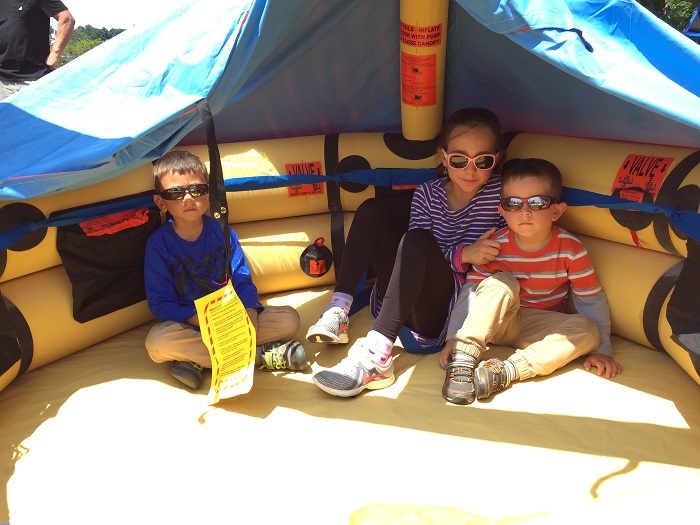 While all three sponsoring associations were well represented, OCC wins the prize with the largest burgee.  I had to stand on our deck for Brenda to properly photograph it.   Yesterday I put it in the mail to it’s next stop, the OCC New England Cruise.  As of the end of the season, the “great flag” will have been on display at nearly a dozen events with Essex just number two on the list. 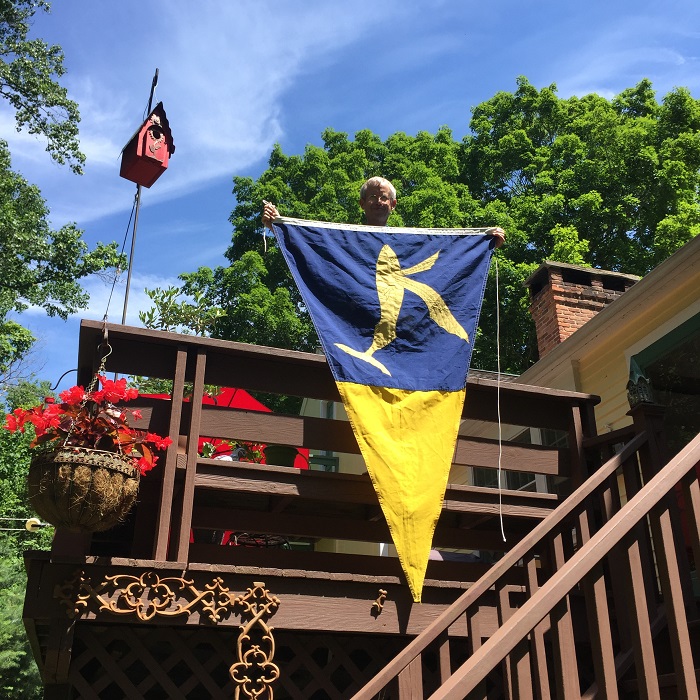 All and all, the weekend was a terrific success and I now find myself wondering what to do about next year as George and I are pretty pooped and don’t think that we really want to do the whole thing over again, all by ourselves.  Wana run an event?  We’ll tell you how it’s done.

In past years, I only gave myself one week or so after the event before I started to look for speakers for the next year.   Not this time.  I’m going to focus on getting Pandora completed and ready to cruise.

Unfortunately, due to the endless delays from the canvas guy who is supposed to be renewing the headliner, I was not able to put Pandora on display at the event and it pained me to have so many at the meeting ask where she was.   With all the delays, it was only last week that she finally splashed, sans headliner and far from complete.

My friend Gerry, when hearing about my travails, made this observation,  “…it appears the “Layup from Hell” may be ending soon, I feel your pain.”

So, there you have it, one more installment of me working hard to “pay it forward” and now that Pandora is back in the water I can focus on paying the bills.

Yesterday the canvas guy finally showed up to begin the install.   Wish me luck, I’ll need it.

Maine beckons and none too soon.

One response to “Paying it forward and the layup from Hell…”