On our way again, finally. All’s well after Sandy.

It’s Tuesday morning and the winds have finally died down enough for us to continue south.  After a few days anchored in an oxbow just off of the Waccamaw river we decided to venture further south but after a few hours of enjoying the continued strong winds buffeting us (not!) we decided to pull into another protected area.  So, for the last few days we have been holed up in a little creek deep into an old rice plantation.  Even though there wasn’t much breaking the wind, that was taller than high grass, there wasn’t much wind and even fewer signs of civilization.  It was very pretty and cozy and given the still brisk NW winds, there was not a sign of mosquitoes.  Having said that, there were massive flocks of swallows which certainly suggest that mosquitoes are abundant when they are not being blown away.

Today we decided to move, picked up the anchor and were back on the river shortly after 07:30.  It was really cold, the most frigged yet with the thermometer in the cabin registering a frosty 52 degrees.  It was still breezy with about 15kts on the nose most of the day.  As is usually the case with NW winds, it was also plenty gusty.

Our destination was to be Charleston for tonight but we couldn’t make enough distance in time to make the last opening of the swing bridge a few miles short of our destination.   The bridge doesn’t open between 4-6pm on account of rush hour.  With the short days this time of year that’s a problem for us as going into Charleston in the dark is a non starter for the crew of Pandora.

A few days ago, prior to moving into our latest anchorage, we were treated to a visit by a friend’s aunt, the amazing 88 year old June that I mentioned in an earlier post for a day of sightseeing at a local botanical/sculpture garden.   If you are following Brenda’s blog you have already heard about our day with June so I won’t belabor it here.  Having said that, I will include some photos as the place was just stunning.  I understand that this place, Brookgreen Gardens, has the largest collection of american sculpture anywhere in the world.  Who’d have guessed, here in South Carolina?

This is a nice picture of June and Brenda.  June said that we wore her out and that she was pooped after our time together.  If she was tired while we were touring the garden she didn’t let on. 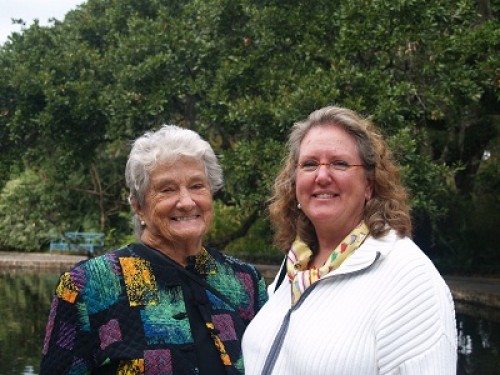 The number of sculptures was overwhelming.  I expect that there were thousands of them.  Some large and some small. 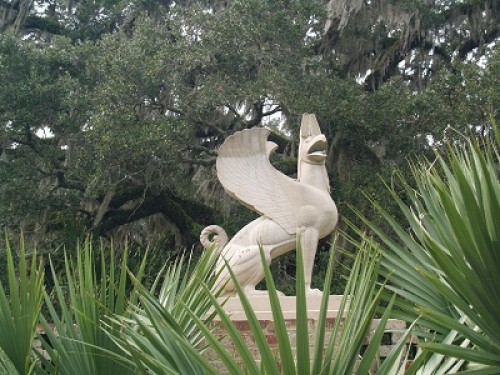 One theme that carried across the collection was the human form and there were plenty to choose from.  Yes, good form from my perspective. 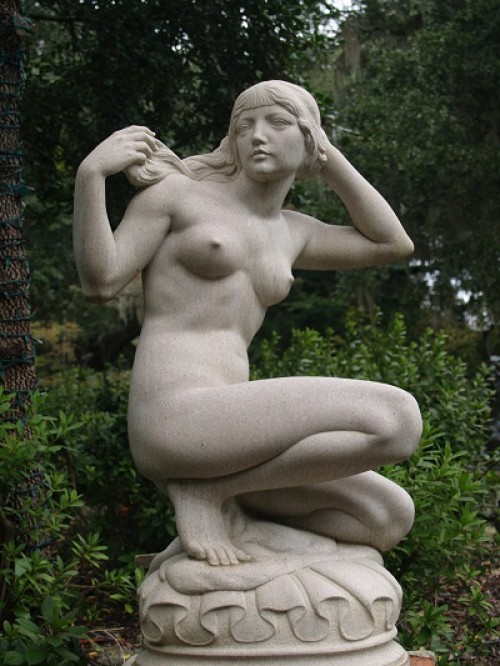 The sculptures were set into the landscape and what a great landscape it was.  Live oaks everywhere. 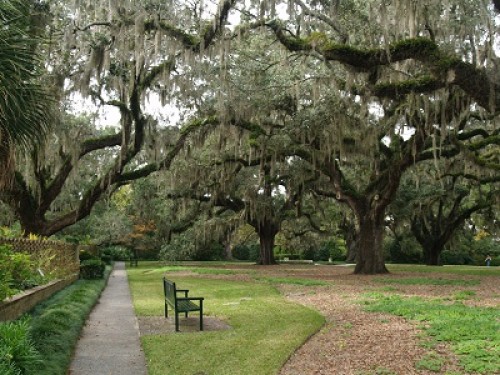 Some views were grand and some more intimate. 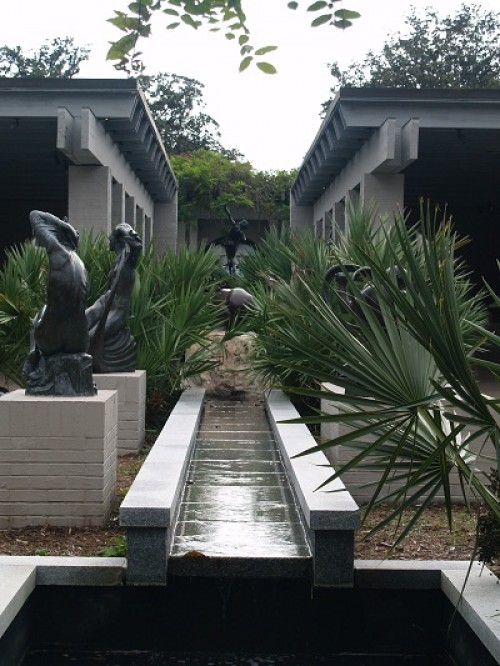 Plenty of water features.  I was told that there were some resident alligators but all we saw was a big snake, perhaps 4-5′ long coiled up above us at one point in an arbor just over our head.  Brenda loved it.  Not!!! 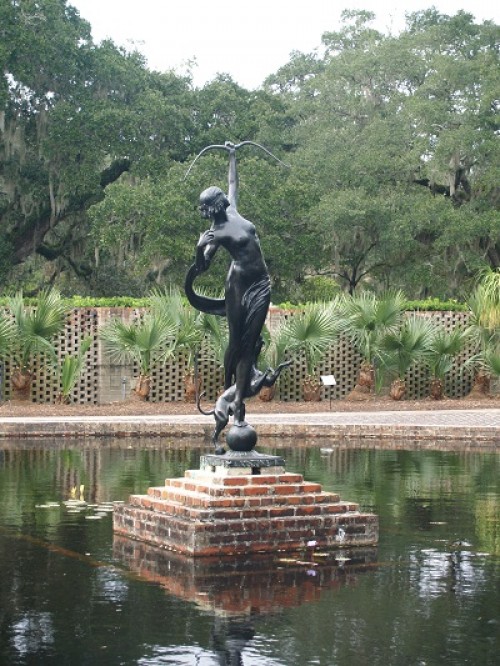 There were even some late season magnolias still in bloom.  These fragrant flowers are amazing.  This one was at least 6″ across. 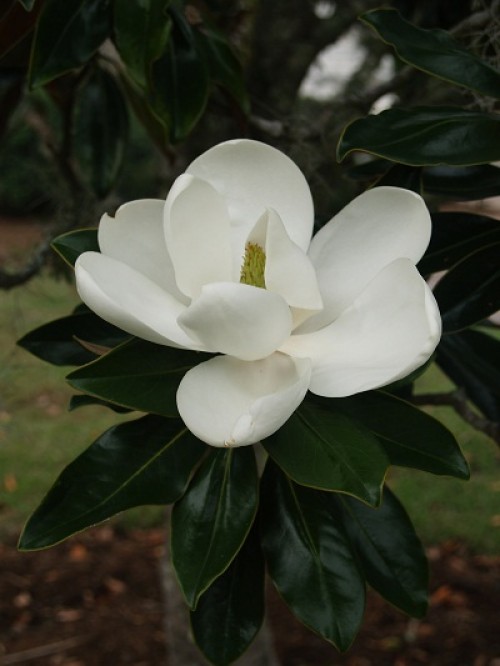 After our visit to the gardens our hostess, who I should also add bought us lunch, took us for a visit to a beach that was just teeming with wildlife.  There were hundreds of birds, some quite large.  These birds, wood storks, have a wingspan of some 5′.   They seemed completely unperturbed by our presence.   When they fly their wings are black and it’s an impressive sight.   They are the largest shorebirds that live in South Carolina and are listed as endangered.  Well, there are plenty of them here.  However, we didn’t see any elsewhere on our trip so far. 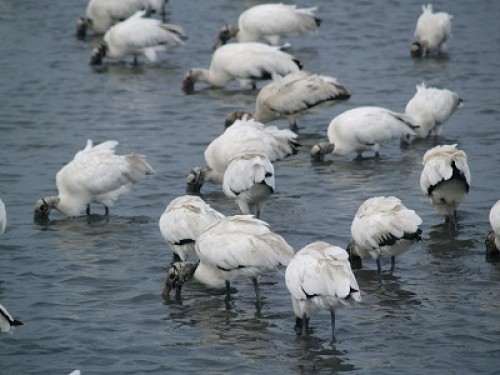 They look a lot different, and more graceful, when they are flying. 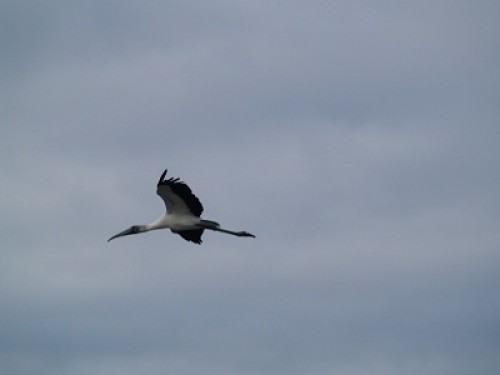 After driving us around town June took us back to her home.  We would have loved to stay a while for a drink on the back deck but I was concerned about Pandora on the ho0k in so much wind so we headed back.  What a lovely view.  There is a massive live oak growing out of the middle of her back deck.  It’s so scenic. 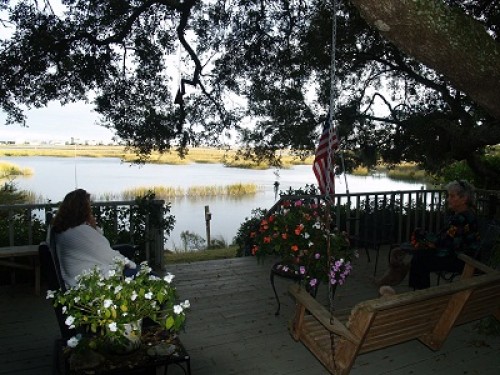 June told us that she had gotten rid of her outboard powered John Boat that she used to go out in, but she still used her kayaks regularly.  She boasted that when her son takes away her driving license that she will just have to get around by kayak.   What a hoot.

As I mentioned, for the last few nights we were anchored in a really remote area, although it did have great cell reception.    It was so narrow that we would surely have run aground when the wind shifted if it weren’t for the current keeping us in the center of the channel.  The view of the grasses and cypress was primeval.  I did look around for alligators but didn’t find any.  Hmm…   Not a bad looking  boat, that Pandora in the evening glow. 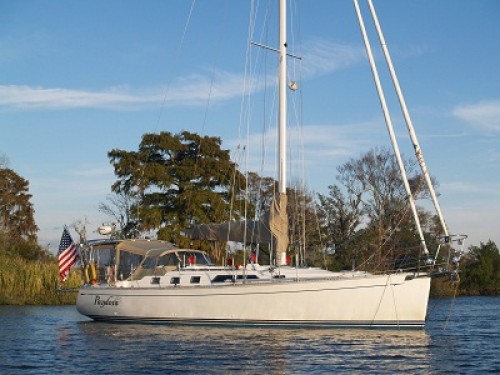 It’s amazing how different things look depending on the time of the day.  The three next shots were taken within about 30 minutes.  They are not exactly the same place but pretty close.    They are the same general view of Pandora above.  Of course, the sunset is in the opposite direction.  It’s all about the lighting  it would seem. 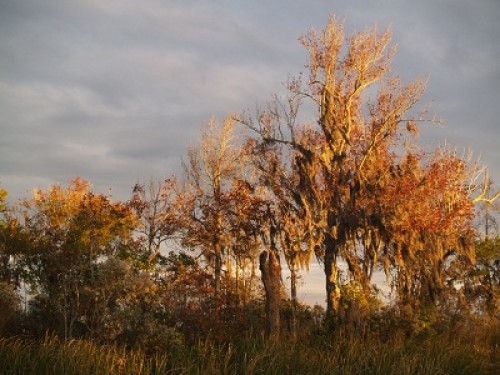 A bit later as the sun set lower in the sky. 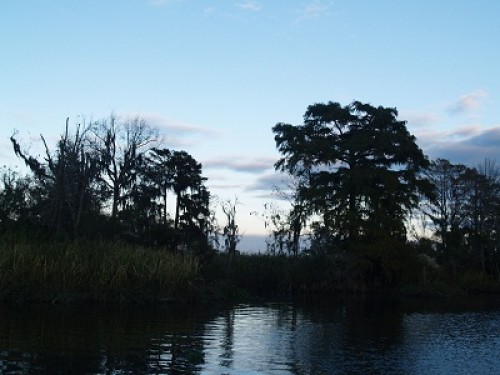 And, finally, the setting sun. 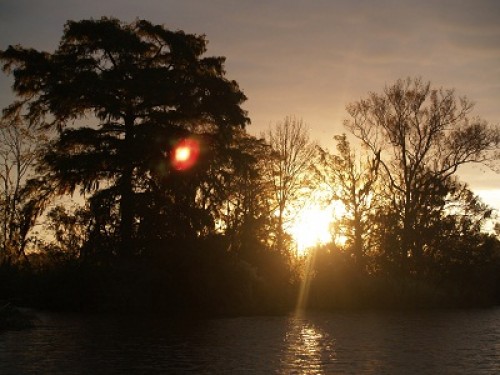 Today shortly after we got on our way we passed what I understand is the only ferry on the entire ICW.  And, it’s not much of a ferry at that.  This is such a remote area that you can go for miles without seeing a house or a bridge.  I guess that there aren’t enough folks living here to warrant a bridge of their own. 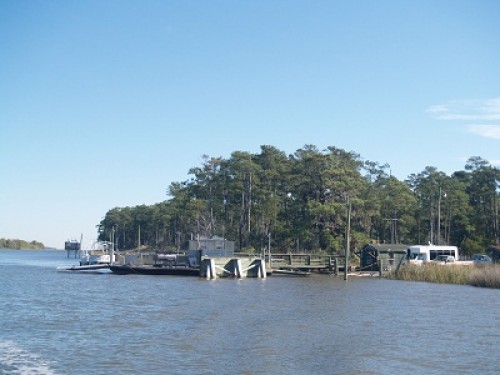 I am not sure what this is.  It’s clearly a lookout of some sort.  However to look at what as it’s just flat marsh in every direction?  Judging by the look of this they have been on the lookout for something for some time.   Too busy looking and not enough time spent painting, it would seem.  I SEE YOU!!!  of should I say THEY SEE YOU!!!  Me?  I see that they need to spend some time on cosmetics. 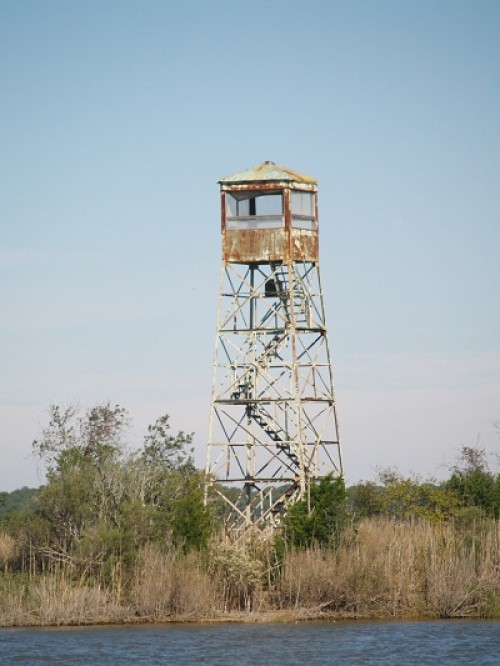 Perhaps I will close with this picture of a bouquet of water hyacinth that I picked  for Brenda yesterday.  They are pretty small as Brenda has arranged them in a shot glass.  “Hey Buster, that’s a pretty puny excuse for a bouquet!”  Yes, perhaps, but what girl isn’t impressed when a boy/guy brings her flowers?   Small or not…  Besides, as I reached into the swamp grass to pick these I imagined an alligator rising up out of the black water to snatch my hand. Well, that’s what I told Brenda.  She was impressed.  And, that’s my story and I am sticking to it. 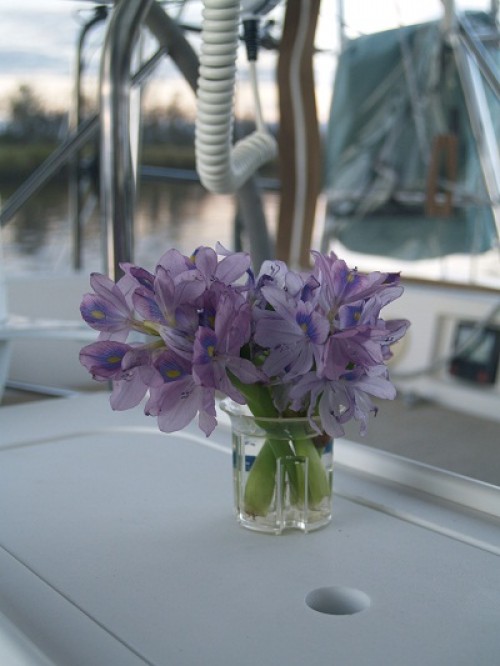 Well, it’s opening time so I am going to soon reach for an adult beverage so we can enjoy the sunset.  Tomorrow, on to Charleston for a week.  I am excited.

One response to “On our way again, finally. All’s well after Sandy.”