For the last two days we have been staying in Mendocino, on the coast, with our son Christoper and his girlfriend Melody.   This is the view that greeted us this morning from the kitchen. 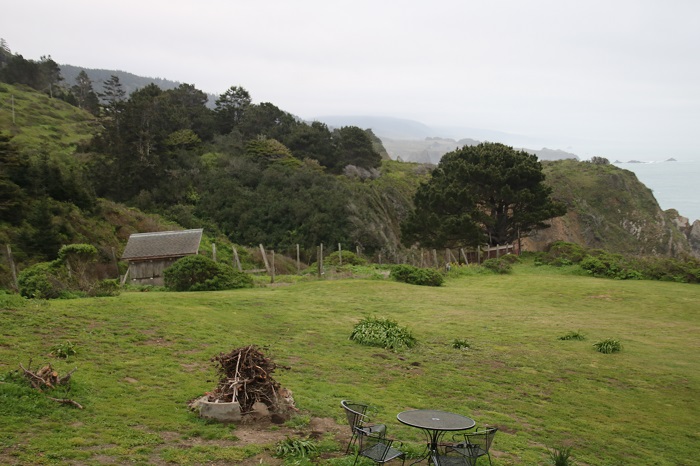 It’s been a real treat to spend a week with them, here and near their home in Oakland.  They live in a lovely little studio apartment with their dog Mila.  It’s way to small for us to stay with them, so off to an Air B&B for us.  It’s an expensive area so I won’t comment on where we’ve been staying. Let’s just say that today’s view, well, it’s better.

So, here we are, and it’s great.  Chris and Melody set this up and are treating us to a stay with them high on a cliff overlooking the ocean.  The place, and you can’t see another building from here, is located on 85 acres.   Its  a compound or tiny village with an eclectic mix of buildings. 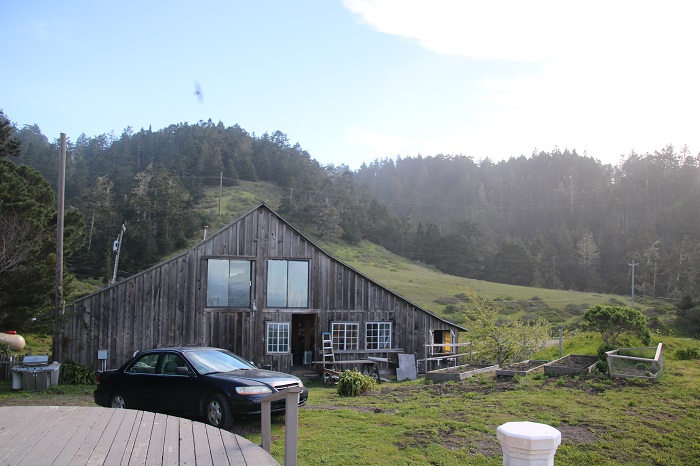 There’s even a root cellar, or is it a Hobbit House? 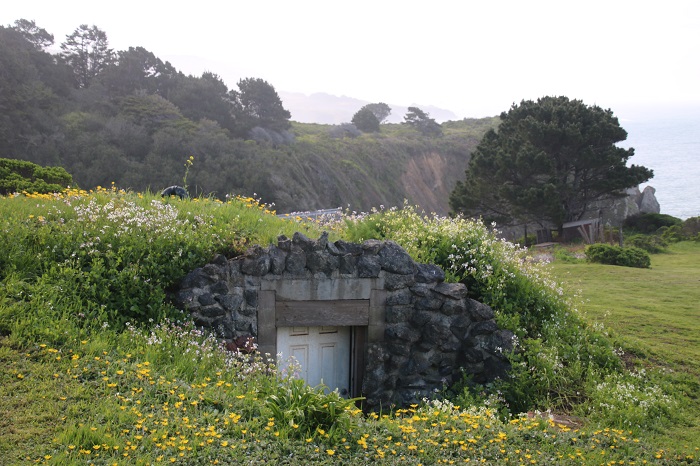 The view from the deck on the main house, where we are staying, is pretty spectacular. 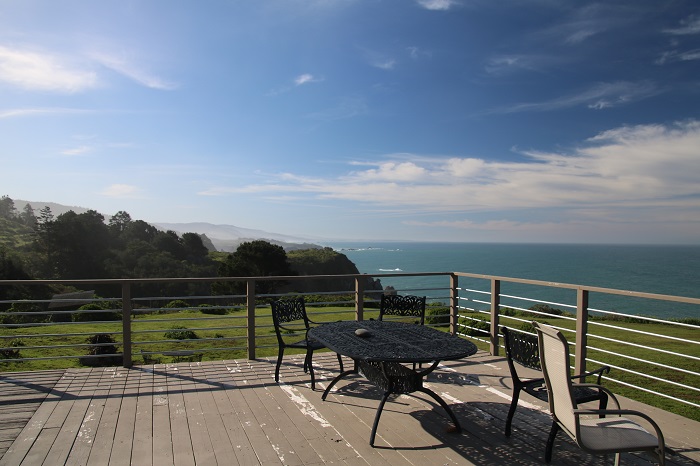 From the northern part of the property you get a pretty good feel for the scale of the place.  You can barely see the main house peaking out from the trees on the left. 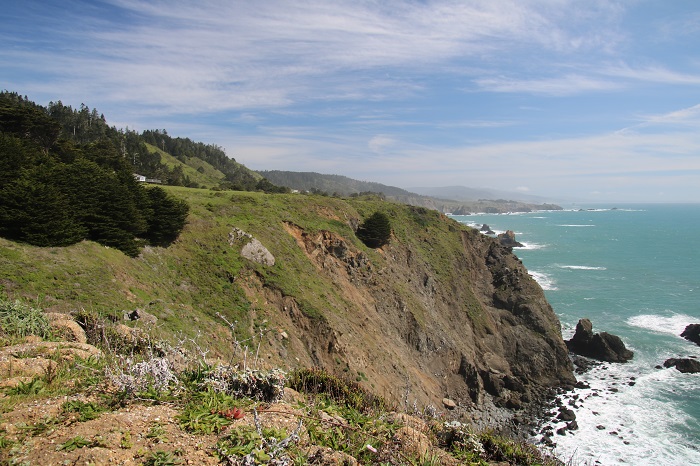 These trees to the left on the above photo look like they have had to work hard to grow here.  Craggy and I expect very old. 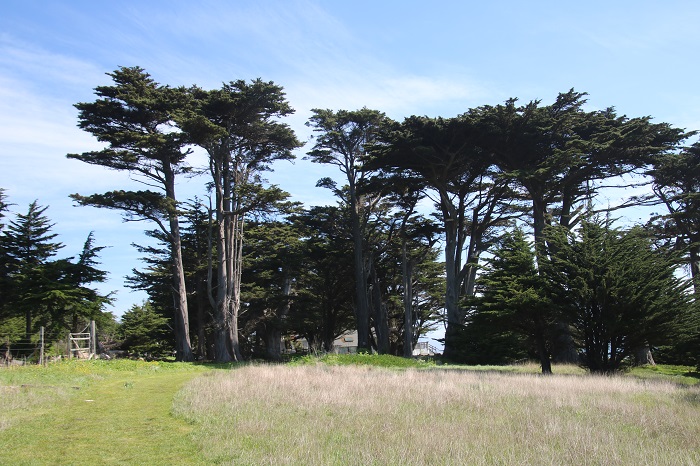 Out on the point, near the edge of the cliff, there are some wonderful spring flowers.   These low lying fleshy plants grow everywhere. 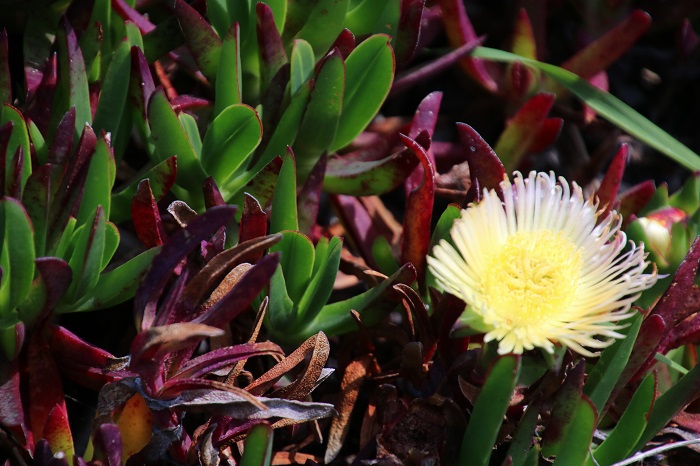 Love the dwarf iris, not more than 6″ tall. 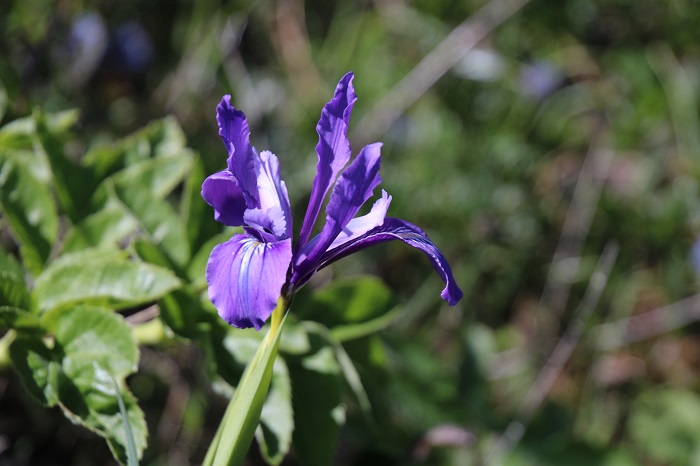 Near the northern property line, is a government survey mark placed here in 1930.  It says that to disturb or remove it will subject me to a fine of $250 and imprisonment.   $250 sounds like a pretty good deal for what would be a very nice souvenir.  I wonder if they would calculate inflation from 1930 into account if I take it?   Not sure about the “imprisonment” part.   On second thought, I’ll leave it. 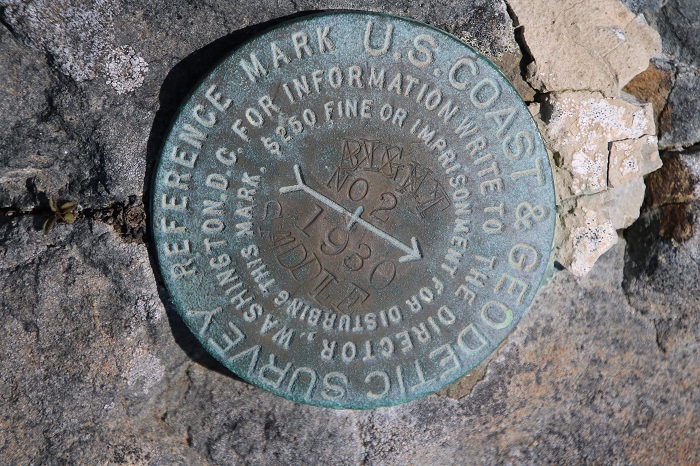 Anyway, back to the flowers.  I have no idea what this is but it is impressive with a flower stalk that is over 4′ tall. 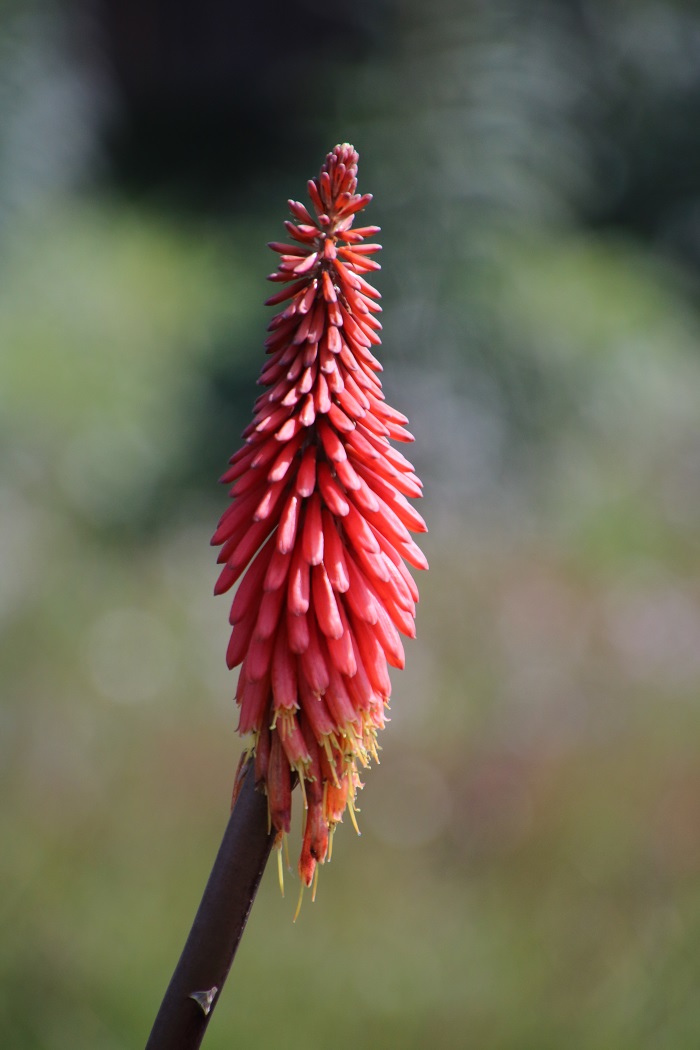 These clusters are on a bush along with dozens more make for quite a show. 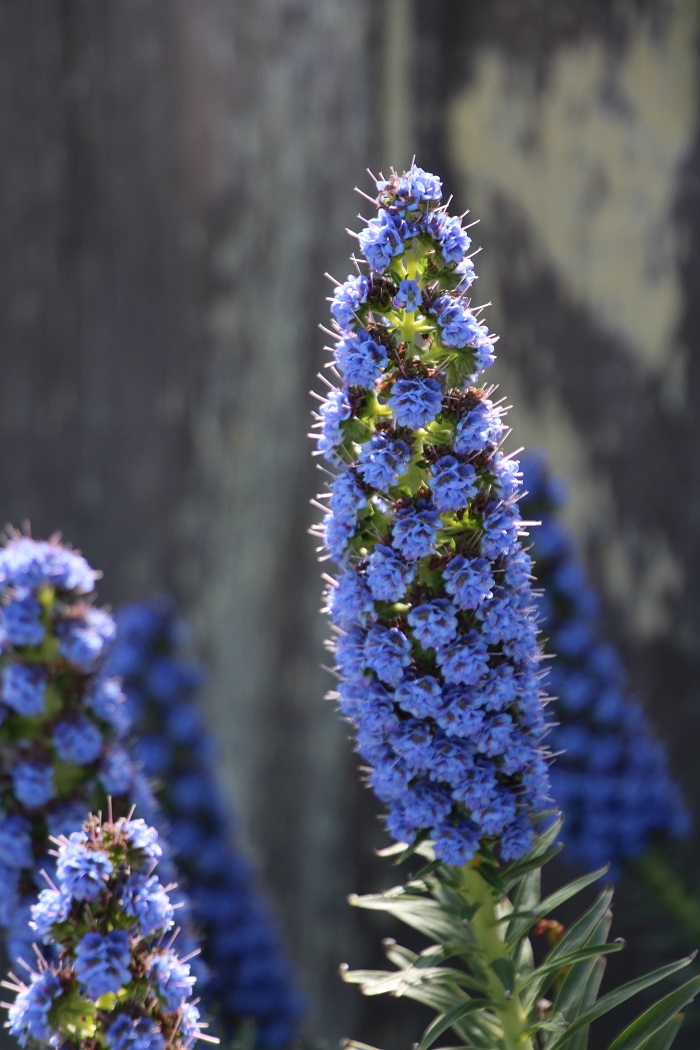 For lunch yesterday we stopped at a tiny deli in nearby Elk, population 250.  There was a lovely picnic area across the street, overlooking a beach. 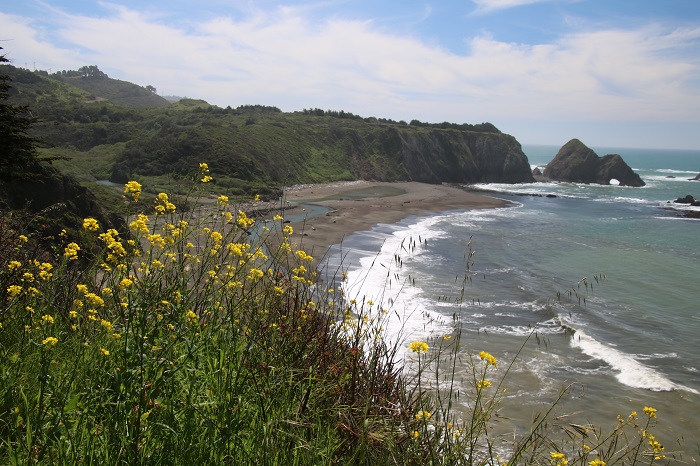 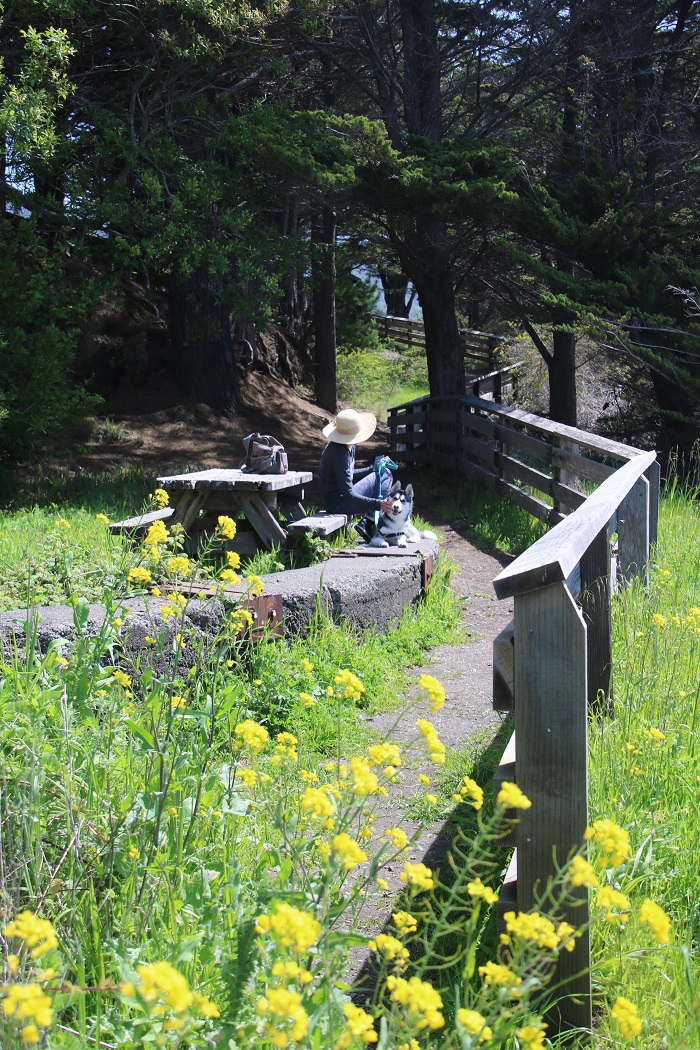 The Pacific coastline is remarkably rugged, with many miles between ports.  By the mid 1800s, this area was a major source of lumber, shipped all over the world and a major source for the wood used to rebuild San Francisco following the devastating earthquake of 1906.  This photo does suggest that they needed a lot of lumber. 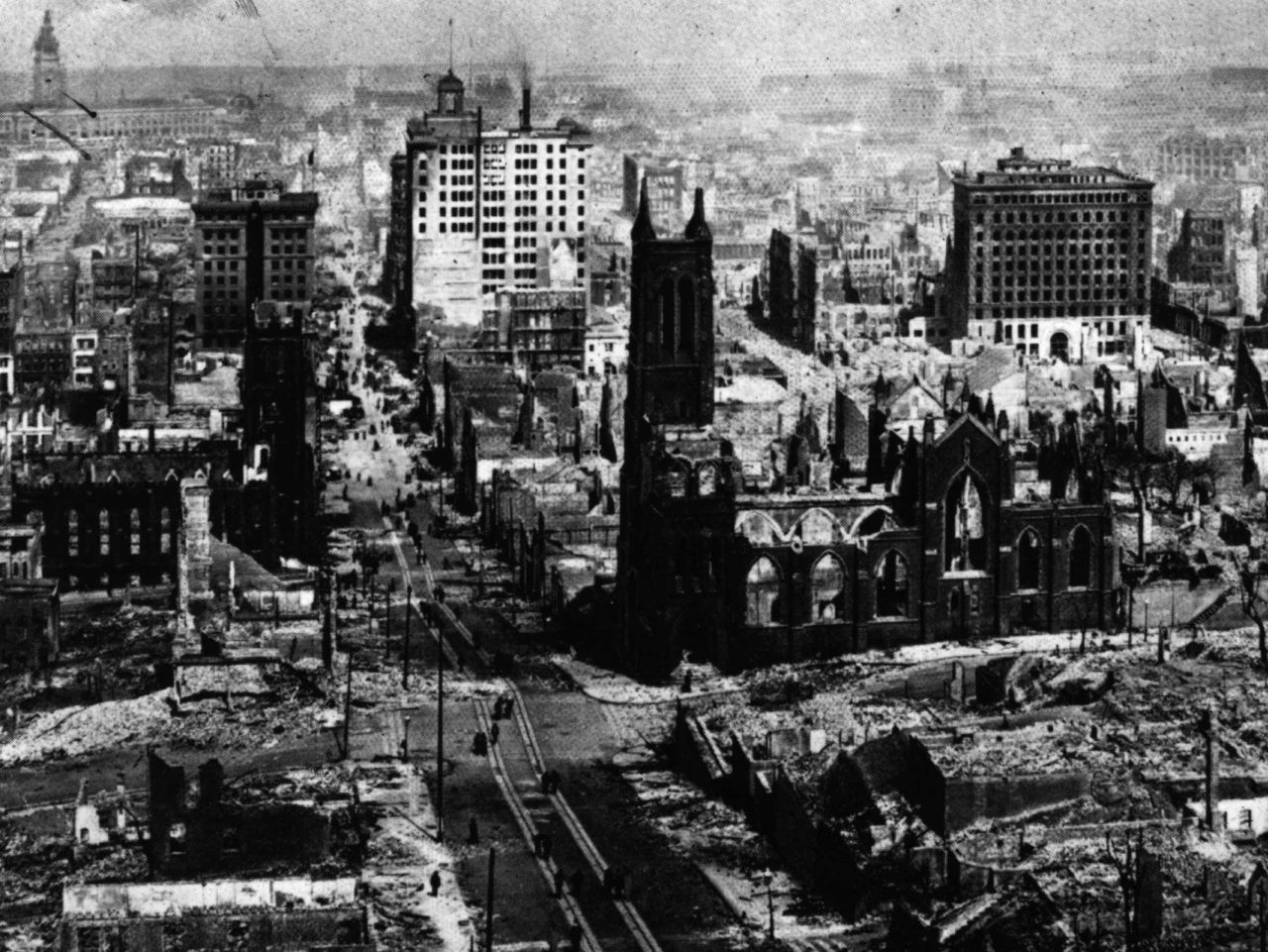 Lumber schooners, mostly with two to three masts and easily maneuvered, were able to pull into just about any spot in the coastline that offered even a small amount of protection from the ocean swells.  These harbors, such as they were, were known as “Dog-Hole Ports“, so named by the captains that used them because they were just large enough for a dog to get in and out of.  There were some 400 sawmills along the northern California coastline serving these tiny ports.    It’s hard to imagine bringing a ship near a rocky coastline like this, but they did.

This photo, BTW, was taken from the deck where we are staying.   Amazing. 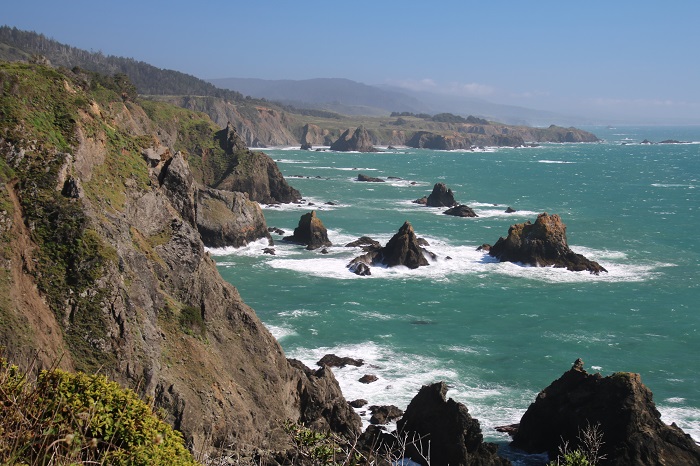 As close as we are to SF, about 3 hours by car, this areas once felt a lot more remote when it was only accessible by boat or stagecoach.  In many ways, it still feels far away and very primitive.  Well, primitive perhaps but with some really nice places to eat out and don’t forget about those wonderful wineries that are so close.

Yesterday evening we visited the nearby town of Mendocino for dinner.   Before dinner we had drinks at a beautiful old inn from the late 1800s.  I expect that our bar tab would have put us all up for a month, meals included, in the olden days.  I also expect that the crowd would have been a bit rougher.    “Hey you, yeah you dog face, get me another whisky and make it right quick or I’ll blow yer frigging head off!   On second thought, a chardonnay if it’s not too much trouble.”

The trip here from San Francisco takes you through the major wine regions and finally winds through the redwood forest just north of the Anderson Valley, our favorite, and one area that Brenda and I have been visiting for over 30 years.  It was a bit surreal for us to sit in the back seat on the way here as Chris drove us along those familiar roads.    It wasn’t that long ago, well it doesn’t seem that long ago, since Brenda and I were in the area while Chris and his brother Rob were toddlers, home with their grandparents.

Melody and Chris just love it here.   About 100 yards from the main house, there is a small deck that overlooks the very edge of the cliff.  The wind off of the ocean is so strong that the chairs on the deck have to be tied with a rope to keep from being blown over the edge of the cliff.  Not the most relaxing place to sit and sip wine.  However, after a glass or so, the risk of falling to certain death somehow seems less of a problem. 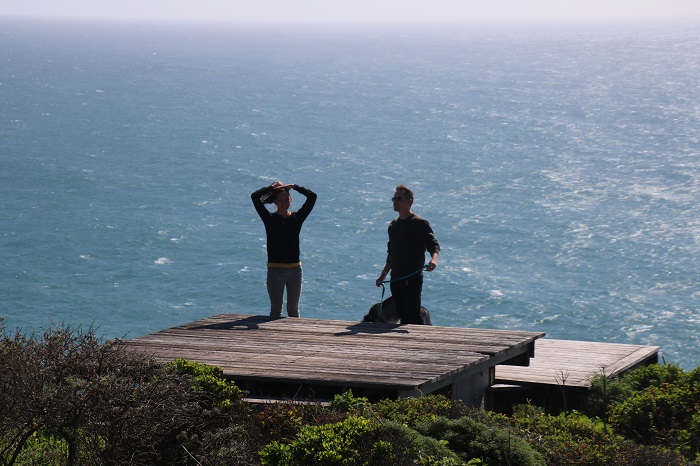 Their dog Mila loves surveying all that she can see.  “Hey mom and dad, I’ll bet that cove is one of those Dog-Hole Ports.  Am I right?” 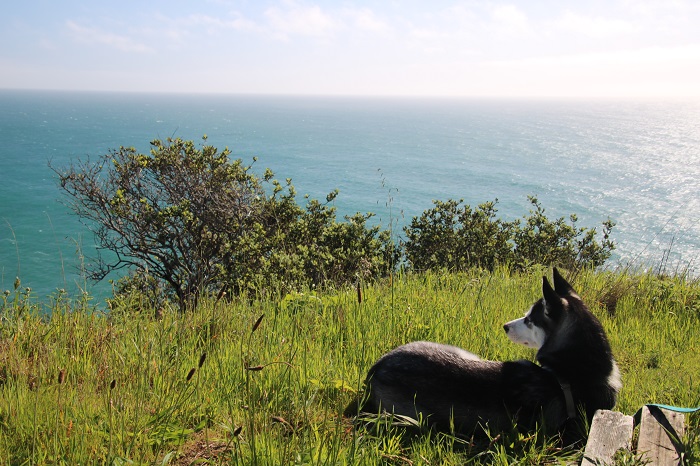 This area is very close too the dense redwood forest of the Navarro valley to the east, one of the areas that were heavily logged.   As the coastline is so rugged, with safe harbors so far apart, transporting the lumber to anchored schooners involved a huge effort.    Some spots, but not many,  were sheltered enough to allow for the construction of a wharf that went far out into the water.   Note the many lines strung from the bow of this steamer, no doubt to hold her off of the wharf in the ocean surge. 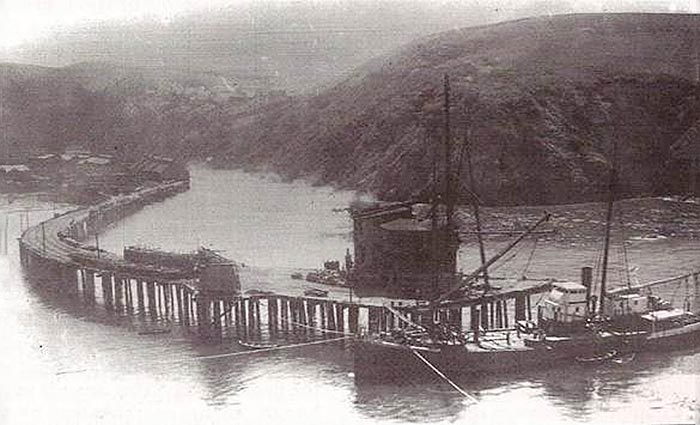 I expect that these structures did not last very long with the relentless pounding of ocean waves.    However, with low cost labor along with cheap and abundant building materials, I doubt that it mattered.

The often precipitous drop off from cliff to the water posed unique challenges in getting lumber down to the ship. 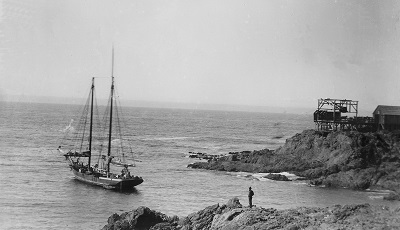 The only way, in those areas, to get materials down from high on the cliffs, was to use long lines strung from the top of the cliff or lumber shoots designed to slide boards down to the waiting schooner far below. 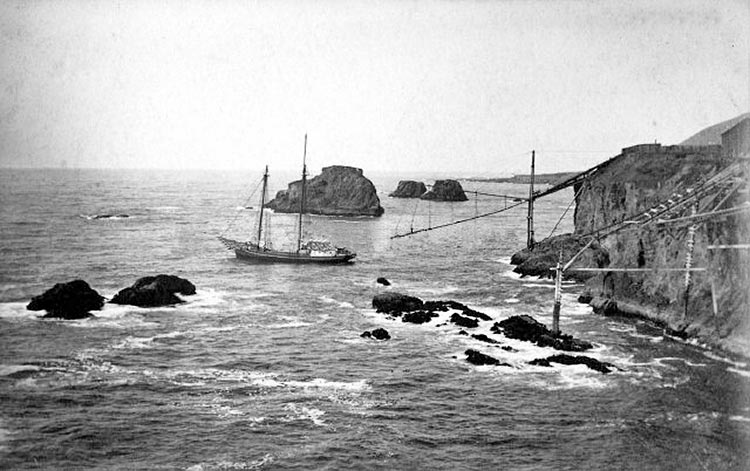 As technology improved, schooners made way for steam powered freighters but creativity was still needed to board freight and passengers.  “Don’t worry little lady, I’ve done this hundreds of times.” 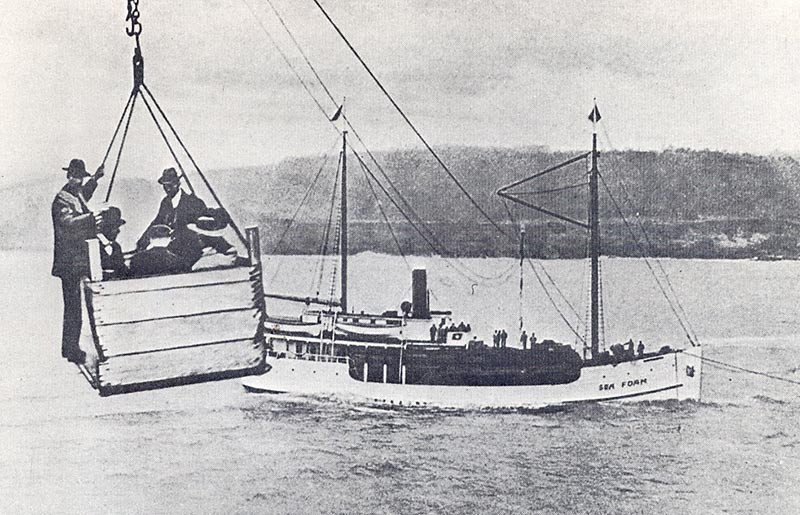 The schooners that served this area had to be very maneuverable in order to safely make their way in and out of the tiny harbors along this exposed coastline.  It was easier to load the ships from high cliffs than to try and transport lumber any distance over rough dirt roads to better harbors.

The last remaining lumber schooner from that era is the C.A. Thayer, launched in 1895 in Eureka CA, not far from here.  She is now preserved at the San Francisco Maritime museum. 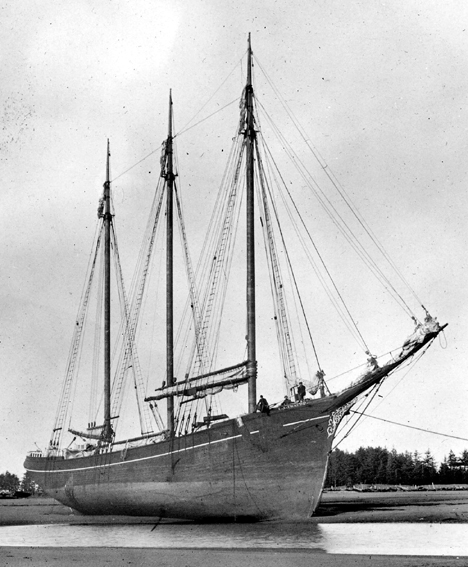 Over the years, she, along with a number of other vessels in the museums large collection, fell into an unfortunate state of disrepair but recently she has been fully restored.

We visited her in 2017, on our last trip to SF, as they were just finishing the restoration and enjoyed a tour.   She’s in great shape now. 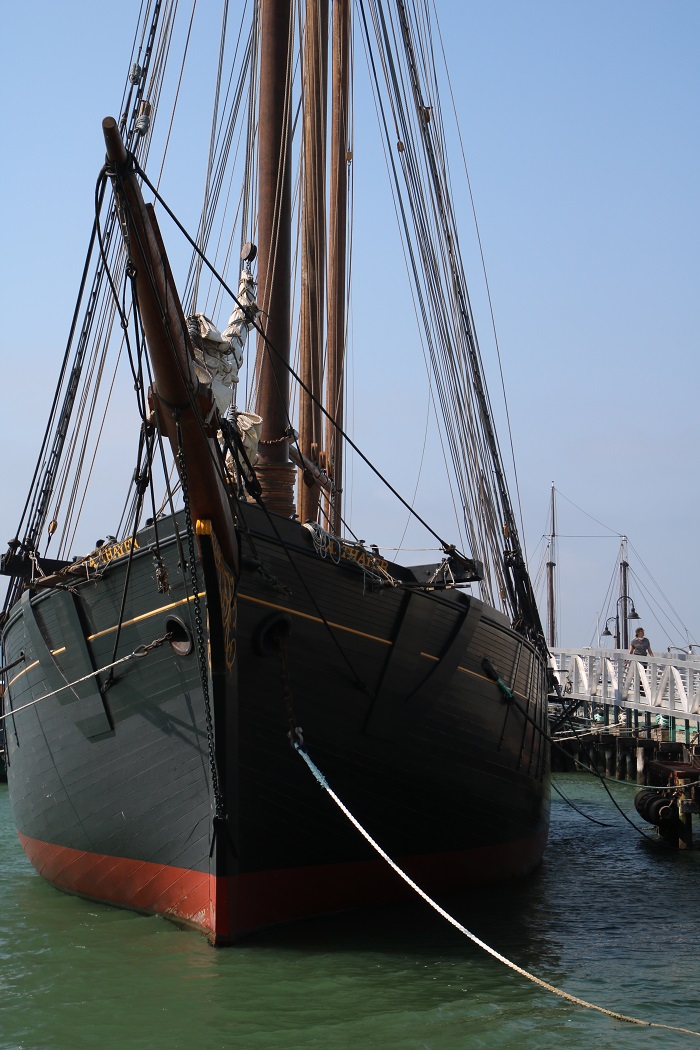 Her stern was designed with openings that allowed the loading of long pieces of lumber below decks. 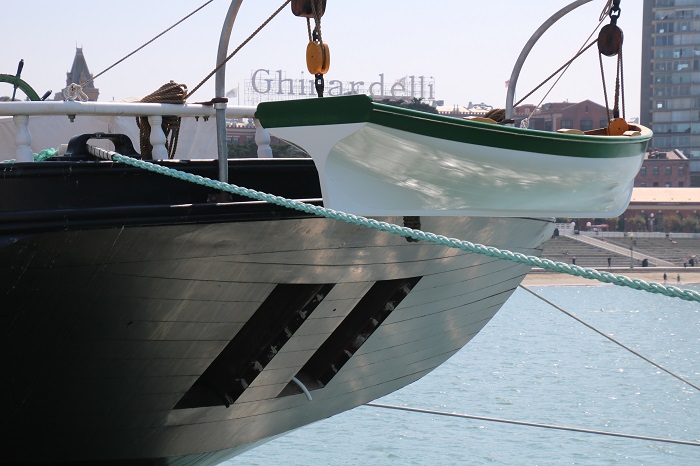 In order to fit the maximum amount of cargo, she was designed with no bulkheads below decks. 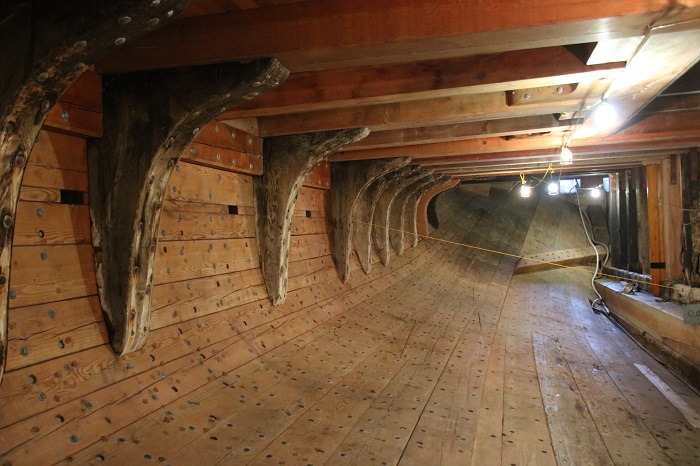 There were once hundreds of these schooners moving lumber down the coast to San Francisco but she is now the last remaining one and it was nice to see her restored to better than new condition.

So, here we are, in an area with so much history and along with is us Mila, who must particularly appreciate the history behind these out of the way, “Dog-Hole ports” that played such an important part of area history.

One response to “Dog-hole ports and the Pacific Coast lumber trade.”