Fisher’s Island marks the eastern end of Long Island Sound and while it is just a few miles from Stonington CT, it is part of New York State.  Fishers, unlike Block Island, Martha’s Vineyard and Nantucket has been largely privately owned during it’s modern history so it’s development has been very carefully controlled by a small group of very powerful individuals.  If you are lucky enough to visit the best way to get there is on a private boat.  There is a ferry from New London but once you are on the island you are largely on private property.  For our visit, we left Mystic and motored over the few miles as there wasn’t any wind. Our destination was West Harbor which is, incredibly enough, located at the western portion of the island on the north side.  There are moorings for rent in the harbor just south of can #7 behind the reef.  It’s well protected and very pretty.  You can take your dink ashore at the yacht club and go for a walk.  There’s a well stocked market about a half mile up the road if you turn right out of the yacht club lot.   The club is host to a variety of boats from the most humble to this visitor while we were there to this massive yacht.  Clearly, the folks on this island have the means to keep everything just so. 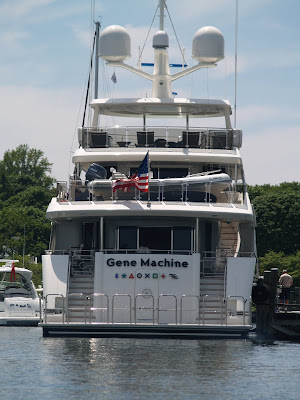 You can charter Gene Machine for your own cruise if you wish. She’s was built by Westport Yachts and is 130 feet long.  I understand that there was a wedding the prior evening at the yacht club so perhaps the wedding party spent the night aboard.  If you like the design there are 30 others similar to her so perhaps you can find one at a location around the world that suites your needs. 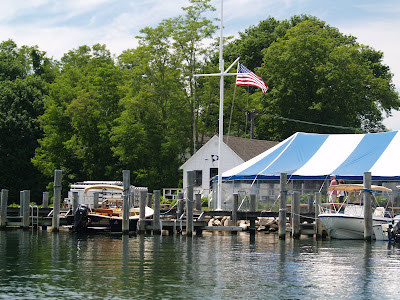 A nice shot of the clubhouse.  It looks like the entire clubhouse and tent would fit aboard Gene Machine.
There isn’t much to do on the island except in the center of “town”, actually a town green and a few shops, is only a short walk from the harbor.  Along the way is a wonderful cooperative garden that’s always a treat to visit. 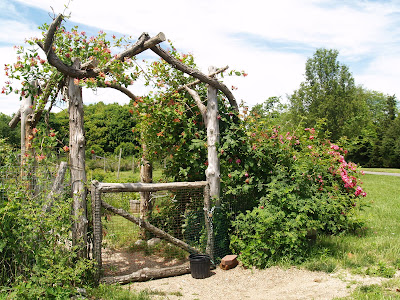 The garden is very well tended and oviously gets a lot of care. 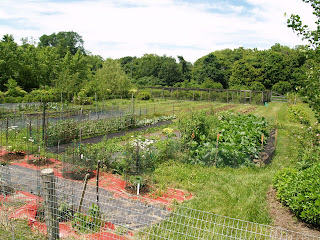 It’s impressive what money will allow when it’s not coupled with a stucco mansion as is sadly so often the case.   As you would expect, there is also a very tasteful graveyard along the way. 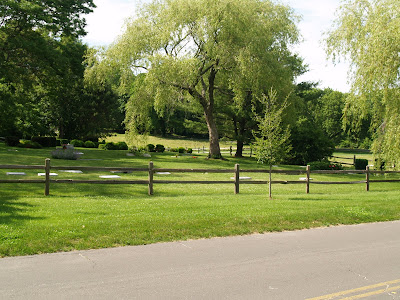 It looks like there’s plenty of space still left so book your spot for your eternal resting spot.
In spite of our many visits to Fisher’s over the years we have never heard of or visited the Henry L. Ferguson Museum,  a wonderfully organized collection of the history of the island.   We were treated to a personal tour by the curator who spent nearly an hour with us showing us around.  He was deservedly proud of his current exhibit that chronicles the early history of the island’s homes,in pictures, both then and now, from first settlement through the early 20s.   There is also a nice newsletter that tells a lot about what’s going on at the museum and on the island.   For such a modest museum, it’s obviously well endowed and the building itself is quite new.   I understand that some involved in the layout of the museum are associated with major institutions on the scale of the Metropolitan in New York City and it shows. 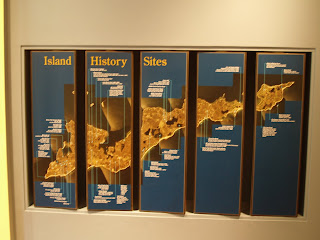 This interactive map rotates to show archaeological sites and other areas of interest on the island. 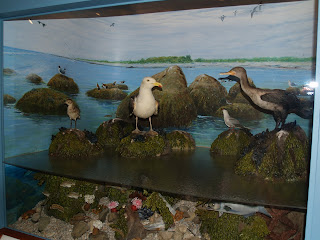 There are some dioramas that are of very high quality, and certainly of a caliber than you would not normally expect in a museum of this scale. 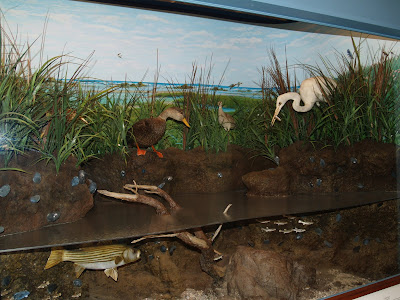 There is also an very nice model of the Race Rock Light, which is located on the south western point of the island.  This light itself has a fascinating history given the technical difficulties in building it.   $3,000 was appropriated by Congress to begin construction of the light back in 1838 but it was not completed until 1878 at a total cost of nearly $280,000.  The piece of water that it marks is particularly dangerous and is the site of countless wrecks.   While it’s possible, I doubt that the lighthouse ever had a $100,000 toilet seat in it.  However, with Congress holding the purse strings, who knows. 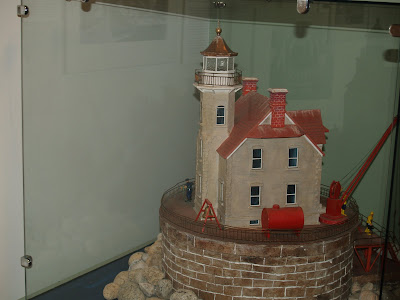 If you are interested in the history of this light, a long and complex one for sure, check this out. 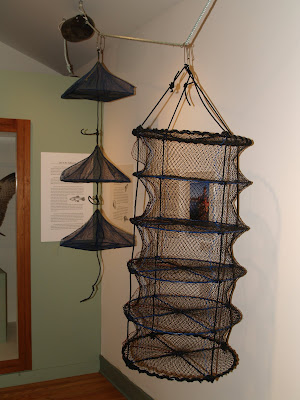 The island, along with an early history of raising livestock, including cattle, sheep and even poultry in large numbers, is currently known for it’s terrific oysters.  This is a shot of cages used to hold growing oysters for commercial sale.  We wouldn’t want our oysters laying on the dirty, muddy bottom would we?  Never!
Speaking of meals, what blog post isn’t better if it’s ended with a shot of a meal aboard.   Here’s Brenda with a wonderful omelet ready to dive in.  Visit Fishers’s, you won’t be disappointed. 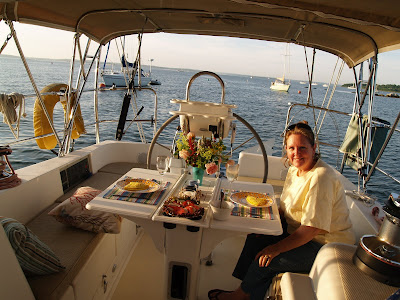 Is it me or is the horizon tilted?  Perhaps it’s the earth listing to port.  Something else to worry about.  Well, at least there are fresh flowers on the table.  I guess that means that everything will work out in the end.  Hmm…
This entry was posted in Uncategorized. Bookmark the permalink.