Waiting for the crocus to come up. A sign. Anything…

Well, it’s been two weeks since I last posted and that’s way too long.  Along with visiting our son and grandchildren, I have been busy building two looms for Brenda, perhaps as penance for keeping her away from home for the last six winters voyaging here there.

It’s just beginning to get light outside and this is the view from my office window.   Not looking too good for an early spring. 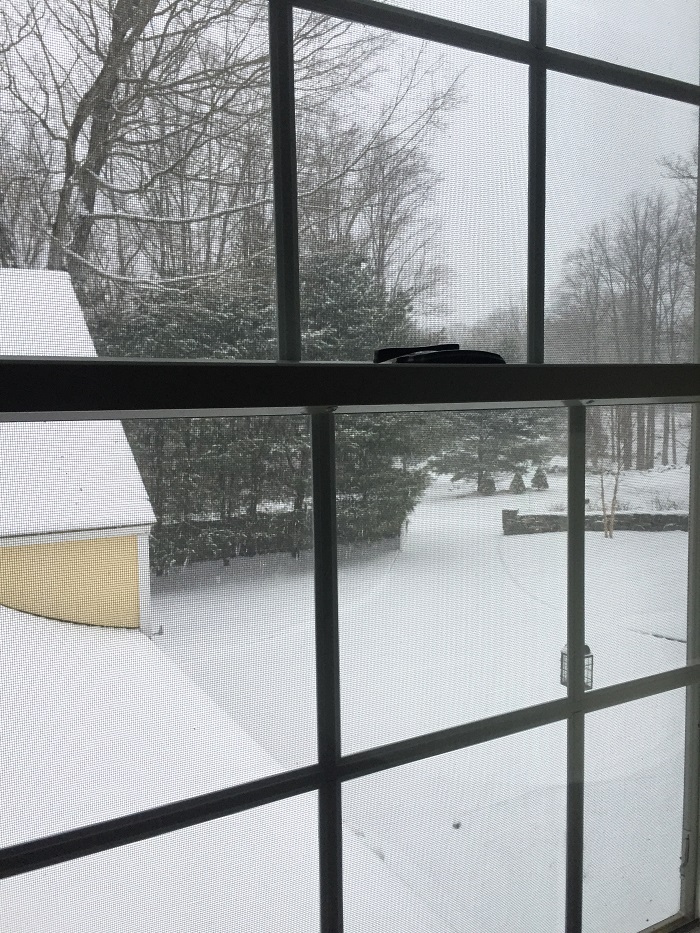 Beautiful yes, in a wintry sort of way.  Me, I prefer this instead.   Soon enough.    It’l get better in May. 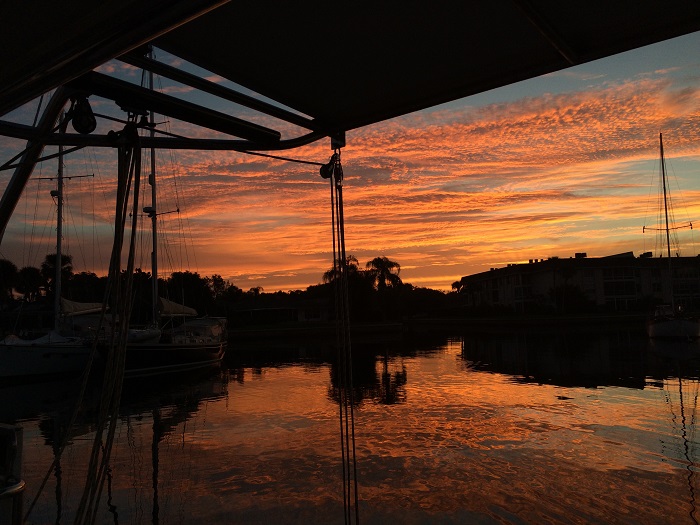 Yes, it’s been tough for me to be here in CT with the sub-freezing weather for months now but at least I have been spending a lot of time in the the shop with no windows so I can’t see outside, the bare trees and… well, you get the picture.  Actually, I already showed you the picture.

Speaking of picture, this is one of the two Takadai looms that I built while hanging out in that windowless shop.   Takawhat! you say.  Check this link to learn more about this obscure fiddly technique.  Trust me, I won’t be ditching Pandora to make ancient Japanese braids any time soon.  However, now Brenda has one of these arcane gizmos of her own… 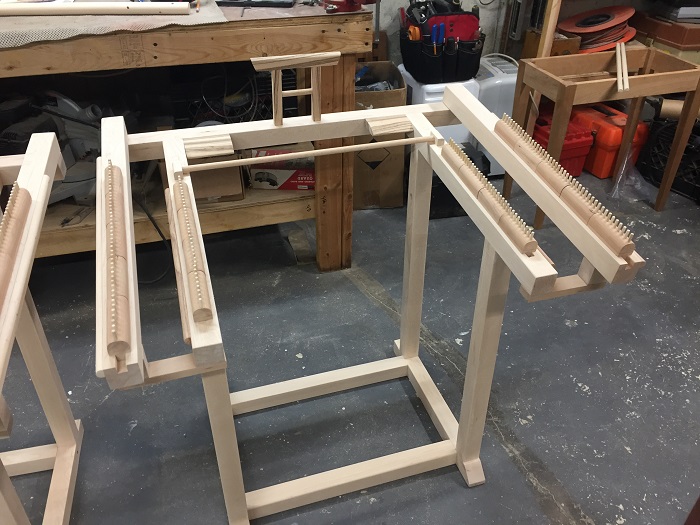 The loom looks deceptively simple, but, trust me, it’s not simple to make at all.   I used some exotic materials including zebra wood.  I have had a single board on hand in the shop for a decade waiting for the right project to come along. 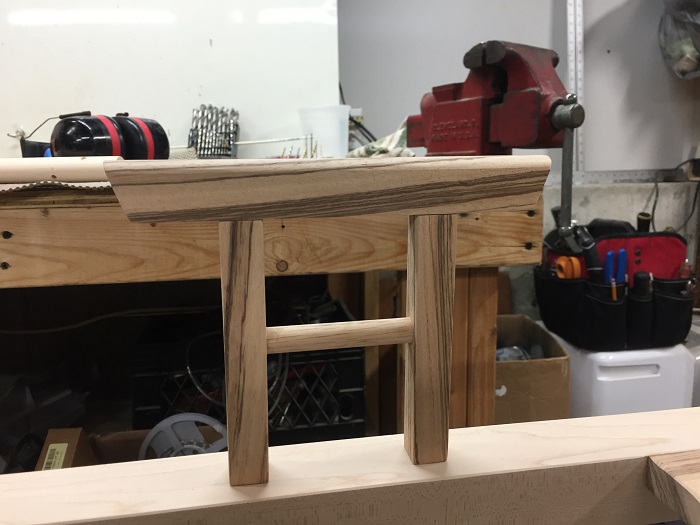 I also had to make 40 of these.  They are called Koma and each one has 9 pins inserted into fiddly little holes.  Yikes, talk about repetitive motion… 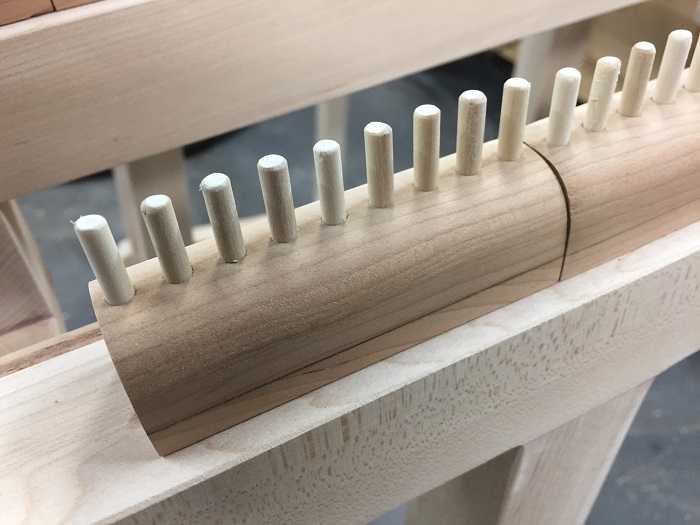 And, there are SO MANY OF THEM. 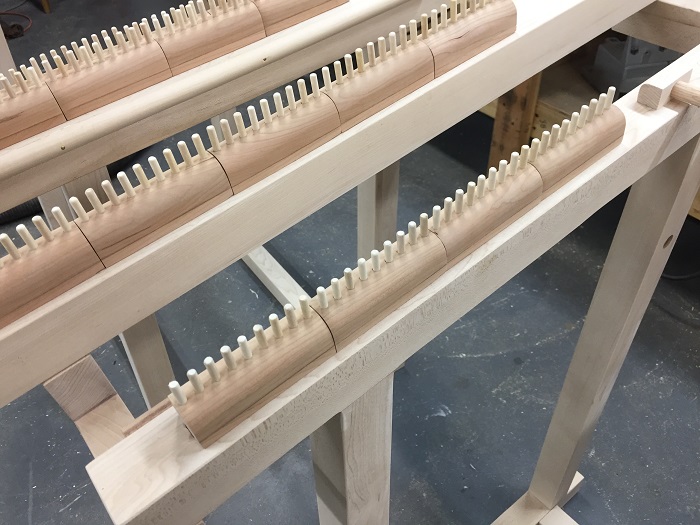 And that’s just one of the two looms I made.   To set up jigs to make all the parts took plenty of time so I decided to go ahead and make two of everything.  Brenda plans on selling one of them to another weaver.

Interestingly, there is only one guy in the US that makes these looms and there is a 2.5 year long wait to get one.  From me, Brenda got hers in only two months.  Go me!  However, we won’t talk about the fact that she purchased the plans over seven years ago.    Well, I did have to think about it long enough to get it right.  Right?

Anyway, the looms are nearly done and I can soon turn my attention to getting Pandora ready for spring.    There’s still plenty to do and I’ll be spending days aboard Pandora scraping old glue off of the overhead so I can put in a new head-liner.  I’ve decided to hire the guy who did my cockpit enclosure to install the new material.   That way I can be sure that it will turn out perfectly and I HAVE to have PERFECT.

I’ll also be taking out the last of the less efficient lighting and replacing it with LEDs so I won’t have to be quite so stingy with cabin lighting when we are on the hook.   Pandora’s cabin lighting has been mostly upgraded but there are still the overhead halogen puck lights that need attention plus a number of high pressure fluorescent fixtures that aren’t very efficient either.

And, well, there’s always the quest of trying to fix those small if persistent leaks coming through that bolt hole on the traveler, under a line clutch and one of the granny bars that drip down below from time too time.  Annoying, but a bit of proper bedding should do the trick.   Of course that all sounds easy enough but to get things sorted out and ready for that “bit of proper bedding” will take hours or days.

And, remember my last post?  The one about our visiting the UK and renting a Narrow Boat?  Well, NEVER MIND…

Brenda and I both decided that being away for a month wasn’t all that great an idea after all and we’ve decided to put that trip off and go to CA instead for a week to see our son Chris and his girlfriend Melody.    We’ve been looking forward to seeing them again so that’s the plan.

We’ve also been visiting with our son’s growing family.   They are getting bigger and louder by the day.  It’s fun to be with them but just about everything that gets done all day long involves bathing, bouncing, playing, feeding or changing diapers along with putting them down for a nap and then getting them up  again.  Really adorable but what a handful… 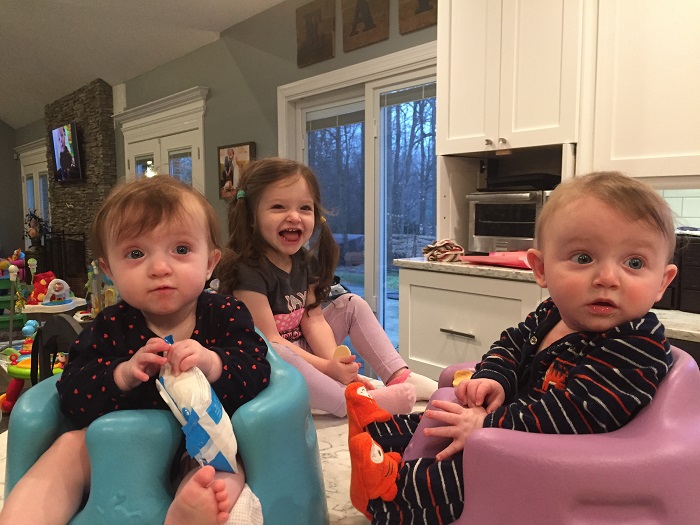 Feed me, FEED ME “Tepe”!!!  That’s Tori’s name for me, Grandpa.   Double adorable.  The best thing about being the oldest is that you get “naming rights”. 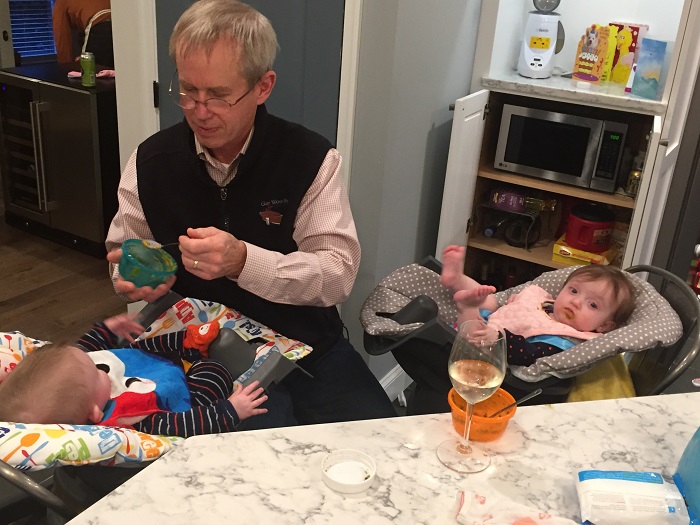 The morning after we returned home from our visit, Brenda and I both were struck by how peaceful it was to have coffee and read the paper in ABSOLUTE SILENCE.  We miss them but not until after that second cup of coffee and an hour spent reading the paper.   Such are the joys of being a grandparent.

So, back to sailing.   We still plan on going to Maine this summer and I hope for a brief visit up the St John river in Canada.   I’ll be running Pandora to Annapolis for the sailboat show in October.  After that, on to Hampton VA and the Salty Dawg Rally to the Caribbean and my “home island”,  Antigua.

I should mention that there is a load of activities planned for our arrival in Antigua in November and I sure hope that at least one of you will decide to go there too.   The events are great and I should know as I’m port captain and set them all up.   Check out what’s planned for our arrival.   The page is still a bit rudimentary but it will be fleshed out more soon.   While you’re at it, why not sign up for the rally now.  And, of course, make it Antigua, I will.   Everyone I’ve been working with in Antigua has been so supportive and the government is even taking a booth at the Annapolis boat show as a result of my prodding.

And speaking of signing up.  Put the “Open Boat Blue Water Weekend” on your calendar too.  In my “spare time” I have been working on this meeting at the Essex Yacht Club beginning June 21st for three days focused on preparing skippers, boats and crew for safe and fun, well mostly fun, blue water passages.  And yes, you can sign up for that too.

But wait, there’s more…  I’ve been asked to give a talk on July 23rd as part of the Camden Yacht Club’s Summer Speakers’ Sunset Series.   I’ll be speaking on behalf of the rally and about cruising the Windward Islands, south of Antigua, an area that I just love.    The event is also a rendezvous of the Salty Dawg Sailing Association and they have a signup page if you’re interested.  It’s free.

The Camden Yacht Club is a beautiful spot with a view of the Camden Hills from the clubhouse. 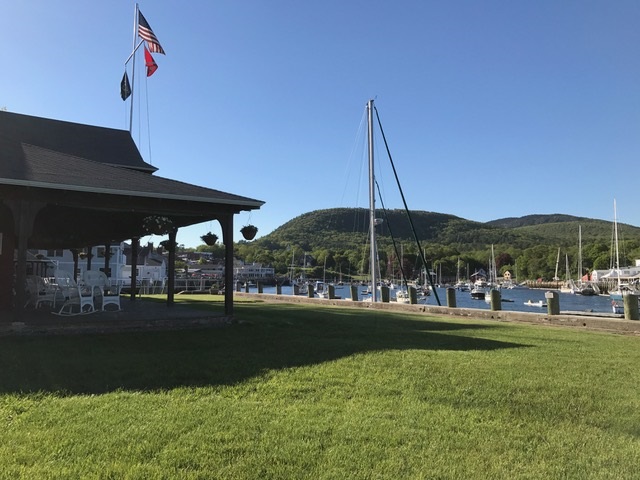 Other than that, I’m just hanging around waiting for the crocus to come up hinting that spring is just around the corner.   And, now that the “takawhatervers” are nearly done, I can turn my attention back to Pandora so that I’ll be ready in time for some summer cruising.

Oh yeah, and Brenda wants some bar stools for the kitchen so I’ll have to somehow fit that in too.  And, the passerelle (boarding ramp) for Pandora, almost forgot that.

So, there you have it.   Nothing to do except to wait for spring except, well, except just about everything.    A sign, please, at least give me a sign…

But, you know they say, “busy people are happy people”.  Than I must be about the happiest guy around.  Well, the happiest one with dry feet at least.

One response to “Waiting for the crocus to come up. A sign. Anything…”