The boys on the boat. Is that safe?

As I have mentioned, Pandora is on the hard and me landlocked in freezing New England for the winter.   As a result of my “incarceration on the hard” I have also found myself thinking about “summers of old” and the sailing that Brenda and I did together and then later, with the boys, Rob and Chris who arrived on the scene, in that order.

From the time that Brenda and I married in 1977, you can do the math, but it’s been a good long while, we have had a boat, beginning two years after we married and with only a single year break when our second, Christopher was born.  Boating has been a big part of our lives together.

Recently I wrote about the purchases of Tao, our first boat, in the late 70s and since that post, I uncovered this lovely shot of her.  Chris and Pat were aboard for that particular run.    Those were the “pre-child” years and we had a lot of fun.

Note the long bowsprit that I added, complete with a laminated in “hog”, or bend.   The point was to set a small jib on it to get a bit more speed.  It really never worked all that well but sure looked snazzy and was a great spot to hang a CQR anchor.   And, with her “sprit”, what a great looking boat. 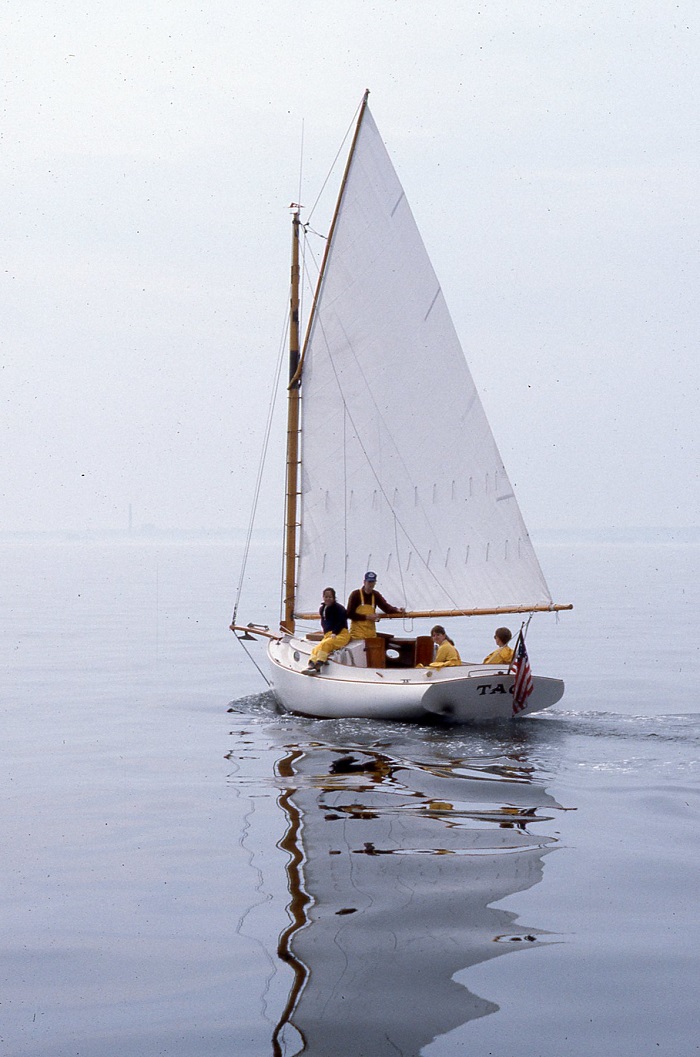 Anyway, I was speaking of fun, but I won’t talk about the fateful evening that Pat, who happens to be of second generation of Japanese heritage, about how she acquainted us with sake.  No, I take that back, I will tell…

Anyway, we were anchored off of Norwalk CT on Long Island Sound and somehow, after a cup or more, perhaps a lot more, of sake, we somehow managed to drop the sake-heating pan overboard.

“So, Bob, were you able to get the pot back?”   Actually, I did as somehow I had the presence of mind, in the “heat of the moment”, get it, the pot we “heated” the sake in?,  to drop a “lead line” over the stern with a float, to mark the spot.

Lead line you ask?  For those of you that aren’t “of a certain age”, it’s a lead weight of several pounds that is attached to a piece of line with knots every 6′, or fathom, that is tossed overboard to determine the depth.  Of course, you have to hold the bitter end.  However, nobody carries one of those these days with the advent of electronic depth finders.

Anyway, the next morning I went for a swim to retrieve the pot and probably to clear my sake muddled head.    Over the years we spent many days and nights with Chris and Pat and once they purchased their own boat, a lovely little 23′ Seasprite and we rafted up nearly every weekend.   Of course, by that point we had sold Tao and moved up as well, if going from 20′ to 22′ was really “up”, to our Marshall 22 Sappho. 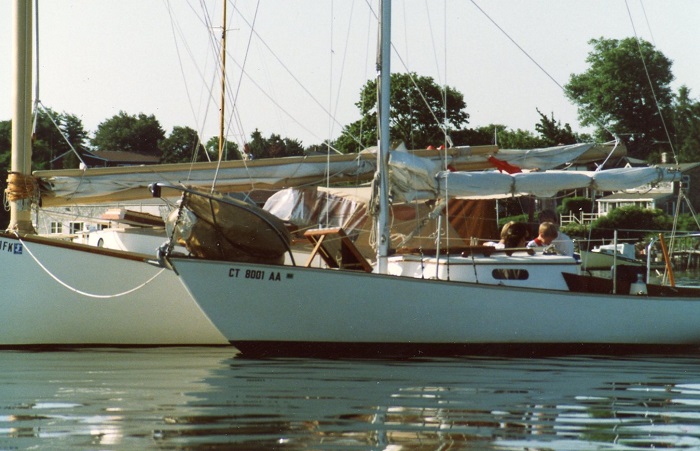 We had many fun weekends aboard and some still involved sake. 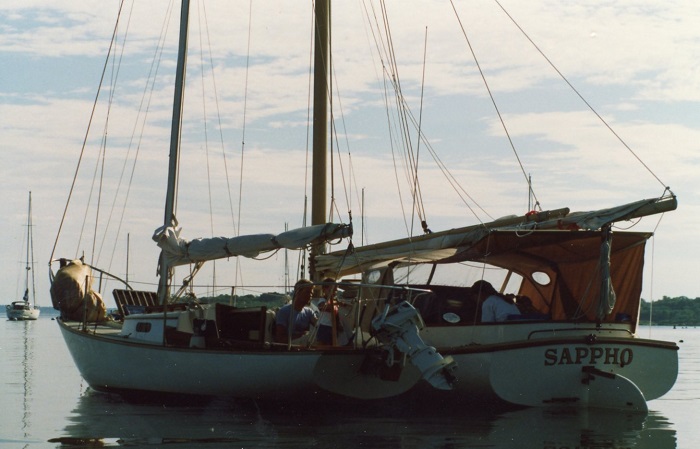 So, after perhaps one too many nights afloat, perhaps with more sake, somehow Brenda began to change shape, especially in one particular spot.  How’d that happen? 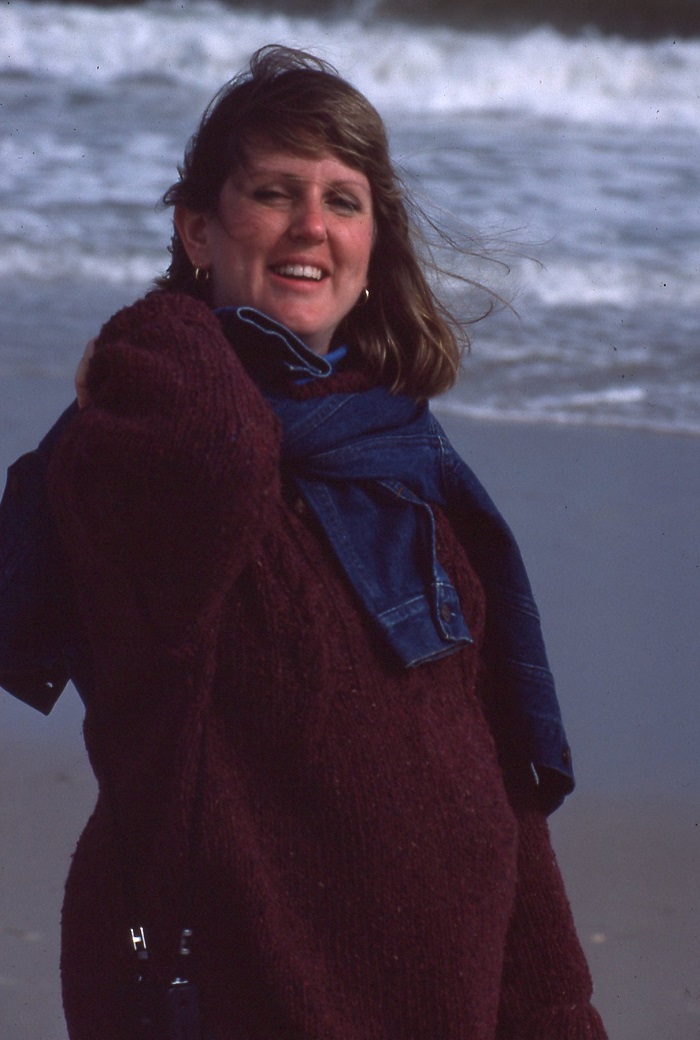 Suddenly, we had babies on board.   Both Rob and Chris were aboard by 3 months old, 25 months apart, of course.

And, speaking of having small children aboard, Brenda recalls a particularly upsetting visit with Christopher’s pediatrician when he questioned her about the mosquito bites that he had “acquired” the prior weekend.   When she told him that he had been aboard a small boat. his reaction was a less than supportive when he said “is that safe”.  In her head she wailed “I, I, I don’t knoooow…”

Go ahead Chris, have a sip of beer, it will take the edge off of those skeeter bites. 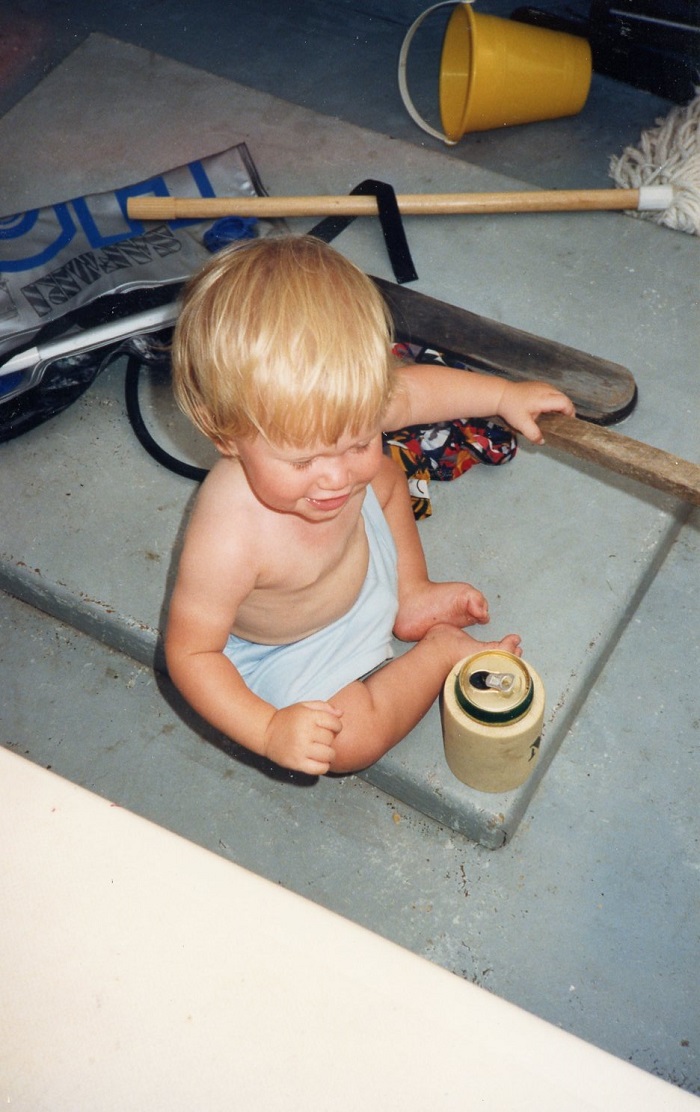 Boating aside, we still vacationed up in the Adirondacks for a number of years before chucking that for more time aboard.  Yes, I know that this doesn’t really fit in the post but it’s such a great shot, I had to use it. 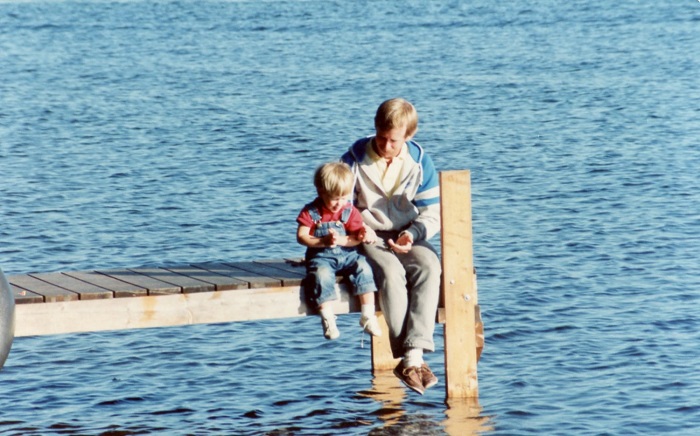 Over the years, the boys got bigger. 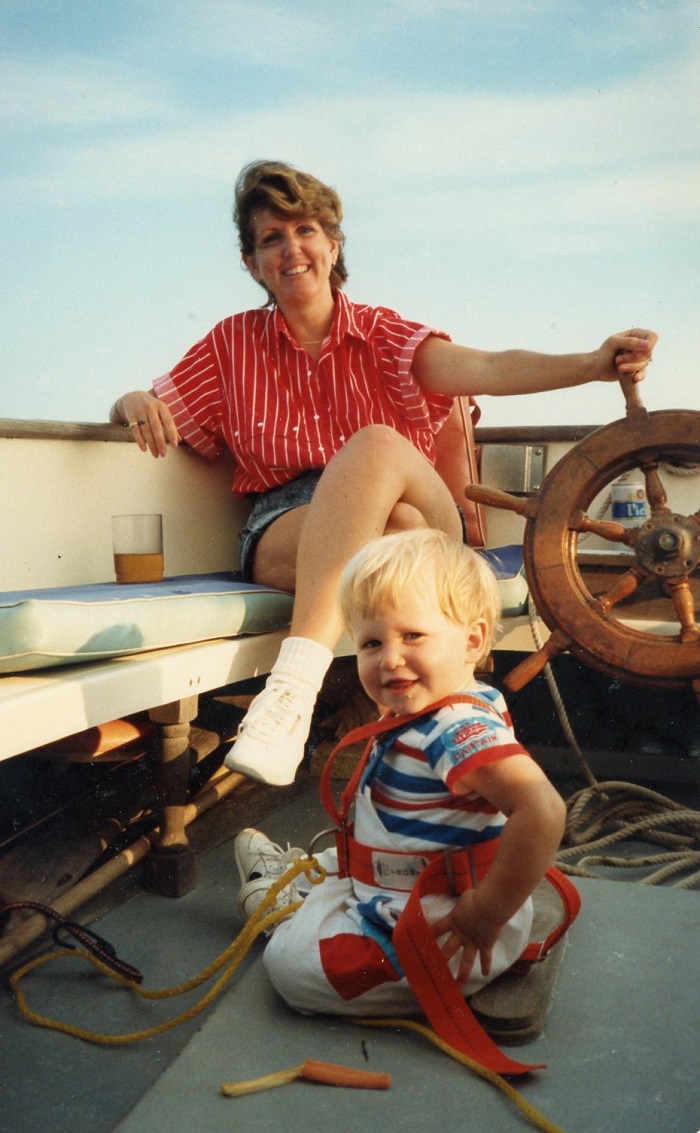 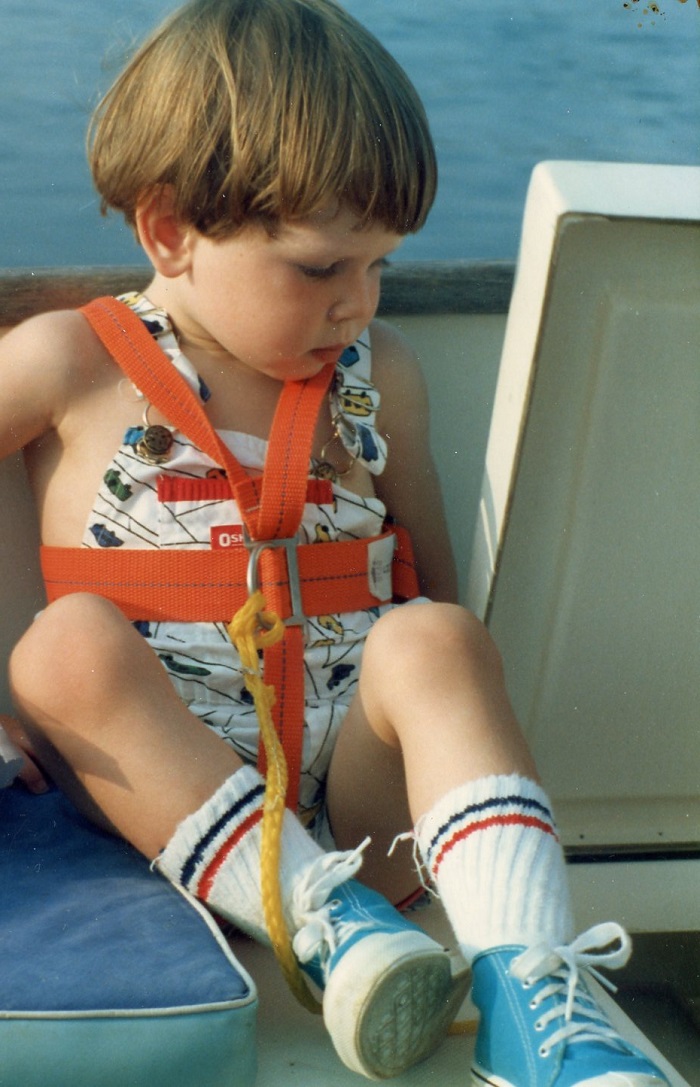 And then even a bit bigger. 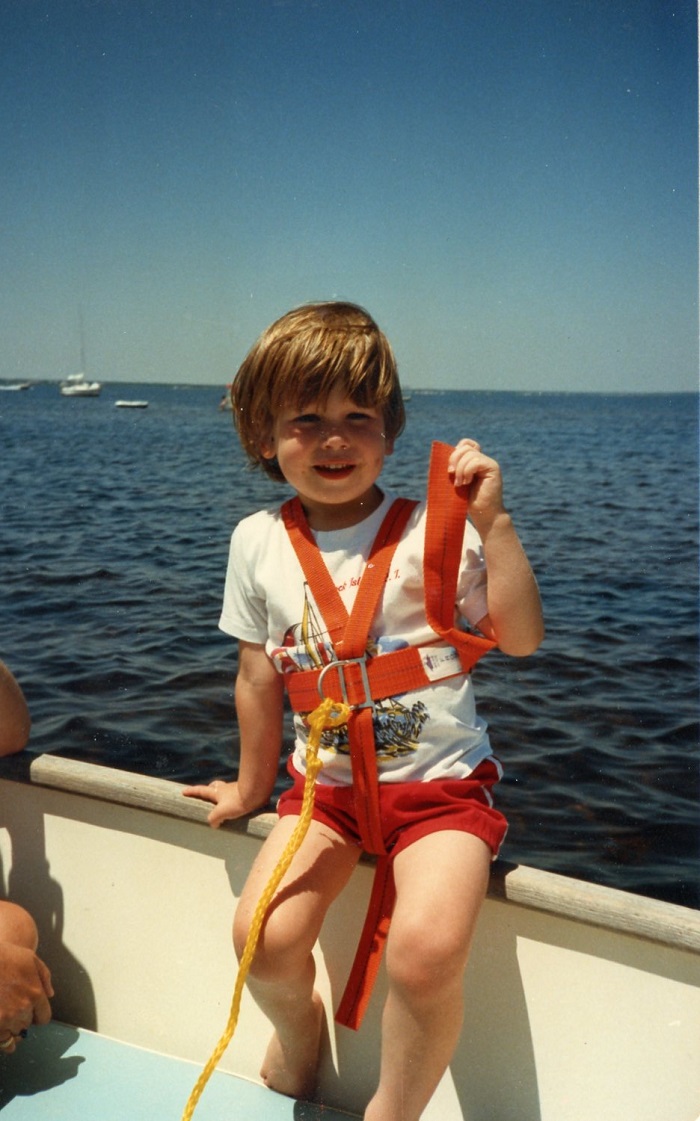 We fed ducks.  Isn’t that what all kids do?  And always with the most nutritious white Wonder Bread, of course. 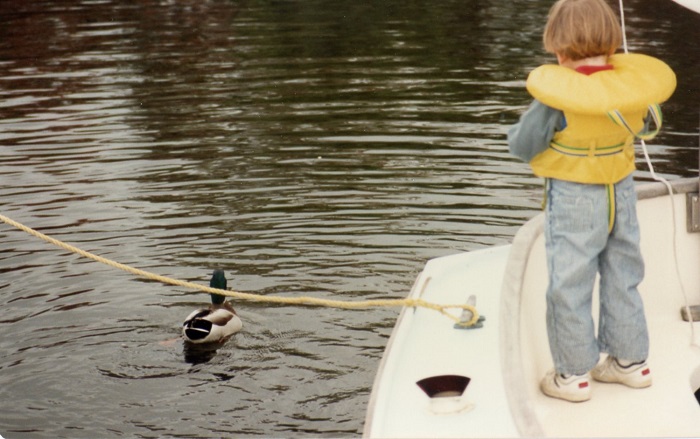 Along the way we joined in on a big celebration of The Catboat Association at Mystic Seaport. 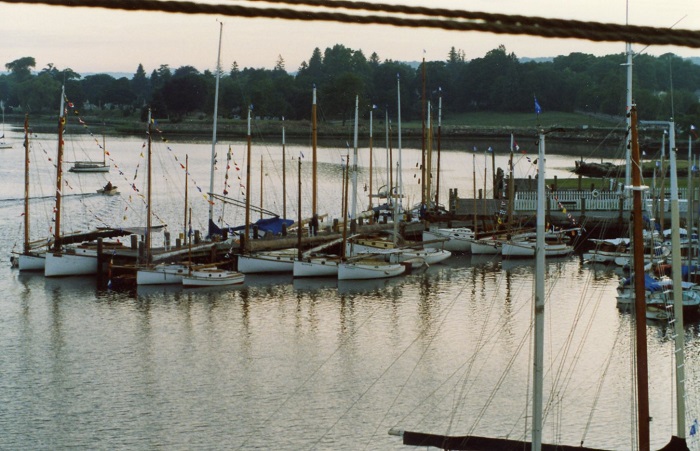 There were many catboats, a lot of catboats.   These photos were taken from high up in the rigging of the Charles W. Morgan.   Not by me, I am too much of a chicken for heights and it was a clandestine visit to boot. 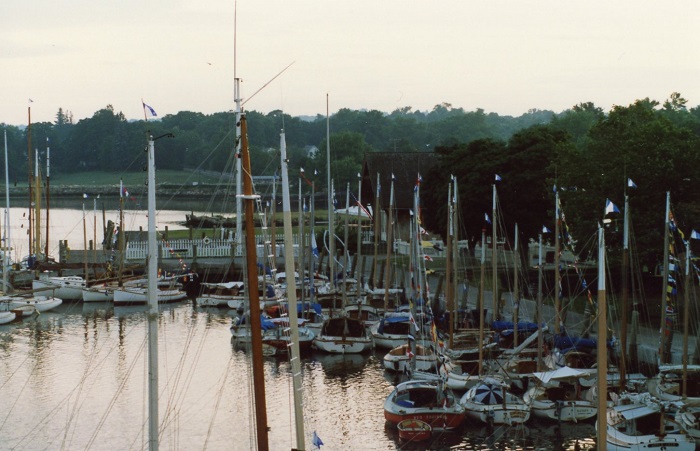 Those were great times.   Then we were “post-catboat” and onto our much larger at 38′ long, a Pearson Invicta yawl Artemis.  The boys were getting bigger too. 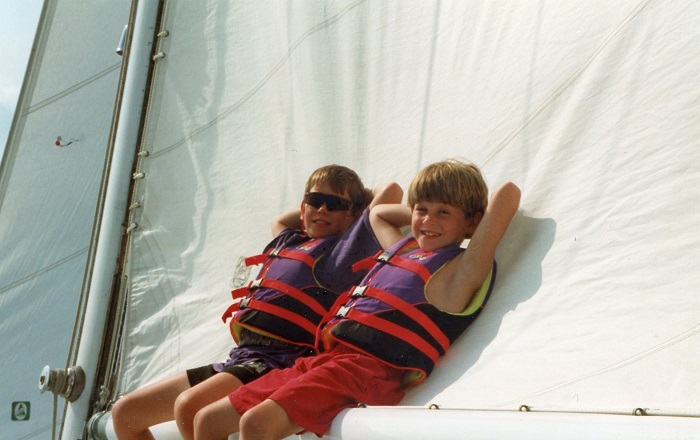 Along the way, Chris and Pat decided to get in on the action and had one of their own, Travers, the first of two for them. 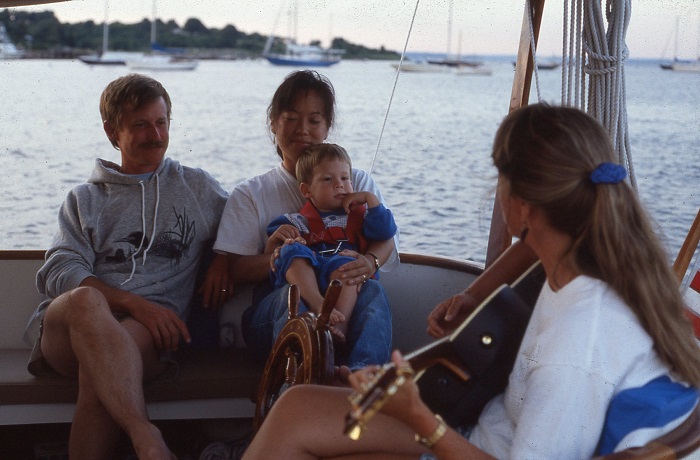 The too got a bigger boat. a Luders 33, which they still own, to this day. 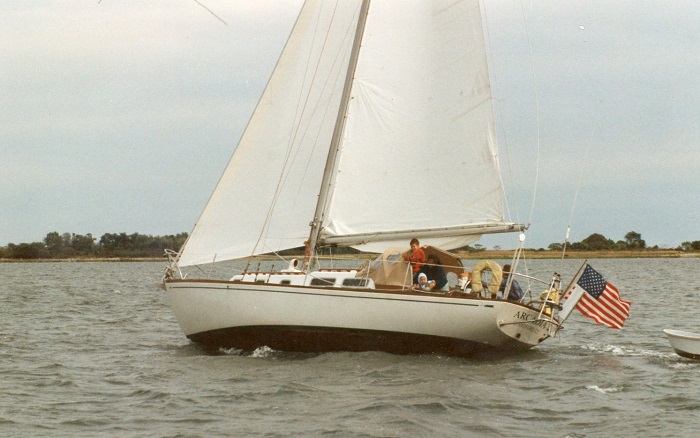 Always a bit of a daredevel, Rob always wanted to go aloft.  This time on a friends boat, a lovely, Alajuea 38, Cimba, owned by our friends Linda and Frank.  Years later they cruised all through the Caribbean, both east and west, staying away for 7 years before “retiring” to Maine.

As an interesting side note, their son Peter, after growing up around all sorts of boats, opted to sail around the world when he graduated from college.  His mother wasn’t amused but he made it back safely. 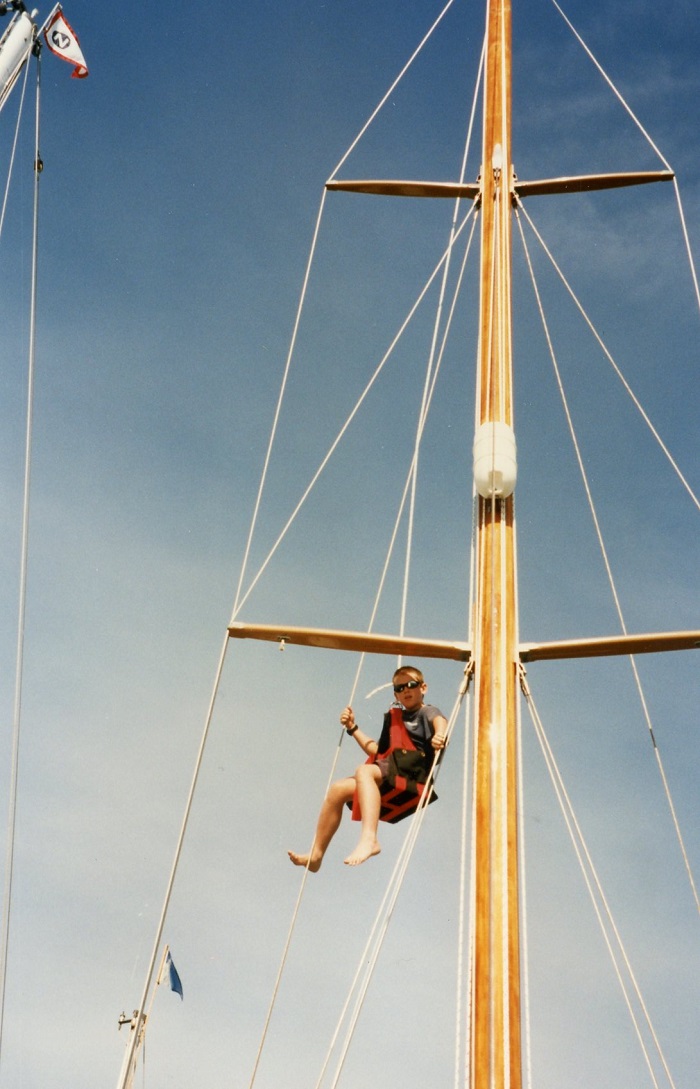 Frank spent time with Rob teaching him some knots.   And yes, Rob was bigger then as well. 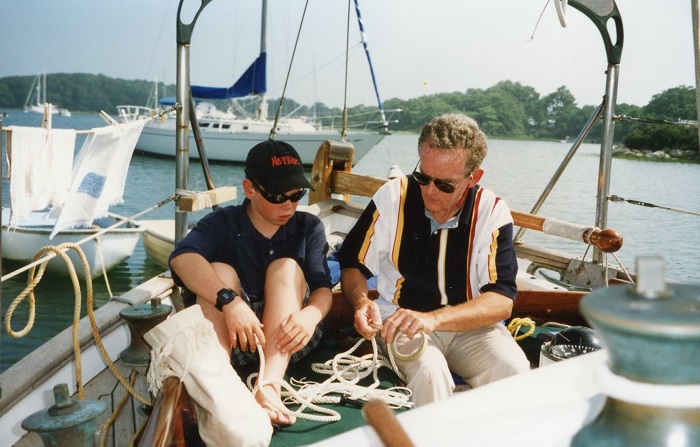 His brother Christopher wasn’t going to be left out from all that fun up the mast.  Both Chris and Rob were relentless in wanting to be aloft, sometimes when we were underway, to the constant torment of their Mother. 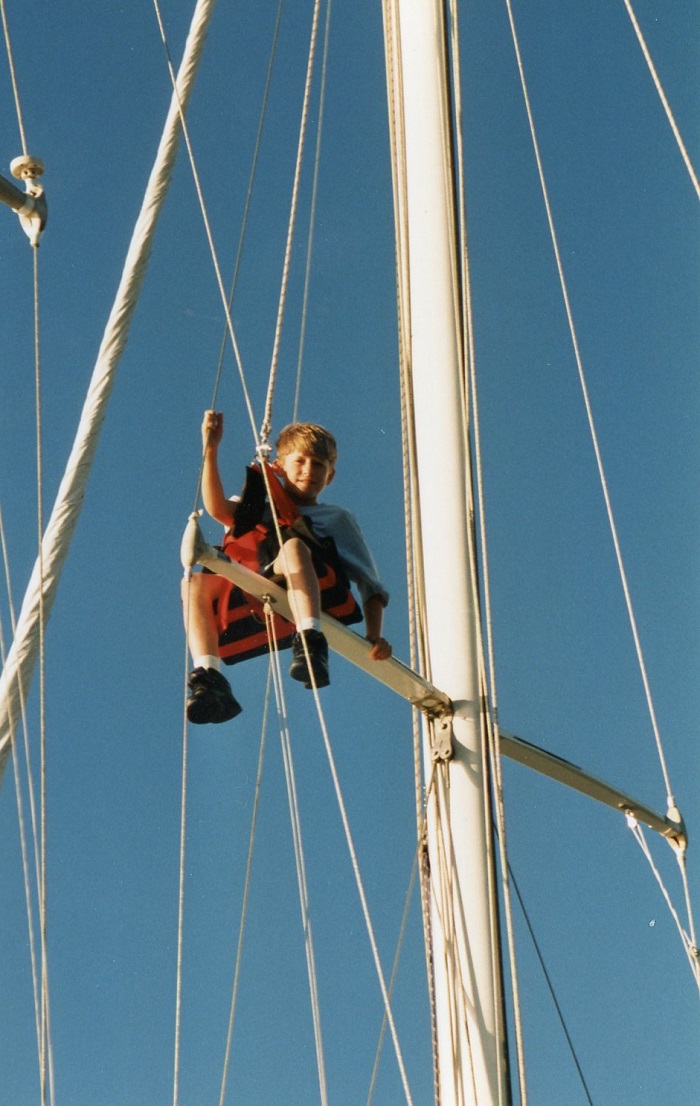 I recall a particularly fun time aloft for the boys as I put them each up the mast while we were sailing near Martha’s Vineyard West Chop,  a particularly bumpy piece of water.   As we bucked along each boy was repeatedly yanked up from the water, by the motion of the boat, and dramatically dumped into the next wave.  They just loved it.

As reported, their mother was not amused.  Perhaps the words of that pediatrician were still echoing in her head “are you sure that’s safe?”  Probably not, but they were wearing life preservers and just loved it.  Safe enough… I guess.

Brenda much preferred it when they horsed around closer to the surface of the water.   At that time we had a lovely little Dyer Dow, a great sailing dink.  However, as we all got bigger, there just wan’t enough freeboard to keep us safe so we graduated to an inflatable, the first of many until I finally got the memo to spend the “big bucks” to get a quality brand that would last more than a few years. 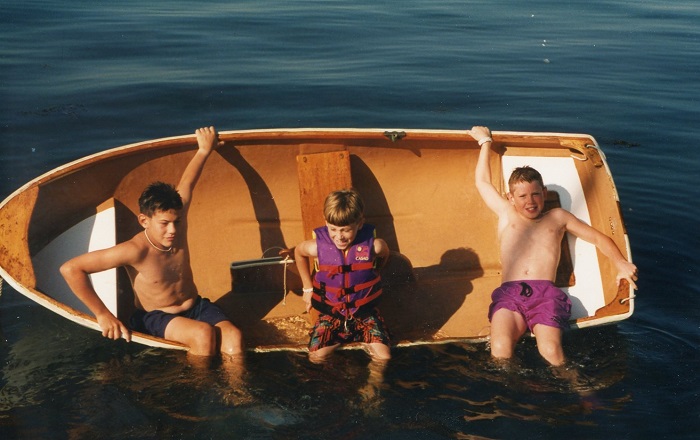 There was even some time for homework, or was it just coloring? 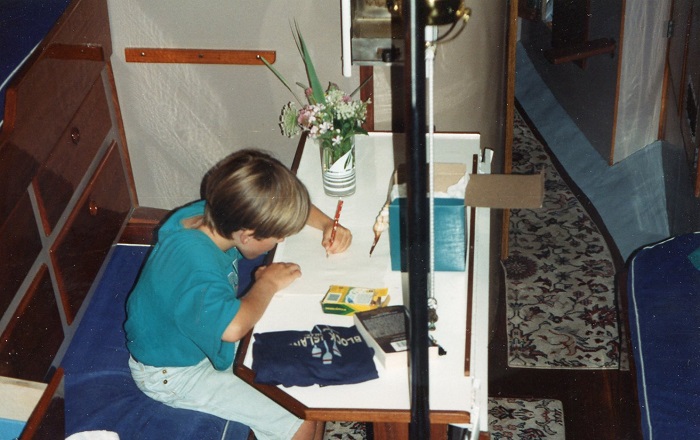 Sure enough, summer turned to fall but that didn’t keep us from the water.   And yes, you can see, if you look closely, that Christopher is wearing a safety harness under his winter coat, attached to a lifeline, to keep him safe, of course. 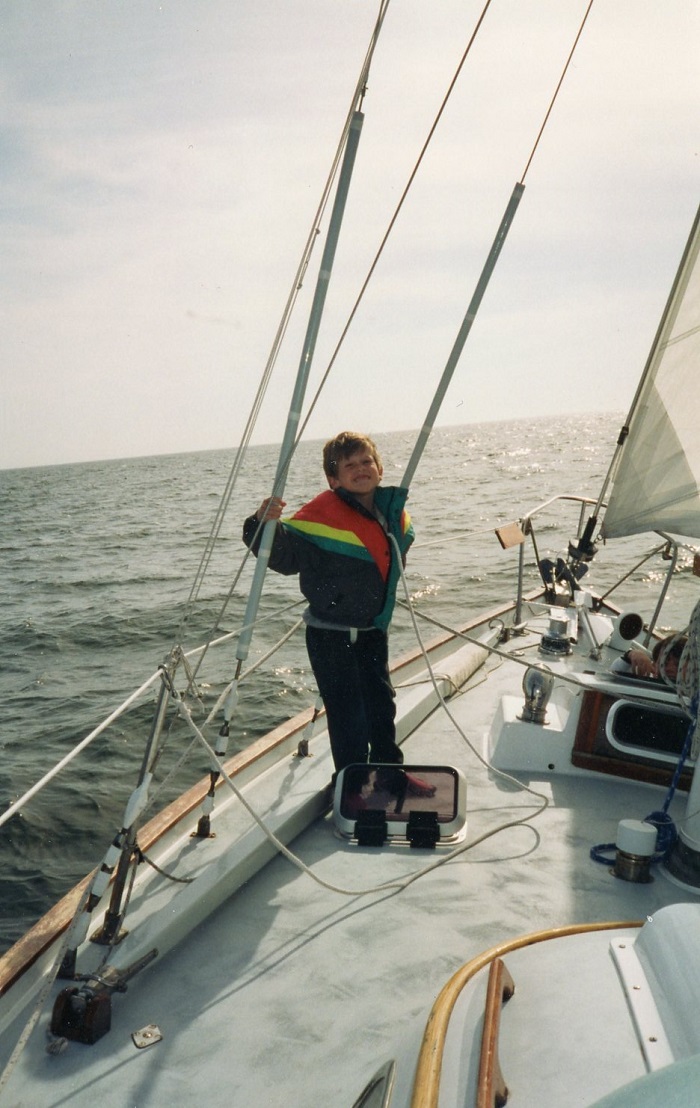 As you can tell, I’ve been digging again through old photos and it’s been a lot of fun thinking back on all those years sailing weekends and on summer vacations aboard a series of increasingly bigger and unfortunately, more complicated and way more expensive boats.

And, as the boats got larger and more complicated, so did the boys.   They are both out on their own now, Rob, with a rapidly growing family, “now they are five”, and Chris so far away, out in Oakland CA, which his mother and I just hate, the distance, not CA.  But they are both doing really well and it’s great to watch them find their way in the world.

Anyway, before I get too weepy, I’ll wrap this up.  For sure, remembering is fun and we sure did have some really nice times aboard with the “boys on the boat”.

Who knows, perhaps soon Brenda and I will be able to take the next generation aboard Pandora and begin the whole process all over again.

But first, we’ll have to convince the mother of those adorable grandchildren that the answer to that question posed by that pediatrician so many years ago “is that safe?” is yes.

Who knows, perhaps one day one of them will decide to sail around the world.

You never know…  And, it would be doubly great if I’m still be around to follow along.  When the time comes, if it does, perhaps I’ll find myself wondering and worrying too if it’s safe.

2 responses to “The boys on the boat. Is that safe?”