There’s no such thing as a “good tan.”

So often, when we have met folks on a boating holiday, they spend hours up on the bow, “catching the rays” so that when they go back to work they will hear “wow, what a great tan.”

However, talk to a derm and they will tell you, having seen so much sun damage and worse, over the years, that there is simply no such thing as a good tan.    Yes, nearly everyone knows that excessive sun, or at least extra ultraviolet (UV) radiation, sunburn or not, is not good for you.

According to the American Cancer Society, melanoma, the most dangerous form of skin cancer, can develop anywhere on your body, even those areas “where the sun don’t shine”.   Interestingly, the risk of melanoma is increasing in people under 40 and understanding what to look for is important before the cancer spreads, leading to better survival.

Unchecked, melanoma is often fatal, in part because even an advanced case often doesn’t look like much, more like a mole with irregular boarders.    This image shows how innocuous it can appear. 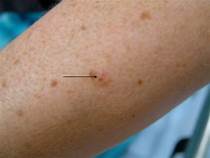 I am particularly focused on this because Brenda was diagnosed with melanoma three years ago after we got back from Cuba.  She had noticed a small spot on her arm some months earlier,when we were in the Bahamas, that looked a lot like the spot in the photo above but it wasn’t until we returned home in May that she had a dermatologist at Yale Medicine check it out.   Fortunately for Brenda, hers had only progressed slightly beyond stage one, but that diagnosis was upsetting in itself as she was told that a recurrence was perhaps 1 in four, not great odds.

Even though the lesion didn’t look like much, the surgery to remove it proved to be quite extensive, involving the removal of the equivalent of a modest “ice cream scoop” of tissue, all the way down to the muscle.  Even more fun was that they then made an incision from the borders of the excised section that extended in both directions nearly to her shoulder and elbow.  This had to be done so that they could pull the edges of the “ice cream scoop” together without causing a divot or pucker where the incision was the deepest.

Additionally, they removed some sentinel nodes in her armpit for testing to see if the cancer had migrated beyond the lesion on her arm.  Fortunately, these came up negative.  The point of telling you this is that even the smallest melanoma is a big deal and is generally dealt with aggressively, which speaks volumes of the danger that it represents.

When Brenda was diagnosed, we did wonder if our sailing days were over because of the need to avoid unnecessary exposure to the sun going forward.  For us, it was doubly important that we find out how much protection from UV that Brenda would have aboard during the brightest portions of the day, from around 10:00 to 16:00 hrs, when the sun was most intense.

With this in mind, I purchased a testing instrument from General Instruments that would accurately measure both UVA and UVB light waves, the parts of the light spectrum that have been identified as being the most damaging to skin.

According to the instrument maker’s website, “The #UV512C UVC light meter is ideal for applications such as UV curing and sterilization, semiconductor fabrication, offset printing, environmental monitoring and industrial process control.”   Ok, sounded pretty official and scientific to me. 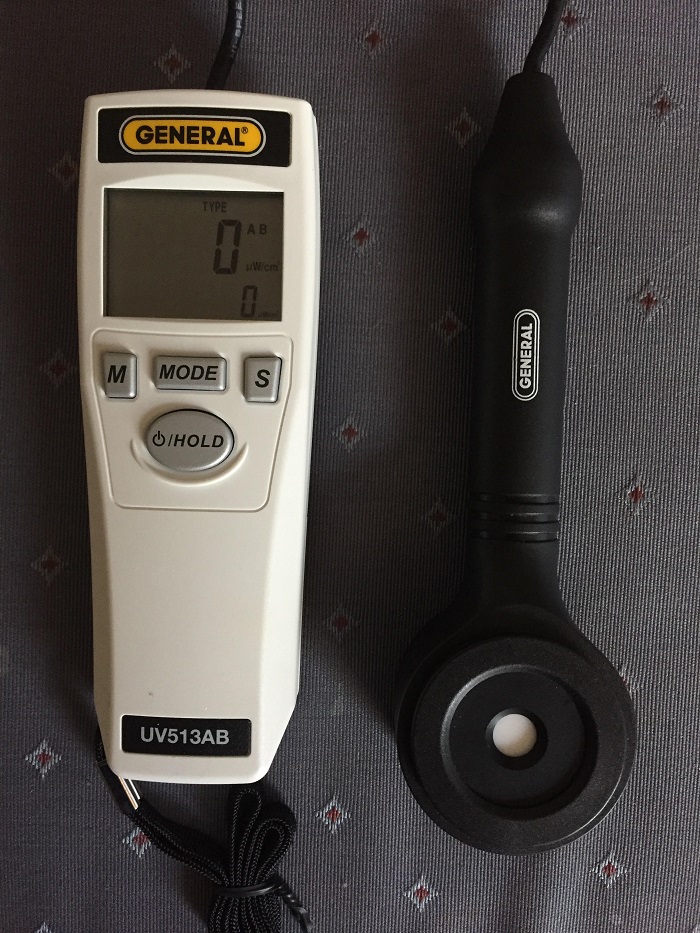 The big question was how much UV would Brenda be exposed to at “high noon” in the Caribbean, aboard Pandora, where we spend a good deal of time each winter.

We’ve also heard, over the years, that you can get a bad burn from “reflected UV” off of the water and this alarmed us as, even with a bimini overhead, it seemed to be an impossible task to eliminate the UV coming in from the sides of our enclosure, reflected off of the water.

In theory, Pandora has better sun protection than most with her hard dodger and fully enclosed cockpit. 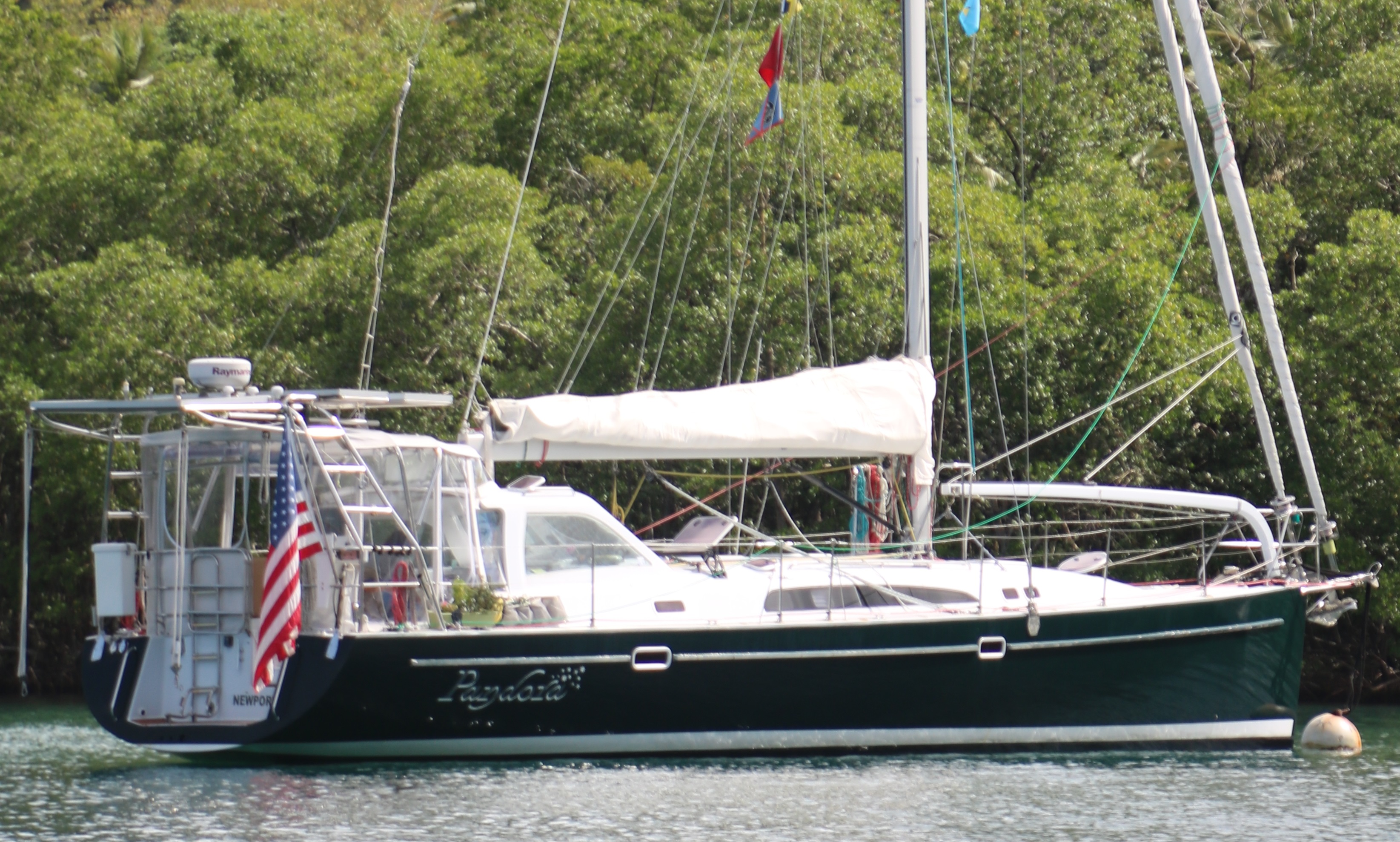 As an aside, you may be wondering if being enclosed all the time is too hot in the tropics, it isn’t.   Actually, the full enclosure has proven to be particularly helpful  at keeping the relentless trade winds to a manageable level.  However, up in the NE, where the winds are often light, we need to open things up much more.

When we were in Antigua, and that’s plenty far south with really intense sun, even in the winter months, I took a number of measurements, with the meter, at noon when the sun is most intense.  Here’s what I found, some of what surprised me.

Control:  As a control I took measurements directly into the noon sun, in a cloudless sky.  The reading, and the highest that will register on the instrument, weas 10,000 units.  Deep shade, away from the water, registered between 500 and 600 units, about 5%.

Sunscreen:  Then I put a small piece of plastic wrap over the sensor and checked full sun again that showed readings in the 8,500 range, suggesting that very thin plastic wrap let through most of the UV light.  Next, I put a very light smear of SPF 15 sunscreen and the reading, again in full sun, was about 2,000.  With a thicker spread of SPF 15, half of that.  SPF 60 yielded a reading of 600, a lot less, about the same as in deep shade.

Surprises:  Perhaps the most interesting readings came from pointing the unit toward the sun at 45 degrees off of the water, simulating “reflective light” where I only received a reading of 2,000, only 20% of full sun.  That was much less than I had expected.  Further, in the middle of the cockpit, where the light was still very bright, the measurements were equivalent to deep shade.

Vinyl blocks UV:  I also took measurements through the clear plastic of the vinyl dodger, both new and old material, and the measurement was, again, zero.   Even old and weathered vinyl cut out 100% of the UV rays.  I found that astonishing, however I guess it does make sense as the material is treated to resist UV degradation.

Glass does not block UV:  My hard dodger has large pieces of tempered glass and I was surprised to find that it only blocked 10% of the UV rays.   All of this suggested that during the brightest parts of the day Brenda was very well protected under the bimini, even if it seemed so bright that sunglasses were required.

Clothing protects from UV:  So, what about clothing?  I tried an old white T shirt and found that, even when wet, it blocked about 95% of UV with a dry shirt letting through somewhat more.  I was particularly surprised by that given all the hype about UV protective clothing.  My test suggests that just about any clothing that covers you up works well, even if it doesn’t have a “UV rating”.  I guess that putting a UV rating on clothing is about the same as saying that a particular shirt has “100% blockage against vampires”.   Works for me.

All of this is good news but I guess that the most surprising thing to me was how low the UV exposure was under the dodger and bimini.  And that clear vinyl windows were just as effective as being down below when it came to exposure, and that even the lightest white clothing, “UV protected” or not, provided good protection.

The good news for Brenda is that two and a half years out from her surgery she is doing well and her doctor told her recently that her risk of recurrence now is “very, very small”, which is good news.

His advice to her is that it’s OK to continue spending time aboard Pandora but to always use plenty of sunscreen and to do her best to stay out of the sun when it is most intense.

One way or the other, we are taking his advice very seriously but it’s nice to know that being aboard Pandora we can still manage the risk.

So, there you have it.  reflected UV isn’t nearly as much of a problem as everyone thinks, sunscreen really does work and most any clothing does an excellent job of keeping harmful UV out.

We continue to keep our fingers crossed that Brenda won’t have a recurrence and every year that passes makes that less likely, which is good news.

All and all, this experience has certainly made the phrase “there’s no such thing as a good tan”, means more to us than ever.

Ok, so with our UV exposure in the winter up here in New England so low, I wonder if we will develop a vitamin D deficiency.  Great, something new to worry about.

I can’t wait till May.  Are we there yet?