In for the long (winter) haul.

I still can’t believe that I am writing these words but this coming Monday Pandora will be hauled for the winter.  FOR THE ENTIRE WINTER.  Once she’s on land, after less than two weeks in the water, I’ll be able to focus on a number of small, and some large, items that need attention after slightly more than a decade in continuing service.  Yes, I am working hard to put a positive spin on it.

Not to wallow in self pity, but this is the sort of view I am used to when it’s cold up north.  Pandora in Guadaloupe.  NOT. 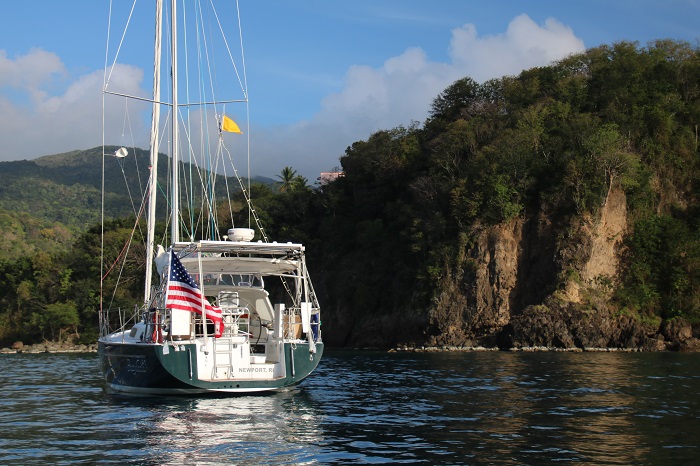 Hauled for the winter?  Yes, she’s been hauled each year but being winterized and put up for the entire winter, is a first and I can’t say that I am thrilled about it.

However, it will be good to focus, with lots of time to do it right, on all the little things like a persistent leak over the galley and a few drips, here and there, from portholes, that have been bugging me for as long as we have owned her.  These leaks, more like drips, can easily be solved by removing and re-bedding the traveler or replacing offending hatch gaskets.  Perhaps “easy” isn’t the right word  with regards to the traveler as much of the headliner will have to be taken down to access the bolts that hold it in place.  But wait!  The headliner will already be taken down to deal with the fallen portions and additional leaks from the bases of the granny bars near the mast.

When you buy a boat one of the inevitable questions is “are there leaks” to which the answer is always an enthusiastic “no, she’s as dry as a desert”.   Ok…

I’ll also be re-bedding the large windows in the hard dodger as the are showing signs of coming “unglued” in some of the corners.   I expect that it won’t be a terrible job once I understand how to get them out and what the best material will be to put them back in place.  Also, all of the side portholes will have to be removed to make it possible to replace the headliner on the sides of the cabin.   That’s going to be a pretty big job, and one that I won’t be able to tackle until the boat is fully covered to protect it from the elements.

Recently, I wrote about my desire to get a passerelle, a gangway to board Pandora from the stern when she is Med moored.  I was all set to order one of these from a company in the UK but held back as questions arose about our run south.  I am glad that I did as I wasn’t all the crazy about the design that I had chosen.  The problem is that in order to come up with a design that we could  afford, ie: in the neighborhood of one boat dollar, we were going to have to settle on an aluminum version.    That’ OK but a bit heavy and to lug it around the boat could be challenging as it wasn’t going to be all that light.

In case you are curious about just how to accomplish a Med moore, this video gives a good feel for the process.  Trust me though, it’s not as easy as they make it look.  Well, not for us, at least.

With the stern toward the dock, it’s a lot easier to board the boat with a promper ramp, so, with the extra time home this winter, I’ll have time to make my own.  However, before you think “loving hands at home”, I’ll be getting advice and support from an old friend, Peter, who has a company that does complex composite construction for the Navy.   Peter was enthusiastic about helping me and even offered me the opportunity to “pick through our scrap heap” to find some materials to make a really lightweight ramp.

Apparently, his shop has some high tech aluminum and epoxy honeycomb material that is very strong and super light.   Learning how to put these materials together will be pretty neat.   I have seen some examples of carbon fiber/composite units in Antigua but never thought that I’d be able to find a way to afford one for Pandora.

By comparison, a lightweight aluminum version weighs in at about 30lbs and one constructed from carbon fiber is less than half of that weight.  This is what the aluminum version looks like. 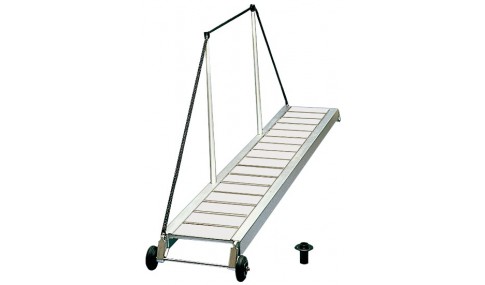 And composite.   I could never afford one of these as they run about 3 to 5 boat dollars.   However, if I can make one myself… Heck. I’d even be able to put yet another Pandora logo on one like this.   Pretty slick.  However, I have no allusion that I could make something so refined but I’ll bet that with Peter’s help, I’d be able to come up with something that is worthy of Pandora.  More to come on that. 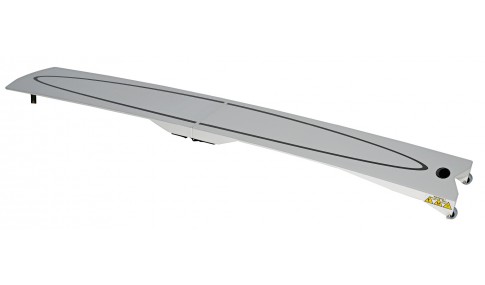 So, with what now seems like unlimited time on my hands, I’ll be able to tackle these jobs.

Perhaps one of the toughest things about my being a CLOD “cruiser living on dirt” for a time, will be coming up with ideas to put in posts.  It’s tough to come up with ideas for posts when I am not actually out there doing it.    However, I am committed to posting regularly, hopefully at least once a week so wish me luck.

In the short term, I’ll be focused on winterizing Pandora and with all her complex systems, it’s going to be a learning experience and will surely feel like a scavenger hunt as I sort through all of the details.

So, I promise that I’ll work hard to get Pandora in good shape so I can spend some time aboard next summer and then head off to Antigua next fall.  That will give me something to write about.

And, speaking of next summer, we have spent many summers in Maine over the years but none since I retired.   Along the way, I have wanted to visit the St John River, way up in the Bay of Fundy, famous for really high tides.    There is a bridge over the falls that is almost 80′ high at slack tide and I understand that you can only make the run during a brief 15 minute window at slack tide.  At low tide the river turns into a waterfall with raging rapids but you can get through at high tide during the very brief period that the water is slack and calm.

I am always nervous when going under a bridge, even when I am confident that we have adequate room.  This video of a large sailboat going under the bridge with a mast that’s actually higher than the bridge is tall is interesting.   They use a large waterbag to pull her over.  It’s a squeaker.
I guess that’s about it for now. However, before I break, I’ll share a brief passage that, for me, nicely sums up what cruising is all about. It’s excerpted from the book “The America, The Story of the World’s Most Famous Yacht”  It’s long out of print but you can get a used copy on Amazon.   It’s a fascinating book and well worth reading.  For example, the yacht for which the America’s Cup is named was sold in England immediately after she won that famous first race.  Later in her long life, she was owned by Union Navy and served as a blockade runner against the Confederates during the Civil War.

This quote is from a letter written by the then owner of the Yacht America, Ben Butler in 1878, while on a cruise in Nova Scotia and the Gulf of St Lawrence, with his son Paul.

“I suppose that you know the qualifications of a yachtsman… to wit, to be able to eat and drink unlimitedly, not to be seasick more than one-half the time and keep good natured under difficulties if any occur, especially in drizzly weather, and to be able to play any ordinary game of cards except Kino, which is strictly forbidden on the ground that it requires to much mathematics as to be inadmissible.  The outfit will need to be the thickest possible clothing and roughest clothing, a rubber overcoat and cap if you desire to be on deck when it rains and a reasonable supply of the latest novels in case the yacht library should not be sufficient.”

I guess things haven’t changed much as his thoughts sound about right 140 years later.

And, speaking of “being on deck when it rains”, the hot summer weather here in New England will soon be driven out by cold winter winds.    As a friend once said to me, “when you get to Labor Day you can almost hear the iron doors of summer slam shut.”

Indeed, but hey, it’s going to get better in May.   I’m in for the duration, the long haul, so to speak.   Spring will be here before we know it.

I’m counting on that.  Totally…