It takes a village. What’s that sucking sound?

After a decade of use and thousands of sea miles under her keel, it’s high time for Pandora’s rig to be checked out.  I had known that this was needed when I purchased the boat three years ago as I was pretty sure that her first owner had never removed the rig.  As evidence of this, I had to cut a new opening in the cabinetry to remove one of the fittings that held the mast in place as there was absolutely now way to get at it.   Based on that, I am pretty confident that the rig has been in the entire time since commissioning.   It’s time.

Pandora has rod rigging and it is recommended that it be replaced, or at least carefully checked after 30,000 miles, I think, so one way or the other, it’s high time.  Additionally, as Pandora’s heading into a paint shed this week for a new coat of paint on the hull, the rig needed to come out anyway, so out it came.

I spent hours taking the sails off and making sure that all the wires were labeled and removed in preparation for the job.

On Thursday afternoon Brenda hoisted me up the back stay to remove the SSB antenna wire.  I also loosened the shrouds so that when the crew boarded on Friday morning all would be ready for removal.

She looked pretty forlorn on the dock with the boom removed and sails off. 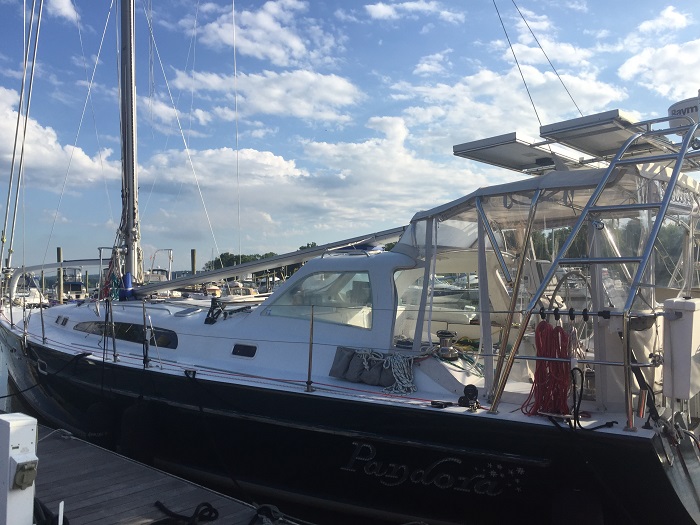 It takes a village, or at least a small mob, to remove even the smallest mast and while Pandora is not a small boat, she’s not all that big.   Brian, the yard manager and default crane guy for the day was ready and looking, well, looking pretty bored, actually. 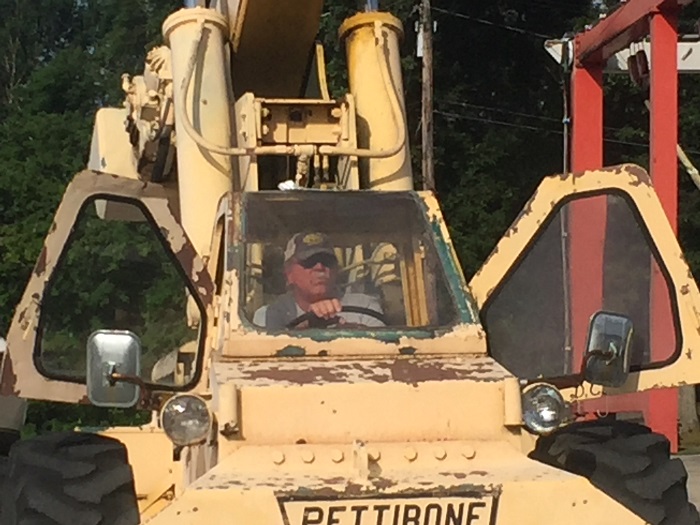 Chris, the “up the mast guy” took his time to be sure that everything was perfect. 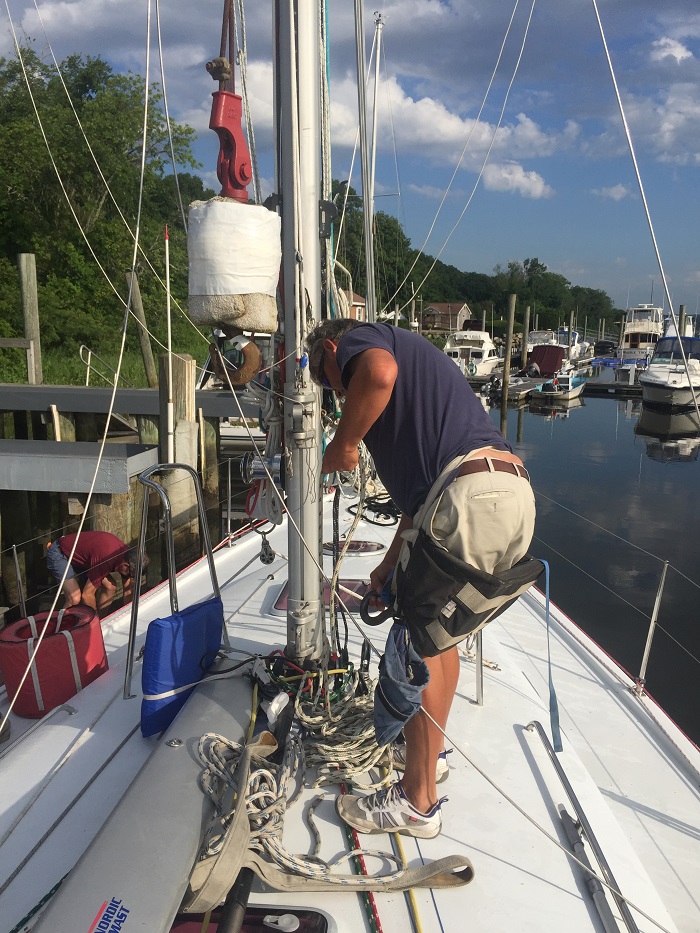 Up the mast to attach the bridle. 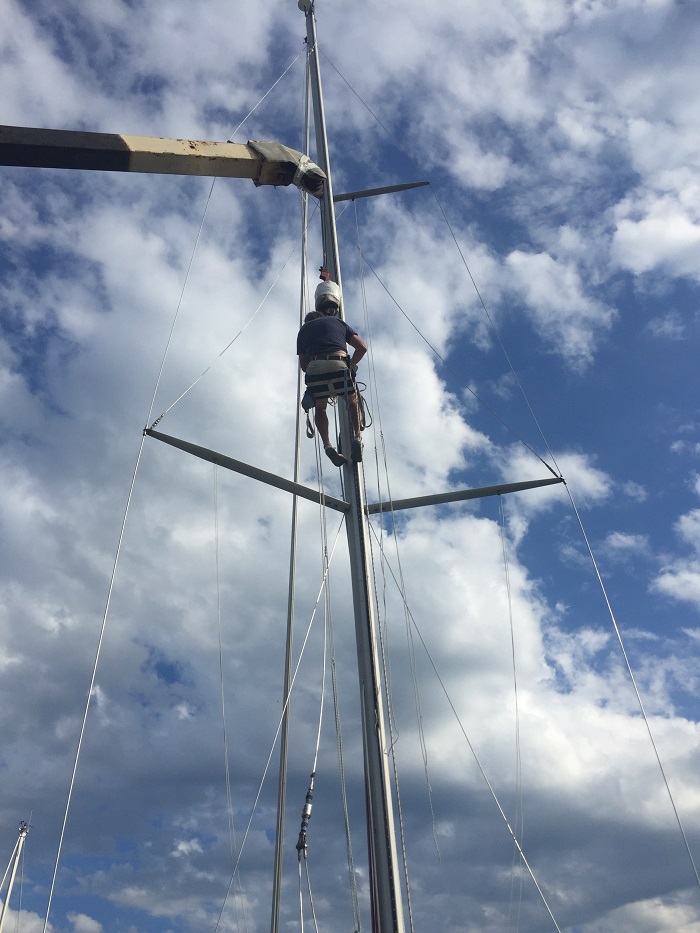 I was very concerned that there was something missing from my prep efforts that would keep the mast from breaking away from the boat after a decade in place and that the crew would have to put the job on hold while I got the prep right.

But, after a few minutes of pulling with the crane, it suddenly lurched up, along with my heart, a foot from the step. 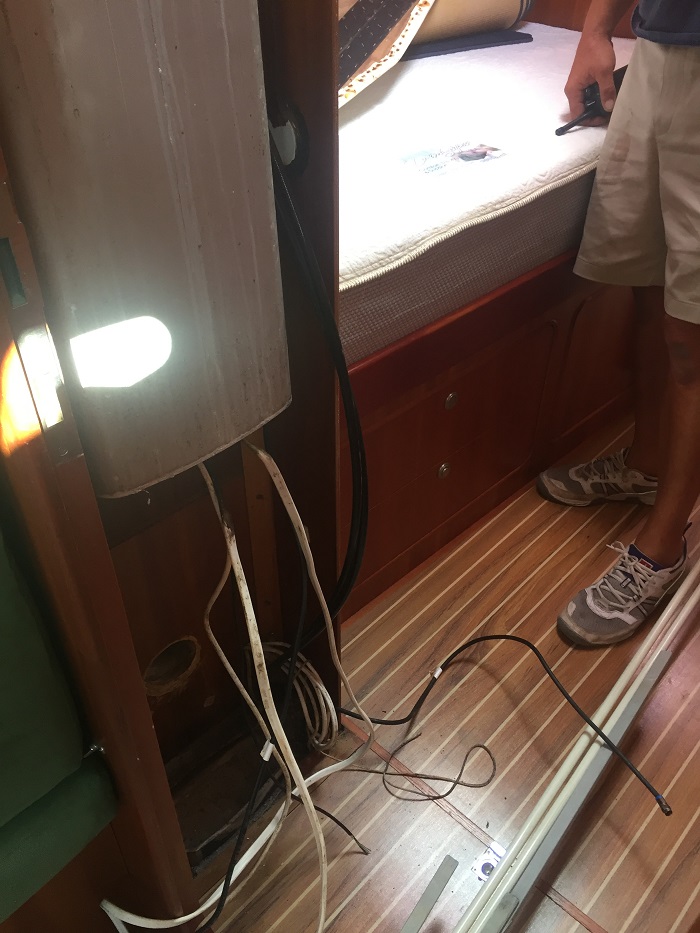 The step itself looked terrible, with lots of corrosion.   All four bolts holding the step in place were badly corroded.  Looks expensive.  This one, in particular, also holds the ground wire.  What about using stainless guys, when you built the boat?  Hmm… 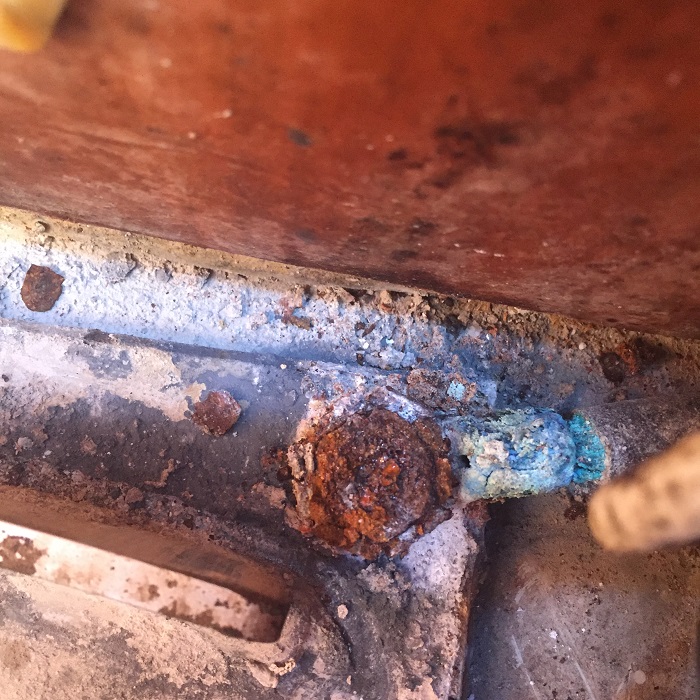 Some of the hydraulic fittings were a mess.  What about using stainless here too?    There’s a number of these that are in very bad shape and I am told that the plated ones that were used are $10 and stainless, $100.  Oh, I get it… 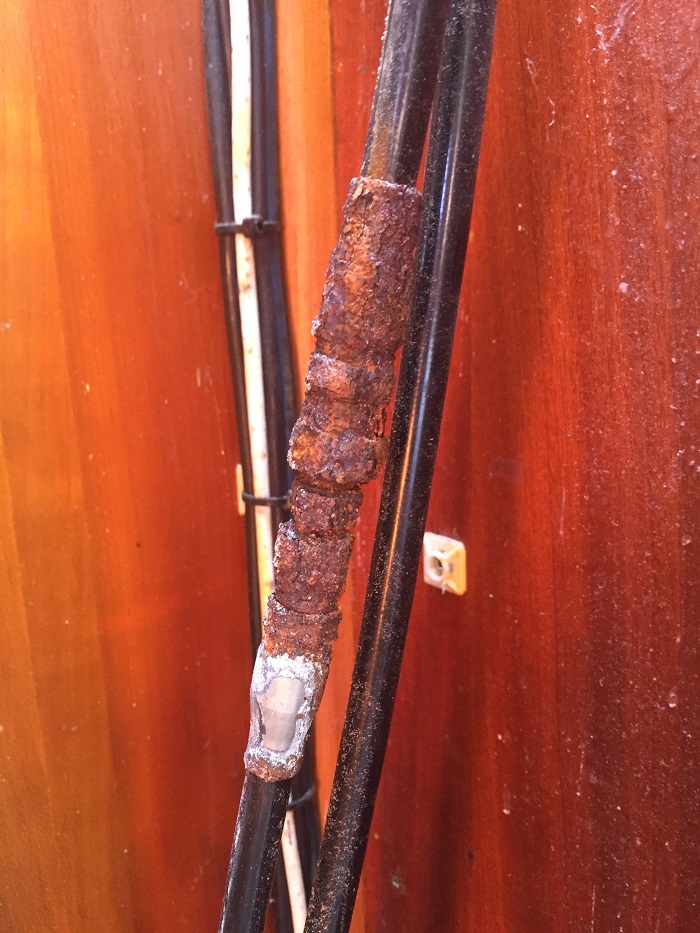 The tide was coming up fast and it looked for a while like we wouldn’t be able to get the mast high enough up to clear the deck. 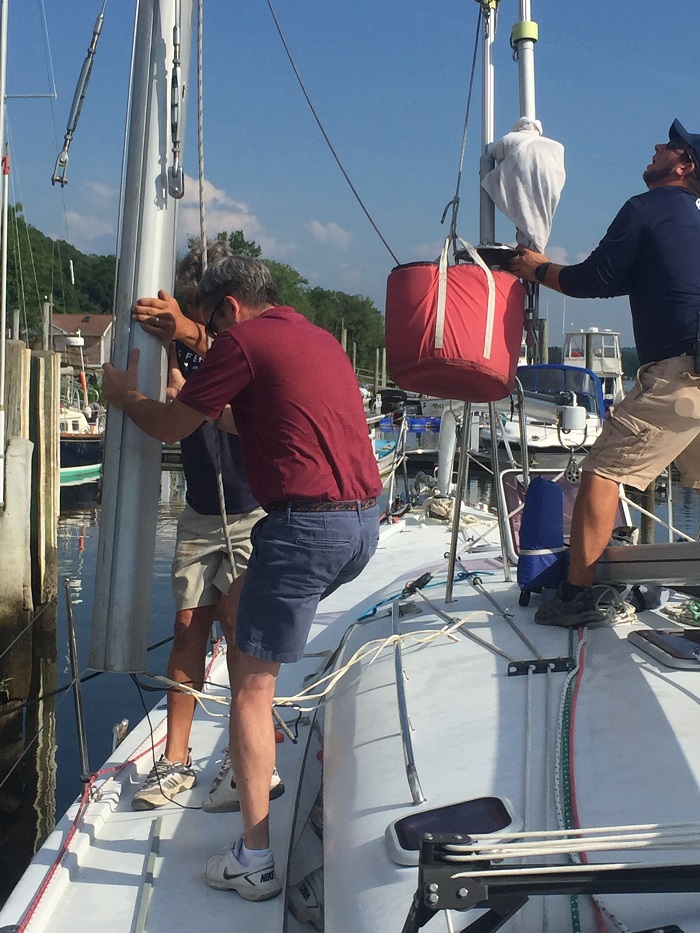 But we did, barely.  If the mast looked big on board, it looked even bigger on land. 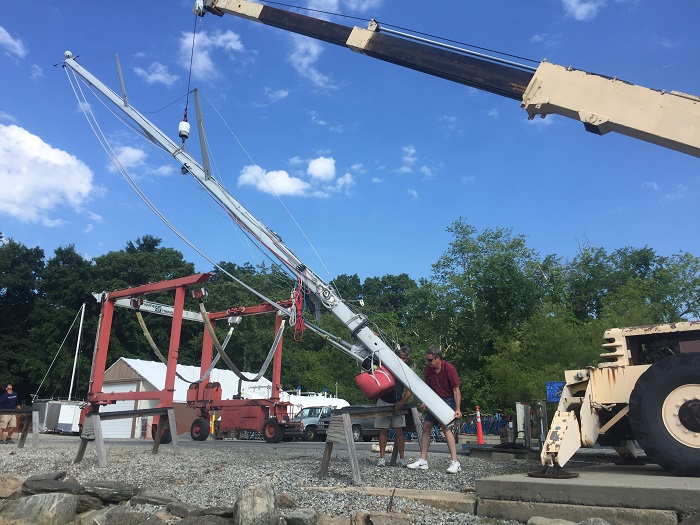 It’s remarkable how many guys it takes to pull a mast.   I can’t even imagine how much it would have cost if I had just said.  “Guys, I want to pull the mast.  Have at it.”  The hours it took me to label everything, pull the sails, run messengers for lines, remove electrical connectors etc…

So, off to Stratford on Monday morning, tomorrow, where Pandora will be hauled and put in a shed for the next five weeks.  I am looking forward to visiting  regularly to chronicle the process of getting her ready for her new paint job.

And, I’ll be able to put some new graphics on her hull and boom and get rid of the nasty ones that are there now.

It’s going to be odd to head down the river and Sound tomorrow with no mast.  Boy, I sure hope that nothing happens with the engine.   You never know…

As complicated as the process of pulling Pandora’s rig was, it’s nothing compared to the rig on a mega yacht.  Check out this short video of how complicated it can be when it’s the rig on a 180′ sloop.  They say that a boat is nothing more than a hole in the water that you pour money into and I’d say that it’s true.    At least I can be confident that my hole is a lot smaller than the owner of that boat.

Having said that, let’s hope that this process doesn’t prove to be any more painful than I expect.

“Wait, is that a sucking sound I hear?  Hey you, let go of my wallet.”

3 responses to “It takes a village. What’s that sucking sound?”