When Brenda and I purchased our very first boat, the 20′ Cape Cod catboat Tao in the late 80s, we kept her in Bridgeport CT and often sailed to Port Jefferson on Long Island and occasionally, destinations as far away as Nantucket and New Jersey.  And let me tell you, that’s a really long way in a 20′ boat with a 5hp diesel engine.

As all my photos of Tao are slides, and exist in a massive pile somewhere in the attic, I can’t show them here.  However, I do have a photo of a painting that my good friend and artist Chris Blossom did for me as a birthday present way back in 1984.  She was a beautiful, if tiny, boat and the closest that we ever got to owing a classic.  Built in the late 70s, she was classic in design but modern in construction. 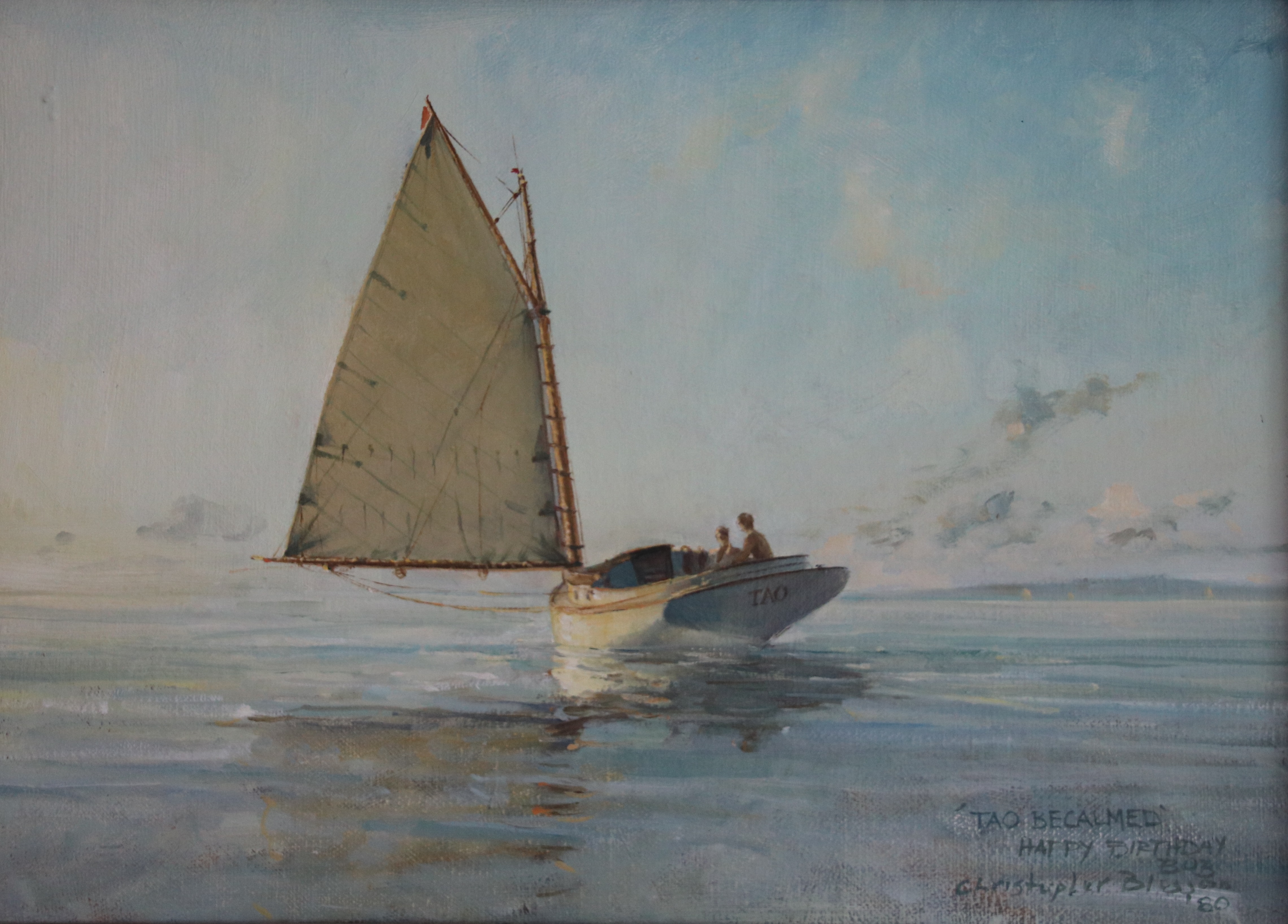 I first spied the yacht Marilee, the subject of this post, in Port Jefferson in the early 80s, when we sailed Tao across Long Island Sound from her home port in  Bridgeport CT.  The ten mile sail seemed like a real journey back then with no dodger and only sitting headroom below.

We’d generally set out from Bridgeport on a Friday evening to make our way to Port Jefferson, or “PJ” as we called it at the time.   We’d rendezvous with friends and raft up with them for the weekend before heading back home on Sunday afternoon.  Some years later, when we all had young children and slightly larger boats, in our case, another catboat, a whopping 2′ longer, we’d designate one of the boats as the “kid boat” and the “adults”, such as we were, would sit on another, enjoying the relative solitude with the kids nearby but not underfoot.

It was during that time that I first saw Marilee, anchored in Port Jefferson harbor with a big brown and yellow striped sun awning covering her decks.  I never saw her under sail and expect that she wasn’t in good enough shape to head out anyway as were so many of the aging classics in those days.

Brenda and I, some years later, became active as board members for The Catboat Association and were invited to a fundraising event in Tom’s River NJ, not far from our home at the time, also in New Jersey, as house guests of Peter Kellogg, the billionaire philanthropist and one of the supporters of Marilee’s restoration for the America’s Cup Jubilee celebration in Cowes England, home to the first race for what was to become the “America’s Cup”.

Peter, at that time, was involved in a fund raiser for the A Cat class in Toms River and, as representatives of the CBA board, Brenda and I were invited to attend the event as his guests and stay at Peter’s summer home.  Even though he was no longer an owner of Marilee at that time, it was clear that he was still very proud of her as we saw all sorts of memorabilia including a painting of her that he had commissioned during his years as a part owner.   So, once again, Marilee, sort of, came back into our lives.

My dream,at the time, was that I’d someday own a “real” classic but as the years passed, and while we once came precariously close to purchasing an old wooden Crosby catboat,  we became much more practical in our choice of boats which is certainly evident in current Pandora, which couldn’t be further afield from Tao.

To be completely candid, Brenda is of the view that if I was truly “balanced” I’d have a little electric launch on the CT river and “stop with all that toing and froing, already” (to the Caribbean).  But, that’s another story.

And, speaking of Pandora, I have posted a LOT of photos in the past but it still seems right to me to put her up yet again for comparison. 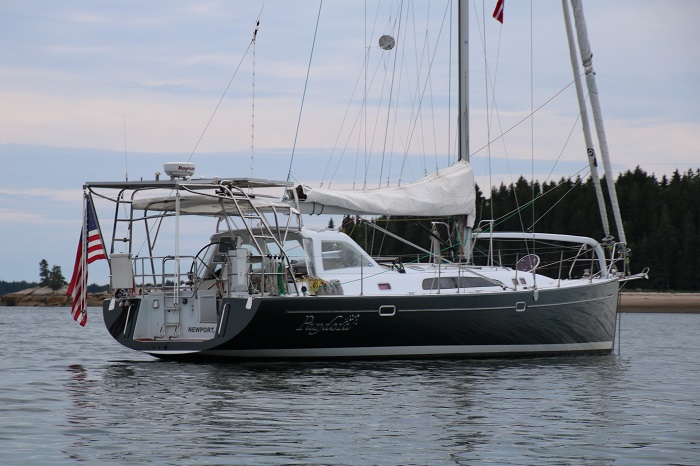 Anyway, back to my story.  So, for the nearly 40 years since first seeing Marilee in Port Jefferson,  I have continued to have an eye for beautiful yachts and am particularly drawn to those that I encountered from the deck of Tao.  Now, many years later, some of these, and Marilee in particular, rejoin our world from time to time.

I have written about many classics over the twelve years that I have kept this blog, and especially during our last two seasons in the Caribbean.   With regards to Marilee, I was just “reintroduced” to her, now for a third time, the very same Marilee that I first saw from the deck of Tao so long ago.

Marilee, is a member of the NY 40 class, designed by the Nat Herreshoff, the iconic yacht designer and was launched in 1926.  She is one of the last two hulls launched of the 14 in the class, built for members of the NY Yacht Club by the Herreshoff company in Bristol RI.  In the photo below, she’s the one with the “fighting 40” boxer logo on her sail.  This was the informal name for the class when they were raced as one designs by members of the club.  I found this shot on her “official” site .  It’s an impressive shot and she’s clearly in good company. 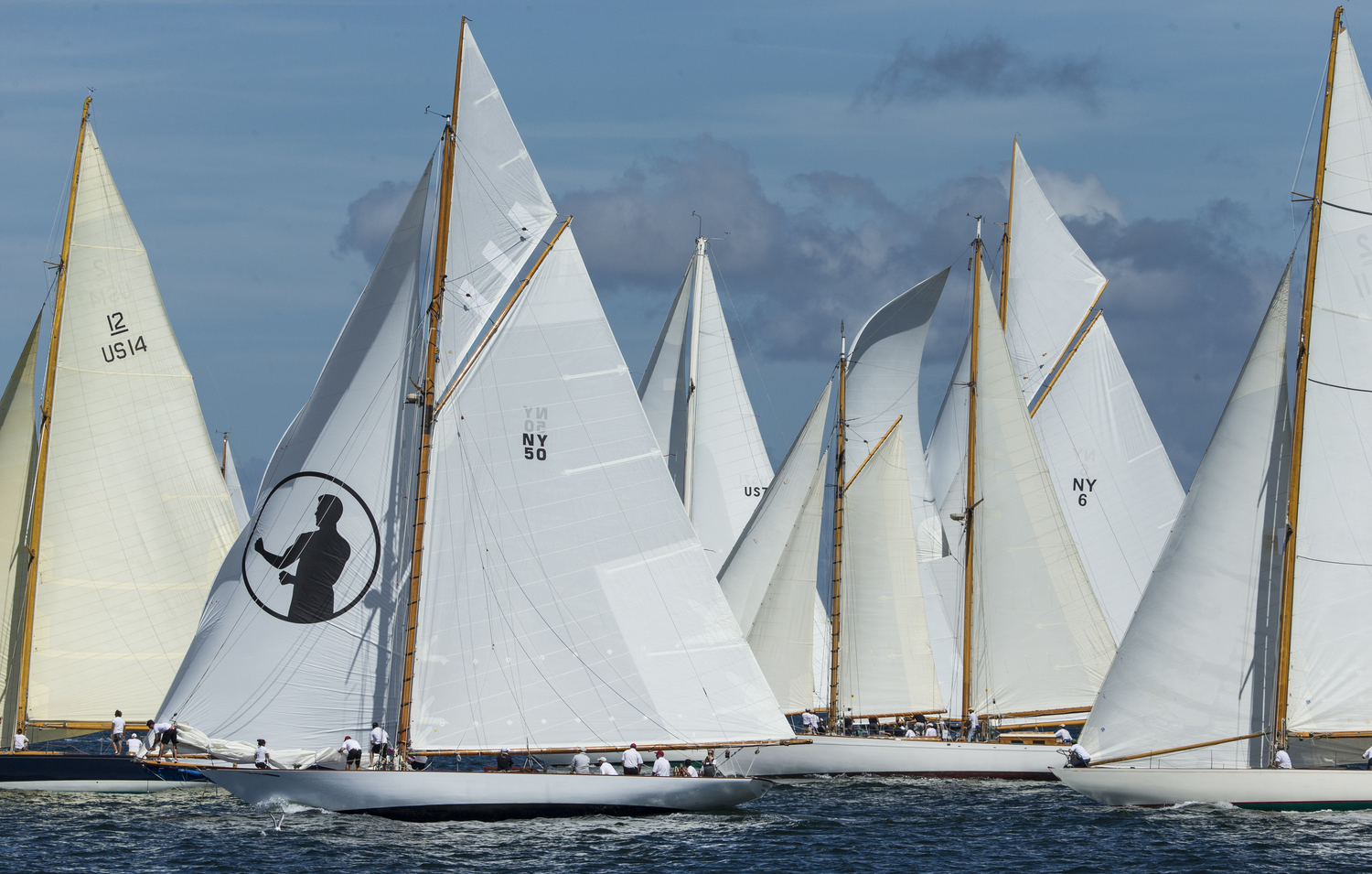 The NY40 class boats were raced by club members for a number of years but that was ultimately interrupted by the outbreak of WWI.   By the time racing was resumed, the boats were sold as their owners moved on to more modern designs.

Only four of these iconic yachts have survived and live on with owners who have  pockets deep enough to keep these beautiful classics in prime condition, no simple feat.

Marilee is one of these lucky yachts, perhaps the finest of her class in existence, and reentered my world, yet again, when I viewed a documentary film that chronicles her history and most recent restoration.

Those who follow this blog know that I make it a point to find my way aboard as many classic yachts as I can and while I have never been aboard Marilee, she has been in my mind as a very special yacht since our days of sailing our own “classic” Tao.

It wasn’t until the early 80s, around the time that John Wilson “launched” Wooden Boat Magazine, and, in part, catalyzed what has become a wave of restorations of many of the remaining classics worth preserving, like Marilee that she was brought back from near death.

She underwent her first major restoration in 2000, funded by a small group of New York Yacht Club members, including Peter Kellog, in preparation for the America’s Cup Jubilee in Cowes England.  She did well and won many races during that series.

Fast forward to this morning when I saw that wonderful video chronicling her most  recent restoration.    Yes, I know that most restoration videos, a sort of “we replaced 40% of her frames…” type can be boring, but this video is particularly well done and includes fascinating historical information along with some details of her restoration.  You should watch it.So, there you have it, a boat that I have never been aboard an yet still somehow feels like she has been a part of our lives for years.

These chance encounters with Marilee are a lot like the cruising lifestyle, where friends come and go with the seasons.   And while it may be months or years between those chance encounters, seeing them again brings back a wave of memories as we say “hello” yet again.

For me, Marilee is one of those memories of times past.  Our children are grown and have kids of their own and it’s nice to know that Marilee, that we first saw when we were newly married, is still out there and has a caring owner who is willing and able to put resources into keeping her in the condition she deserves.

I wonder when I’ll next “see” her again?  Time will tell…

One response to “The classic yacht, Marilee reenters our lives.”