>McGlathery Island Maine, just off of Stonington. A favorite place.

>One of my favorite places to visit in Maine is the island of McGlathery, located just under three miles south east of Stonington Maine.  Brenda and I have been visiting the island for nearly 20 years as we have explored many spots along the Maine coast.

Stonington and McGlathery are both located in Merchant Row, a collection of islands that were once a hotbed of granite quarries that were teeming with commerce prior to the introduction of concrete as a preferred building material.

While there are a number of sheltered anchorages in the area, McGlathery is one of my favorite because there is a cove on the northeast side of the island and a gently sloping beach that’s easy to land on.   This satellite photo of the island clearly shows the cove on the north east side and it’s well protected from the prevailing winds as well due to the tall pine trees covering the island.   The island is owned and managed by the Island Heritage Trust, a group that’s dedicated to preserving islands like McGlathery for all to enjoy.  The island is also a popular spot to visit with sea kayakers and is highly recommended by www.paddletrips.net.  Here’s a link to the specific part of their site about the island and features a good map of the area.

Even though this photo was taken nearly 100 years ago, Stonington doesn’t look a lot different now than it did then.  However, there are a lot more boats in the harbor and they are nearly all lobster boats.   This link gives an interesting history of the area. 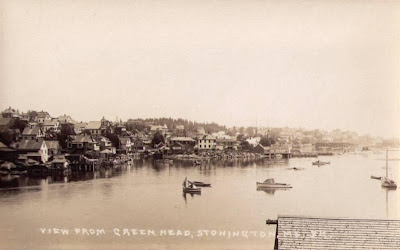 Nearby is also Crotch Island, named because of a slot in the middle of the island that makes it look like a pair of short pants. It is the only currently active quarry in the area and has supplied granite to many notable sites in the US.  In particular, it’s stone has been used in the George Washington Bridge, Kennedy memorial in Arlington as well as a recent installation in the New Yankee Stadium.  This is an interesting article about Yankee Stadium and Crotch Island’s involvement.   As I look at this photo of Stonington above I believe that it was taken from Crotch Island itself.

3 responses to “>McGlathery Island Maine, just off of Stonington. A favorite place.”