So Bob, how was your trip?

I am always a bit remiss when I arrive home after a winter afloat as it seems to take forever to find a moment to do that” one last post” about the trip.  Anyone who has followed our run must wonder if we made it as I go silent after near-daily posts when we are on passage.  Well, we made it and here’s yet another post that proves that I am indeed “here to tell the tale”.

On Tuesday we cleared customs in New London after several conversations with officers on the phone who were universally insistent that we show up in person for an inspection.  As a point of clarification, I didn’t object to an in-person inspection and even asked for clarification and asked what was “not allowed” so that I could dispose of everything before making landfall.

The items that had to go over the side were any fresh fruit or produce as well as any chicken products including frozen items that were not labeled from the US.  So, over the side they went as we passed Montauk.  Anyone watching would have seen a mile long slick of limes, celery, apples and even an errant turkey thigh bobbing in our wake.  Here fishy, fishy…

We tied up at the Customs Dock in New London and a short time later the officer arrived.  It’s a big dock and the step from the dock to Pandora’s deck was a pretty good drop.  After taking one look at the dock and then down to Pandora the officer said, and I quote “that’s a big step”.   And I said “yes, that’s a big step.  Would you like to come aboard?”  Hoping that he wouldn’t given the large variety of rum that I was “importing”.   After a long moment of hesitation, he said, “Hmm… please pass up your passports” and “do you have any fruits, vegetables or chicken aboard”.  To that I said, “nope, tossed everything overboard and there is a trail of the stuff looping around Montauk point.”  And, he said, “welcome home.  You’re all set.”   And, I said “that’s it?” and he said.  “Yup”.

Now, wasn’t that easy?  So, there we were, back in US waters and free to go on our way.  Bob jumped ship to catch a train home but not until we had a “Tot of rum” to celebrate our arrival.  George and I headed toward the CT River and the Essex Yacht Club, the official landfall for our journey.

The fog was really thick as we approached Montauk earlier that morning with visibility of only a few hundred feet.  After months of clear warm weather in the Caribbean it was a shock to suddenly be in damp, cold fog. 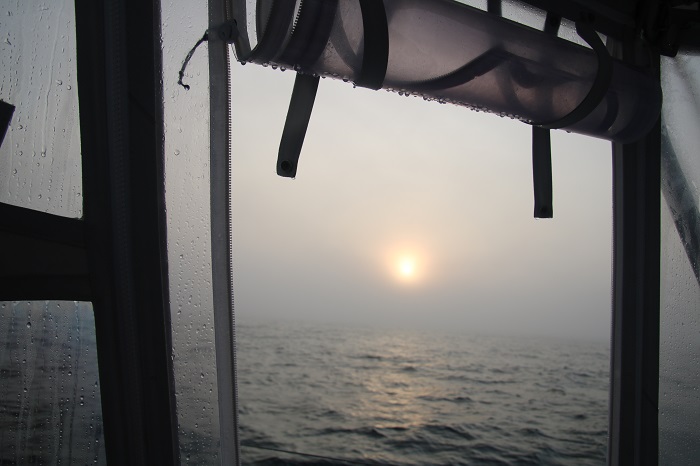 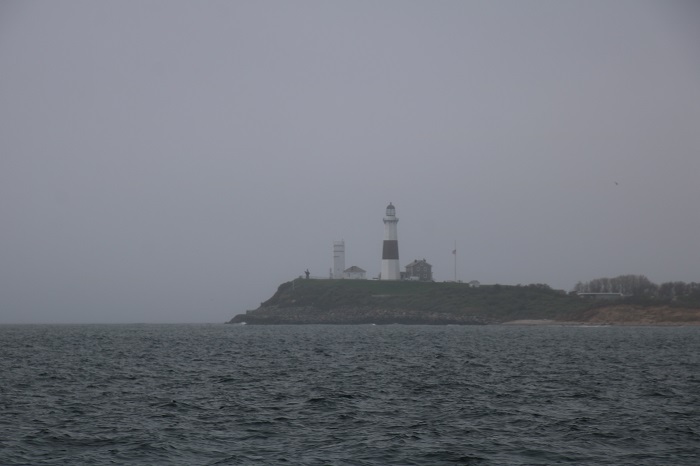 Visibility was closing in by the mile. 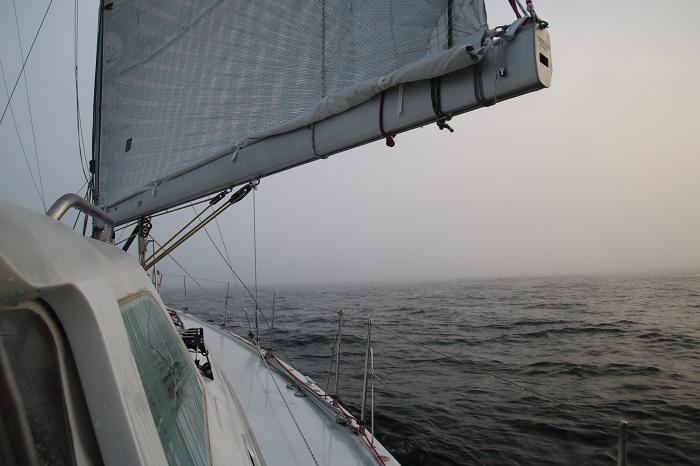 The closer to shore we got the thicker the fog.   The Orient Point ferry emerged ominously from the low hanging fog bank off of New London. 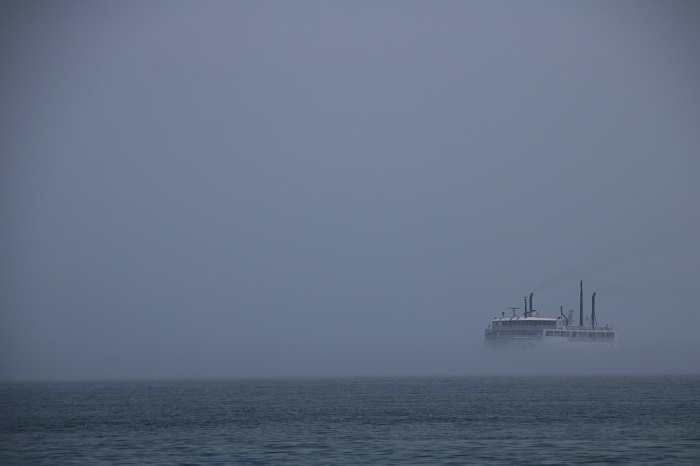 Nearly there, the mouth of the CT River. 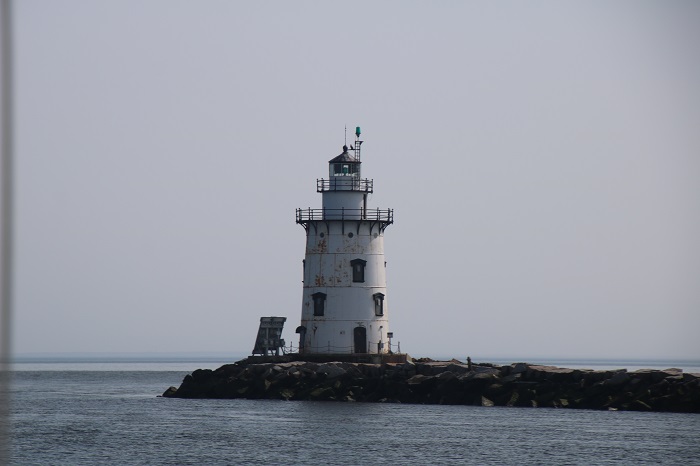 The last time I passed this point was the third week of October, last year. 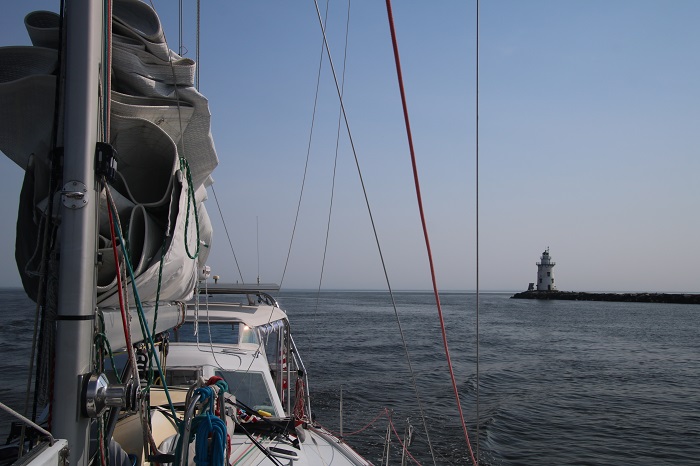 After nearly 4,000 miles under Pandora’s keel since passing this point last fall and 9 days since leaving Antigua, we were home and none the worse for wear.

Actually, I was a little worse for wear after my trip up the mast way back, 600 miles south of Bermuda when the headboard gave way and the mainsail came crashing down onto the deck.

But then you already know all about that if you follow this blog as I wrote about that experience in an earlier post.   I won’t bore you with a replay except to show some photos which I wasn’t able to send from Pandora given our limited “bandwidth” while underway. 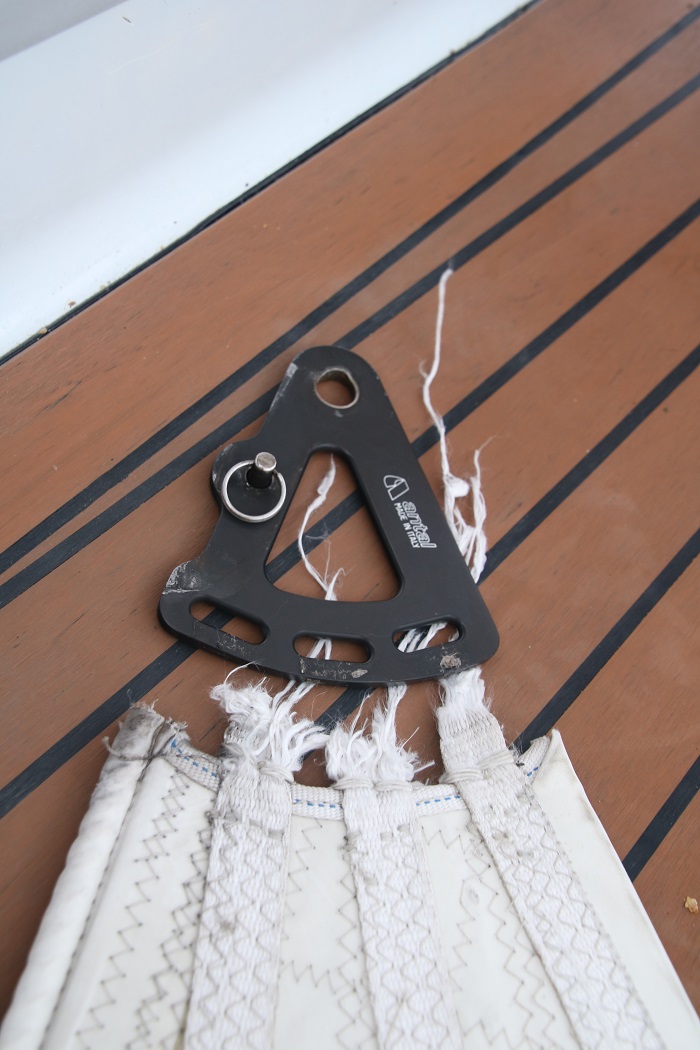 We pulled the top of the sail through the front of the dodger so we could work on it under cover. 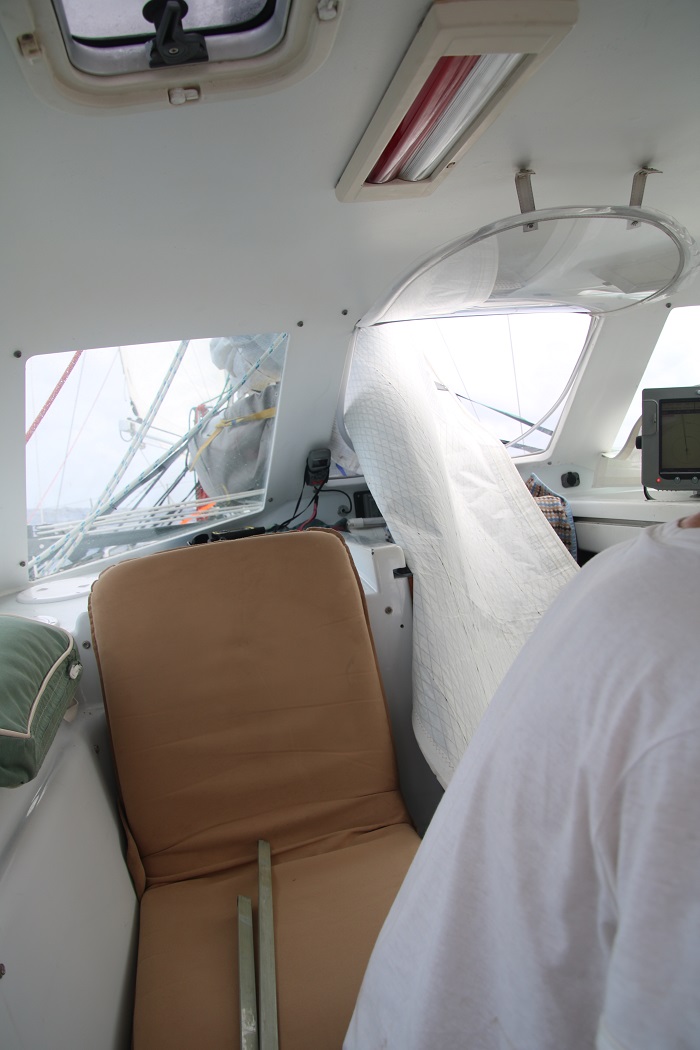 After a lot of discussion on what the best fix would be, we decided to drill holes in the sail and thread lengths of super-strong Dynema rope to support it.  Good thing I have a large tool and spare parts selection aboard. 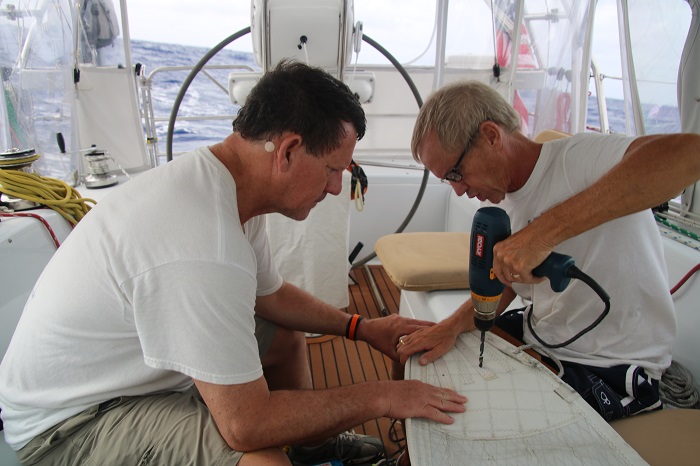 Several hours, nine holes and a bunch of knots later… 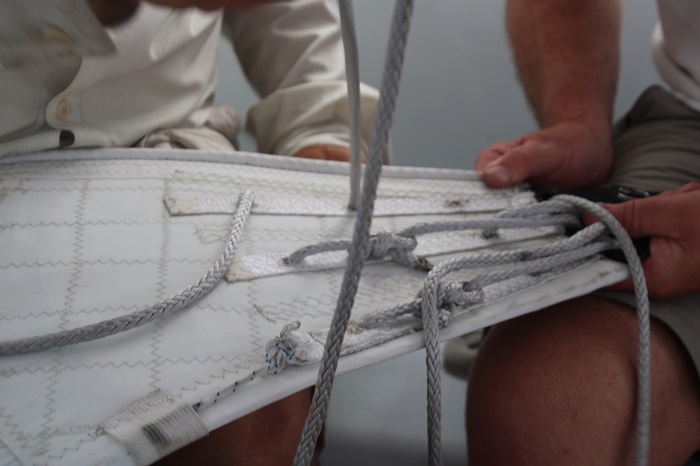 All done.  Not beautiful but plenty strong. 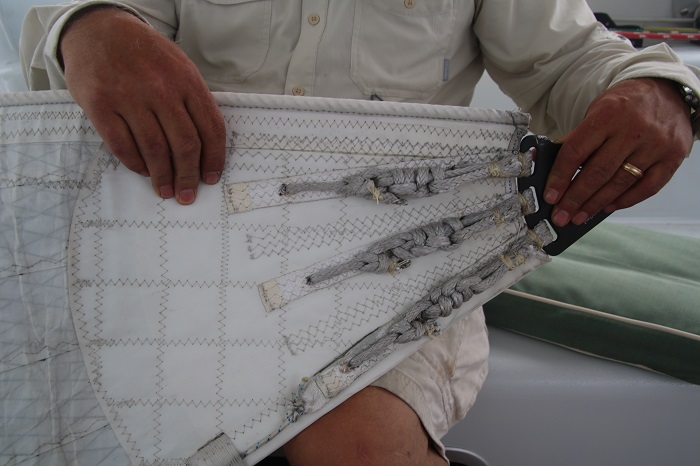 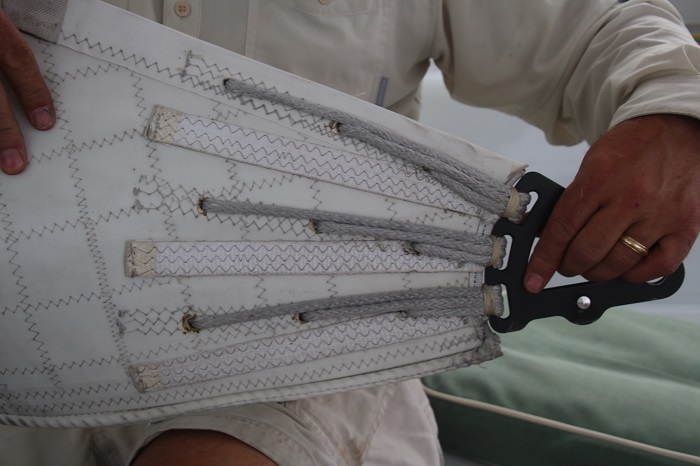 George and Bob put the sail back into the mast slides as I was still feeling a bit shaky from my run up the mast. 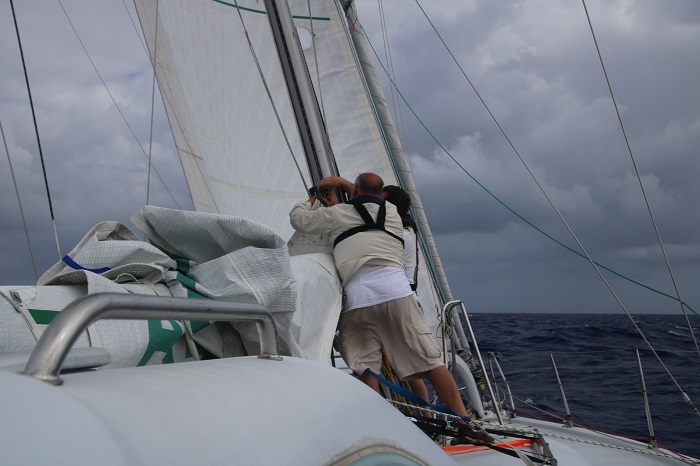 And, speaking of my time “aloft”, I had a few bruises to prove that it was a rough ride.  This one was particularly tender.  Not sure what I banged into but I thought that it was pretty impressive. 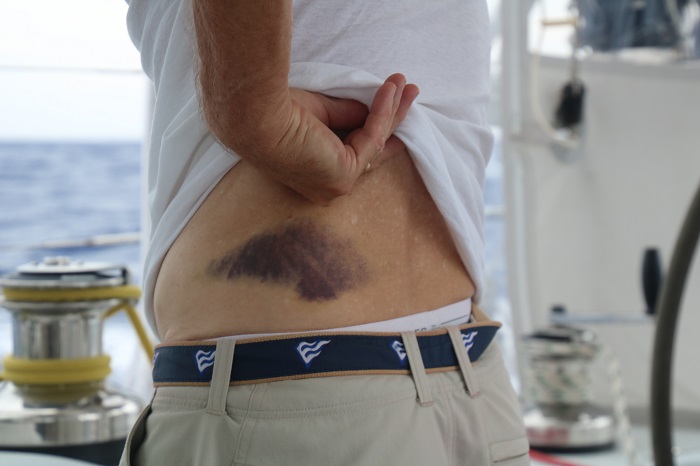 The inside of both thighs from clinging to the mast.   “Thanks for sharing Bob! Disgusting, really!” 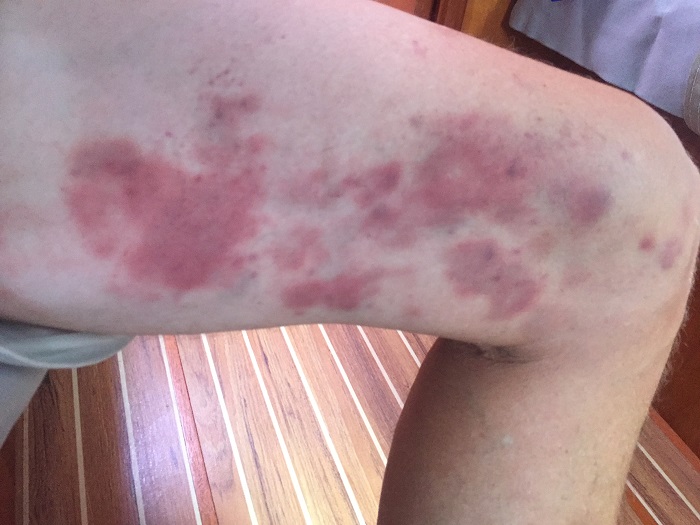 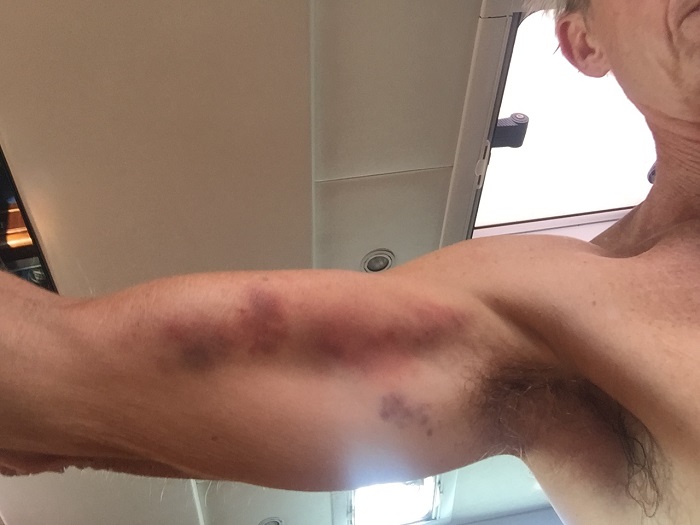 As rough as it was the day I went up the mast, a few days later, not so rough.  Once you get north of Bermuda the winds are all over the place if there is any wind at all. 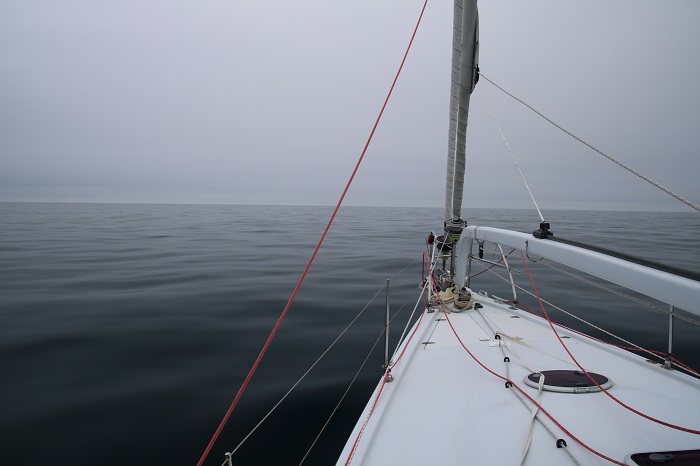 We ended up motoring something like 100 hours and yet still managed to sail between 800 and 900 miles and sometimes at near double digit speeds for days at a time.  I wrote about one of our best days of sailing, early in our trip in this post.

However, after crossing the Gulf Stream the wind just died and didn’t come up again.

As much as I hate motoring day after day, the calm seas that come along with no wind do make for good conditions to spot sea life.  We saw a small pod of humpback whales and also many of these sharks, Basking sharks I think.    The fin, tail and “nose” of the shark are very distinctive as they slowly swim along with their enormous mouth agape.   These sharks run in the 15-25′ long, the second largest shark species.  In spite of their enormous size, their primary food is plankton, tiny invertebrates.   We saw dozens as we approached the continental shelf about 100 miles south of Montauk. 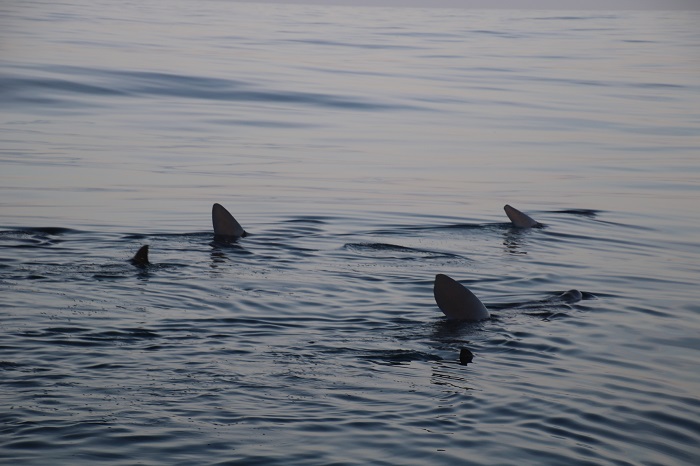 One of them slowly swam toward Pandora until he/she was only about 2′ from our hull and suddenly realized how close we were.  And with a violent splash, turned away.  They really look primeval. 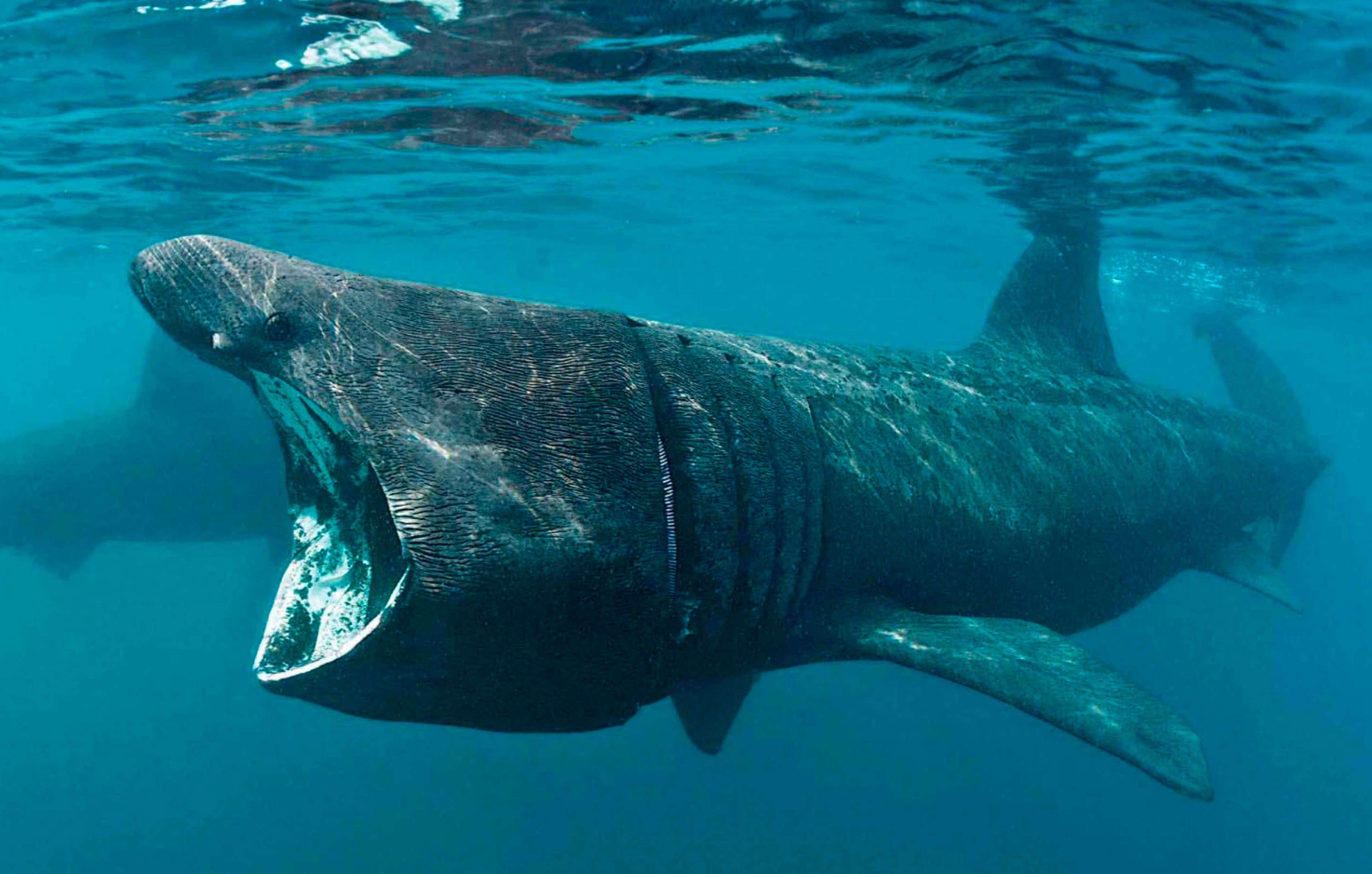 Now that Pandora is in a marina, I’ll have the mechanic take a look at the prop shaft bearing to see how tough it will be to put in a new one or at least fix the one that’s there.   I may also have the transmission pulled for inspection as I fear that the vibration might have caused some excess wear.   I’ll wait until fall to pull her, I hope, to take a look at the cutlass bearing on the shaft to see if that wore too.

You know, they say that cruising is “boat repair in exotic places” but being home means even more boat repairs, but in a marina.  And, it costs a lot more. funny thing.

So, how was my trip?  Well, I am already thinking about my run south in November as part of the Salty Dawg Rally to Antigua.

Who knew?  But I didn’t want to schlep Pandora all the way to Hampton.  A rally departure from my very own home-town club?  I’m excited.