You never know where things will lead. To Ashanti…

One of the best parts of being here in Antigua during the Classic Yacht Regatta is seeing the remarkable boats that congregate from all over.

About a year ago, I wrote about a group, the Royal Navy Tot Club of Antigua and Barbuda, a group that meets every evening to carry on the discontinued tradition of issuing rum to members of the British Navy, sadly stopped in 1970.    I wrote about this group in a post last spring when I first became familiar with them.

Anyway, fast forward a year and I am in the process of trying to become a member.  This involves drinking “tots” for a number of nights, 7 actually, and passing a rigorous oral exam on British maritime history.    This is tougher than it sounds, both the drinking and remembering, and I have to admit that I am stressing over the test which I have to take in the next few days.  Just how many ships went at it in the Battle of the Nile?  What’s important about the Battle of Copenhagen?   Inquiring minds have to know to be a member and that’s just the beginning.

One of the most fascinating aspects of cruising and visiting islands like Antigua is that I am able to meet some really interesting people.   Case and point.  One of the most magnificent yachts that competed in the Classic Yacht Regatta last week was Aschanti, a wonderful schooner that was built in 1954, one year before I was “launched”.   Not that old, right?  However, I have to say that she’s in somewhat better shape.   Funny but I can’t recall being described as a “classic”. 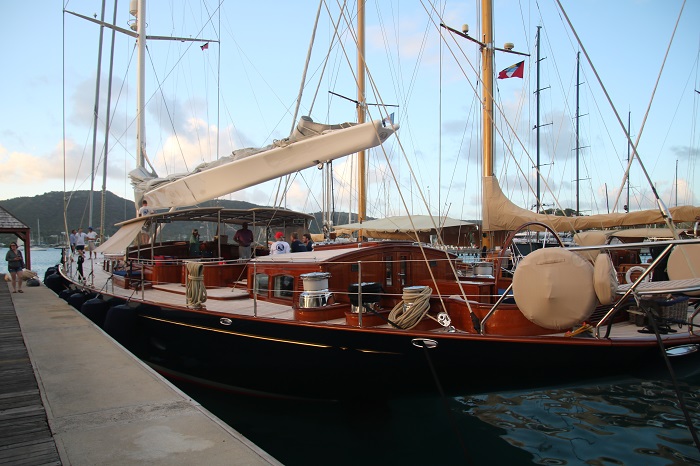 The connection is that her owner, a very nice guy, was also working on membership to the Tot club.   It seems that he decided to host one of the evening meetings of the Club aboard Ashanti.  It was a wonderful event and very well attended, as you might imagine.    The club organizers set up shop in the cockpit. 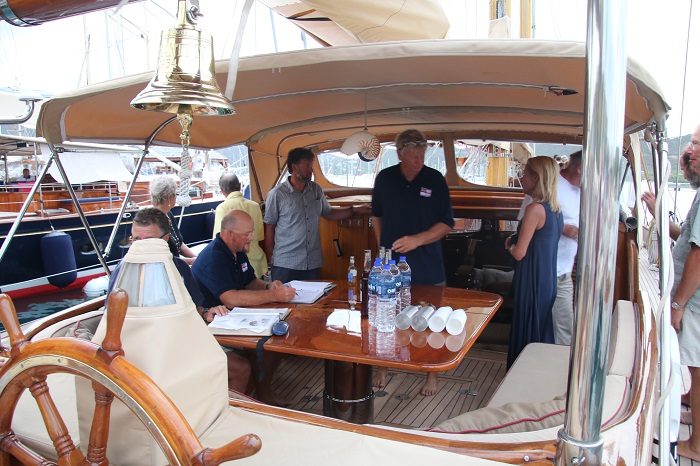 She’s a big boat so there was plenty of room to hang out.   Love the kiddy pool bar. 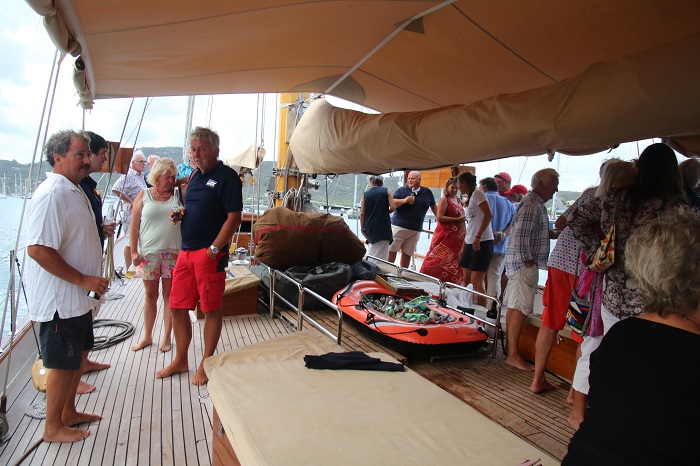 She’s a real stunner down below.   Forgive me for trespassing.  I also heard that she has an awesome bathtub.  Oh well, I didn’t see that as even I am not that bold.   “can I peek into your bathroom”?  Yeah, right Bob… 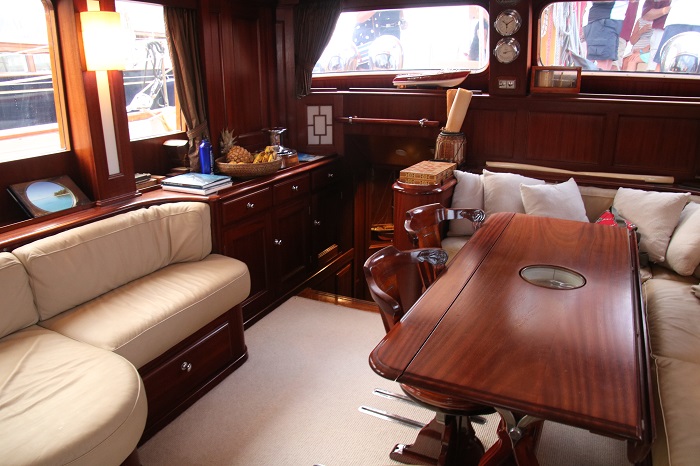 Acres of varnish and it’s all perfect.  I wonder how often they have to pull the spars and varnish them?  I wonder if they varnish them in place?  What a job that must be. 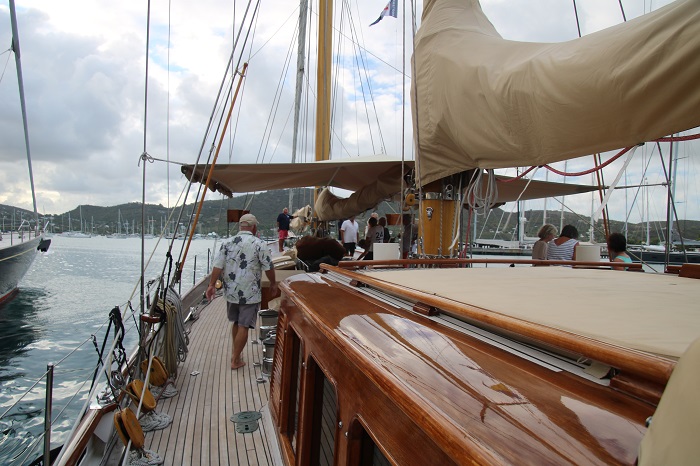 I had to ask what this device near the helm was for.  It turns out it was used to display the course that the helmsman is to hold.   the pegs are removed and set in place to display the course.  Pretty neat.  In the day of autopilot I guess it’s not as vital, perhaps.   A lovely artifact of a different time. 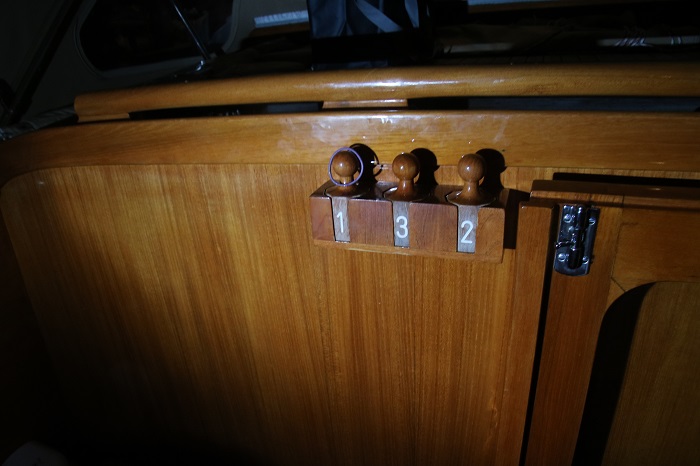 And speaking of holding a course, they are headed toward the Panama Canal across the Pacific and expect to complete a circumnavigation.  And, that’s in addition to a fascinating “figure eight run” that they made.   That’s a cruise rounding both north and South America as well as passing through the Panama Canal, twice.  Sounds awesome.   I wonder if they ever need relief crew?  I would be TOTALLY available.

I’ll bet that Ashanti spends much of her time at sea under sail.  So many megayachts motor from place to place, only putting up the sails when they are on charter or when the owner is aboard.  It seems that Ashanti isn’t like that.  She’s a boat that sails well and sail she does.

The owner told me that “Ashanti picked me, I didn’t pick her.”  When you are talking about a boat with this sort of pedigree that’s probably the way it happens.  It seems that she picked well as this chapter of her life seems to be working out very well for her.

As an interesting note, I had forgotten that I had seen Ashanti when I spied her in Le Marin, Martinique earlier in the season and discovered a video of her recent Atlantic crossing.  It’s really well done and worth a look.Yes, it is indeed a small world and you never know where things will lead.  I never imagined, when I gazed longingly at her in Le Marin that I’d soon be aboard and meet her owner here in Antigua thanks to the Royal Navy Tot Club.

Ashanti is headed to the Panama Canal soon so I guess our paths won’t cross again for some time.   However, if history is any guide, the answer might surprise…