Yes, yes, I know, it’s been a long time since my last post.   Nine days actually but I have been busy getting from point A to point B.    But now I am here, Antigua that is.

Brenda flew out of St Lucia and Craig joined me for a 200 mile run with lots of stops over nearly 10 days and flew out on Sunday.  The sailing was fabulous and true to form, we were on a starboard tack for the entire time.   Have I mentioned that the wind is ALWAYS, well nearly always, out of the east?

A few of the days were pretty “sporty” and some of the anchorages were, shall we say, a bit rolly, but that goes with the territory.   Yes, Brenda, I know that that fits under the “not your favorite” category.   But hey, we visited some neat places this season, Pandora goes plenty fast and we get there fairly quickly.  Right?

I should mention that one of the reasons that I have been “internet deprived” is because my cell phone got wet.  Not very wet but wet enough and now it’s not much more than a paperweight.  How did it happen, you might wonder?  To find out, you’ll just have to stay tuned as I can’t get into that just now.   Oh yeah, in keeping with the “bad things come in threes” along with my cell phone turning into a paperweight, I also lost my prescription reading, computer screen viewing and seeing-things-far-away glasses and someone swiped my American ensign and flag staff.

So, the point of all this is that I have been pretty distracted and, “technologically challenged” and thus way behind on posts.   Not to worry as so much has happened that I have plenty of material to work with so keep that browser pointed toward Sailpandora.

While plenty has happened between then and now, I’ll jump right into the Classic Yacht Regatta here in Antigua that just wrapped up last evening with lots of awards and fun.   Perhaps a shot of the stage with all the “silver” isn’t that exciting a way to begin but here goes. 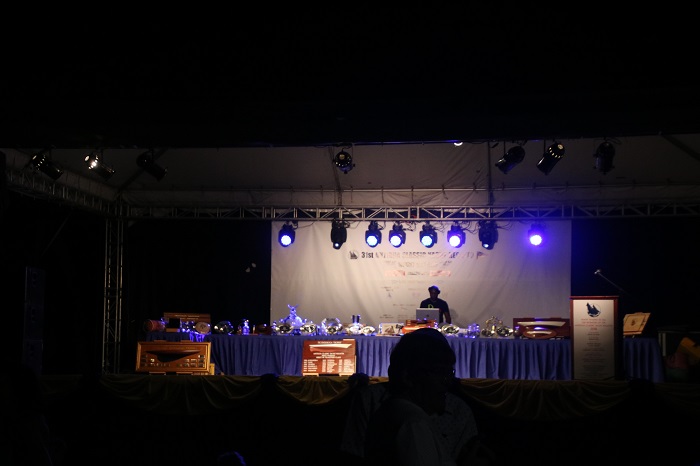 It was a beautiful evening with classic yachts providing the perfect backdrop. 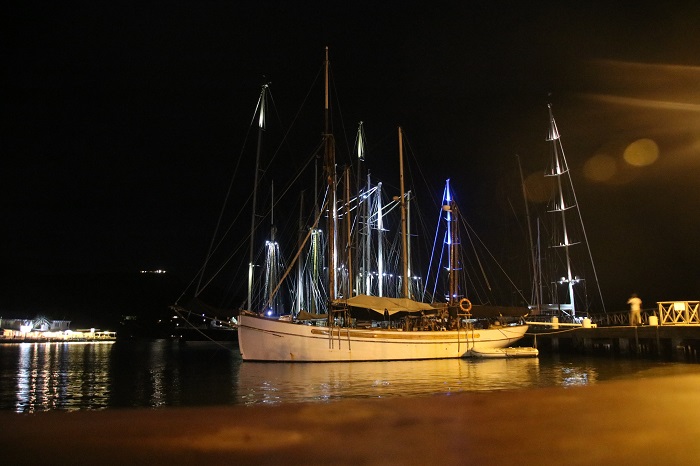 Every April, as the season winds down, beautiful yachts from all over the world converge on Antigua to spend a week racing together.  It’s a remarkable sight, with some of the most iconic yachts afloat today battling it out, although in the most civilized way, of course.    To see the big girls blasting toward the finish line was quite a sight.  This is Columbia a replica of a cod fishing schooner by the same name.  She’s beautiful, and powerful. 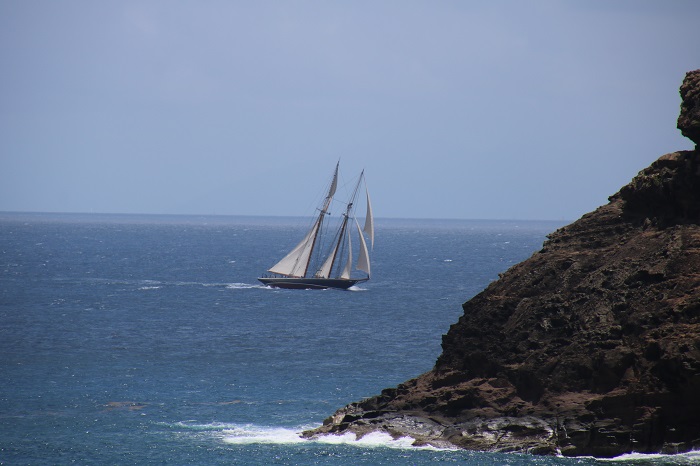 Right behind her Aschanti.  She’s almost as old as I am, but not quite. 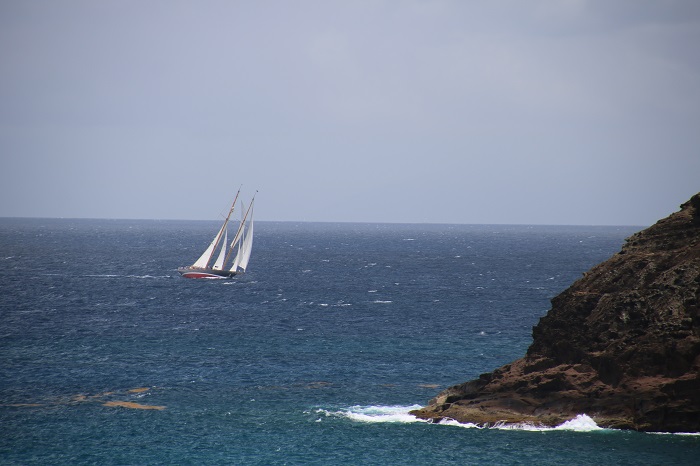 Although I did not sail in the races aboard one of these beauties, I spent lots of time hanging around the docks, parties and enjoyed watching them as they made their way home after the races.   And, there were lots of parties. 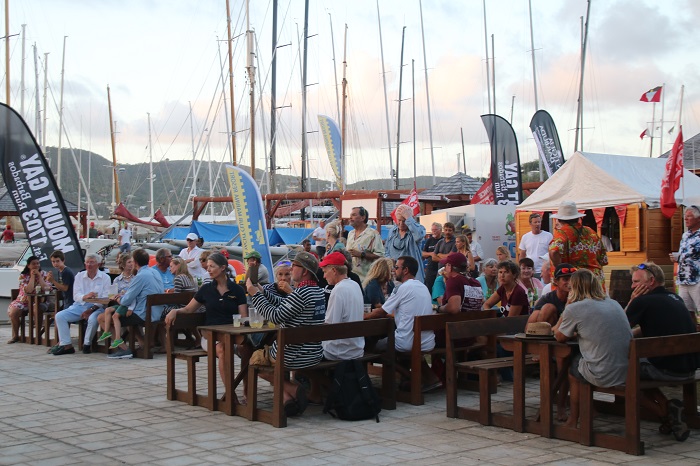 Mount Gay Rum provided free Dark and Stormy drinks for all.  Later in the evening some of the crews competed in a sea shanty sing-off. 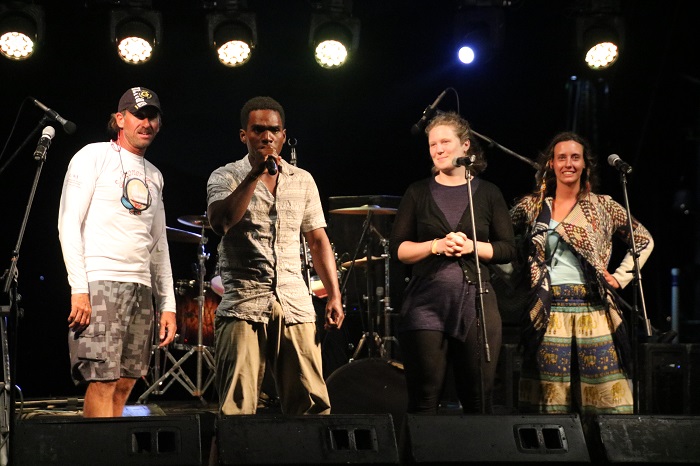 Each act was terrific and in the end everyone got a prize, a jumbo bottle of Mount Gay. 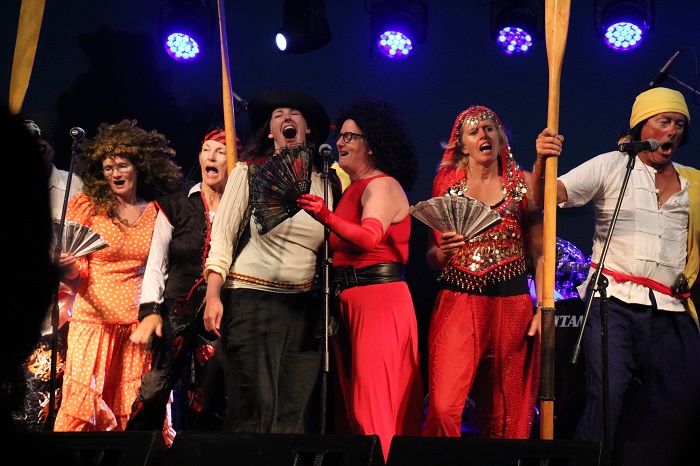 Of particular note was this little girl who played with her parents on her fiddle.  They are getting her off to a good start.  No stage fright for her.   I wonder if her parents shared their rum with her.  Perhaps not. 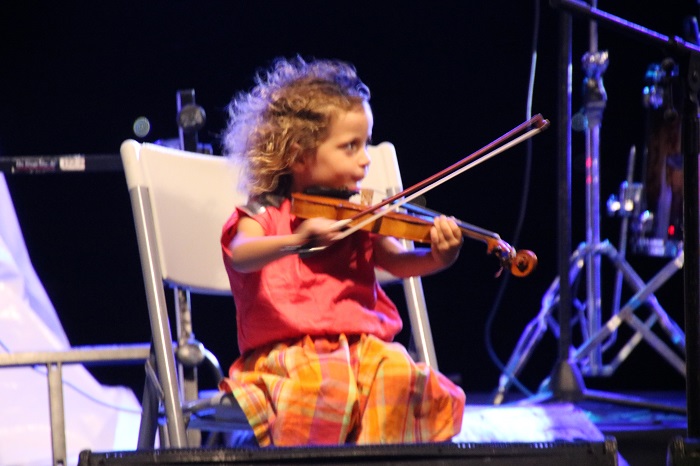 However, for those of us that were unable to find our way aboard one of these beauties, perhaps the highlight was the parade of sail into English Harbor.  To watch these magnificent machines make their way to the finish line was a spectacular sight to behold.

After finishing off of Falmouth, each boat came around the point and paraded into the Dockyard.  One by one they entered, careful to avoid collisions in the narrow cut.  The first to finish, Columbia led the way.   She’s a spectacular yacht and only a few years old. 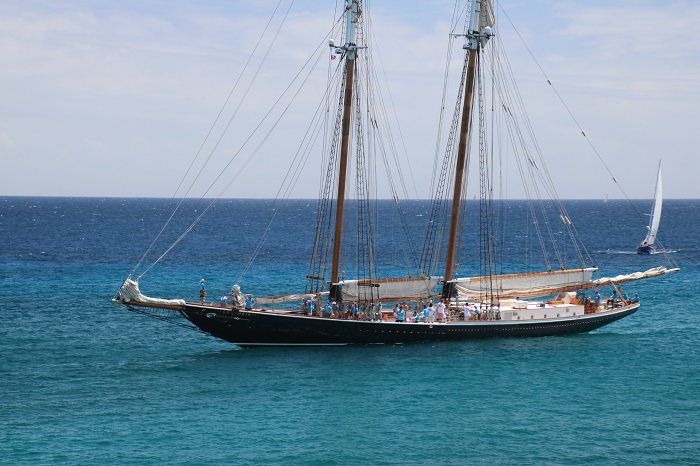 She’s quite a boat. 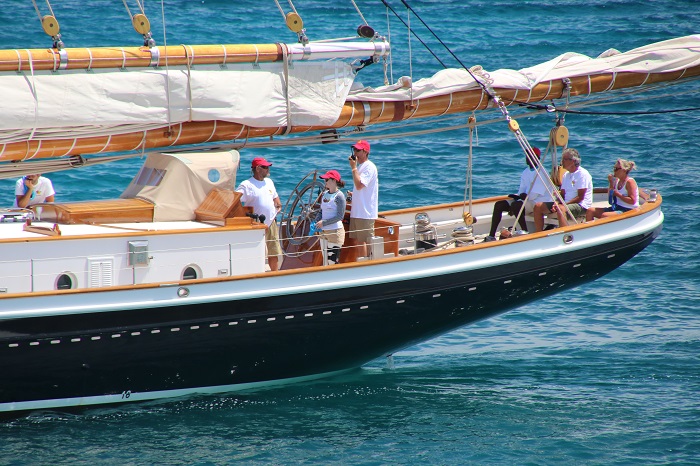 If two shots of her are good, three are even better. 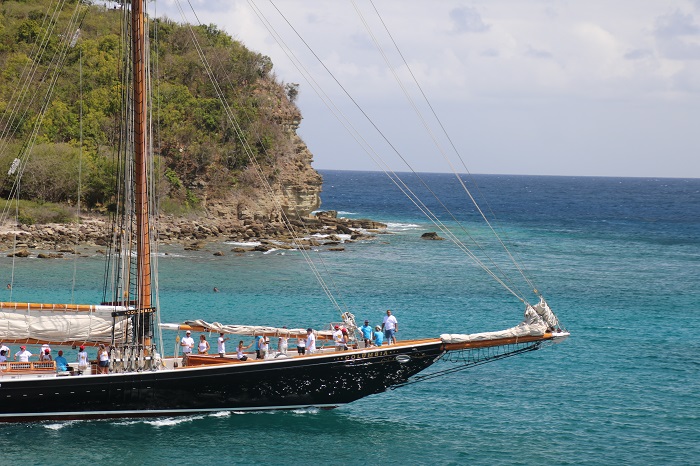 The other evening I was lucky enough to be invited to join a party aboard this beauty, Aschanti.  She was built in 1954 and is still in perfect shape.   Her current owner purchased her a few years ago.  He told me that she’s headed to the Panama Canal as she makes her way on an around the world cruise.   I’ll share more about her soon.  She’s beautiful. 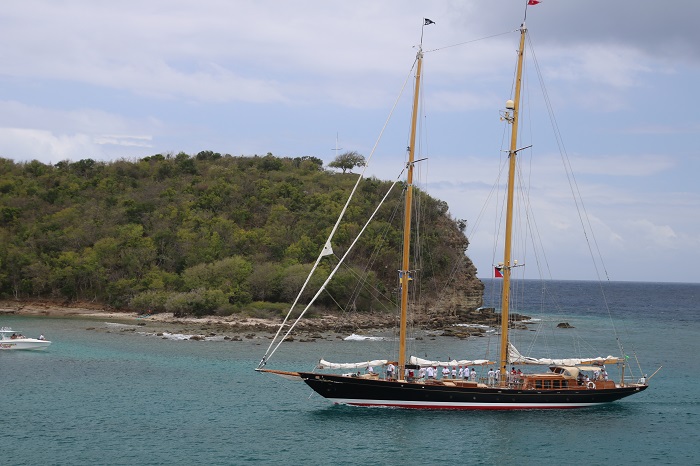 The crew lined up on the rail.  Quite a sight. 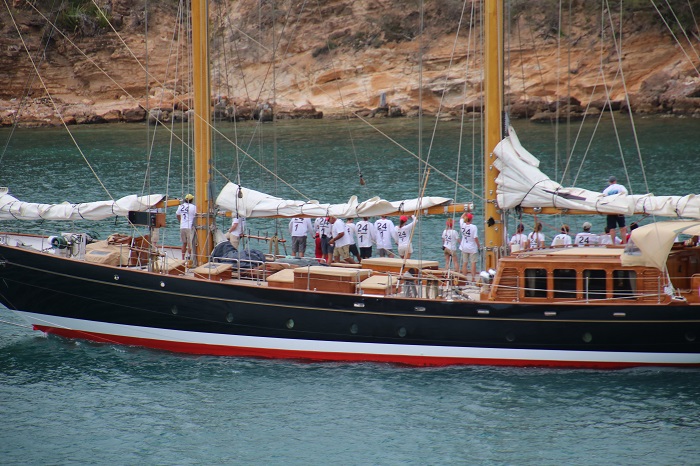 The mighty TI, Ticonderoga, is always a standout.  She flanked three Carricou sloops on her way into the harbor. Built in Bristol RI in 1936 she is in better than new condition after all these years.  I  was lucky enough to sail aboard her many years ago when she was in Stamford and I just happened to be “at the right place, at the right time”. 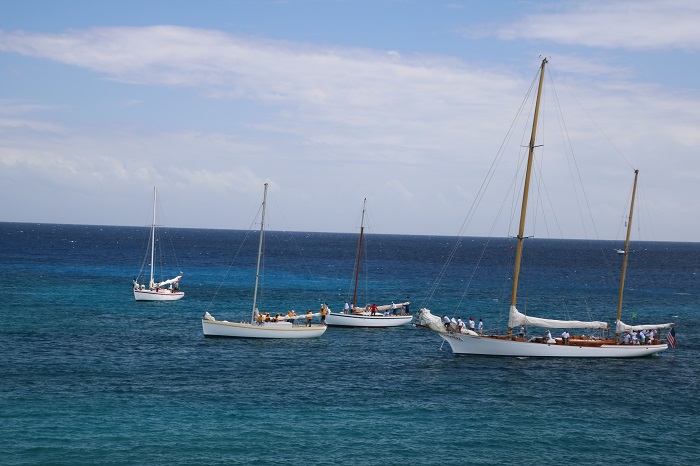 Carricou sloops are widely raced in the Windward islands and the fleet was well represented for the series.   They impressed the crowd with their enthusiastic crews. 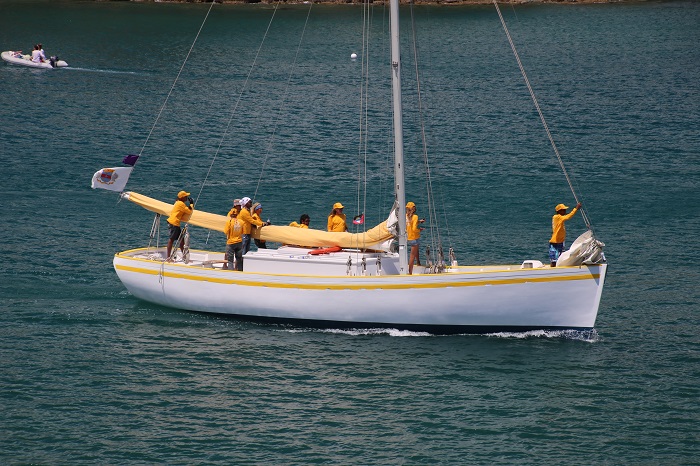 One after another, fabulous yachts entered the harbor after a hard day or racing.  Mah Jong, which I wrote about when we saw her in Bequia is quite a boat. 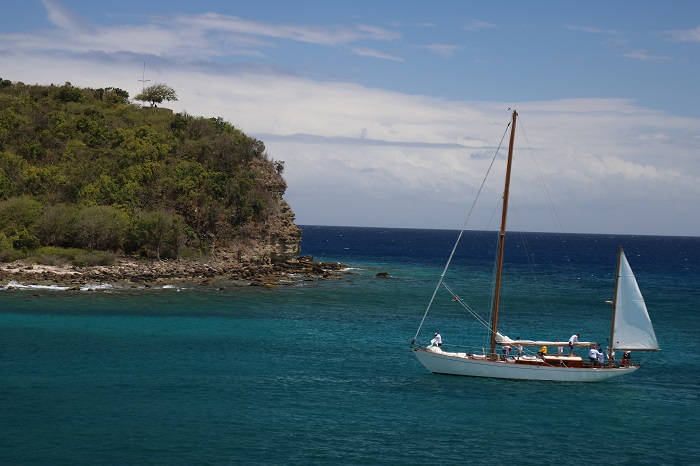 Perhaps this one displayed the spirit and enthusiasm of the day best with three huge Antigua flags flying in the fresh breeze. 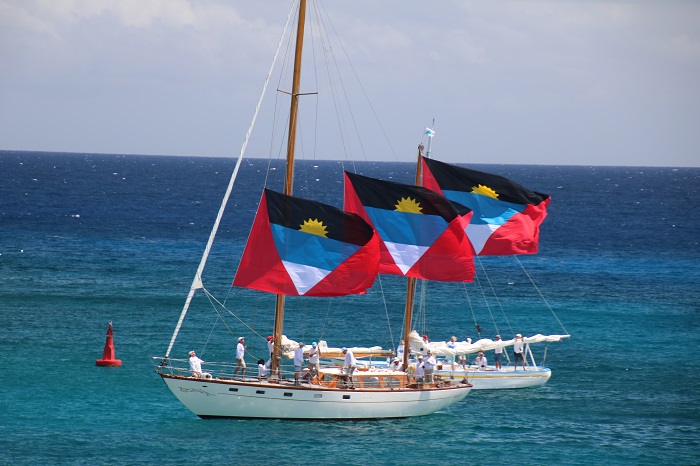 There were plenty of impressive moments but Mah Jong and this “dancer” doing her routine in the rigging was something to see. 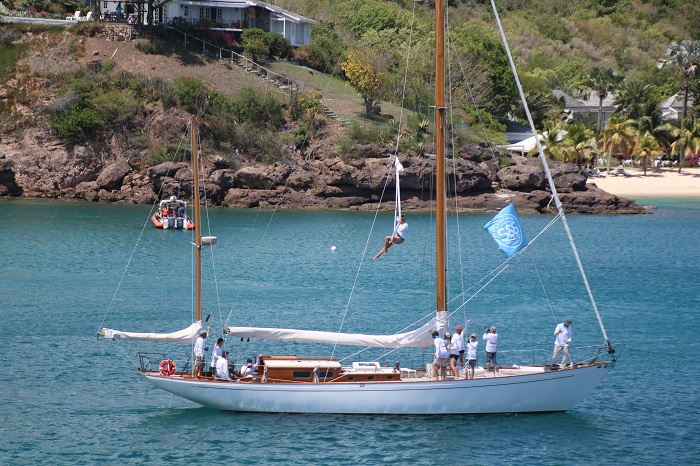 I wonder about the wisdom of hanging from a “scarf” over a hard deck.    I’ll bet she was pretty daring in her youth.  Wait, she still is. 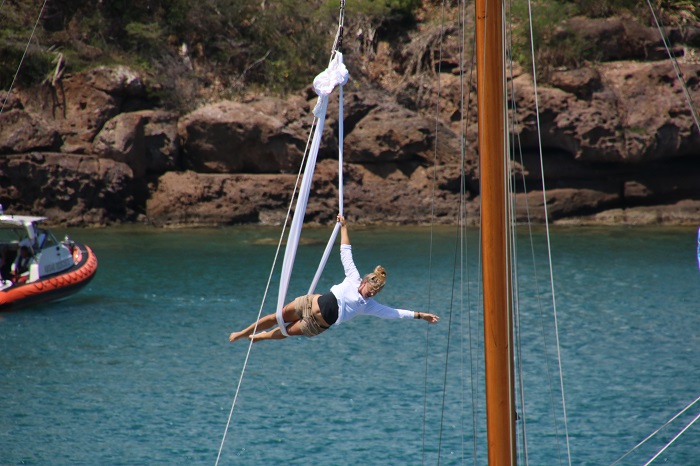 While I am sorry that Brenda isn’t here with me and am totally bummed that my cell phone is mort, it’s been great to be here in Antigua for such a spectacular event.

In a few days the “go fast” modern racers arrive for a week of racing so it will be interesting to see what that’s like.  After that, my crew arrives for the run to Bermuda.

One thing for sure is that I have a lot of catching up to do to get Pandora ready and provisioned for the trip north and there’s lots of posts just waiting to be written.

I can say with certainty that it’s been truly classic to be here for all the fun.