>Of all the harbors that I have visited in Maine, one of my favorite is Damarascove Island.  Just 5 miles south from Booth Bay Harbor.  The island is largely uninhabited and owned by the Boothbay Region Land Trust.   The only private residence on the island is the old coastguard life station located just inside of the mouth of the harbor.   There’s also a small cottage manned by a caretaker in the inner harbor that keeps watch on the island and visitors.  There’s also several floats moored in the inner harbor where local fishermen keep their extra lobster traps. 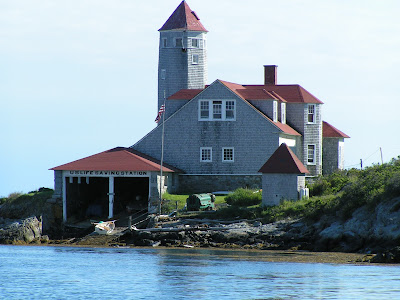 The coastguard station, located on the western point of the harbor mouth is really a wonderful structure and has been restored by it’s private owners.

The harbor is extremely narrow and opens to the south.  This would suggest that the harbor would be rough but that’s not the case as the very narrow entrance, which looks more narrow when you approach compared to this photo, is protected by rock ledges on both sides.   This shot of the island from the air shows the harbor on the lower left with the Coast Guard station to port as you enter from the south. 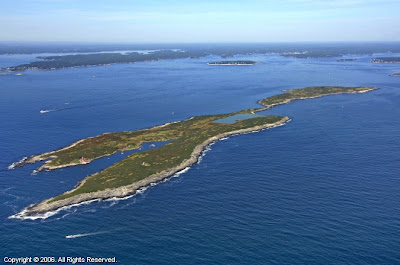 As the harbor narrows toward the center of the island, there are a few moorings that you can pick up.  It’s really narrow and Pandora at 46′ overall nearly touches the shore when she swings.  For this reason, I pick up a second mooring to keep her in the center of the channel.  The moorings are located at the very narrowest part just before it opens up toward the most inner portion of the harbor.  This shot is of my last boat Elektra was taken a few years ago on a mooring in the inner harbor.  You can really see just how small the harbor is. 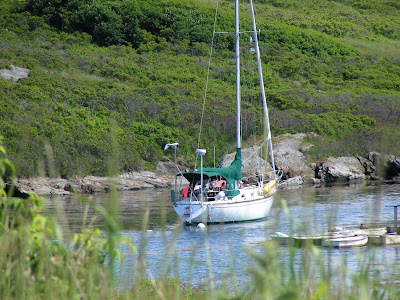 To the right of the photo is a public landing that’s used by visitors as a place to put your dinghy while going ashore.   There’s also a wonderful little one room museum overlooking the harbor that has interesting artifacts from the island’s history. 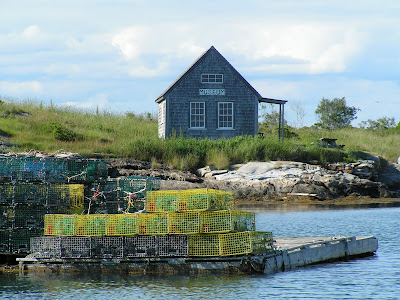 There are well groomed trails that run all the way from the harbor to the most northern point of the island but some areas are closed off during nesting season so as to provide for more privacy for visiting common Eider ducks.

This is yet another shot of Elektra that I took a while back in the inner harbor and it gives you a great feel for just how isolated the harbor and island really are.  The light this day was particularly dramatic due to a passing thunder storm. 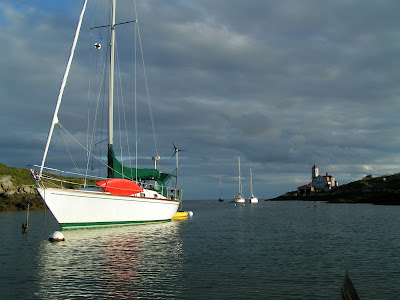 Notice that there are only a few other boats anchored in the outer harbor, still protected from the waves in normal settled summer weather.   If you go there on a weekend expect to see a good number of day trippers.  However, on the weekends you can have the place to yourself.  Besides, if you arrive and it’s too crowded, it’s only a short distance to Booth Bay Harbor.

While Damarascove Island looks a bit intimidating on the chart, if you are looking for a bit of a challenge and are comfortable maneuvering your boat in tight quarters, I encourage you to visit this little gem, located just 5 miles off of the coast from Booth Bay Harbor Maine.  For more information about this and other great places to visit in Maine, the best book around for such information is the Taft Cruising Guide to the Maine Coast, available at many locations including Landfall Navigation.

Have you visited a harbor in Maine that you particularly like?  I’d be interested in knowing what you think.  Some have told me that they have had difficulty in posting a comment on my blog.  Please try it and let me know if you have difficulty.  I can also be reached at robertosbornjr@gmail.com

One response to “>Damarascove Island Maine, near Boothbay Harbor”