Starboard tack from now on.

Well, that’s it.  We are officially heading north and home to CT as of two days ago.  While we didn’t make it all the way to Grenada, our plan early in the season, we made it very close, less than 50 miles.  Next year, perhaps.

With the consistent easterly trades, we have spent most of the winter on a port tack, always heading south.   So, now it’s time to “tack” and head north again.

As if to say “don’t forget us”, we were greeted by a fabulous rainbow in Bequia as we left to head north yesterday after clearing out. 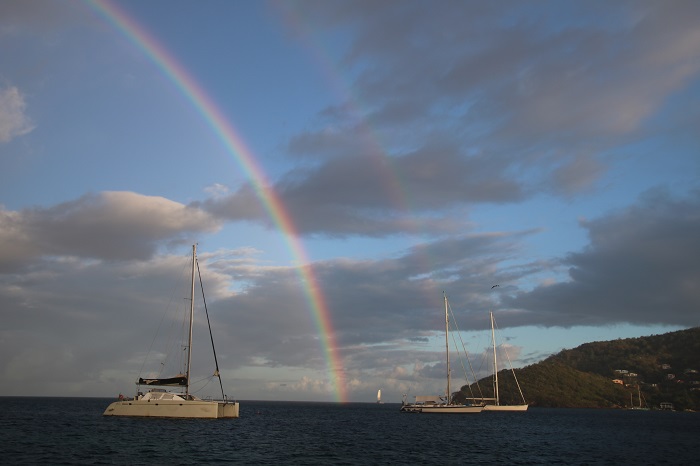 As I write this we are on a mooring in Marigot, St Lucia, where Brenda will head out on Friday and my friend Craig will join me for ten days.  Craig and I will make our way up to Antigua and I’ll be joined by crew for the run home.

It’s going to be tough for me to be left behind when Brenda heads home as it will be about 6 weeks until I arrive home.  It’s too early to head north with Pandora, it snowed in CT last week, I am told, so I have to hang around for a few weeks before heading out.  To head north any sooner would be dangerous, with the threat of strong late season “nor’easters”.   Not my first choice.

However, on a positive note, it’s been great visiting so many new places which will make our run south next winter easier as we will already have a better feel for which spots to visit again.

One of the best spots where we spent time was surely Bequia, with many places to eat out as well as being a terrific spot to have work done on the boat.  We will surely be back next season to have more varnishing work done by Winfield and perhaps some more canvas work too.

We enjoyed our time meeting up with the many couples that we met through the Salty Dawg Rally.  In Bequia we participated in a “dinghy drift” organized by fellow “Dawg” Lynn on Roxy.  She’s a high energy girl and to spend time with her is always fun.   Alas, she’s not in this photo. 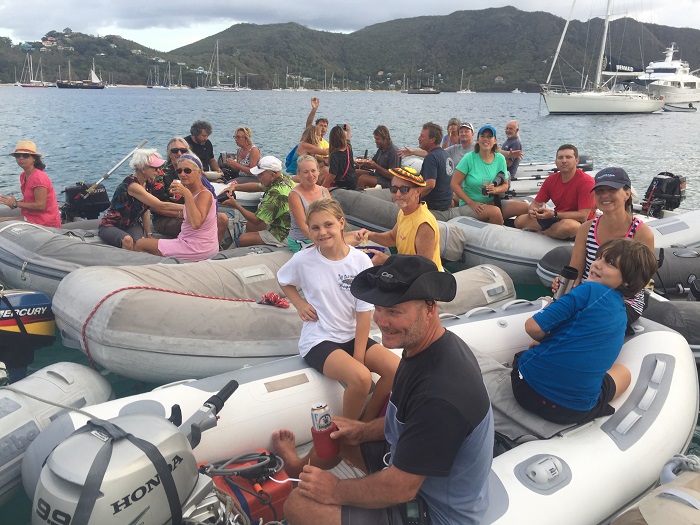 As if the evening wasn’t fun enough already, we were treated to perhaps the most spectacular tropical sunset of the season. 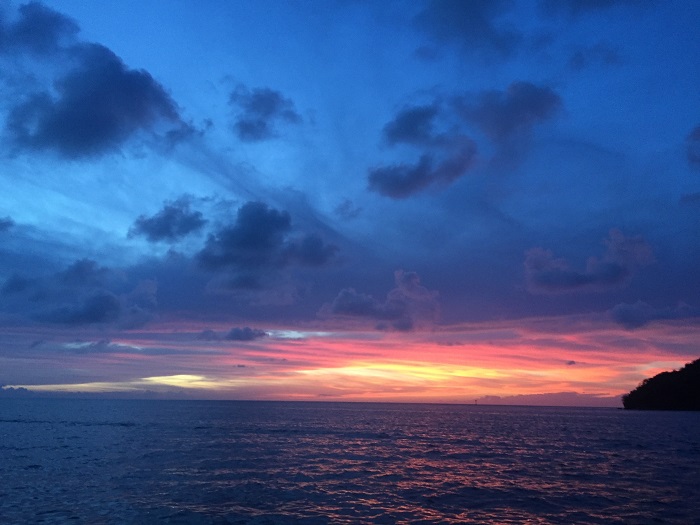 Made even better with Sea Cloud II in the frame. 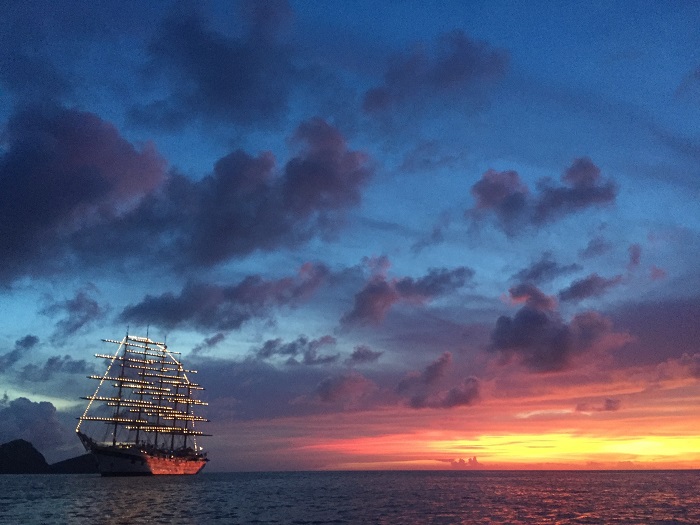 After Bequia we headed south to the Tobago Cays, described by some as a lot like the Bahamas with beautiful turquoise waters. 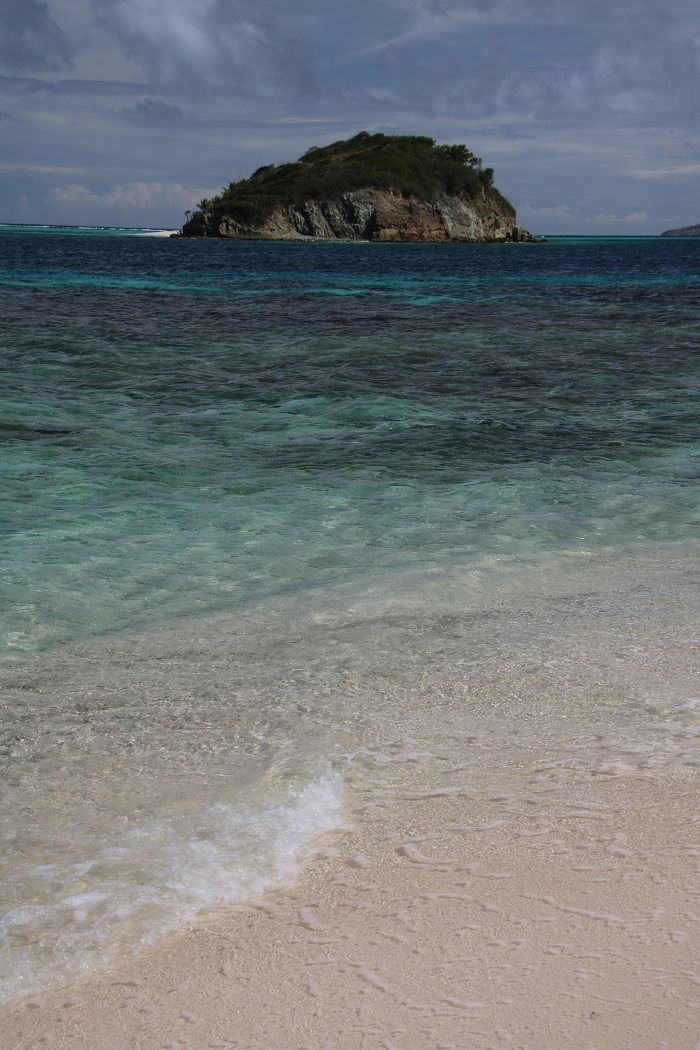 And great snorkeling, if not great pictures.  I guess it’s time for a new underwater camera.   With this camera I guess I have to say “you had to be there”. 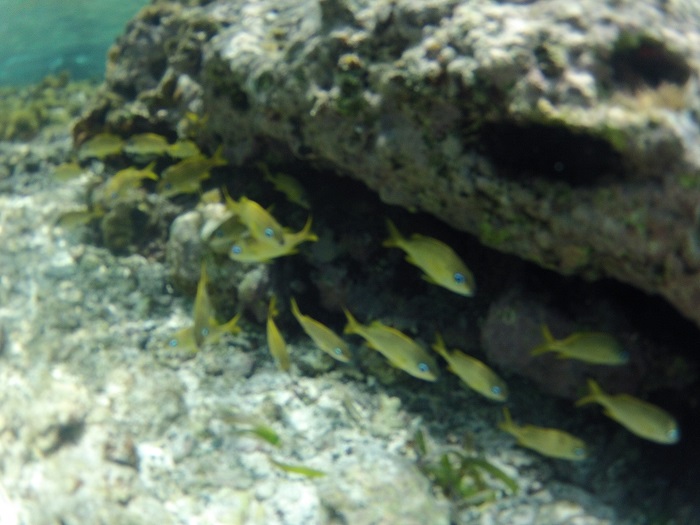 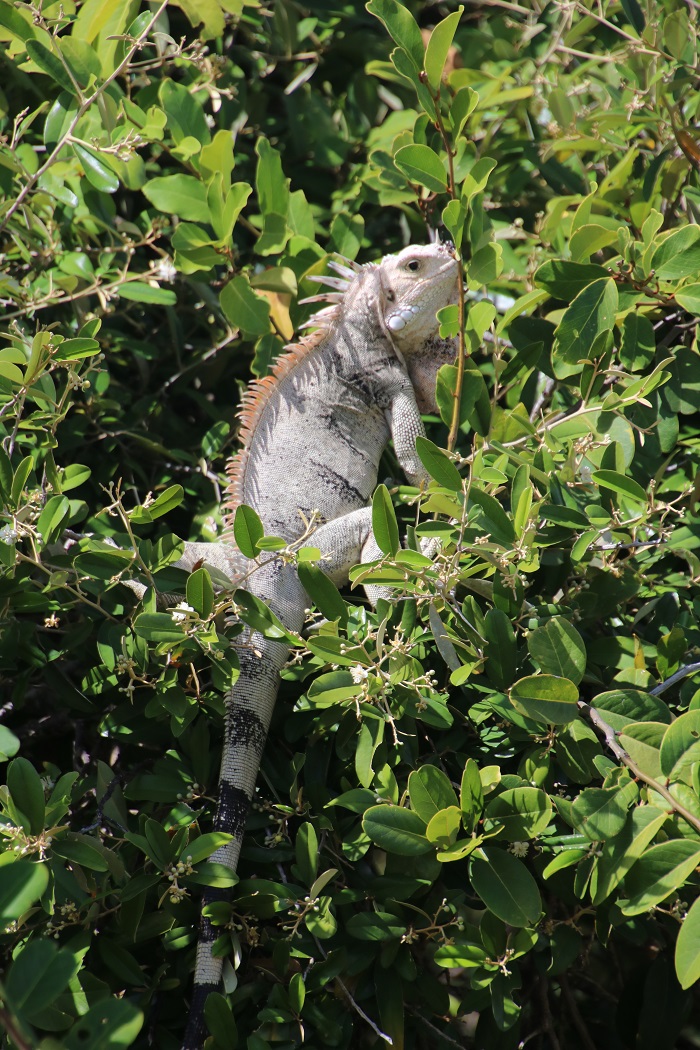 This guy stuck his head up near Pandora as we were weighing anchor as if to say “see yah!” 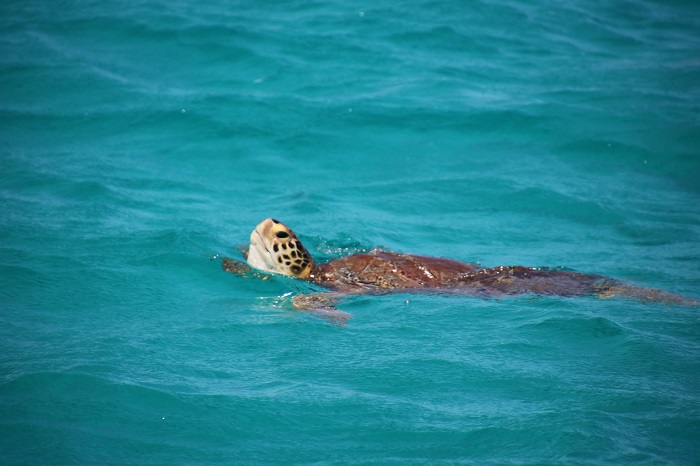 We also visited nearby Mayreau, an island that I had never heard of, ,like many in the Greandines, until we decided to head the short distance there from the Tobago Cays.    It’s a tiny island with lovely brightly painted homes on the steep hillside. 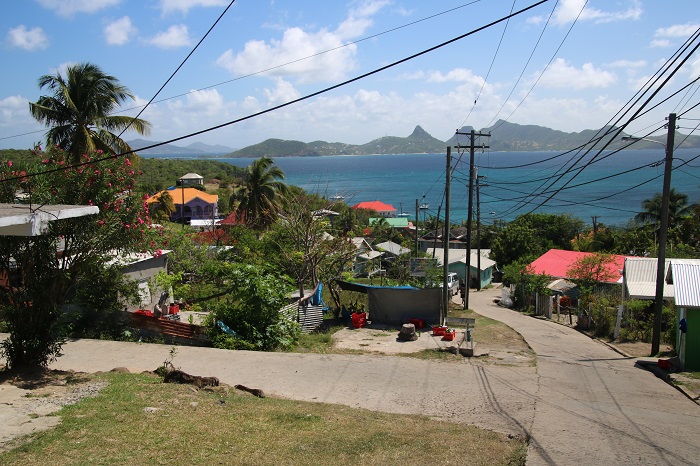 A Catholic church occupies the highest point on the island. 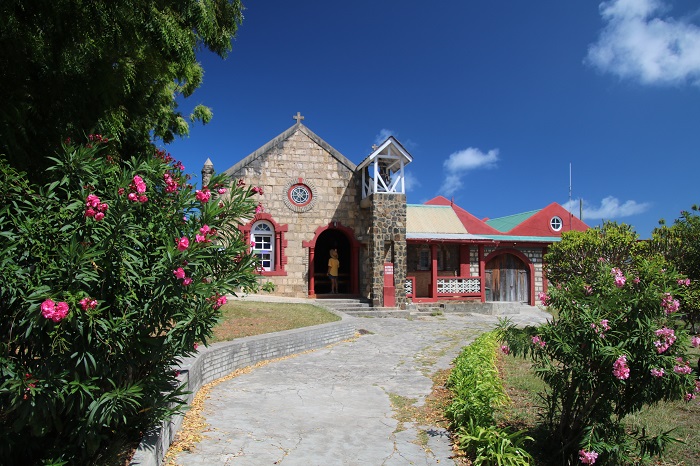 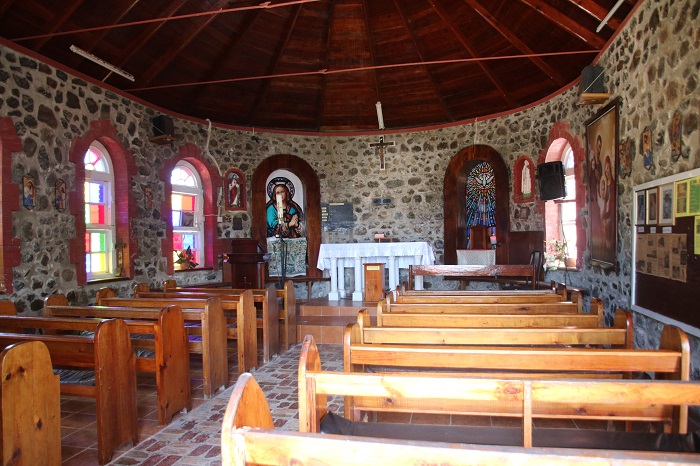 The view of the Cays from the back of the church was fabulous. 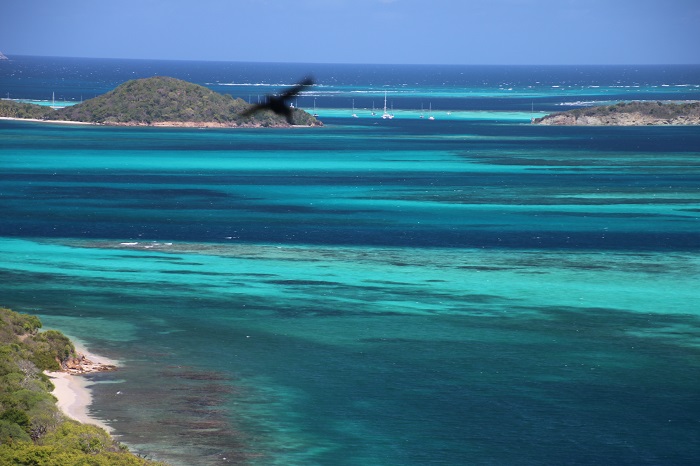 And south toward Union Island and Carriacou beckon for next season. 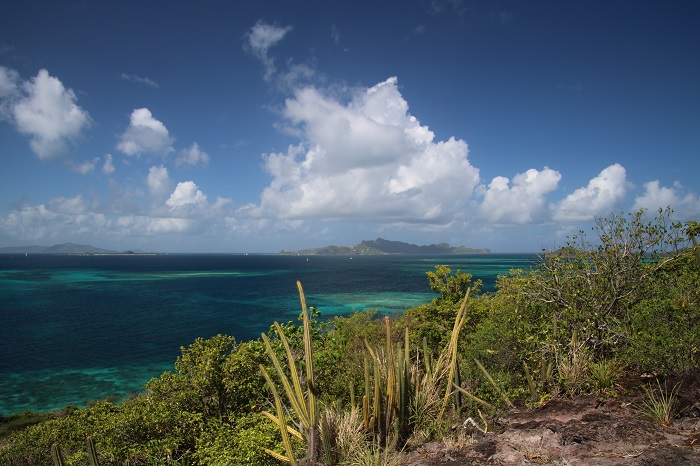 While nearby mountainous St Vincent gets lots of rain, only a few miles south, Mayreau is very arid.  The locals work hard to collect water in cisterns, this one behind the church is the largest I have seen.  The runoff collects at the bottom of the half acre stone and cement catchment area. 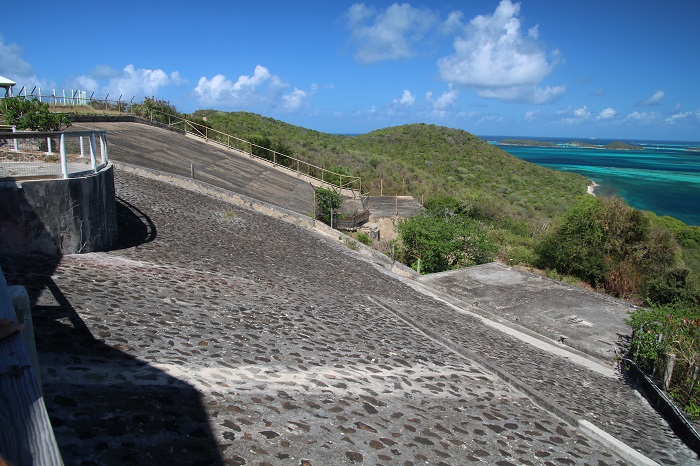 In this arid climate cactus was everywhere.  These flowers were very showy and fist size.  Nothing says “I am not for lunch” like a cactus. 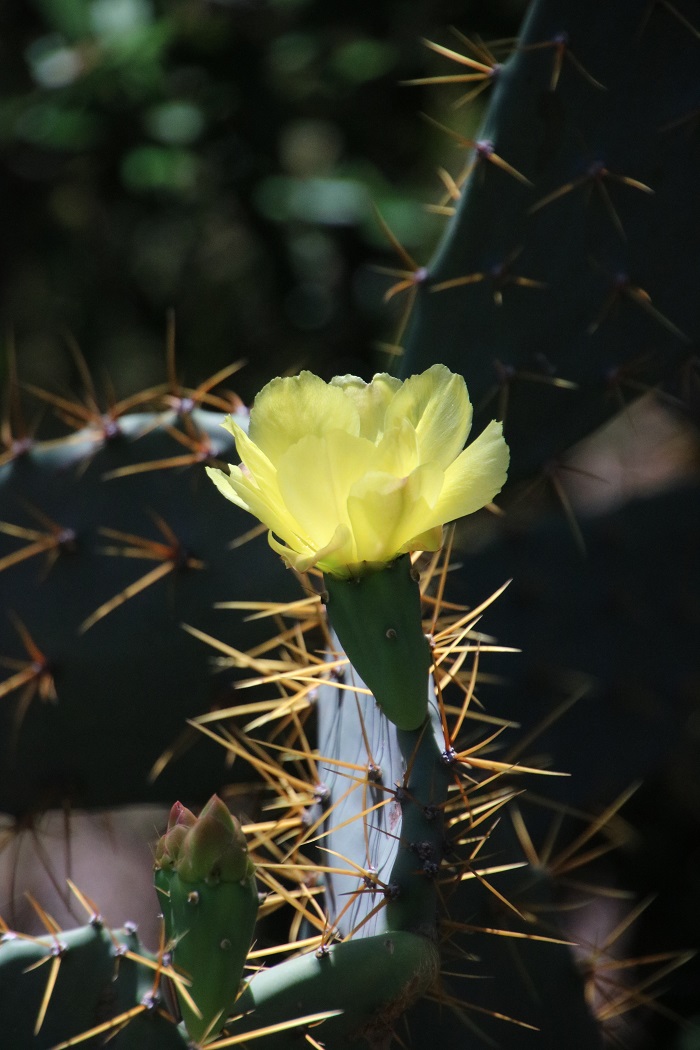 Of course, what’s a post without a view of Pandora in the harbor?  We were anchored with “buddy-boat” Roxy, home to our friends Lynn and Mark.    They plan to summer in Trinidad and head to the western Caribbean next winter.  We hope to see them again soon. 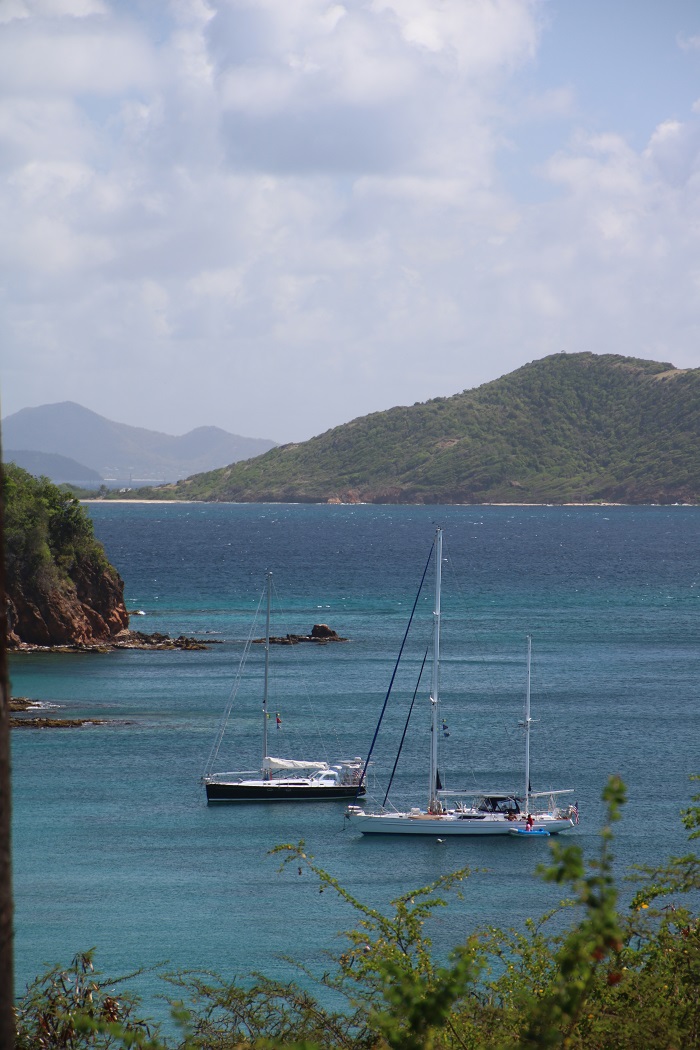 This is the view of the nearby beach, the best we have seen in the Caribbean.   We had it all to ourselves. 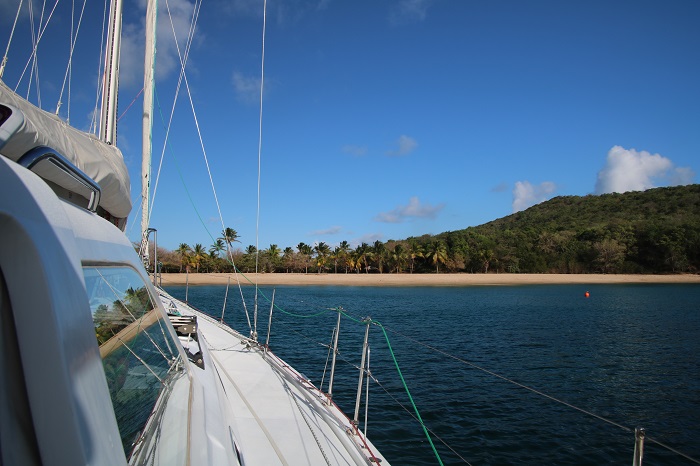 The beach was well kept, free of litter and wonderful soft sand.   The four of us spent a long time soaking in the clear water off of the beach. 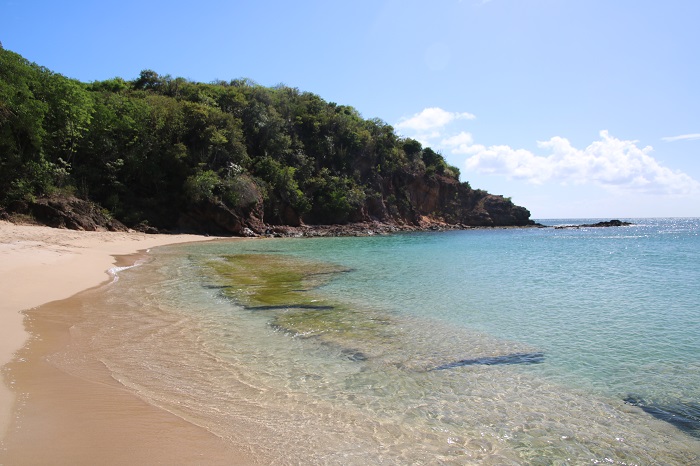 We decided to break up the 80 mile run from Mayreau back to Marigot into two legs.  We had to return to Bequia to check out and then continue on to Marigot, another 60 miles north.   We had heard that the run between St Vincent and St Lucia is among the roughest in the islands and yesterday’s passage was true to that legend as it was when we headed south.   As we made our way north,  we encountered steep waves on a close reach.  The relentless trade winds push water past the islands, into the Caribbean sea at speeds of up to two knots and always to the west.

Fortunately, in the lee of St Vincent the waters were calm.    It’s a beautiful island but crime is a problem so almost nobody stops there.  It’s unfortunate that the authorities are unable to do anything to make it safer.   The nearby mountainside was spectacular and lush. 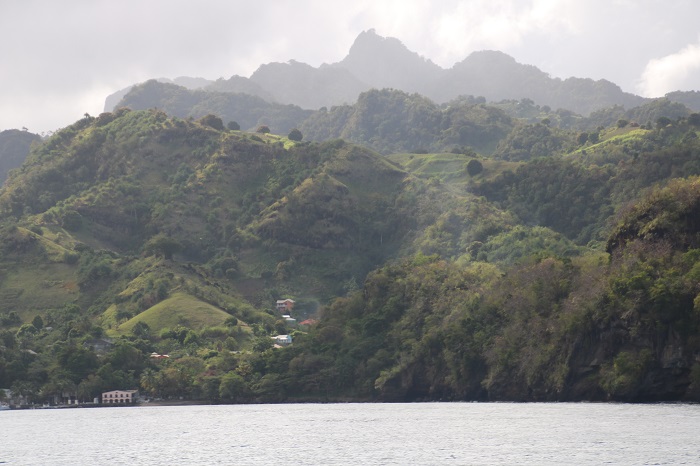 It was alarming to see this boat, with what looked like a machine gun go roaring by.  It looked like a harpoon.  Glad that they didn’t come close.  I know that they do hunt whales in St Vincent but thought that the weren’t able to use motorized boats, only rowing and sail.  Hmm.  I wonder what else they can hunt that needs that sort of firepower?

On the other hand, this fisherman, a long way from shore, was decidedly low tech.   He waved as we passed him. 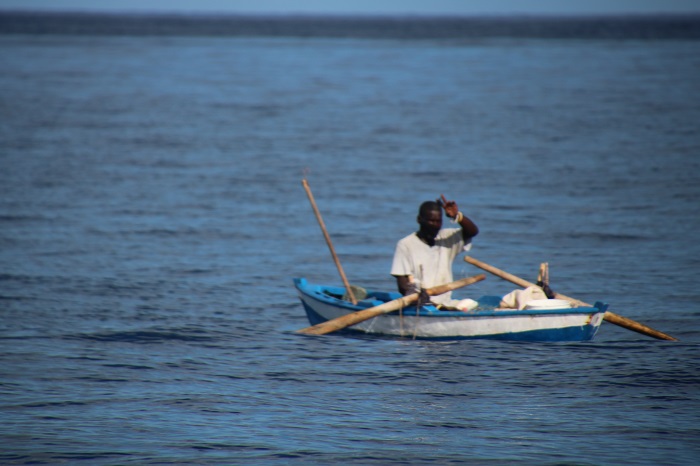 One of the best parts of cruising the eastern Caribbean is that the wind, while pretty strong at times, amd consistently from the east.  Sometimes ENE or ESE but just about always from the east.   So, as we headed south we were ALWAYS on a port tack.

So now, on a starboard tack.  I guess we must be heading home.  Time to move all the loose stuff down below to the leeward side.   Well, at least until we get far enough north to loose the trades.

Brenda hasn’t even gone yet and I am feeling a bit “peckish”.   I’ll miss here.

2 responses to “Starboard tack from now on.”