Well, yesterday we finally left Rodney Bay to sail down to the Pitons but as we passed the tiny harbor of Marigot we decided to check it out.  It’s so tiny on the map that you could easily miss it and we are really glad that we didn’t.   The harbor is completely protected and there are lovely homes scattered on the nearby hillsides as well as a few really nice resorts.   It’s nice to be here for a few days.

We enjoyed our time in Rodney Bay and were pleased that we didn’t encounter any of the reported crime, such as loosing a dink, that we’ve heard happens on  a fairly regular basis.  Actually, had we not heard about these incidents, we would not have had a second thought as we didn’t feel threatened while we were there.  We’d also heard that there were “boat boys” that harassed cruisers but we didn’t see that either.  However, we did make and extra effort of locking the dink at night in addition to pulling it out of the water, which we do, as a rule, wherever we are.  The sunset was beautiful that last evening framing the boat that was anchored behind us. 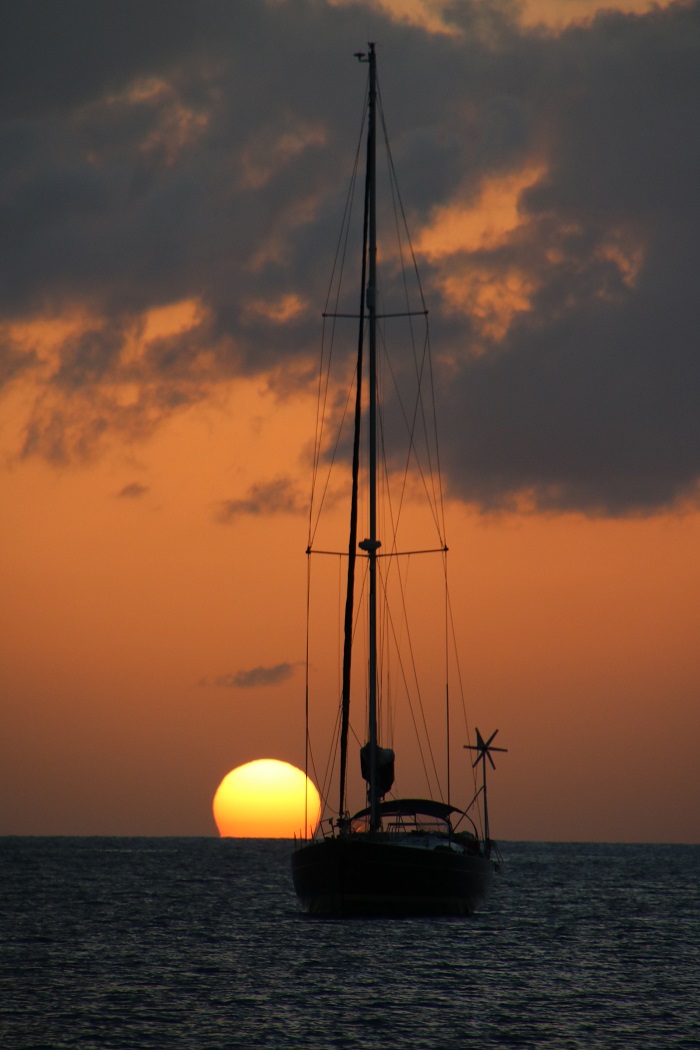 We left shortly after sunrise to make the run down the coast.  We had a short, less than 10 mile run before turning into Marigot.   The western coast of St Lucia is very green and lush. 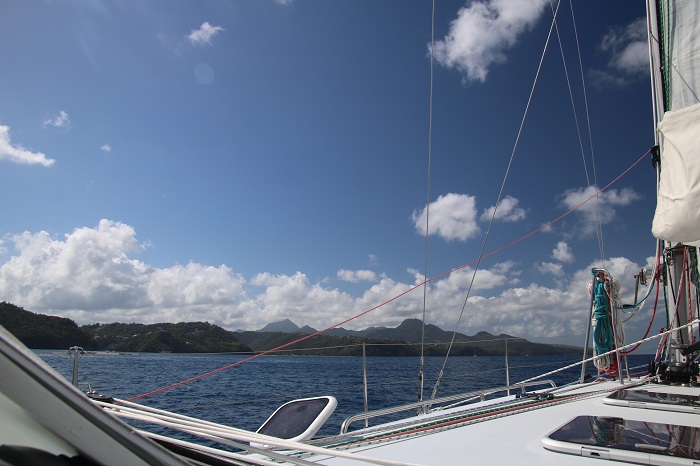 The outer harbor of Marigot is quite narrow and mostly too deep to anchor, however, you can anchor along the side near shore in less than 20′.   There is a beautiful stand of palms along the spit that protects the inner harbor.   They framed the view that greeted me this morning in the early light.  The wind and water were uncharacteristically still.   Those palms really make the place look remote and plenty tropical, like a south seas village. 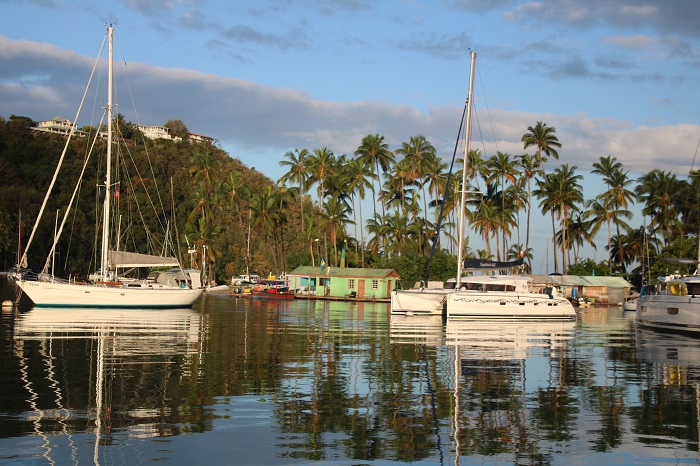 However, it’s not remote at all with the really lux, Capella Marigot Bay Resort along the inner harbor shore .   While we could have easily anchored in the outer harbor, we opted to take a mooring at $30/day as it comes with WIFI and access to the resort facilities.    Not bad as staying in one of the resort rooms will set you back $400 or more.  Here’s Pandora framed in a view from one of the restaurants. 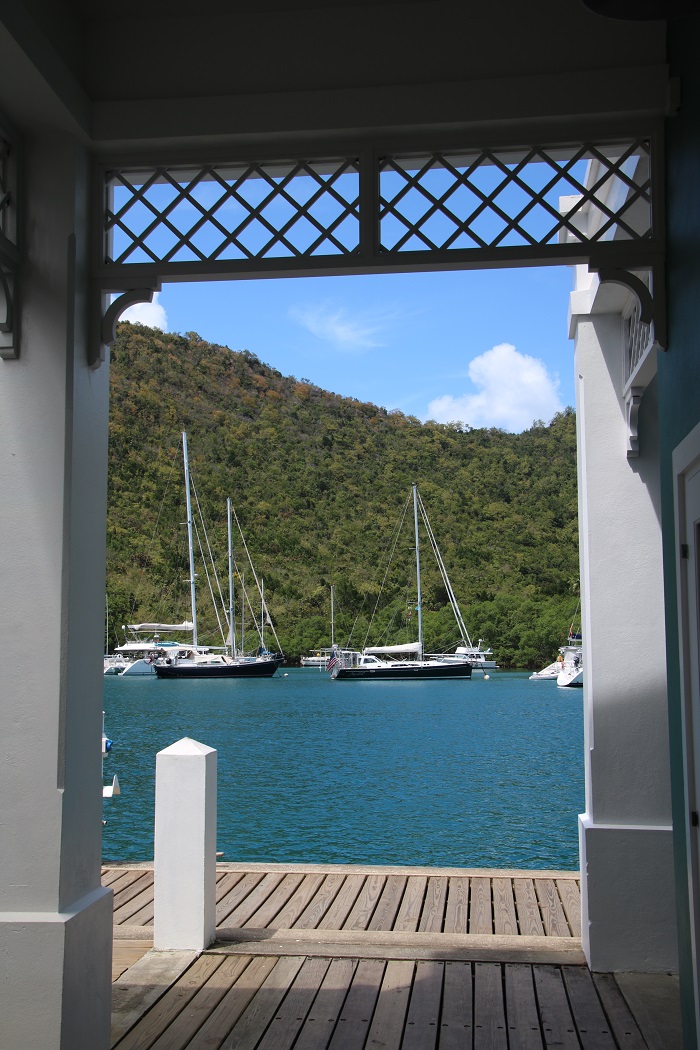 There are actually a number of restaurants to choose from, some alongside infinity pools and many of the rooms have their own mini-pool just outside the room. 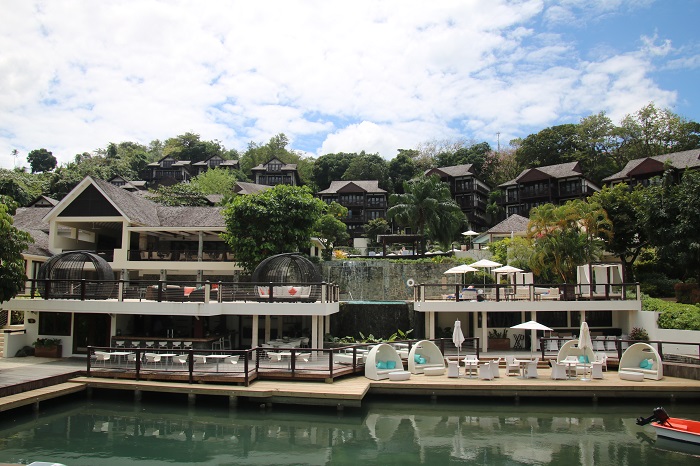 One cascades into the other. 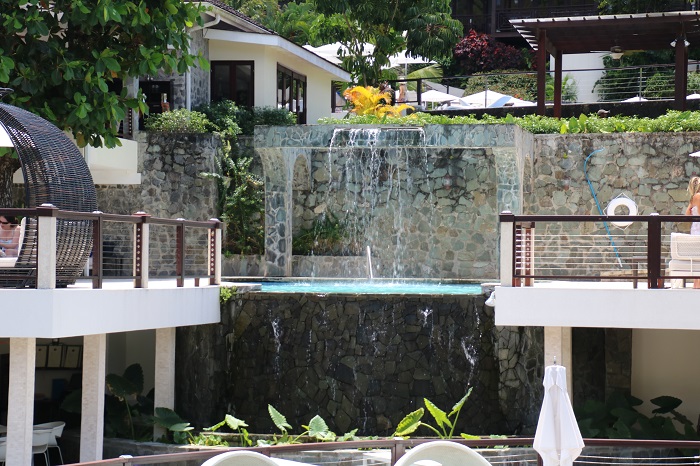 Love the chairs.  George Jetson would have been all about sitting in these. 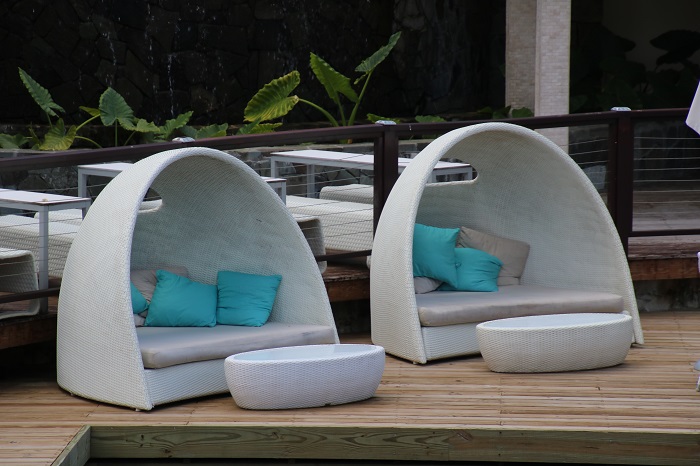 If all this isn’t in your budget, you can always go next door and get your hair cut. 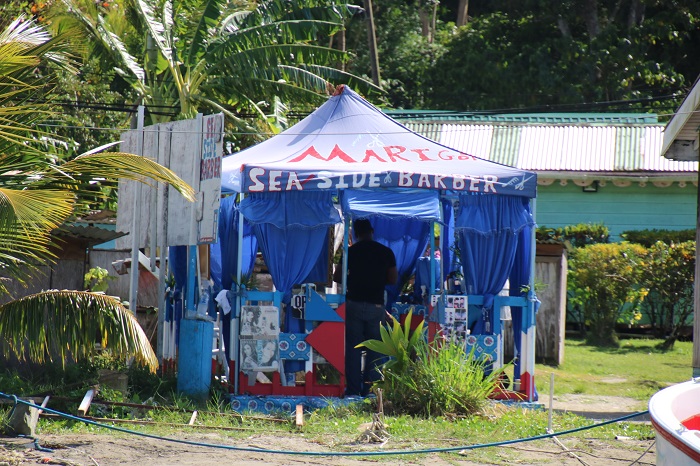 Want to rent a small boat yourself.  There’s plenty to choose from on the waterfront. 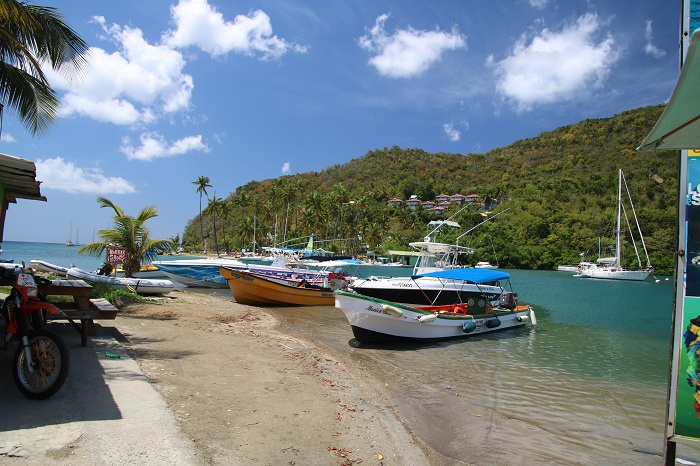 However, most of the residents, and some of them are particularly well heeled, probably keep their own barber on board.  Tommy Hilfiger’s yacht, Flag pulled in yesterday.  It was amazing to see such a huge yacht navigate in this tiny teacup harbor and pull up to the dock.  They do advertise as being able to handle yachts up to 250′ long and Flag is nearly that big.  I realized that it was Hilfiger’s yacht because his “corporate” flag logo was on the side of the superstructure.  After a bit of digging, I confirmed it.  It’s amazing what you can find on the Internet.  Feel like chartering her?  She’s available for 400,000 Euros a week, plus expenses.   The sailboat next to her is nearly 200′ long.  Tells you how bi Hilfiger’s boat is. 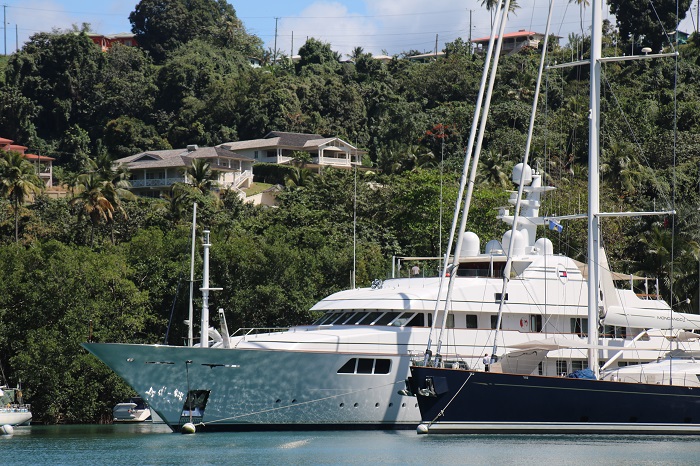 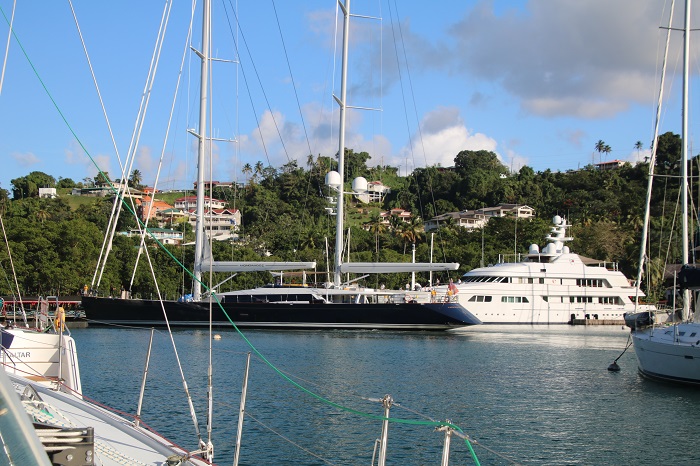 Atlante, another resident here when we arrived yesterday, is much smaller at only a tad over 100 feet and is only a few years old.  She’s spectacular.  Check out her site. Beautiful lines.  Love the traditional stern. 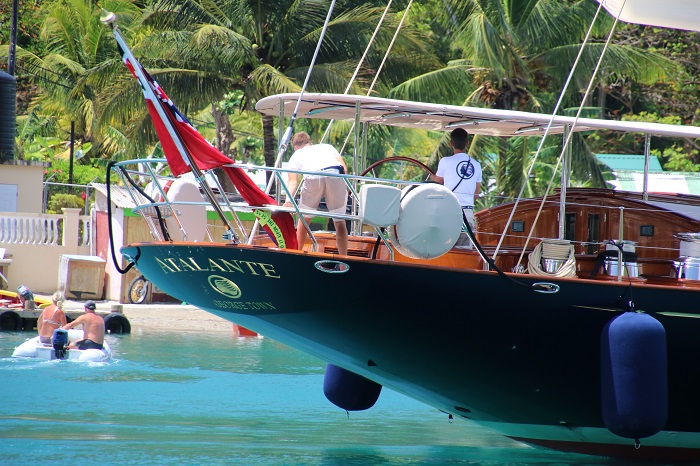 Yes, this is a pretty rarefied neighborhood and it’s going to be tough to pry ourselves away.  It’s supposed to get fairly windy for a few days so perhaps we will just have to hang out here for a bit and then move further south.

Oh yeah, when Brenda flies out in April and my friend Craig joins me for the run to Antigua we’ve decided that Marigot is where we make the switch.   That’s good as we haven’t even left and we are looking forward to 0ur next visit which won’t be a long way off.

Tonite we’ve been invited to join a couple on a nearby boat for cocktails.  They leave their boat in Trinidad for the summer each year and it will be interesting to hear what they have to say about the experience.  His boat looks like it’s kept to a pretty high standard so I’ll be interested in what he has to say.

One response to “Marigot St Lucia. Why leave?”