St Lucia, on our way south.

We are anchored in Rodney Bay, St Lucia, the main harbor on the island.  It’s nice to be back in a country where English is the main language but the trade off is that cheese, baguettes and good inexpensive French wine are nowhere to be found.  When we were in St Anne there were plenty to choose from in a village that was “oh so French” with quaint shops and restaurants as well as a busy bakery that churned out a dizzying selection of pastries and breads from sunrise to sunset.

And, speaking of sunset, last evening’s was beautiful, complete with a three masted schooner in the distance. 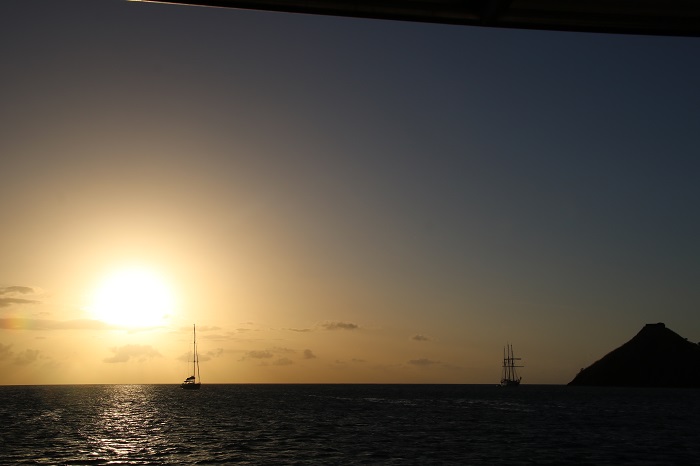 A square rigger ablaze with lights in the twilight. 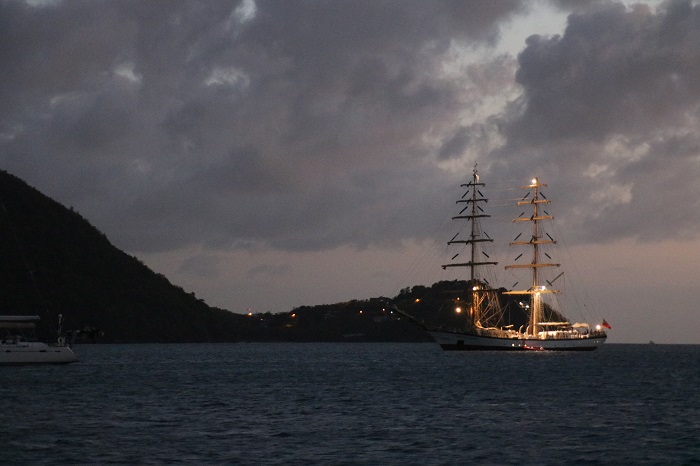 We’ve been here for two days and plan to leave in the morning to head down-island to the Pitons, perhaps one of the most photographed places in the Caribbean.   After that, we will head to Bequia to rejoin a few of our cruising friends for a few days relaxing in what some say is their favorite island in the chain.

This morning Brenda and I took a hike up to an old British fort, overlooking the harbor.   The view of the harbor down below was impressive. 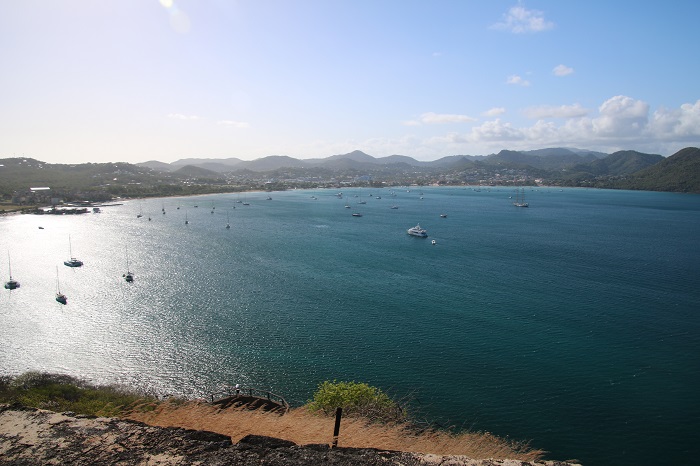 The view south toward the Pitons and a schooner heading out. 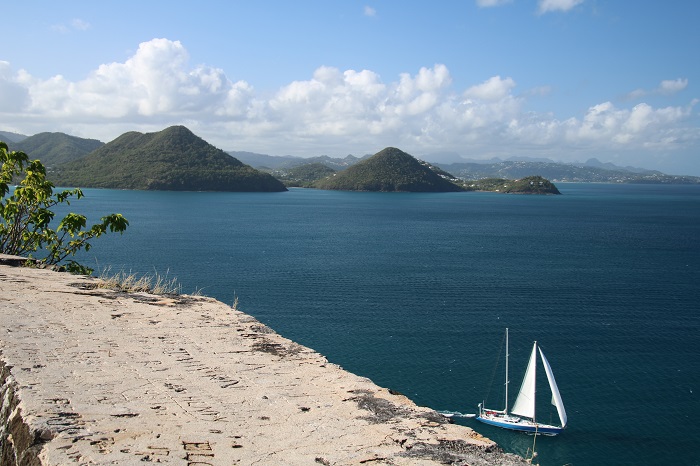 This harbor was an important stronghold for the British during the 17th and 18th centuries.   Nearby Martinique, which is easily seen from the fort lookout,  was an important port for the French so keeping watch afforded a good view of any impending attack.

Downhill from the fort, ruins of troop housing, still impressive after so many years. 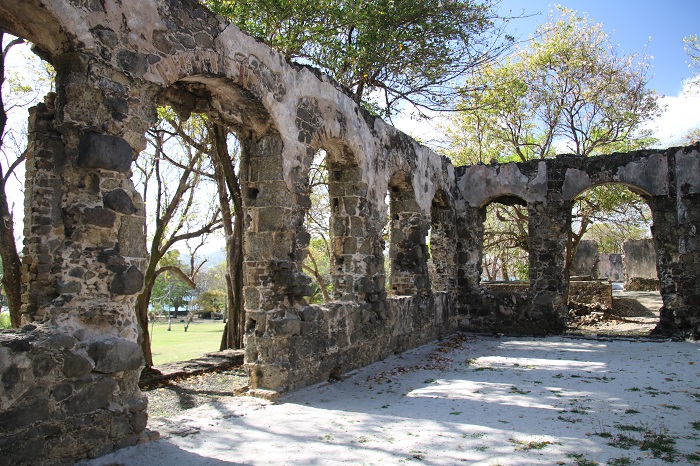 When we returned from our hike a fruit and vegetable vendor came to visit in his “eclectic” store. 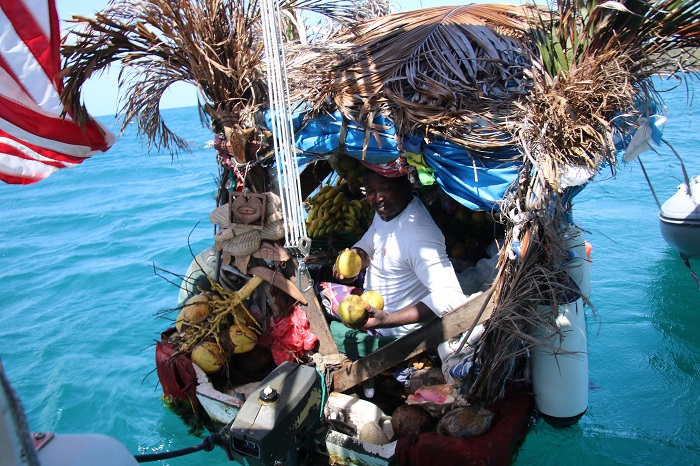 We bought a variety of produce including this huge and very lumpy lemon.  The produce looked pretty rough compared to what we see in US markets but I expect that what it lacks in good looks will be made up by great taste.   In the US we sometimes forget what local is supposed to look like. 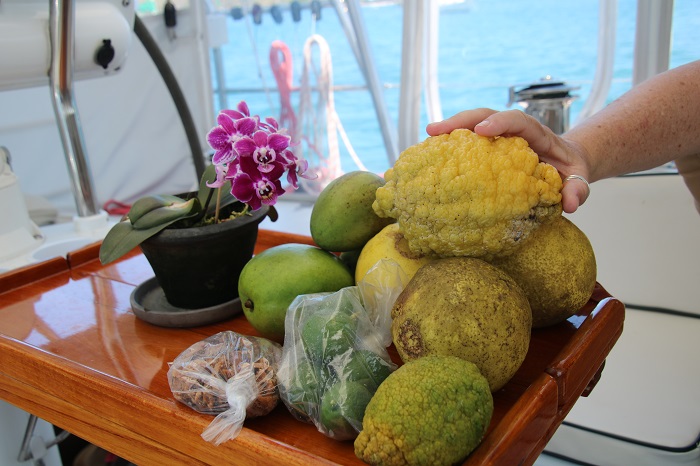 As I headed in to do some errands and this post, I passed a lovely gaff rigged sloop plying the blue waters of the harbor. 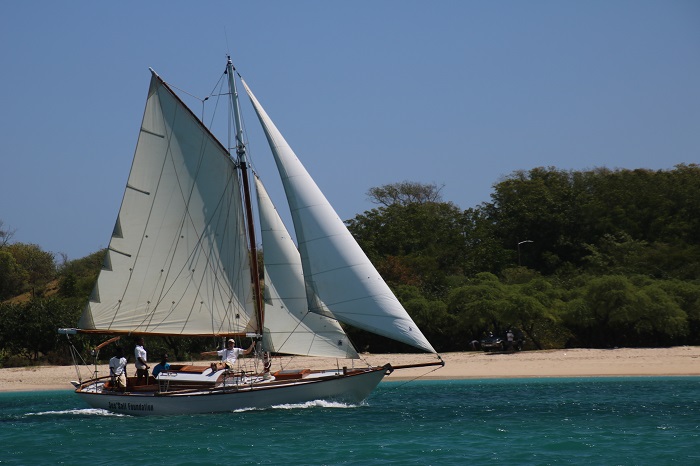 Well, it’s taken a lot longer to do this post than it should have thanks to really, really SLOOOOW Wifi.   I had to try two different spots until I found a spot where the speed was, sort of, OK.   It seems that mid day is just too busy with lots of folks competing for time on the server and everything just slows to a crawl.

However, I am finally done so I can head back to Pandora to fix, finally, Brenda’s potty.  Fingers crossed that the new parts, specially shipped from the US, do the trick.

2 responses to “St Lucia, on our way south.”