Tomorrow, after a month in Martinique for Pandora, we head off to St Lucia.  We have heard about problems for cruisers visiting the island as theft and petty crime can be a problem with outboard motors stolen on an alarmingly regular basis.  It’s unfortunate but we have been told that with reasonable precautions, like pulling the dink up into the davits at night, which we do, every night, that the thieves will likely choose someone else’s and leave ours alone.

However, St Lucia it will be as we have parts for Brenda’s toilet waiting for us there and we are excited about getting things back in order.  Well, I can tell you that Brenda’s excited and if it keeps her happy, I am totally game.

After St Lucia we hope to head a somewhat farther south to Bequia and perhaps the Grenadines where we will turn north again so Brenda can fly out of St Lucia for home in April, Friday the 13th, actually, not to put too fine a point on it.  Hmm…

In preparation for leaving tomorrow, I checked out with customs today and we will leave first thing to make the short 22 mile run to Rodney Bay, on the north west corner of the island.  I expect that it will be a “sporty” sail, with 20+kts on the beam and ocean waves of 7-10′.  However, with Pandora’s now clean bottom, we should make the trip in good form.

In my last post I alluded to our visit to a rum distillery and a visit to St Pierre on the northern end of Martinique and I thought that I’d share some of that experience.

There are many distilleries in Martinique and sugarcane is still a major crop.  Sugarcane is a large tropical grass, introduced to the America’s by Columbus, you know “in 1492 Columbus sailed the ocean blue…with sugarcane…”?  It grows well in the local warm and wet climate here.  The industry in the Caribbean began in Barbados in the 1600s and spread through many of the other islands.  Producing and refining sugar has been big business in the islands for hundreds of years now and while cane sugar from the Caribbean has been largely replaced by cheaper sources elsewhere, today’s crop is still important but generally consumed in the production of rum and there is plenty being made here in the islands.

Broadly speaking, there are two types of rum produced in the caribbean, Rhum Agricole made from freshly pressed cane juice, primarily in the French islands, and that made from molasses, a byproduct of cane sugar production.   The latter type is generally associated with British Islands.  Don’t ask me to describe the differences but the link above provides a good overview.  However, it’s safe to say that they both go down easily, especially after the first round.

Brenda and I visited a number of other distilleries a few weeks ago when we rented a car with some friends.  I wrote about our great day in this post.

During our last outing a few days ago we visited the home of Rum Depaz, where they have been making fine rums since 1651.  These grand plantations once used many African slaves to tend to every aspect of the growing and harvesting of sugarcane and the making of rum.  Slavery in the islands was a brutal time but fortunately, modern equipment has made it possible to continue and improve production at much less of a human cost.  There are many excellent books about this dark history and if you’d like to learn more I recommend the book The Sugar Barons,  a well written history of the industry in the islands and it’s brutal past. 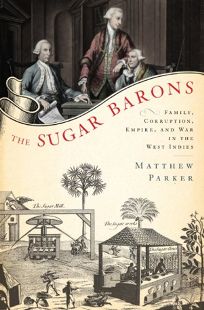 It is hard to overstate the importance of the Caribbean sugar industry in the 17th and 18th centuries.  During this period, the tiny island of Barbados had exports of sugar that were more valuable than the entire export income of North America.  Great fortunes were made and lost along with a great human toll on both blacks and whites that died in great numbers in these islands.

Plantation owners generally made their homes on the same property where the cane was grown and processed.  Many of the modern operations in Martinique have restored these old homes and now offer tours.  Unfortunately, Brenda and I were too late for a tour here but enjoyed walking the grounds.

It’s pretty clear that the owners of Depaz did pretty well for themselves. 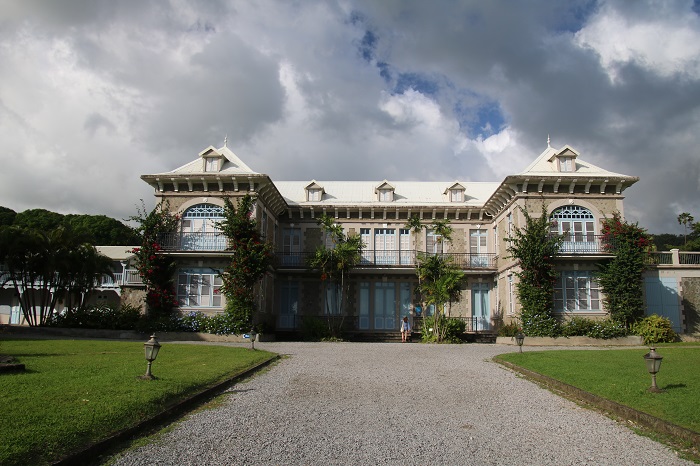 Bougainvillea climb each corner of the massive home. 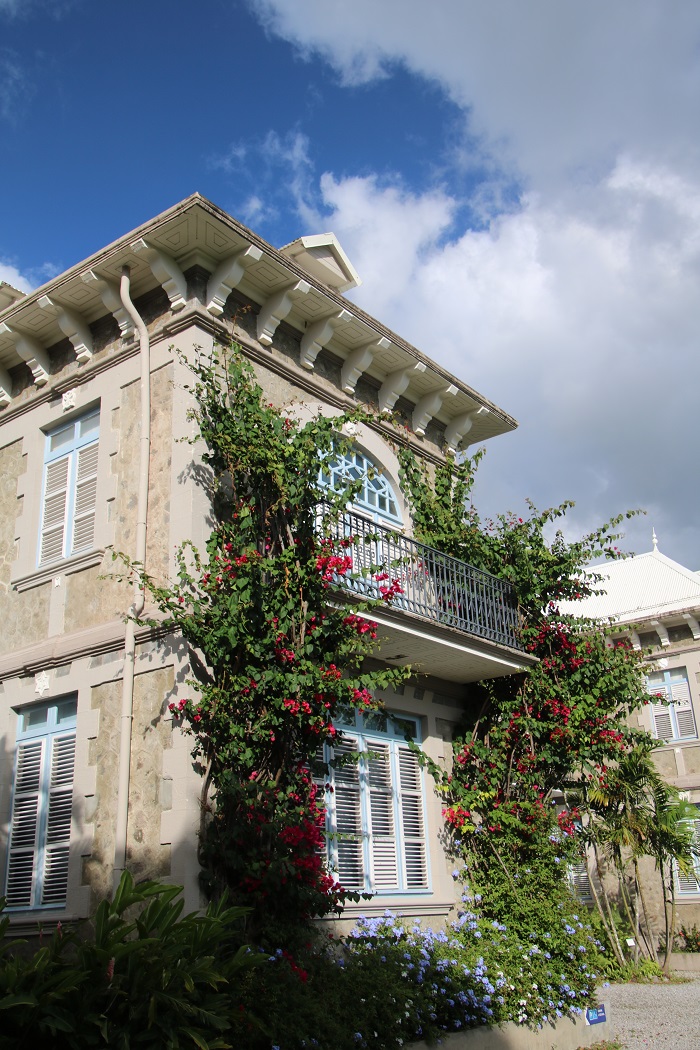 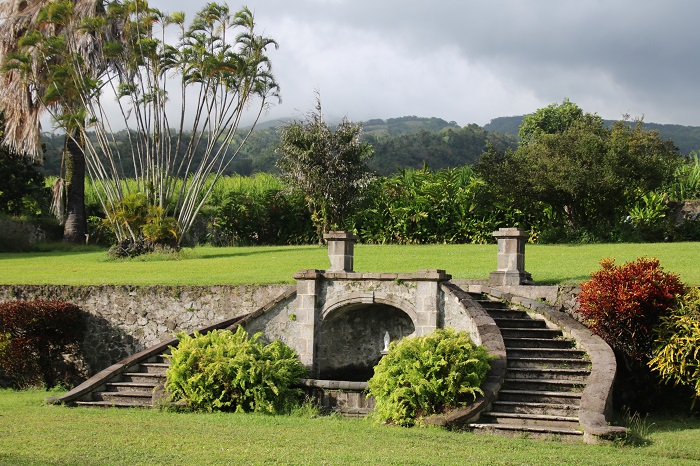 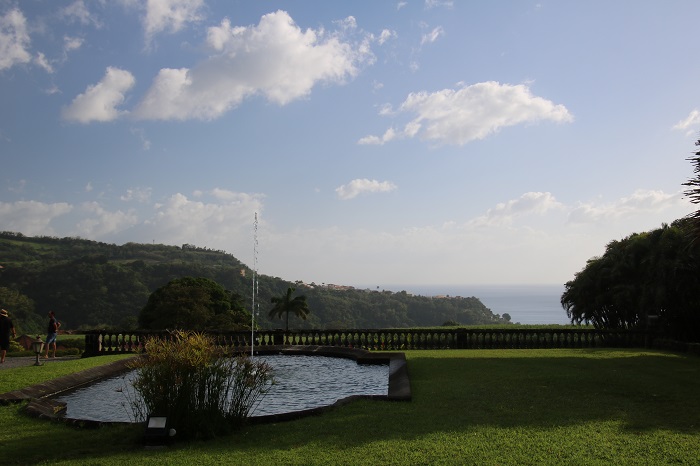 Immediately adjacent to the home is the modern production facility. 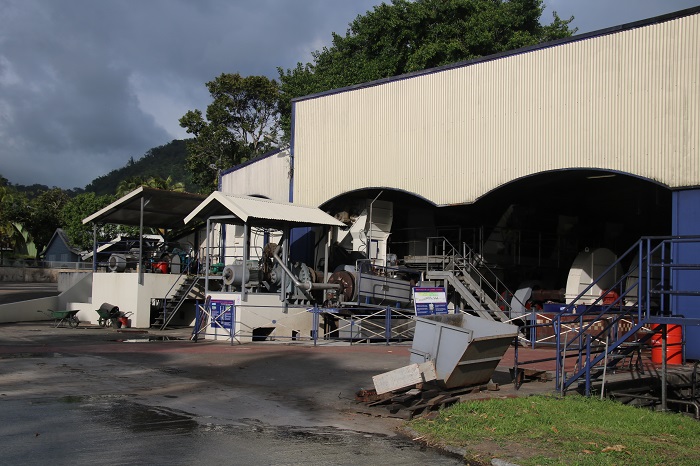 There are many buildings in the complex. 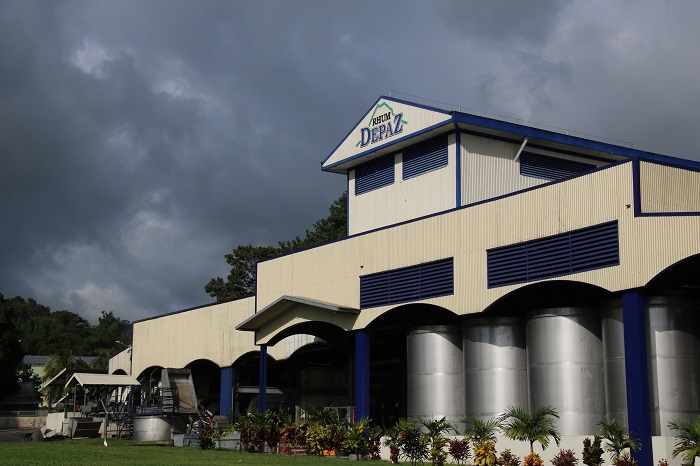 Including the reception center and tasting room.   Unfortunately, they closed before we got there.   However, I was able to beg them to let me in so I could buy a bottle to have my own tasting. 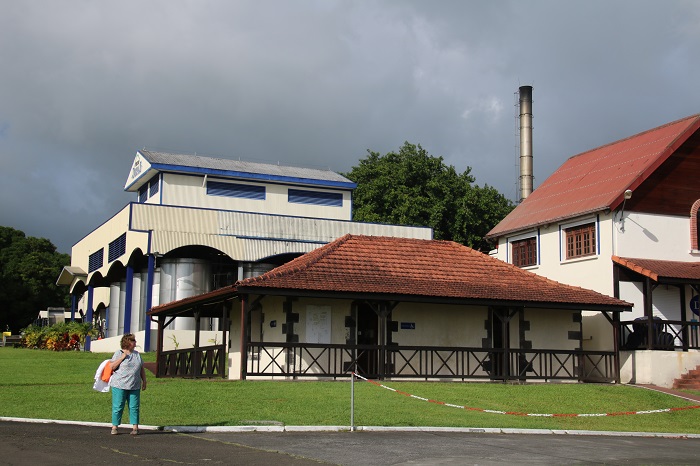 While the modern equipment is powered by electricity, water was once the primary driver of the machinery that processed the cane which had to be cut and crushed quickly to avoid premature fermenting in the tropical heat. 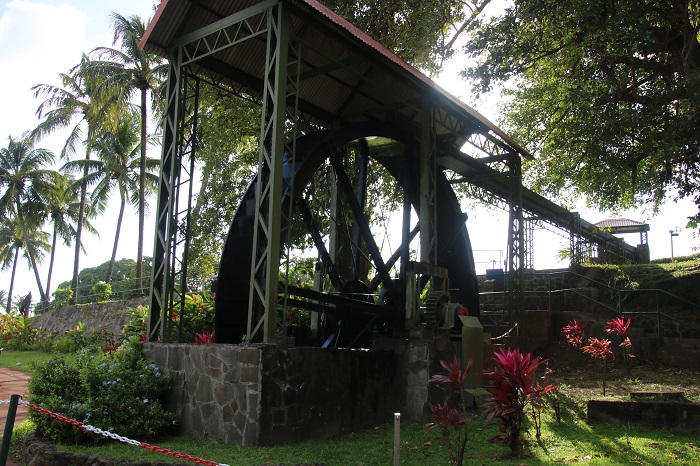 There are still remnants of the aqueducts that moved water to the factory.   As Martinique is a very wet country, there is usually plenty of water and this spillway was designed to carry away excess water beyond what the factory needed to power the crushing machinery.   The day we were there plenty of water was flowing over the spillway and onto the parking lot. 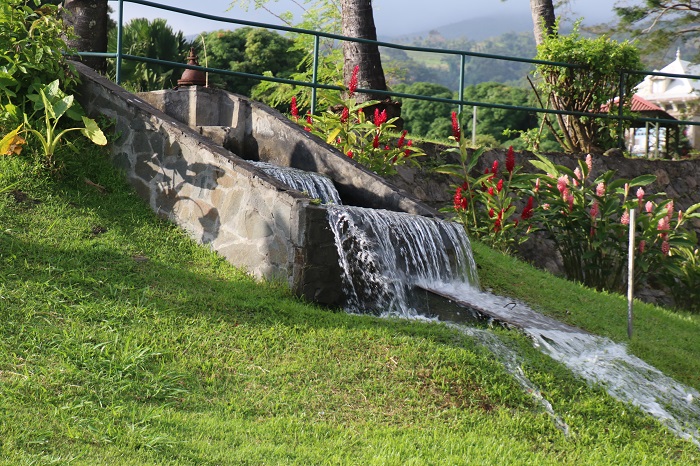 Modern equipment now does the backbreaking work that once took hundreds of slaves. 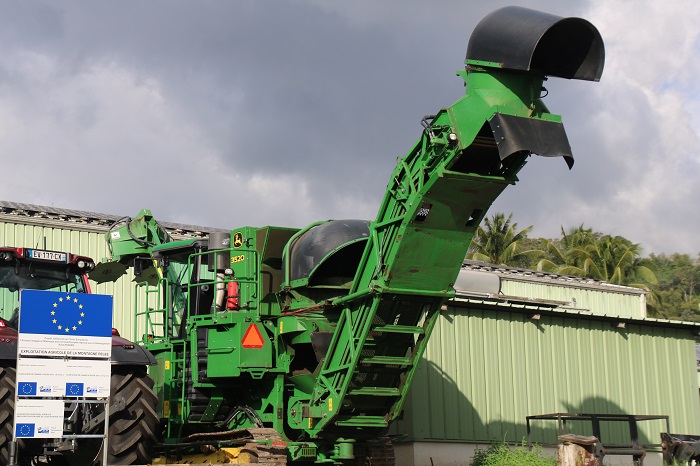 This is the business end of the combine.  The boom at the top employs two massive circular blades to cut the cane and feed it into the steel “maws”.  inside the machine the cane is chopped up and separated from the leaves that are spit out the back to help rebuild the soil.  This is not a machine to be trifled with. 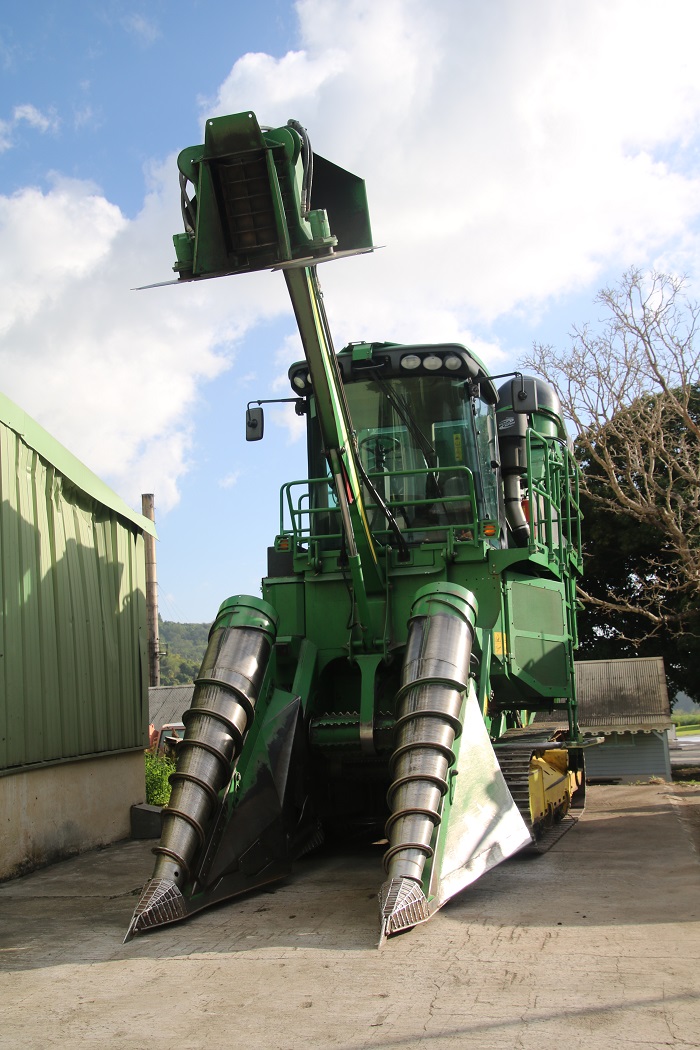 After visiting Depaz, we headed to the coast and St Pierre.  Today the city is a popular tourist stop and no longer the capitol of the island.  The local beaches are black volcanic sand and provide an gentle arc along the coast to the north. 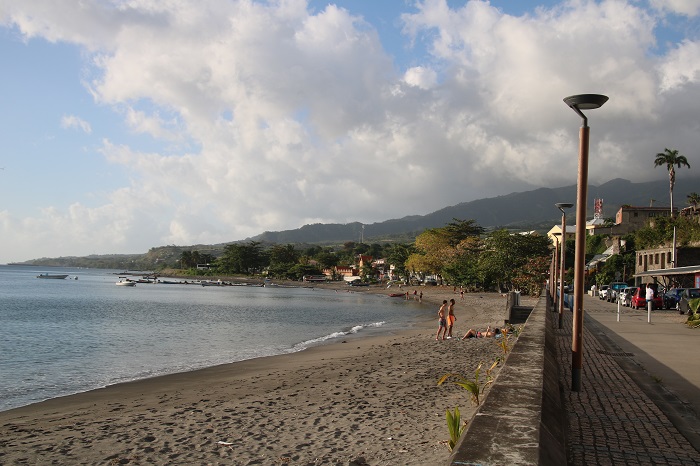 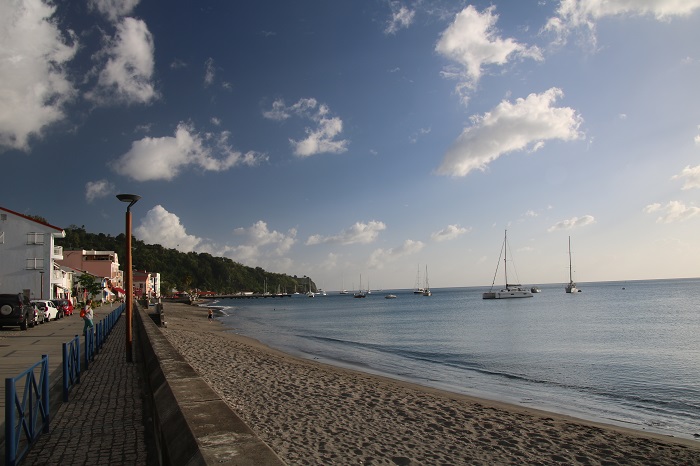 Main street is lined with small shops and restaurants. 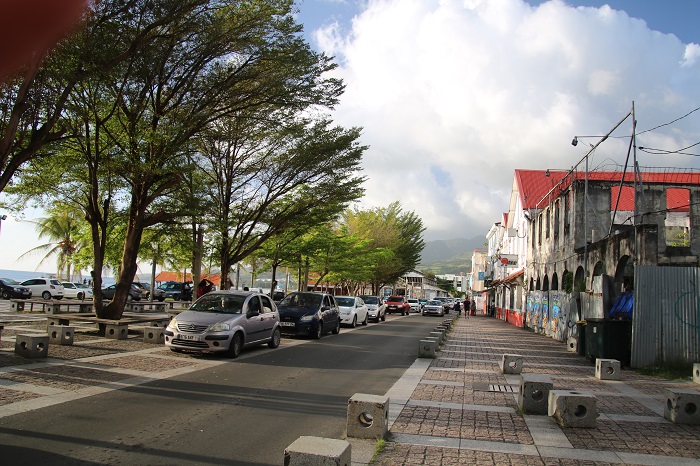 Remnants of the once capitol buildings are preserved as a reminder of the power of the volcano.   Unlike Montserrat, Pelee is currently dormant and scientists constantly monitor it for activity. 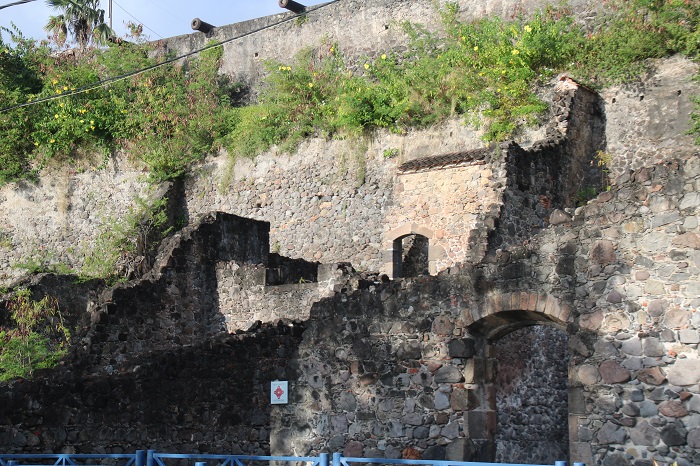 Today’s buildings still retain the charm of what might be called simpler times. 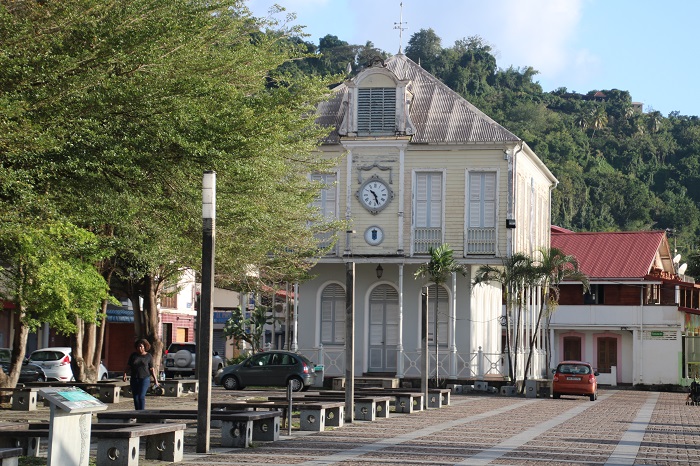 Unfortunately, we were late and many of the businesses were closed but it was nice to visit.  Many boats were anchored off of the beach, including Ishtar, sister ship to our last Pandora, our SAGA 43. 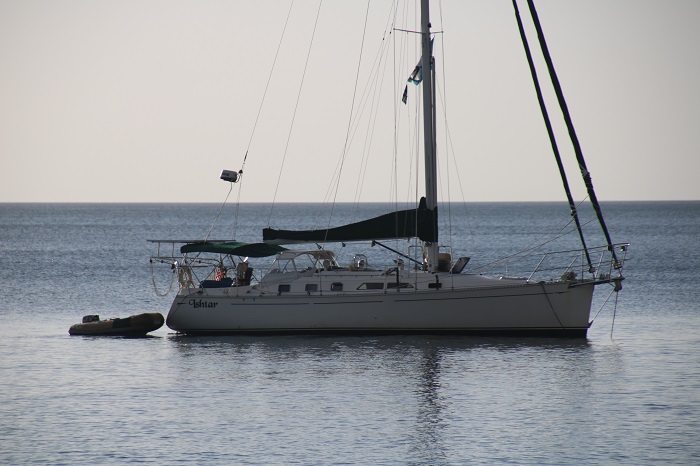 Perhaps we will visit aboard Pandora on a future trip through the islands.

It’s fascinating to visit Martinique and learn about the history that shaped this colorful island nation and the effect that sugar has had on every aspect of the island for hundreds of years.