While there was a weather window for heading south while we were in the US for two weeks, the trades are up again and it’s hard to know when we will be able to head south to St Lucia.  Beyond the desire to see something new, we are also anxious to get there to take delivery of the repair parts for Brenda’s head, or “potty” as some would call it, including Brenda.  Of course, it’s really a “head” but when pressed, Brenda will say “potty” with the cutest look on her face.

Anyway, here we are for a few more days in Martinique.   Yesterday I cleaned the bottom of Pandora and let me tell you, it was  a BIG job.   It’s been over a month since I did it and she has sat in a busy and “organically rich” harbor with well over 1,000 boats, without moving for quite a while.  I was stunned when I got into the water and saw the “fur” covering her bottom.  I normally use an aggressive Scotchbrite pad, the same sort that you might use to clean a grill and it usually works quite well.  However, the slime was so thick, think 3/8″, that it loaded up the pad almost immediately.  Fortunately, I was able to use a 6″ flexible putty knife and that took nearly all of the accumulation off fairly easily.

However, it turned out that I was in the water for nearly two hours and was completely pooped when I was done.  I also find that after a cleaning the bottom, as I spend so much time upside down, on my back, looking up at the hull, that I end up fairly nauseous and it takes a few hours to get over it after I am done.

Anyway, it’s mostly cleaned up now but the prop was such a mess that I had to get a really tough brass wire brush today and go at the prop and gear again as the paint failed.  It didn’t wear off, it just stopped working.  When I put on a fresh coat of bottom paint last fall I also put some special prop paint on the running gear.  What a mess.  Yesterday the scrubber just wore away before I was able to get all the growth off.   Don’t buy this product. 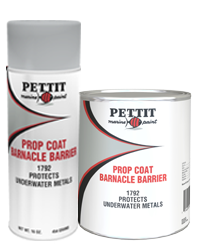 With literally a thousand boats here in the harbor, let’s just say that the water is “rich”.   And, speaking of rich, when I got out, my shorty suit was completely coated with thousands of tiny shrimp.  It took quite a while to clean them all off.  Brenda wasn’t amused.

I should also mention that our T Mobile phone isn’t working very well as a WiFi  hot-spot here as the speeds are just too slow, at 2G, and WAY slower during the peak daytime.  Actually, it doesn’t work at all most of the time.  Calls are fine but that’s only something that we do occasionally as WiFi calls are fine too.

However, I may have identified a better option that’s available through Google.  It’s called the Google fi phone and has much faster speeds here in the islands and costs a bit less than T Mobile.   I learned about this as one of the cruisers here had asked me to take delivery of a phone for him and set it up while we were in the US.    I was impressed with it and am hopeful that this will pan out foe us as I’d prefer to be able to use a single phone in both the US as well as when we are traveling and not to have to switch back and forth, as we have for the last few years, between T Mobile and Verizon depending on if we are here or in the US.  I am hopeful that it will work well enough in the US so that I can just ditch the Verizon phone, once and for all.

So, with the strong winds and north swell from large storms in the North Atlantic, we are going to stick around here in Martinique but things could be worse.  I say that, in part, because our home in CT is without power for several days now.   Aboard Pandora all that we need is to have the sun come out and all is well with the solar panels doing the work.  And, if it’s cloudy, on comes the generator.  What could be simpler?

So, before I sign off, I’ll share shots of some neat boats that are here in the marina.   This one seems to be owned by a local business that’s listed on the stern.  A search on the name doesn’t yield much about the boat itself.  I’ll bet that she’s fast. 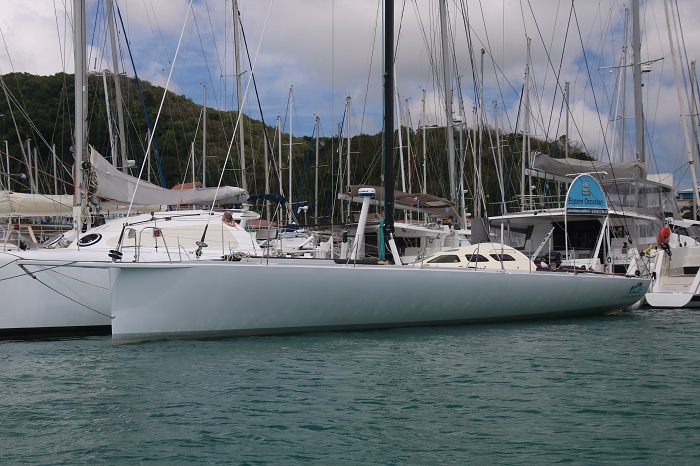 Not a lot of headroom and likely a really wet ride.  If Pandora were a more extreme design, she’d probably look a lot like this. 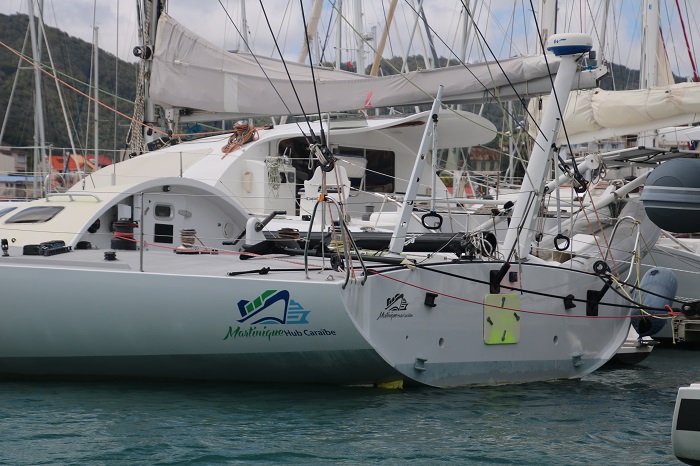 There are two schooners in the marina, just about the only boats of a traditional design in the area.   Aschanti was built in 1955, me too, actually.  She’s as steel yacht and has gone through a recent complete upgrade.  Now that it’s all paid for, she for sale.  I’ll bet that there is an interesting story behind that.   “Clifford, Clifford, are you listening to me?  You can not spend a one more dime on that F%$#@^% boat.”  Click here if you are in the market, or not. 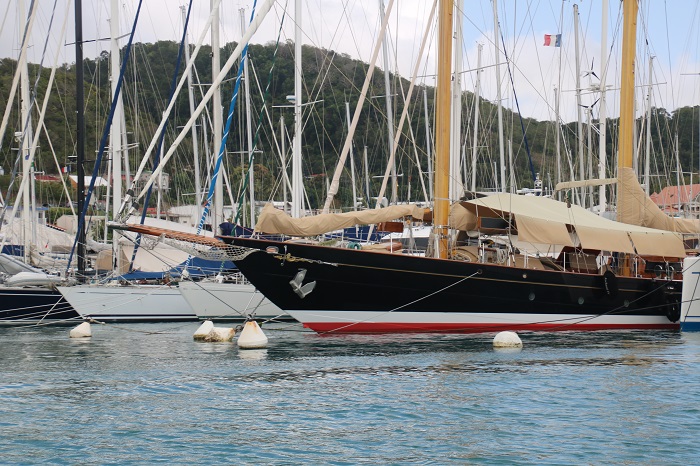 Her varnish is beautiful.  Note the lines set, just so, on the stern. 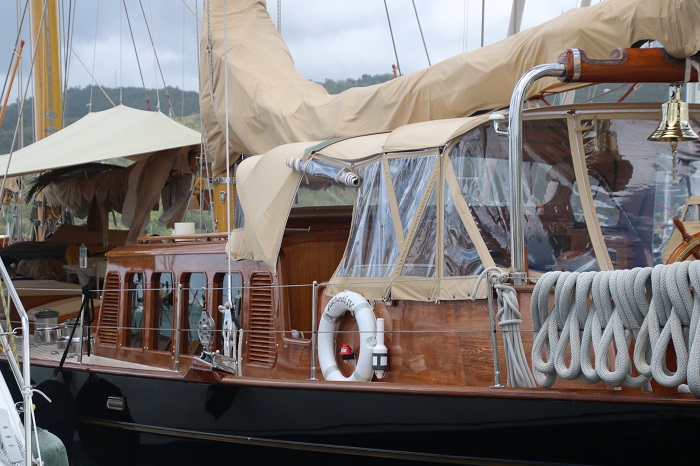 This video,of her recent transatlantic run, gives a pretty good feel for what a blue water passage is like, albeit on a much larger yacht, with a crew, than Pandora.  Love the gambled dining table.   In spite of her sales status, it sure looks like they had fun. Oh yeah, she has an awesome passerrele.   Love the coconut.

Take a look at this helm seat.  Very “Moby”. 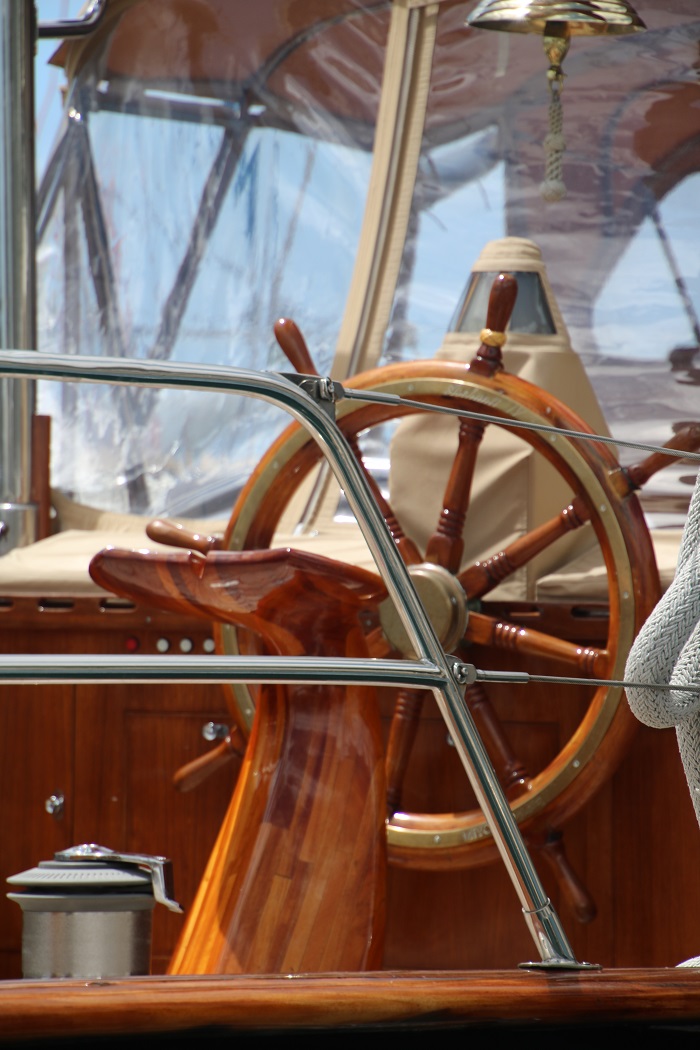 This one, yet another beautiful schooner, Neorion, left yesterday afternoon.   She is a classic in looks but is a totally modern yacht, built in 1999 and refitted in 2014 in the Netherlands. 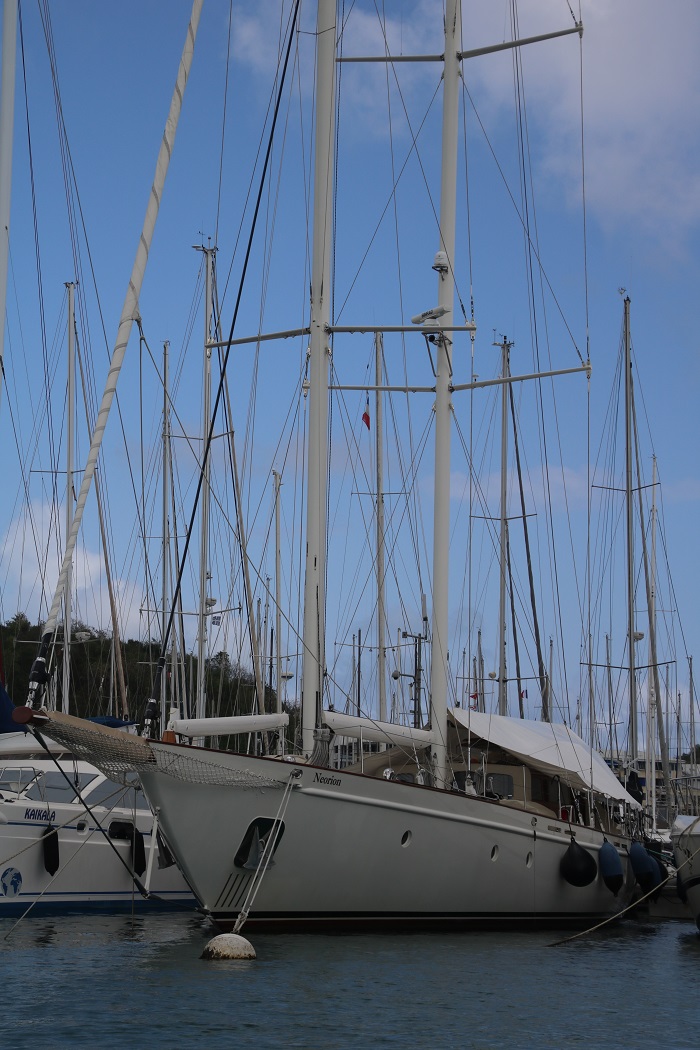 This short video gives a nice tour.  There are very few really big yachts here but this, “mini mega yacht” the 108′ La Fenice, looks like she means business in her mat grey paint.   I’ll bet Darth Vador would feel right at home aboard her.   “Hey you, yes you, storm trooper, fetch me a run punch but make it with dark rum and if you tell The Emperor that I drink girly drinks, I’ll crush you.” 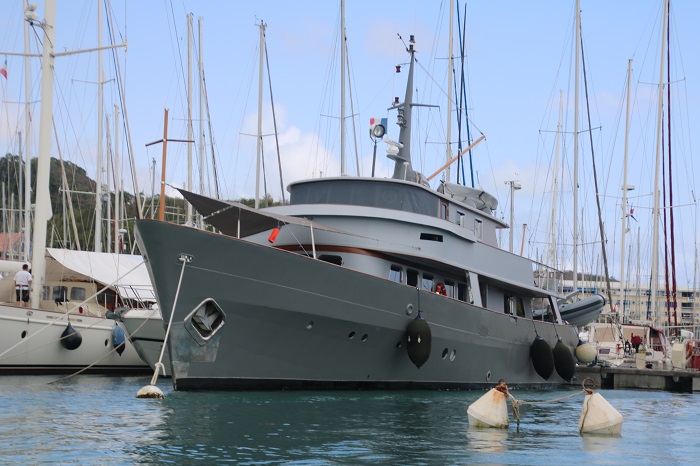 She was built in 1962 and refitted in 2008.  She’s available for charter.  Need to know more, click here for lots of photos.  She’s charming but modest in her design.  I like the look.  Serious and not frilly.  However, now that I see her interior, Darth might feel that it’s just a bit too welcoming for his taste.  “I’m your father Luke! Go to bed, NOW!…” 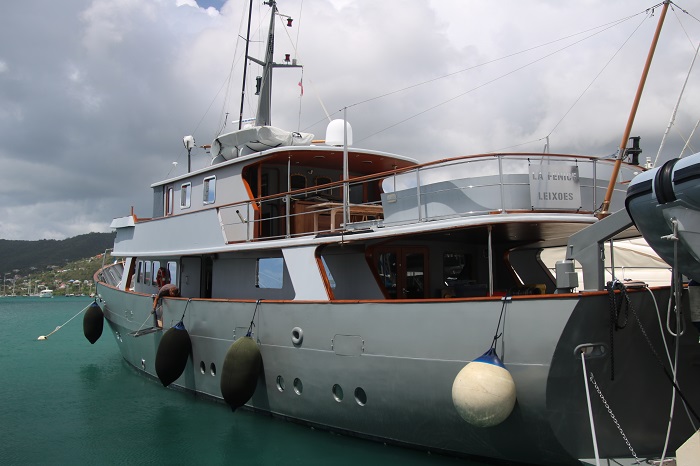 So, that’s about it on the “wow, neat boat” scene here in Le Marin.  Tomorrow Brenda and I are renting a car to tour the island.  Perhaps we will visit a few more rum distilleries.  Yes, that would do nicely.

Yes, it’s plenty windy and with that north swell, we’ll just have to endure Martinique a bit longer.