Oh boy.  Brenda’s potty has malfunctioned and I am stressing out, big time.

As I have mentioned often, because Pandora is a 24v boat, with parts often hard to find, I keep lots of spare parts aboard, just in case.   However, I now know that there is yet another pump that is prone to failure that should have a spare aboard, but don’t.

It’s the “discharge pump” for our Raritan marine “elegance” head.    Believe it or not, this little not-so-elegant wonder has three, count em, three electric pumps and while I have spares for two of the pumps, not the one I need.  And, to make matters worse, it’s not the pump motor that initially failed, it was a tiny seal on the motor shaft that started leaking and flooded the motor with salt water, a decidedly unhealthy combination, to be sure.  I expect that the leak began prior to our trip north but it wasn’t obvious until the motor sat, unused, for the two weeks we were away with the salt doing it’s work.

Oh boy!  The really annoying part of all this is that the part that initially failed is probably worth a few dollars and there is no warning regarding an impending failure until the whole motor is ruined.  It’s a really bad design, to be sure.

As far as “potty chronicals” are concerned, I don’t know if this is common among other members of the “marine Admiralty” but Brenda is particularly sensitive about her “toilet” (say this with a French accent to get the full picture) and she’s not happy, at all as she listens to the roar of the failing pump and watches nasty fluids leak onto the floor when she flushes.

So here I am, ashore at a WiFi spot, working hard to find a source of “potty parts” here in Martinique.  It seems that my best option, after visiting all the possible parts suppliers her in Le Marin is to get it from Island Water World in St Lucia where we will be later in the week.   Wish me luck.

Ok, more than you want to know about “potty” perhaps so I’ll change the subject.

Our trip south from the US on Monday was uneventful and happily our Norwegian Air flight landed on time.  In keeping with a well worn cruising tradition of “planes, trains and automobiles” our journey here was complex, including a  car rental that I canceled when I found a Lyft taxi ride to the airport at the last minute, a flight, Martinique taxi and a friend who was waiting at the marina when we arrived to run me out to Pandora to get my dink.

Oh yeah, I should also mention our experience with clearing customs.  Immigration was swift and the agent didn’t even look up to see if we looked like terrorists and there was no customs at all.  I was told that the customs folks don’t stay late at night.  Isn’t that just so French?  I mention this as we have found this to be so typical of the French islands were checking in can normally be done at a kiosk in a T shirt shop with the payment of a few Euros.   Contrast that to Antigua where you have to go from window to window and back again in a process that can take for ever and cost many times more.   I guess that the French just want you to get on with it so you as the’d prefer that you just move on to buy cigarettes and wine.   Did I mention that it seems like EVERYBODY smokes in the French islands?

It was jolting to leave the cold and grey North East and arrive in humid Martinique a few hours later.  Who knew that you could fly direct to Martinique from Providence RI?  As we took off we flew over Narragansett bay, our local cruising grounds for so many years. 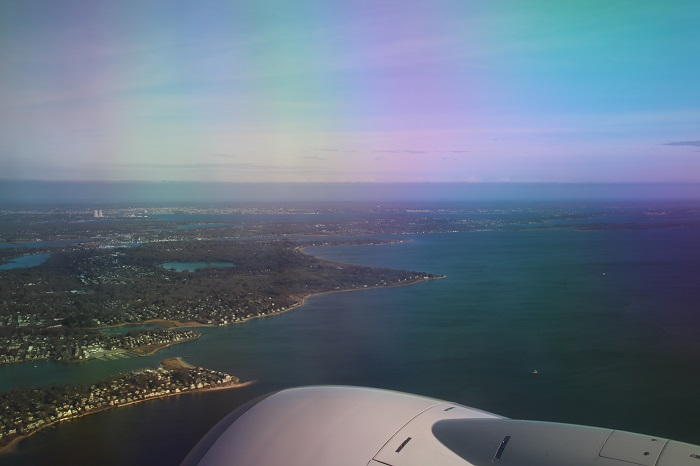 Not a green leaf in sight and every boat was covered in white plastic. 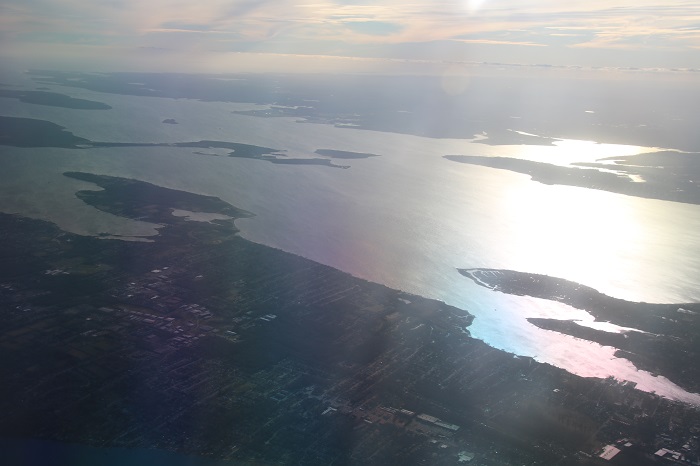 No wonder it’s so dreary in the winter with this thick cloud cover. 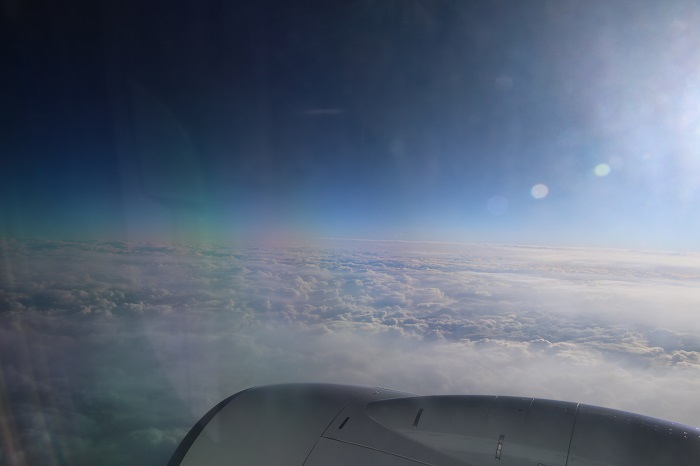 As we winged our way south at over 500kts the sunset was beautiful with the contrasting deep blue of the stratosphere. 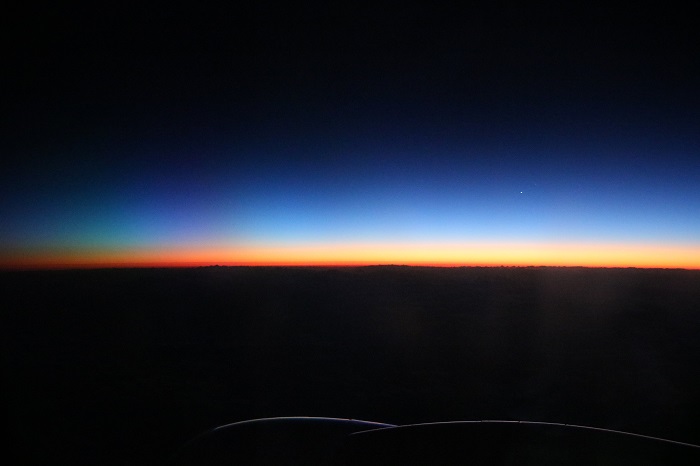 Oh yeah, almost forgot.  We had such a terrific time visiting our family.   Our granddaughter is getting big and somehow just keeps getting cuter and cuter. 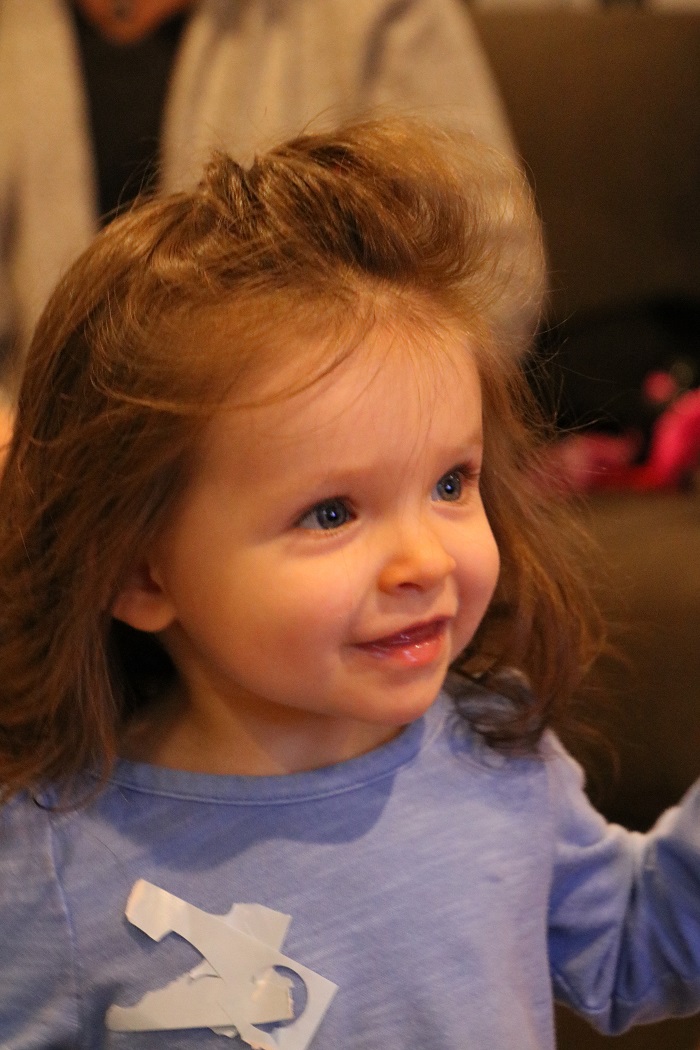 And she loves books.  “Daddy, daddy, hold me on top of your head while I read my favorite.” 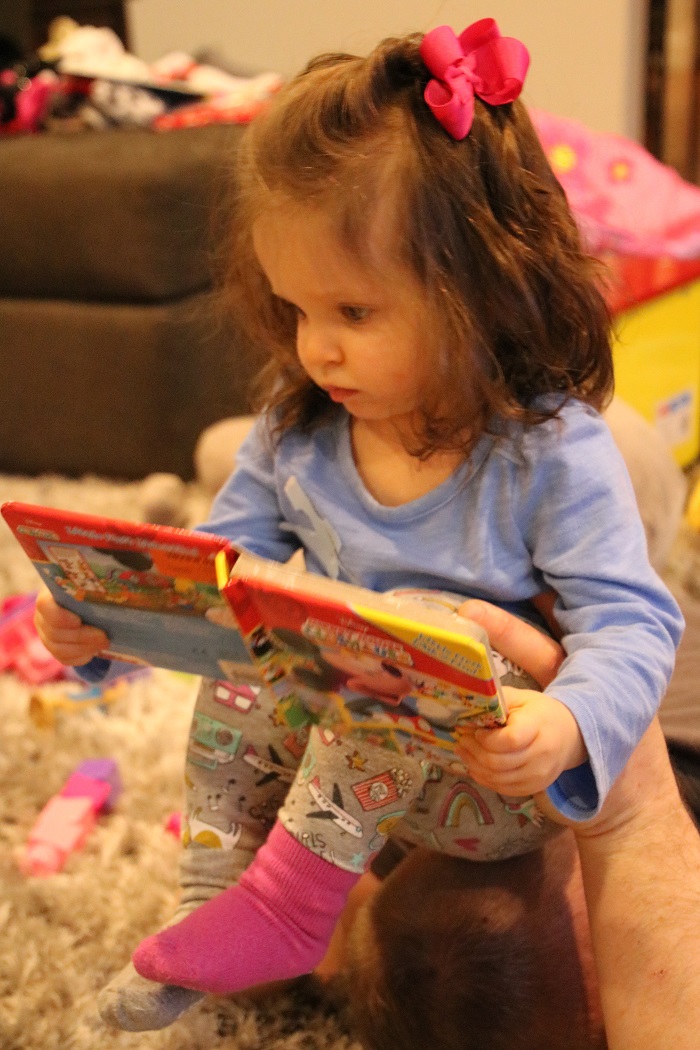 Perhaps I’ll sign off now with a shot of the sunset last night aboard Pandora accompanied by some great cheese, a fresh baguette and of course, a nice bottle of French wine.    No, not the best shot but, trust me, it was a beautiful evening. 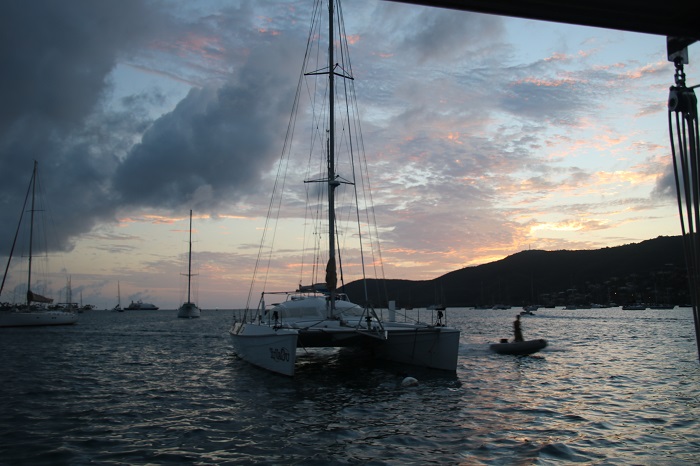 I am worried that the good times may come to a screeching halt if I can’t find a way to put the Pandora’s “potty chronicles” behind me.  Wish me luck.