Watching out for Seasonal affective disorder

It’s a dreary day (the weather not family) here in MD where Brenda and I are visiting.   I have spent the last few days helping our son Rob with a remodeling job in the basement, which has been fun but we will be heading north to CT tomorrow.  After a few more days there back to Martinique on the 5th and then south, with Pandora, toward Grenada before heading back to Antigua in April.

Even though I have been back north for more than a week now, it’s still a jolt to wake up each morning to cold and winter dreary verses sunny and balmy, the conditions that I have gotten used to down in the islands.   I prefer this sort of view to grey and rainy, that’s for sure. 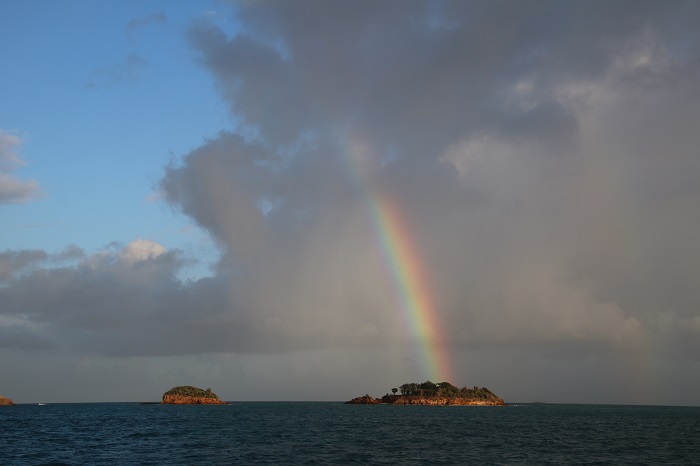 After much back and forth discussion we have decided that I will bring Pandora home for the summer as I have plenty to do before I take her back to Antigua again next November.  In particular, I am considering the addition of a wind generator.

I actually have plenty of solar on Pandora but as we have gone further south I have found that the 600 watts hasn’t been quite enough when we are anchored in the lee of some of the more mountainous islands.   You can see below the four 85w panels as well as the single 300w panel over the davits totaling 600w.

In Antigua, where the maximum elevation is something like 1,300′ it doesn’t have much of an effect on clouds and precipitation with most clouds being small and moving over us fairly quickly.   However, as you journey further south through the Windward islands, such as Martinique, the mountains are three times higher and the mountain tops are constantly covered with clouds. 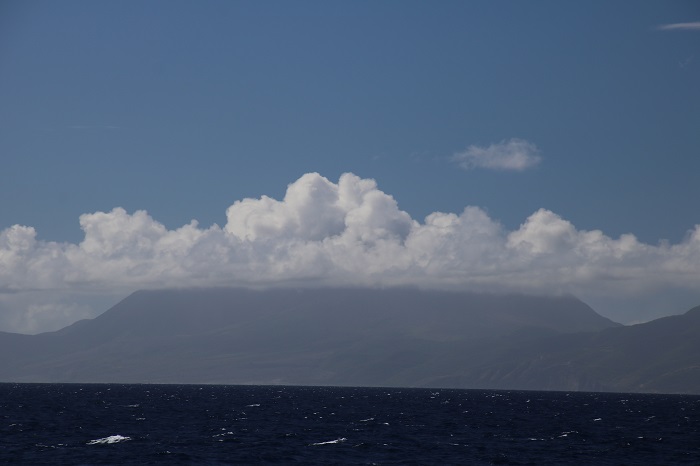 These clouds form over the peaks and run off to the leeward side of the islands causing there to be more cloud cover and showers than the islands with lower elevations.

It’s remarkable how much of an effect this has on production from the panels.    Besides, there is nearly always wind so even if a wind generator was only putting out a modest number of amps, the fact that it’s happening nearly 24/7 means that the amount of power can really add up.   In full sun, between say 10:00 and 14:00, the panels peak at about 30 amps although this quickly drops off to between 10-15 amps, or less, when it gets cloudy,  This isn’t not enough power to keep things up to snuff when it’s cloudy which has been a bit of an eye opener for me.

So, I am going to consider a wind generator over the summer.  I have also been talking to Hamilton Ferris about their new towable water generator and they have expressed interest in my doing a test for the unit so that they can see how it works in actual field conditions over a long run.  Well, we will see if they come through on that.

Our largest energy user at anchor or underway is the fridge which burns 30A when it’s running.  I have a hour meter on the unit so I know that it generally runs for 2.2 to 2.5hrs/24hrs, which adds up to about 70-75AH/24hrs.   Half of my total consumption or more at anchor.  There is one particular unit on the market, made by Technautics that is a lot more energy efficient, so I’ll have to see what’s involved in switching out to those compressors.  I don’t know why this unit is better from a tech standpoint but I put one in my last boat and it was a lot more efficient, drawing less than 5A when it was running.  As it’s a smaller compressor it will run a lot longer as the fridge and freezer are larger and the holding plates are bigger too.   I guess I’ll have to do an audit and talk to the manufacturer about it when I get home. 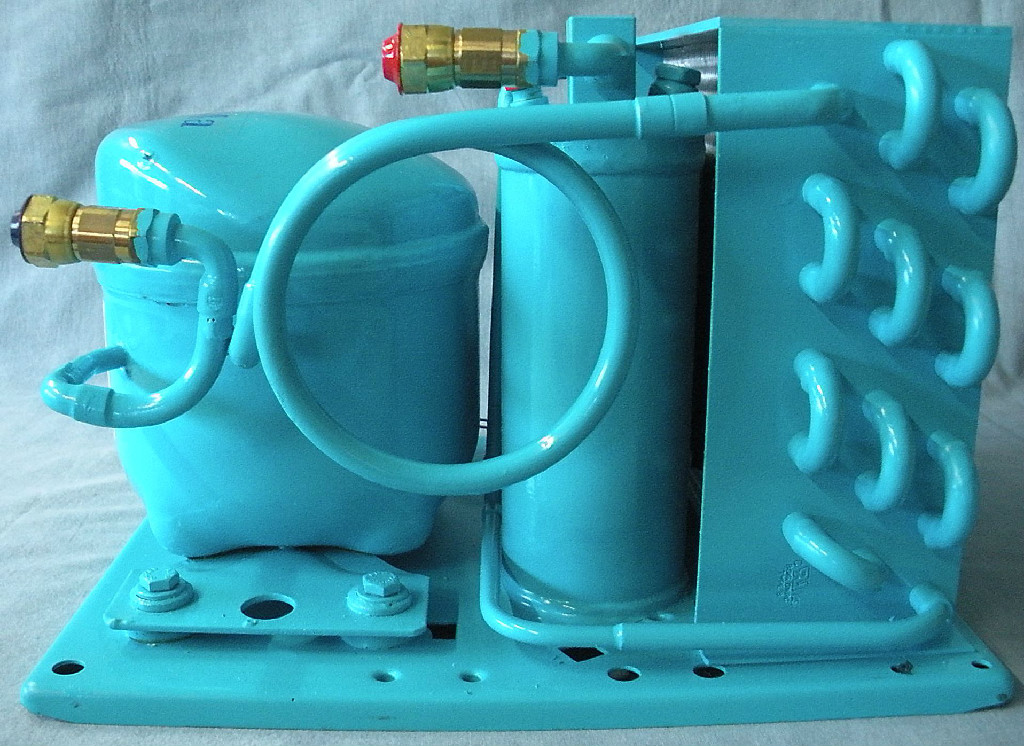 One way or the other, It’l cost a lot as we have two zones which means I’ll have to put in two separate units, a significant expense, even if I can us the same cold plates.   However, an added benefit is that the new compressors are nearly silent and the current one is really loud.  Additionally, the new unit will be air cooled which means that the risk of water pump failure is eliminated.  And, it’s failed already at least once since I have owned the boat.  I just loved cleaning out the freezer and maggot ridden spoiled food.  Yum!

As much energy as we use at anchor, our “under way” consumption is a LOT higher at perhaps as high as 400-450AH/24hrs, which is an alarming number and perhaps right based on my experience with the two plotters, instruments and autopilot on all the time.    As near as I can estimate, we generate perhaps as much as 150AH/24hrs at anchor and less than 100AH/24hrs under way.

We generate less underway because of the sails shading the panels.   This is particularly acute in the fall on the run south because the boat is generally on a port tack and headed south (of course).  As the sun rises in the east and runs through the southern part of the sky before setting to the west, this means that the sails, south of the panels in this scenario, block much of the sun.  Of course on the trip north, this is less of a problem with the boat on a starboard tack with sails set on the “northern end” of the boat.

All of this explains why we come up so short each day when we are under way and yet do pretty well at anchor.   One way or the other, I’d like to do something to improve our output when we are at anchor as well as underway so there’s lots to do to figure this out.

But, all those decisions are still months away so, for now, I’ll just focus on the coming two-plus months of cruising that remain this season.   So, instead of shots of compressors and water pumps, how about closing with a shot of the Pitons in St Lucia, the remnants of long extinct volcanoes, our next stop on our way south. 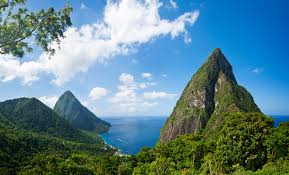 I guess I’ll sign off for now.  The basement job awaits.   Besides, while I’m down there I won’t be reminded of the dreary conditions outside.   I wouldn’t want Seasonal affective disorder to kick in any time soon.

One response to “Watching out for Seasonal affective disorder”