>Pandora’s back in Mystic and, oh, a visit to Nantucket for a wedding.

>Pandora is back in Mystic after a long visit to Maine.  I had planned to bring her back over the Labor Day weekend but hurricane Earle thought better of it so I left and went home to New Jersey.

Getting crew is always difficult as moving the boat is so weather dependent and plans can change quickly.  This year’s return from Maine proved to be more complex than most.  My plan for this year has always been to move Pandora back from Maine around Labor Day and then move her South to Annapolis for a bit of late season sailing.  With the demands of business, yes that pesky day job, I had to put Annapolis on the back burner for this season and instead keep Pandora in Norwalk for the winter.

With my Labor Day run to CT dashed by hurricane warnings, I had to leave her in Rockland for two weeks while we visited Nantucket for the wedding of a friend the following weekend.   I have to say that visiting by ferry from Hyannis was a treat as Brenda and I had not visited the island for over 15 years, mostly because the cost to take a mooring in the harbor is the highest that we had encountered and just more than we have ever been comfortable.  On this visit I was told that the cost was something like $65 a night or more.   Contrast that to Martha’s Vineyard where they run $45 a night, and that’s without any sort of launch service included.  In other areas, like Maine for instance, moorings generally run in the $35 range and sometimes less.

Nantucket is the most remote island you will run into within a modest distance of major cities on the Mid Atlantic and North East coast and, to me, it has a flavor that is a bit more sophisticated than the other islands I have visited in the area.   One point of interest on the island, worth noting, is the Nantucket Whaling Museum.

I won’t say much about the museum except to say that it has a very impressive collection chronicling the history of the island and a lot of care has gone into putting the history of commercial whaling in context with the times.  The collection represents many cultures given the many places that whalers visited on their voyages.  A particularly impressive display is the skeleton of a whale hanging from the ceiling in the main hall salvaged from a dead whale that washed up on the Nantucket shore years ago.   It’s beautifully lit and displayed as you can see below. 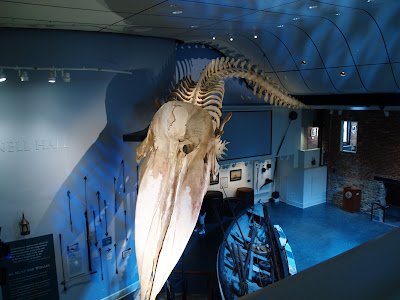 And there is always the wonderful Brant Point Light, at the entrance to the harbor.   Who can resist the alure of the Rainbow Fleet of colorful Beetle Cat boats parading by this light?   Brenda and I served on the “steering committee” of the Catboat Association for many years so these wonderful little boats will always hold a special place in our heart. 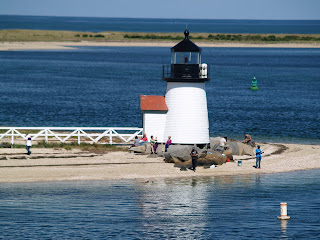 Well, we had a great time in Nantucket and I have to say that the ferry from Hyannis and back was trouble free and very comfortable.  We won’t talk about the hours and hours that we drove to get from home to the Cape and back.  They even offer free WI-FI for passengers.

With the wedding weekend behind us I again turned my attention to finding yet another crew to bring Pandora back from Maine.  As the weeks ticked by the weather was only getting colder up in Maine and I was anxious to get the delivery over with.

It’s hard to find friends that have flexible schedules and the ability to leave for a trip with just a few days notice.  Beyond that, a trip to CT from Maine is “up hill” and against the prevailing winds, something that isn’t that appealing to most boaters.

I have made the run from Maine to CT many times over the 15 years that we have sailed in Maine and at the end of a long and wonderful season, and planning what is often an uncomfortable run can be stressful.  However, this trip proved to be much more pleasant than usual.

While sailors always prefer to, well, sail but that’s not normally the case when you have to go toward where the prevailing winds generally blow from.  In the North East that’s generally from the South West.

In this case we got lucky and a front passing through the area brought North winds to help us get home without a fuss.   While we still had to motor nearly the entire way, 33 hours actually with a few hours of late afternoon sailing in Buzzard’s Bay, the trip was uneventful and thankfully, the wind was on our stern, if a bit light.

With a half moon and clear skies, we were treated to a fabulous view of the stars and a fair number of shooting stars.  It’s remarkable how clear the night sky is when you are away from the light of big cities.  At 1:30 on Saturday morning and 25 miles off of Boston, the light of the city was a just a red smudge on the Western sky.   With nothing obscure the night sky after the moon set at 1:30am, the view was breath taking.

The run from Rockland to the Canal takes about 24 hours so we would be out over night for our run South.  We left Rockland harbor at 4pm on Friday and picked up the mooring in Mystic at 2am Sunday.  And that’s without stopping along the way.  Picking our way up the Mystic River in the dark was a bit of a challenge but we did it with a minimum of fuss.

There is always the hope that we will see whales along the way and this run didn’t disappoint.   A few finback whales, nearly 30 feet in length, came very close to Pandora.  They are beautiful and graceful animals.

Now that Pandora is in Mystic I will take this weekend off to do some chores around the house and then head out for one last weekend with some friends when I bring her to Norwalk and her home for the Winter.

Alas, a great season of sailing is coming to an end.   Hopefully, our 2011 season will again take us to Maine and South to Annapolis.  All and all, a great season on the water aboard Pandora for me and Brenda.