Where the French and English duked it out.

We are here in Iles de Saintes, a small archipelago here just south of  Guadeloupe.   It’s fascinating to visit some of these islands where countries battled it out years ago to control those islands that were valuable, mostly because of sugar production, and because they had good ports where ships could call home.

Les Saintes are such a group of islands.   As they are low lying and dry, I expect that the appeal wasn’t agriculture but as a place to control shipping.   And, as is so often the case in these parts, this island saw much action as the English and French fought for control time and time again.

As you’d expect wherever there is warfare, there are forts and this place has a number of them with the largest, now a terrific museum. 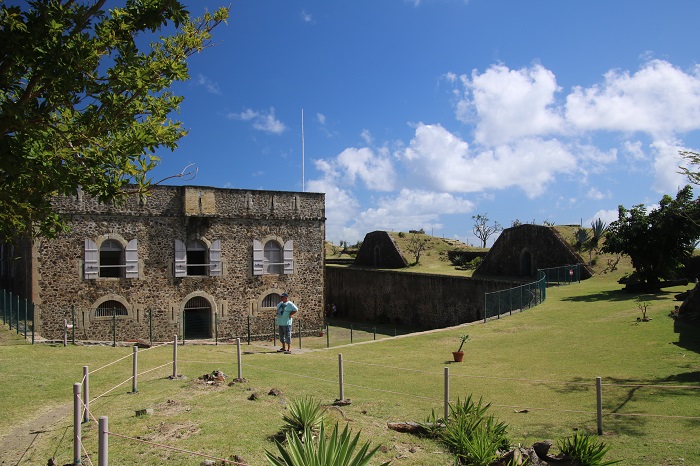 It would be tough to sneak up on a garrison with such a commanding view. 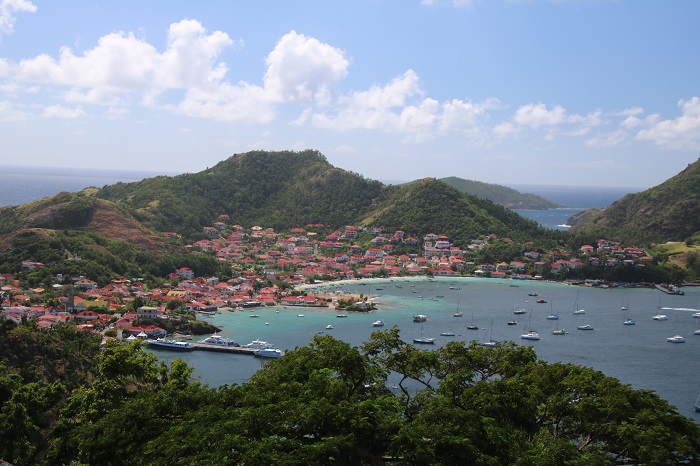 And, with such a large harbor, comes the need to control it and at least once a large battle with dozens of ships fought for control in what is known as the
“battle of the Saintes”.   This diorama showed all the ships that fought.  This is only a detail shot but it’s sufficient to say that there were a lot of ships banging away at each other. 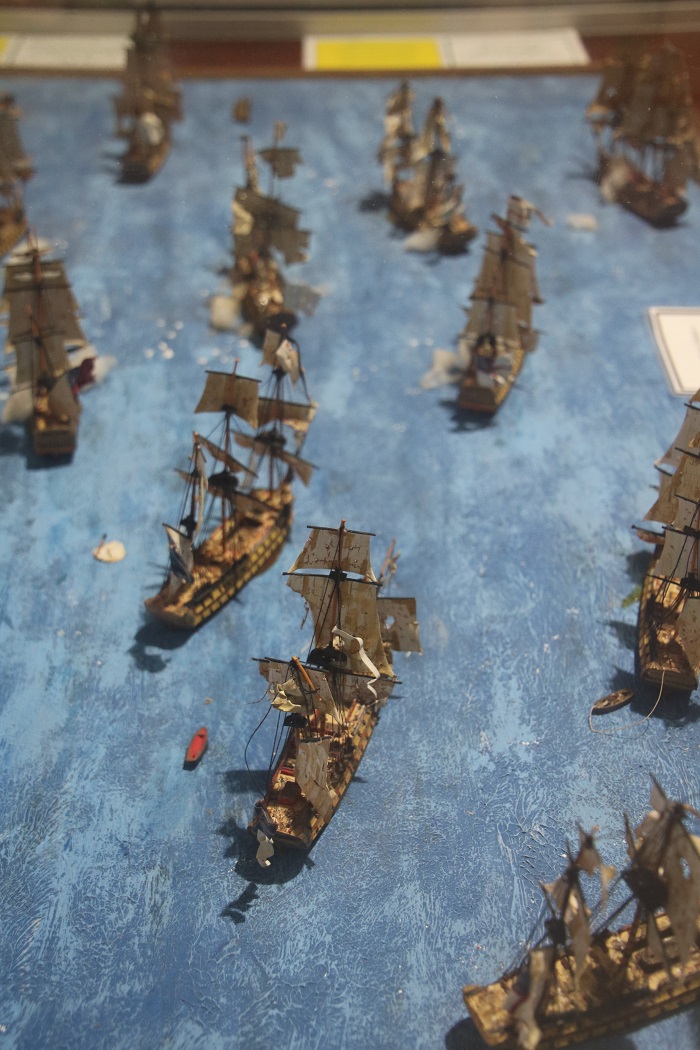 The museum has a number of very nice large scale models including this one of the 90 gun flagship, The Formidable, launched in England in 1777 after a ten year build.  Interestingly, it wasn’t dismantled until the early 1800s.   That’s a long career for a wooden fighting ship. 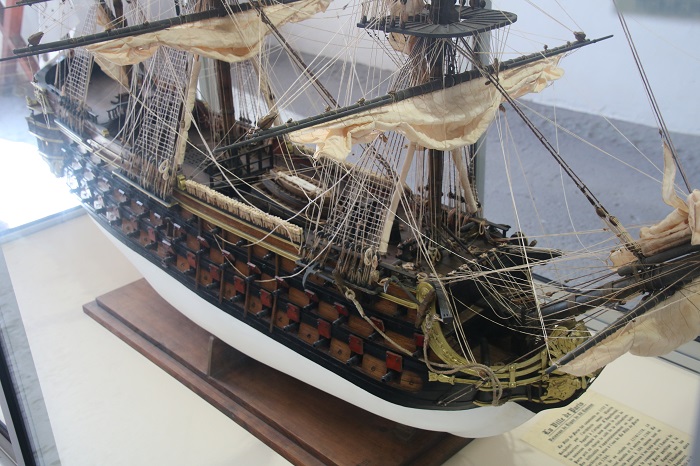 The model is nearly 5′ long.   Impressive. 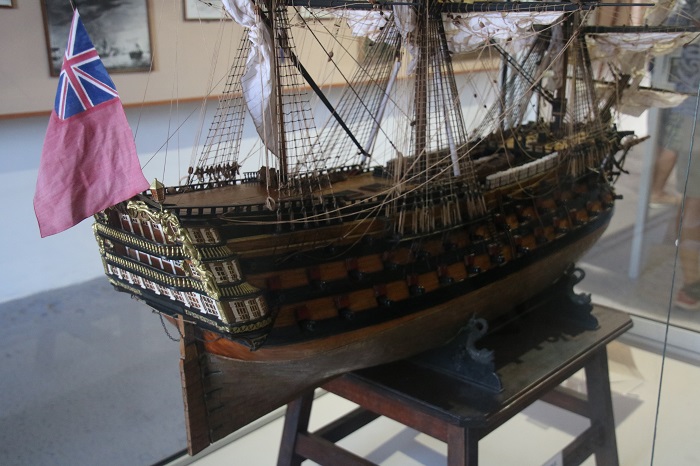 Interestingly, there was also a model of the Santa Maria, Columbus’s ship.   Oops, the description of why it was in the museum was in French. 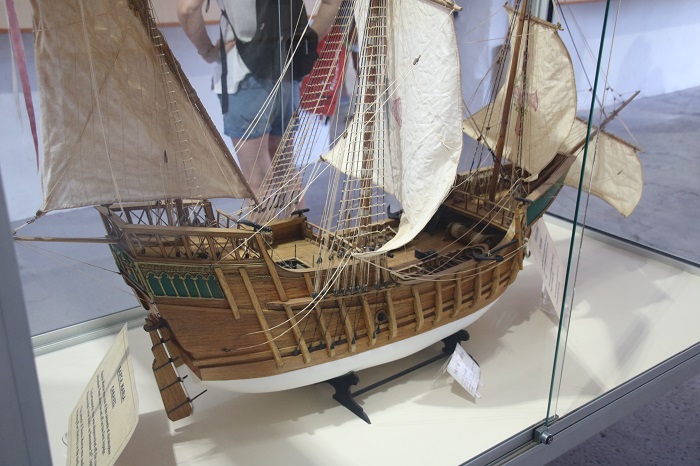 And, speaking of nice views, which I was earlier in the post.  Nice spot to have our picture taken. 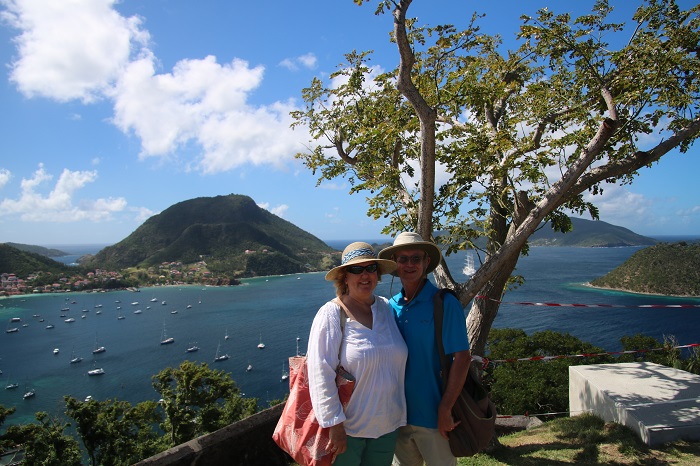 The fort is in amazing shape after all these years.   It’s remarkable to see how flawless the walls are.  Not a wave or ripple.   Perfect construction. 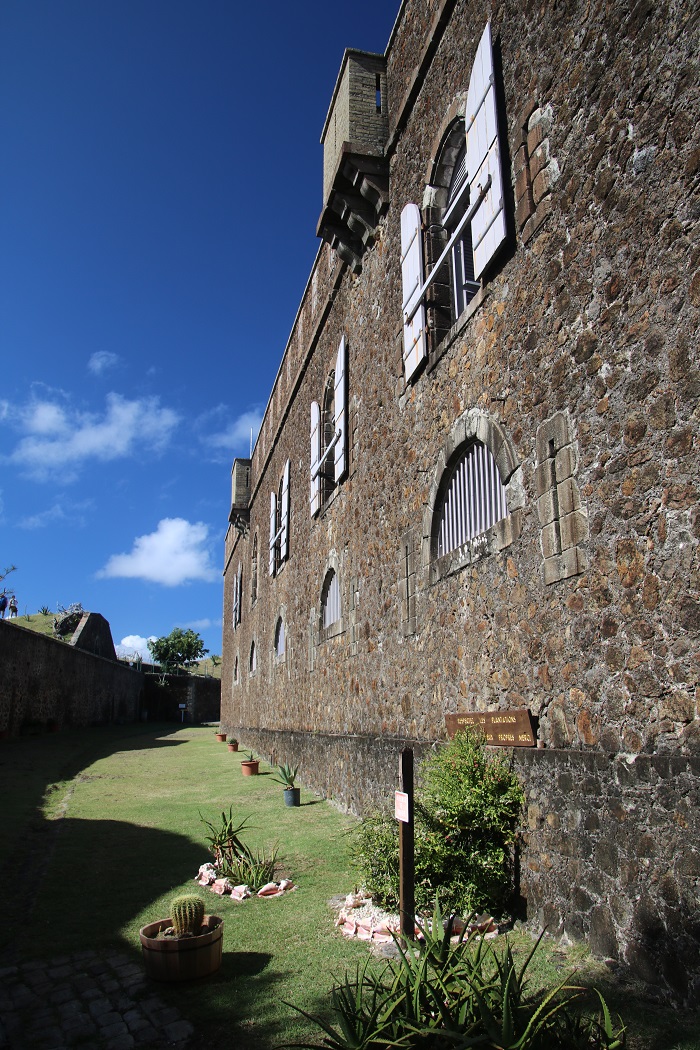 These large iguanas were in the nearby trees everywhere.  They are very territorial and this big guy was standing his ground in spite of our invasion of his space. 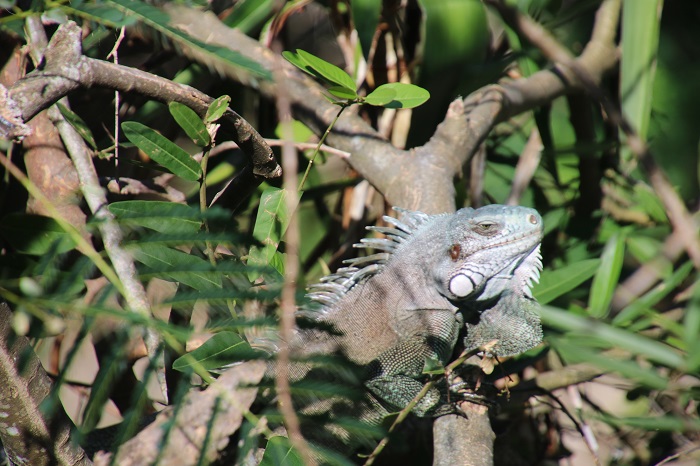 Another bit of local fauna, a kestrel, I think. 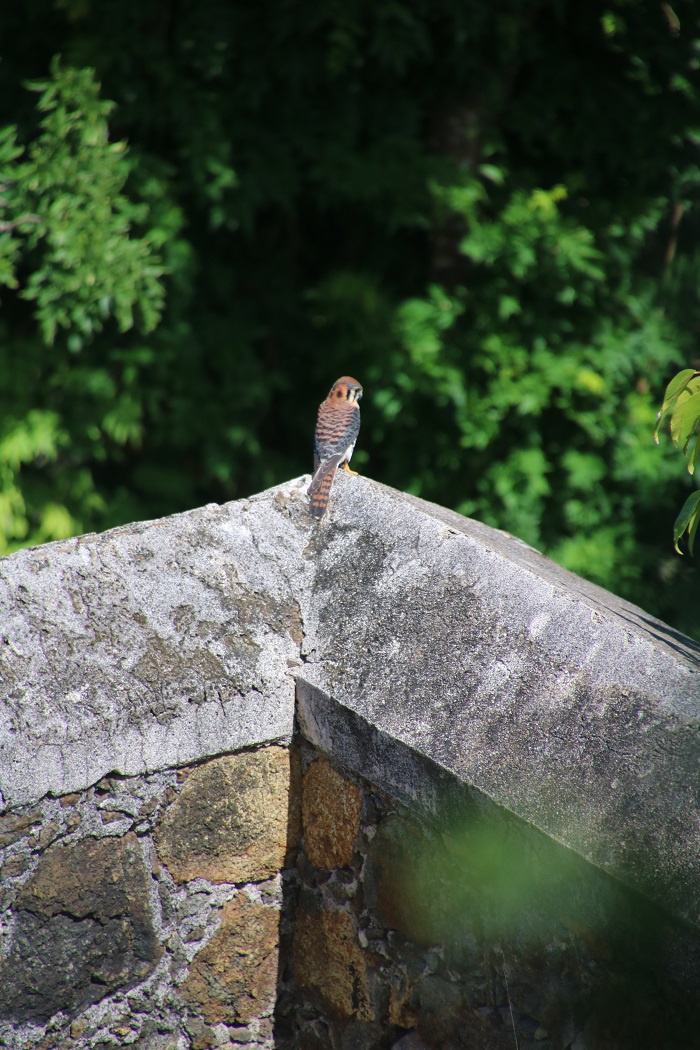 And, of course, goats.  Always lots of goats.  In this case, baby goats, goatettes, or goatees.   Hmm… 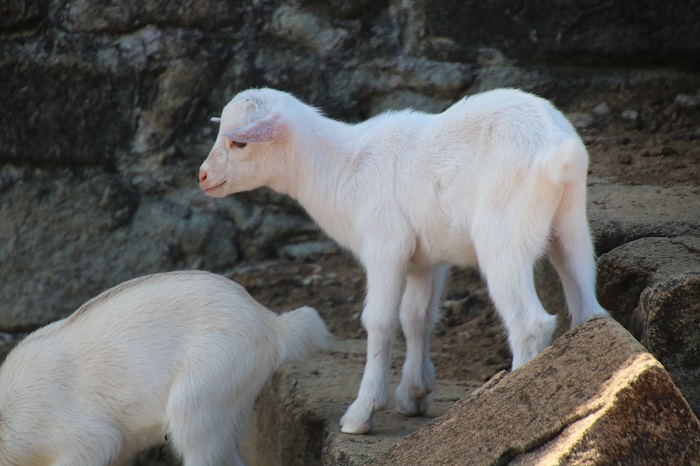 Down in the main town there was a great little parade.   Drums and all sorts of percussion.  All the marchers were probably nearly deaf after the event was over. 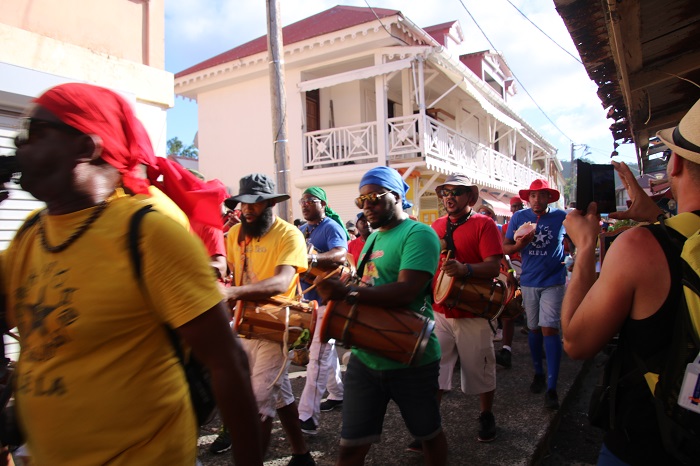 Brenda and I loved this little household garden. 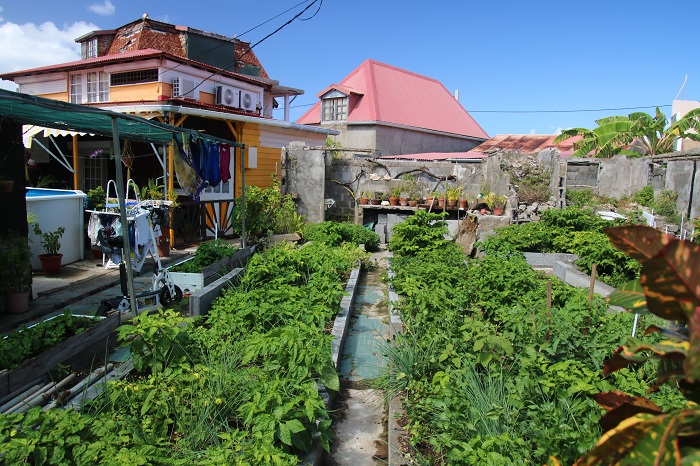 I also enjoyed watching these guys “launch” a boat, freshly painted.  They walked briskly along, stopping every 100′ or so for a break.   “Stop, stop Francois, time for a cigarette break.  We are French after all.”  Looks heavy. 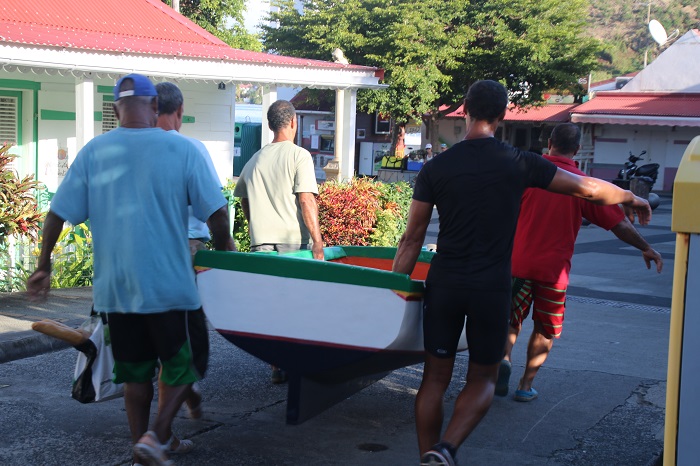 Along the way (we rented a golf cart for the day) we stopped at a “beach bar” for lunch.   How about tuna ceviche and wine at a lowly beach bar?  Only in a French Island!  Bon appetite!  Indeed. 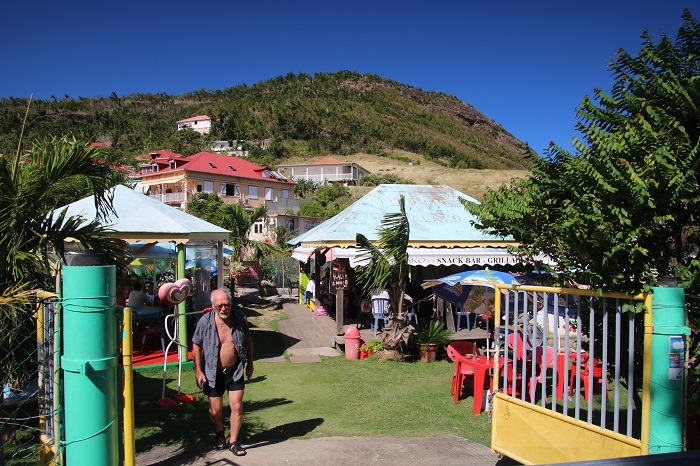 So, there you have it.  Another post of random thoughts from the Caribbean.

Great food, lovely Caribbean breezes.     I have to say that I am glad that the French persevered here as somehow I don’t think that the food would be quite as good if the English had won.

And, on top of that, clearing in would be ten times harder and cost more.

Tomorrow, off to Dominica and on to  Martinique.   Yes, more baguettes in Pandora’s future when we get to Martinique.

2 responses to “Where the French and English duked it out.”