How not to visit St Kitts.

It’s been a while since my last post and since then we visited Nevis and went to Montserrat again, this time aboard Pandora.

When we were in Antigua we decided, as I reported in an earlier post, that we would visit St Kitts and Nevis which was directly down wind from Antigua.   The plan, after that, was to head to Guadeloupe, a long but, we thought, doable trip.

The run from Antigua to Guadeloupe is an easy reach so it seemed to me that the same, if a bit harder on the wind, would be the case from Nevis to Guadeloupe.   NOT!

Unfortunately, after spending a week of fun in spite of an annoying wrap-around swell in both Nevis and St Kitts, we struck out for Montserrat for an overnight stop as that was about half the way to Guadeloupe.  Unfortunately, with the prevailing easterly, the run was more on the wind than I had realized and it put us hard on the wind motor-sailing in some pretty rough conditions.  Brenda was not pleased.

It was quite a rough day.  It’s always frustrating to try and take photos of waves as it never seems to really show what it was like.  Perhaps these two shots of our friends on Oasis, who sailed with us make the point.   Here they are close by us as we made our way to Guadeloupe.  Looks pretty normal? 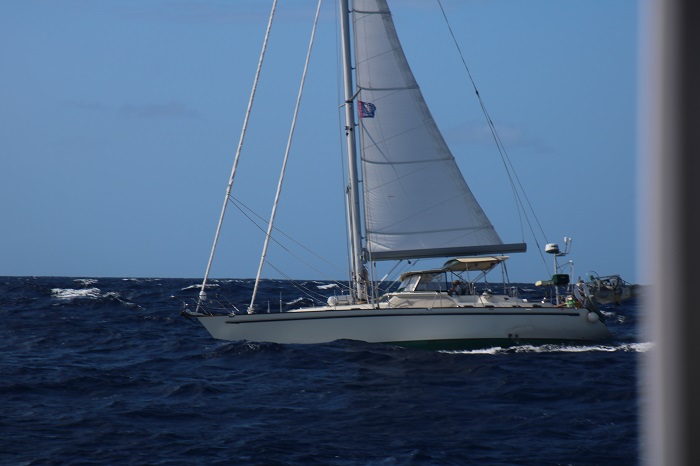 A few moments later as a 10 second swell was between us.   What boat?  Where dey go? 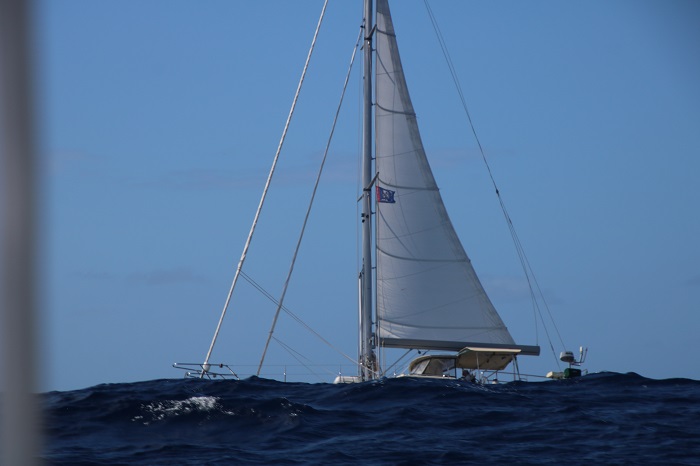 We anchored in the tiny harbor, such as it is, in Montserrat and spent the night pitching back and forth in the swell.  After a day of pounding into the wind and anchoring in a rolly harbor, and all on her birthday, Brenda wasn’t too happy. 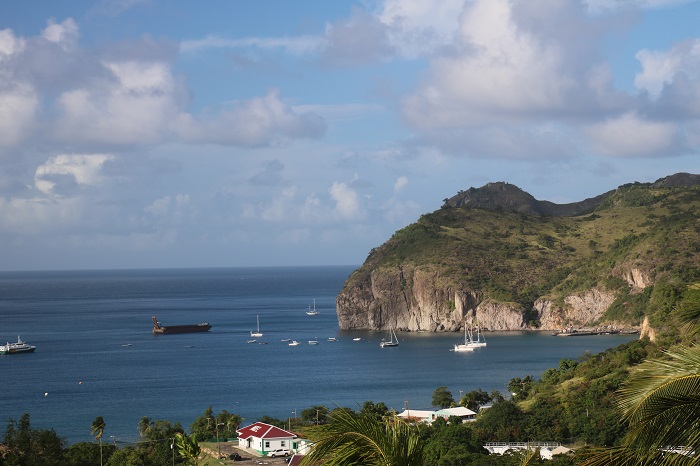 A close up of Pandora anchored.  If it was a video, you’d see the long swell rolling through the anchorage and her mast swaying back and forth 20 degrees side to side. 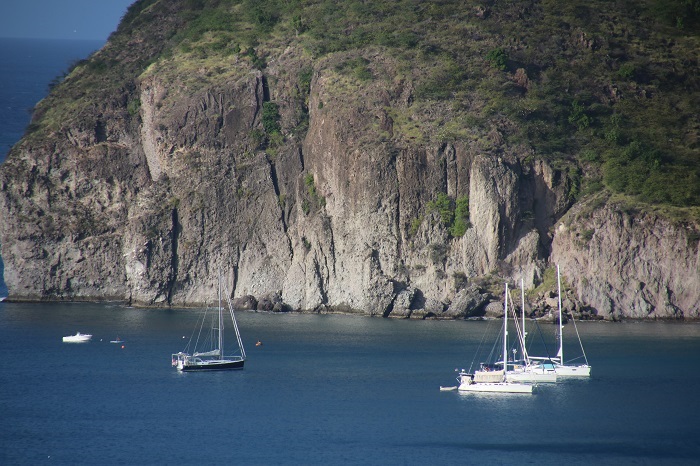 However, swell or not, we were able to go ashore and visit a weaving studio which made her very happy.  Brenda had heard about the studio a while back and this was a destination worth fighting for and there we were.   We hired a taxi and had a terrific visit. 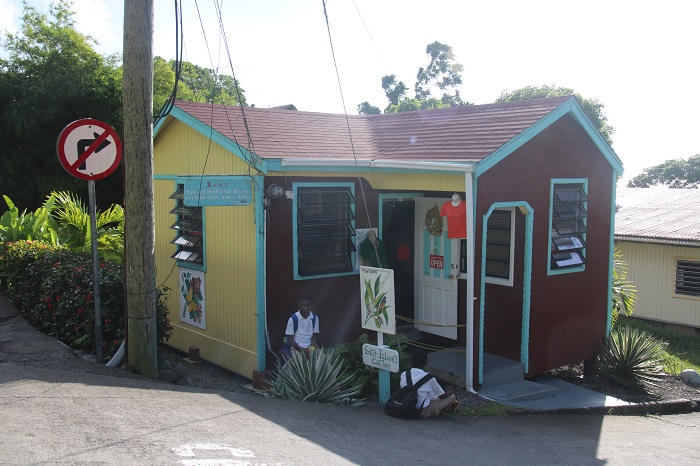 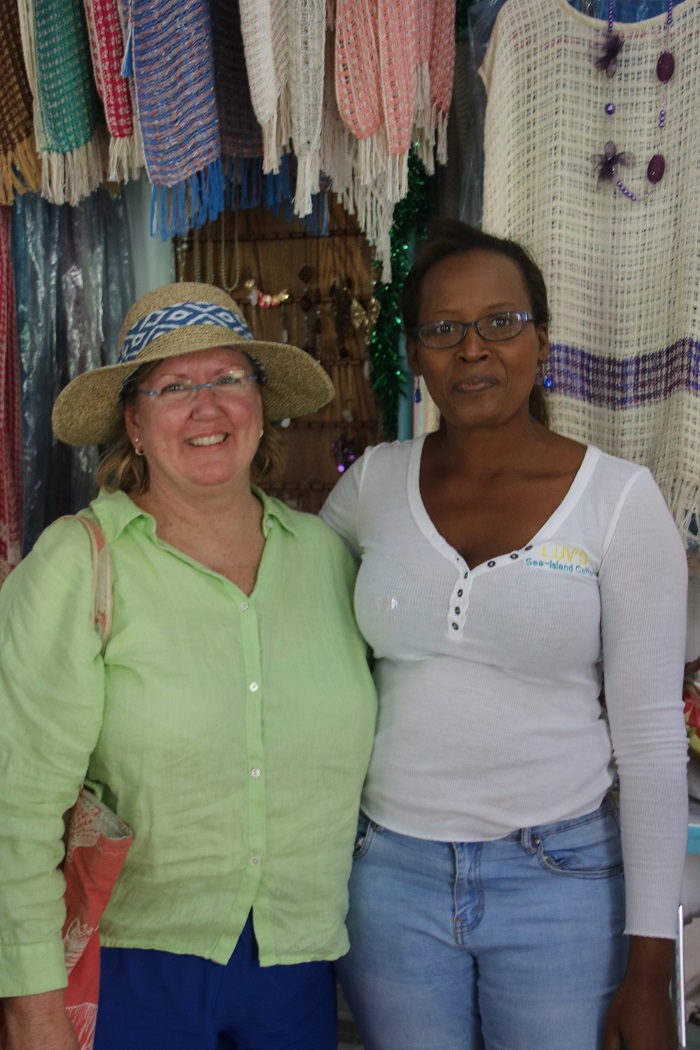 After buying one of just about everything in the studio, we invited the owner and her mother out to Pandora for a glass of wine.   That was fun too, in spite of more rolling around, with our guests, while clutching our wine glasses.  Not a good location for glasses with stems.

Anyway, we slept, sort of, that night and left early the next morning to head the rest of the way to Deshais Guadeloupe, again motorsailing, hard on the wind.

A short distance to the southern end of the island we passed the remains of what was once the capitol of Montserrat before the volcano wiped it out.   Seeing these buildings, once a thriving city, under tons of ash and mud was sobering.   It was hard to see due to the smoke from the still active volcano. 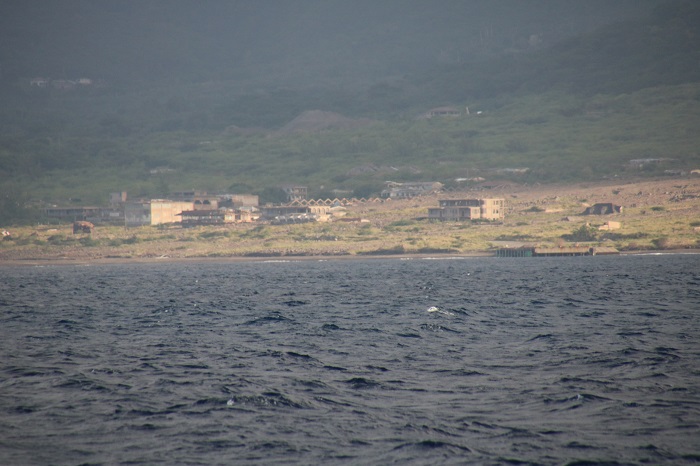 You could see the deep ravines that were carved out when a huge lake that had filled with rainwater for several years following the eruption, finally broke through and thundered to the sea.  I can only imagine what that day must have been like.   Perhaps not as bad as a major volcanic eruption but not fun, even a little bit. 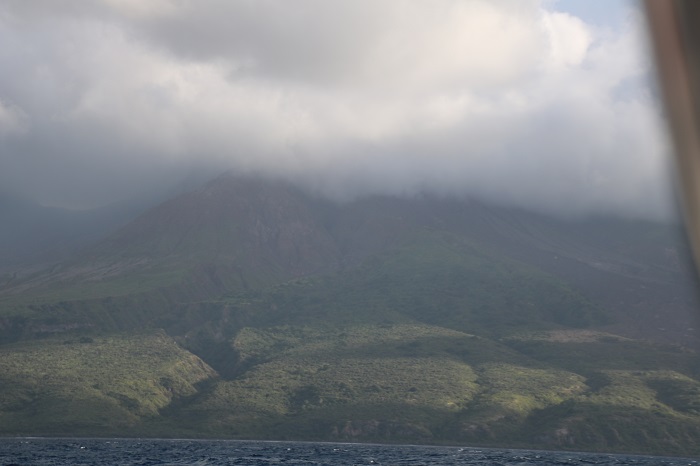 It was two long days to Guadeloupe but we made it and that was two rough days more than Brenda needed, especially as one of the days was her birthday.  Thank goodness for the weaving studio we visited.  I was fearful that she’d jump ship and head for the airport.  Fortunately not.

As we slogged our way to Deshais we were passed by a large sailing ship.  It was an impressive sight as she passed us in the distance. 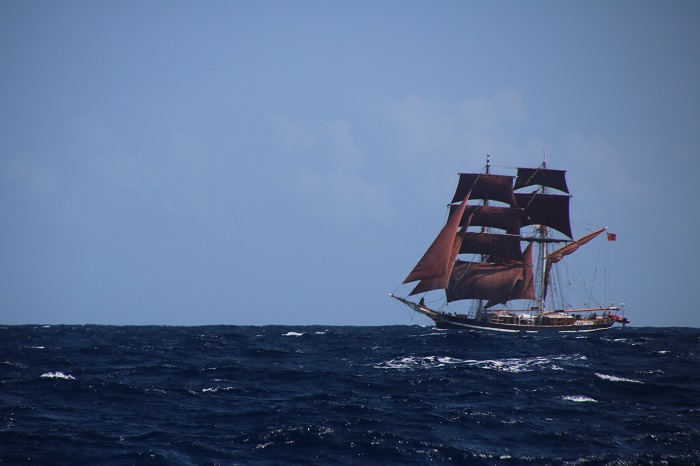 We were happy to relax in Deshais for the evening.  It’s a beautiful fishing village and we were particularly pleased to be back on a French island.  Bring on the food.   We binged on baguettes and cheese.  Yum.    Ok, we also bought some produce too, local of course. 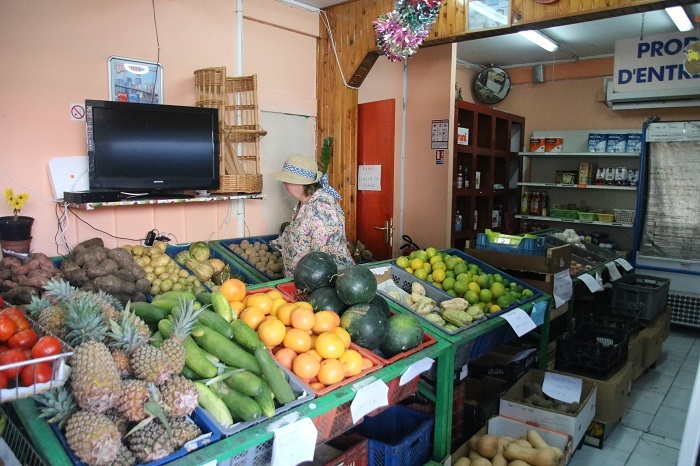 Unlike Antigua and other islands influenced by the UK, the French islands have very easy customs procedures.   Instead of going from window to window or office to office, in Deshais all you had to do was to go to this T shirt shop, fill out a form on a PC, French keyboard of course, and pay four Euros.  Simple.  And you can check in and out at the same time if you know when you are going to depart. 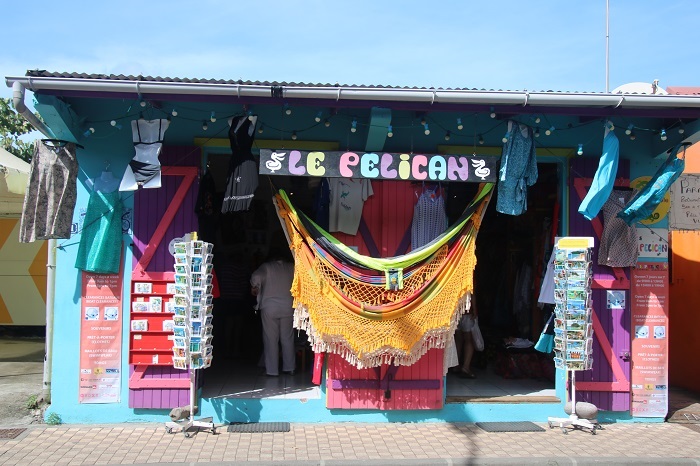 It was very picturesque.   Lots of boats, along with Pandora, out in the harbor. 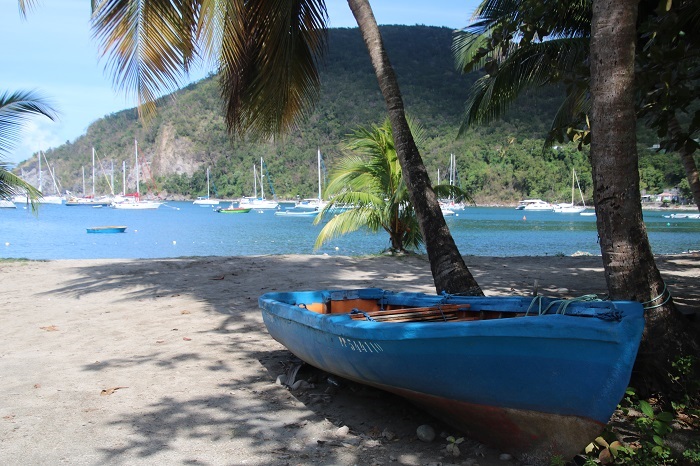 Outside where we had lunch they had a charming bird feeder that was very popular with the locals. 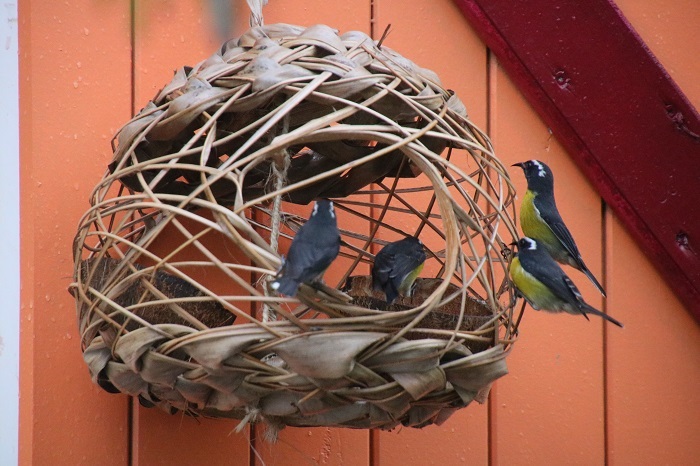 So, now we are here now in Les Saintes, also part of Guadeloupe, where we will stay for a while, perhaps through next week before heading south to Martinique, French again.  There are wonderful places to dine and the food is great. 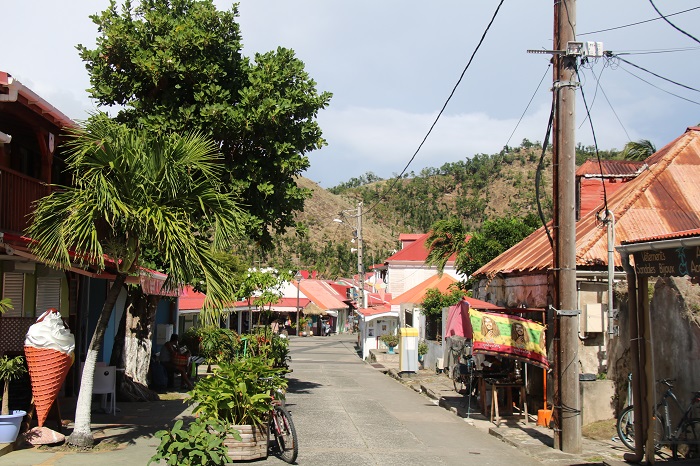 As I write this post I am sitting in a cafe overlooking the main town square.    A lovely view. 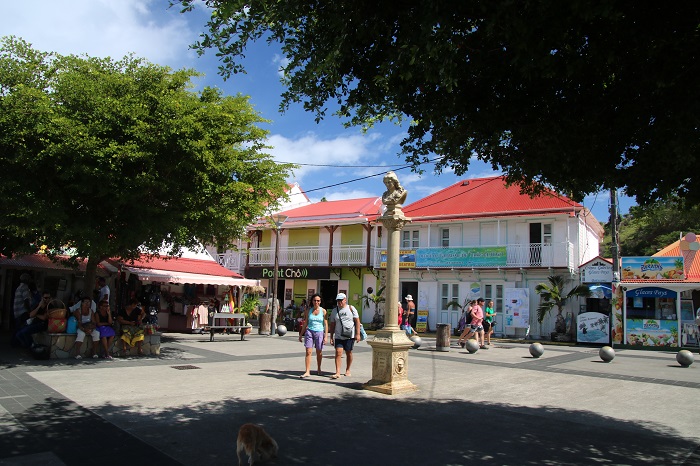 From downstairs, you can look out and see Pandora on her mooring nearby.   that’s her, with the dark hull.  Not the best shot but you get the point, I hope.  Very close. 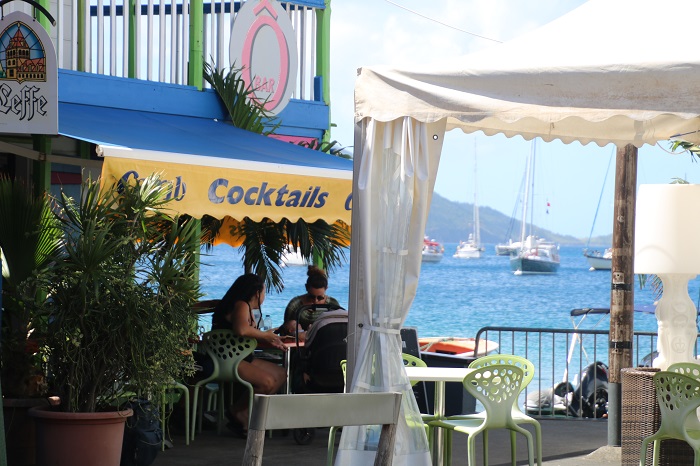 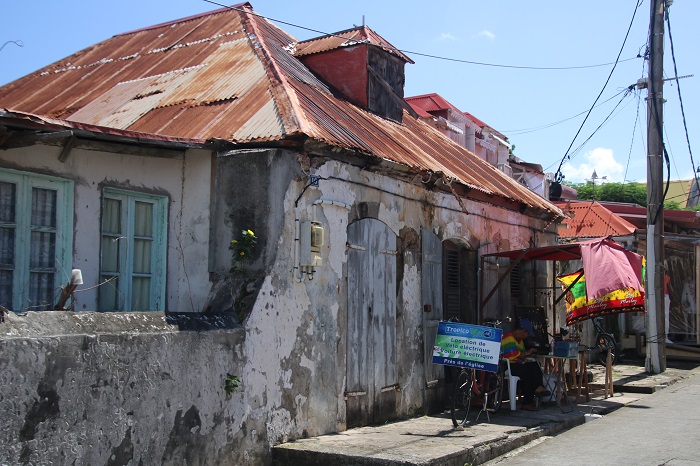 So, here we are for a while and tonight we head to a friend’s boat for cocktails.  It’s amazing that everywhere we go there are always boats that we know.    Could be worse, we could be in sub-zero temps.

I prefer this.   However, all is not always easy as our trip to Nevis showed, there’s a good and bad way to do everything and now we know how NOT to visit St Kitts.

One response to “How not to visit St Kitts.”