Since my last post we moved Pandora back from the eastern Penobscot Bay toward Rockland and Camden.   Along the way we enjoyed visiting Merchant Row near Stonington, the home of one of the last operating granite quarries in Maine.  In the 1800s granite was a major building product, prior to the widespread use of concrete as a building material.  This shot is of a very active quarry, one that seems even more active than when we began cruising in Maine nearly 15 years ago.  You can really get a feel for the scale of the operation.  It’s interesting how smooth the cuts are and how massive the blocks are. 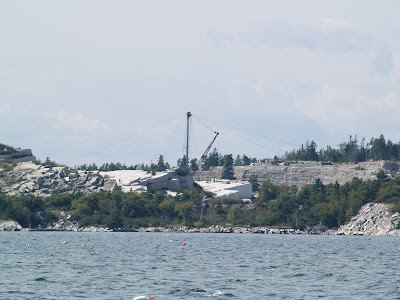 This area of Maine is dotted with small granite outcroppings and navigating among the islands can be tricky, especially in the fog.  Fortunately, this day was chrystal clear and sunny.  This shot of the chart plotter gives a good feel for just how “interesting” navigating in Merchant Row is at 7.5kts. 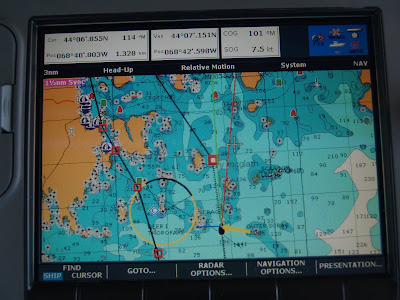 Note that the island in the upper left hand part of the display is Crotch Island, the one with the “crotch” in the middle of it, the granite quarry that is in the photo above.  The actual quarry is the Deer Isle Granite Quarry.  Their site shows that they sell small items for the home and it’s hard to believe that they don’t sell bigger pieces given the scale of the operation.    It would be fun to have kitchen counters from an area that we love.   I guess that even big chunks of granite are sometimes destined to become small trivets.  Not a very noble end for a magnificent island.  Go figure.  All of the islands in this area are made up of unbroken granite and are quite beautiful.

Granite isn’t the only industry in Merchant Row.  This mussel “farm” is anchored off of a small island where the ever present currents keep the “crop” fresh and sweet.  When you purchase wild mussels in a grocery it’s likely that they came from a place like this.  By suspending them in water above the bottom they never get grit inside which makes them taste even better.   We have dug them ourselves and it takes lots of washing to be sure that you won’t get a mouth full of grit. 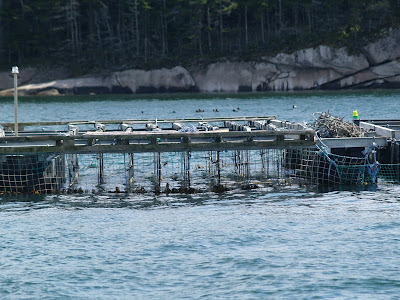 There’s another new industry cropping up in Maine, and elsewhere in the US, and that’s wind power.  These three massive towers are the first on the Maine coast and generate enough power to supply the electrical needs of Vineyard Haven with enough left over to sell back into the power grid.  Some hate the look of wind generators but I think that they are wonderful.  To see these monsters slowly churning away is quite a site to behold.   Pandora is also fairly “green” with nearly all of our power coming from solar panels. When Pandora was launched in April we turned on the freezer and it’s been on all summer.  I can leave the Pandora at anchor for days, or weeks, at a time and never need to use the engine or generator to charge the batteries.  The solar panels put out a great deal of power, sometimes nearly 30 amps at their peak in the middle of the day. 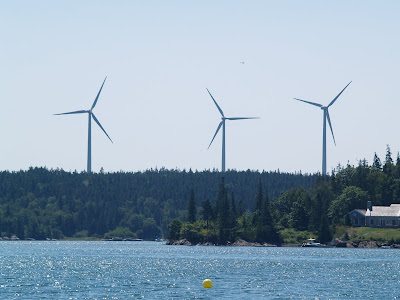 Back when schooners were the primary mode of transport in Maine, especially for heavy cargo like granite, the primary “trucks” of the day were the coasting schooners.   Today they take human cargo out for day and week long trips.  Merchant Row is a favorite stomping ground for the “dude schooners” and to me this is one of grandest of the schooners.  While I am not positive, I think that this one is “Heritage”, a wonderful schooner with really sweet lines. 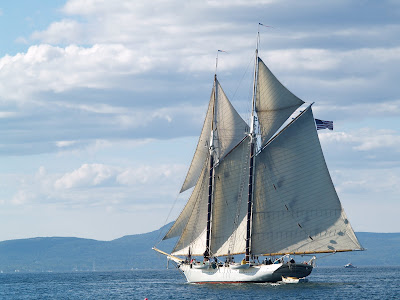 Views like this are fairly common place in Maine and this one with the Camden Hills in the background are particularly scenic.  If you want to spend time on a Maine schooner, you can book here.

As I write this I am back in New Jersey, courtesy of Hurricane Earl.  My plan was to bring Pandora back to Mystic from Maine over the Labor Day weekend but alas, she’s on a mooring in Rockland riding out the storm and I am in New Jersey.  It doesn’t look like Earl will be much of a threat in Maine after all with most of the strong winds coming from the North West. This means that wind driven waves won’t be a problem as the winds will be coming off of the land and there won’t be an opportunity for big seas to develop in the harbor.  While wind can wreck boats, it’s big seas that tend to be the worst culprit.

As for getting Pandora back from Maine, as soon as the winds and seas get back to normal I will head back to Rockland with crew to bring Pandora home.  While I was planning to head down to Annapolis again for some late Fall Sailing, I think that I will just pull her out in CT and begin thinking about the 2011 season.   Work is a bit too busy and now with the delay in getting back to Mystic, I don’t think that Annapolis is in the cards.  Perhaps next year.

All and all, we spent about six weeks sailing in Maine where I was able to keep working a full week and still enjoy the sailing life.

Forgive me but I can’t help myself as I close this post with yet another magnificent Maine sunset.  Pretty impressive, right?  Brenda and I think so and plan to make the summer of 2011 our 15th visit to Maine. 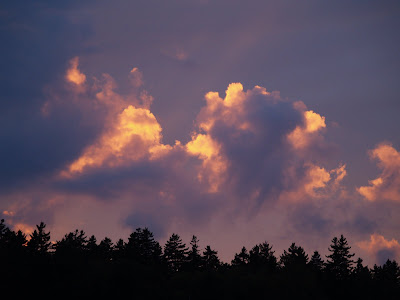