Preparing for the Royal Visit

Now, there’s a title that I never thought I’d be using in a post.  Let me explain.

As I prepared for the Salty Dawg Fleet to visit Antigua I reached out to many contacts here in Antigua about marina visits, special events and shopping.  Along the way I spoke with Ann-Marie Martin, the commissioner of parks.  She oversees, along with other areas here in Antigua, Nelson’s Dockyard, historic home to the British Navy,  now restored as a very popular spot for visiting yachts to tie up for a visit.

I had been trying to connect with her for several days since I arrived with Pandora but had not had any luck in setting up a time for us to meet.  Finally, after stopping at her office yesterday I received an e-mail from her apologizing for not being available as she was “really busy preparing for the Royal Visit”.  Royal visit, you say?   Indeed.

It seems that Prince Charles is arriving in Antigua today and will tour, among other sites, Barbuda and Dominica, two nearby islands that were devastated by last summer’s hurricanes.   I have been told by those in the know, that he will be touring the dockyard on Sunday afternoon.  We don’t know the exact time but it would be fun to catch a glimpse, that’s for sure.  I guess you’ll have to stay tuned to learn more.

The last few days since arriving have been really hectic for me, as well as those preparing for Charles.  However, things have come together nicely and we have already had a number of fun events and there’s something going on nearly every day through next Thursday, Thanksgiving, when Brenda and I fly back to the US for the holidays.

Our “official” venue has been the lawn at the Admiral’s Inn overlooking English Harbor and we have had wonderful evenings there already.  Here’s a group shot from last evening’s party.   It’s a pretty good group in spite of only half of the fleet having arrived. 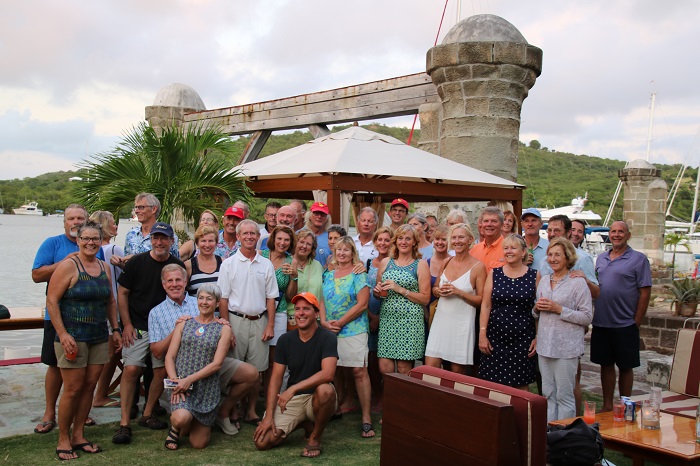 Mike, from the Antigua and Barbuda Royal Navy Tot Club spoke to the group and has invited all of us to participate in one of their ceremonies, held tonight in the dockyard.  Stay tuned for more on that in a future post. 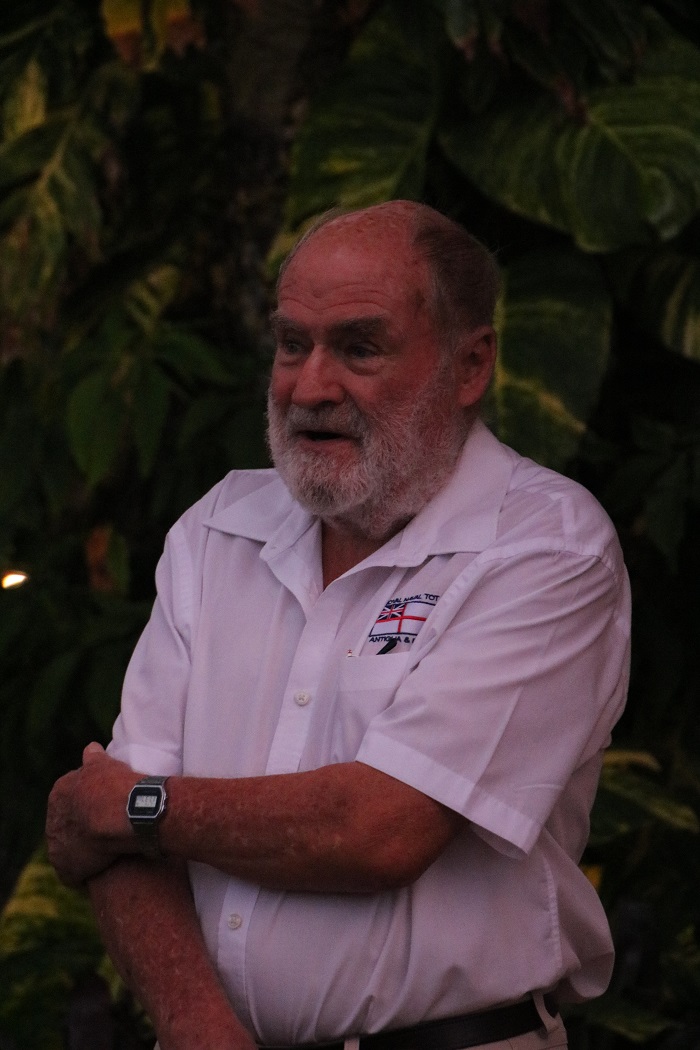 The Admiral’s Inn is in a lovely setting set among the ruins of an old sail loft.  Boats loaded with sails from warships were brought into this slip and the sails were raised up through a hole in the floor of the sail loft that once was on top of the columns. 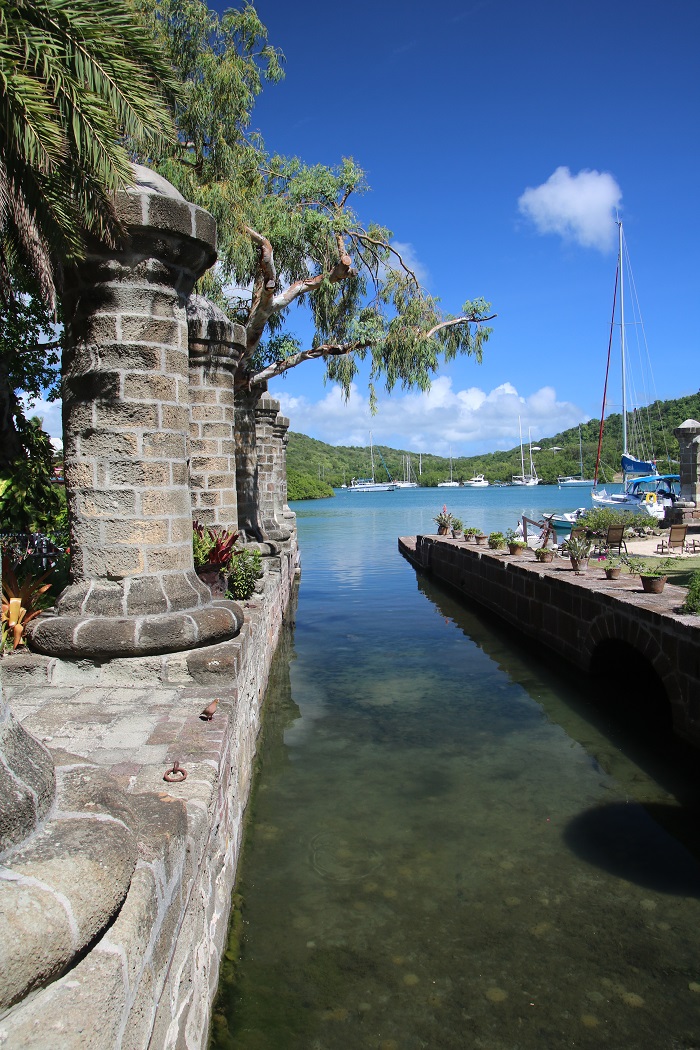 There are lovely views everywhere. 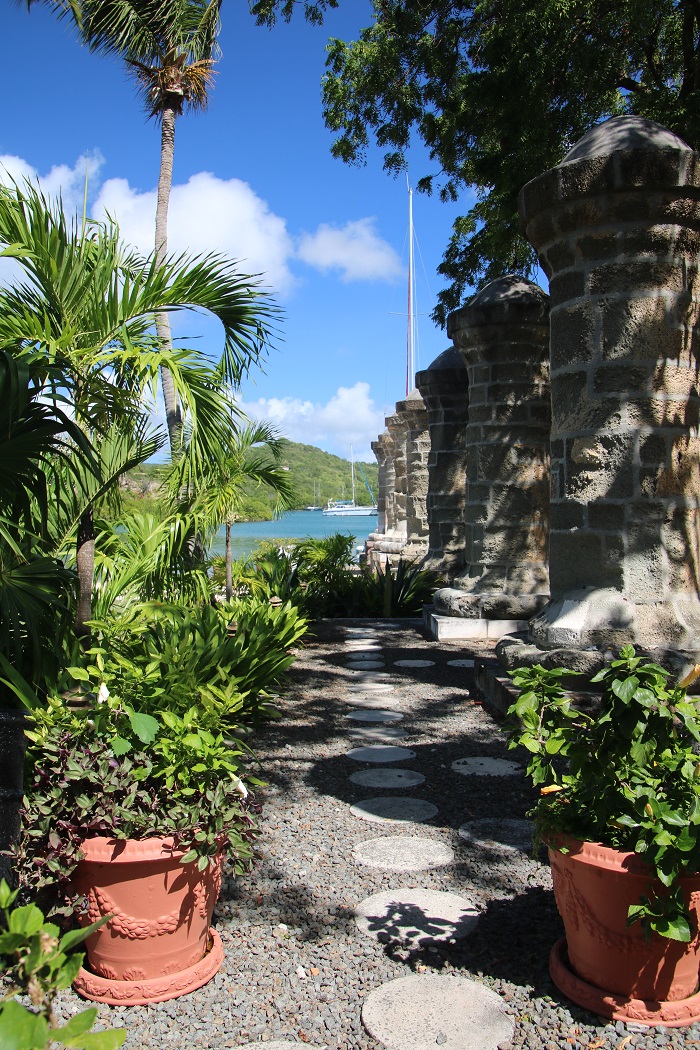 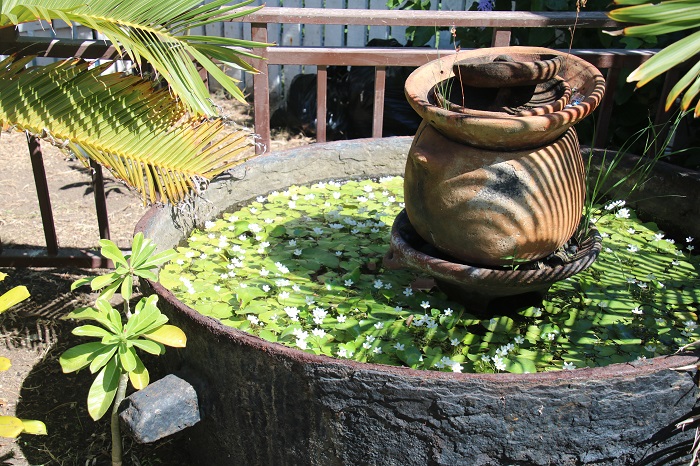 There is much to do in the Dockyard and that’s where Prince Charles will be visiting on Sunday afternoon.  Brenda and I are going to try and catch a glimpse.  Fortunately, we have some pretty well connected friends so perhaps we will get lucky.   “Charles, want to stop for a beer aboard Pandora?”

So, back in Falmouth harbor, Pandora’s on the dock for one more night before we move out to anchor with the rest of the fleet.  It will be nice to out in the breeze and surely way less expensive than slip and electric.    Here’s Pandora, front and center. 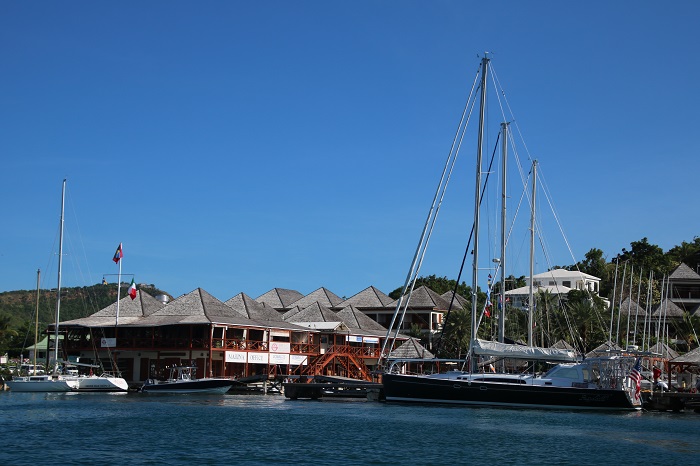 Also, sharing space at the dock is a school of Tarpon, each over 4′ long. 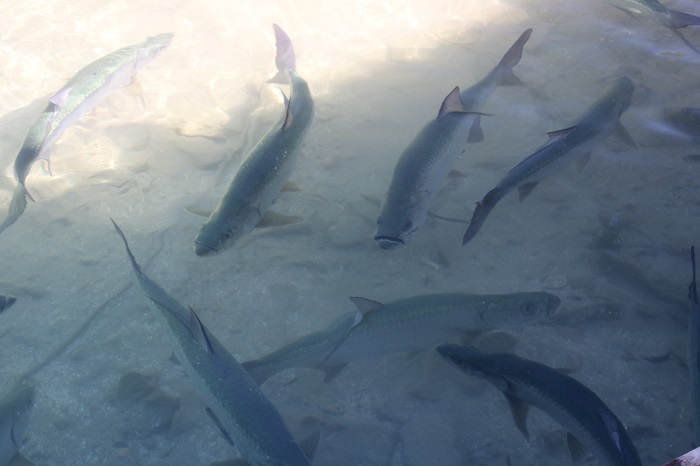 I can only imagine what it costs to keep a boat like this 220′ sloop Anatta, launched in Holland in 2011, on the dock. 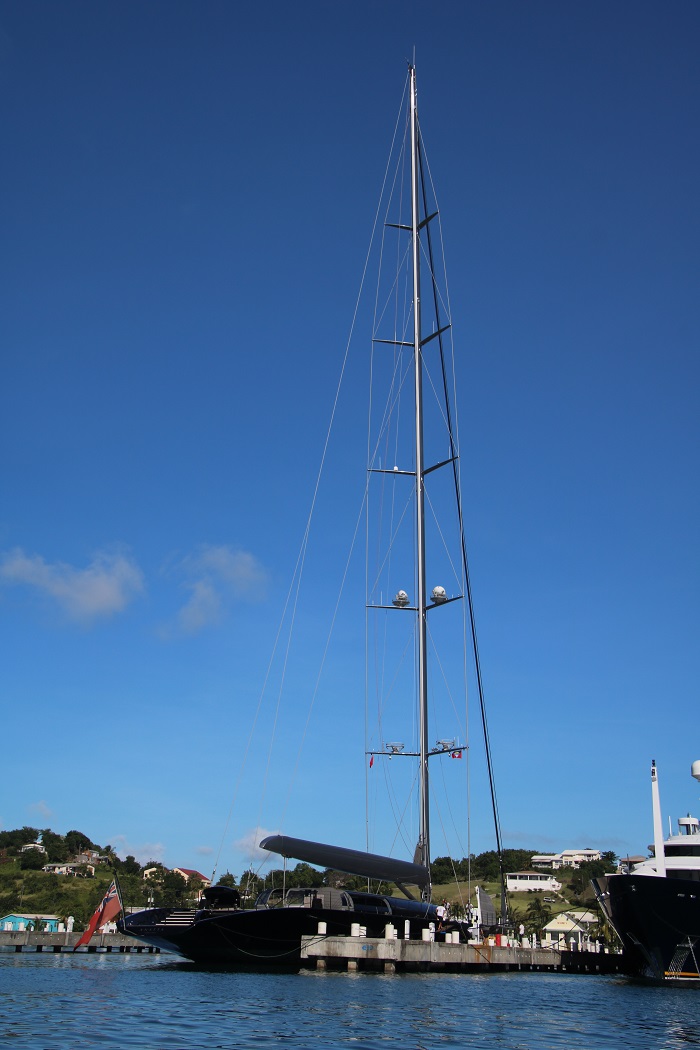 The scale of these yachts is amazing.   How big can a boom get? 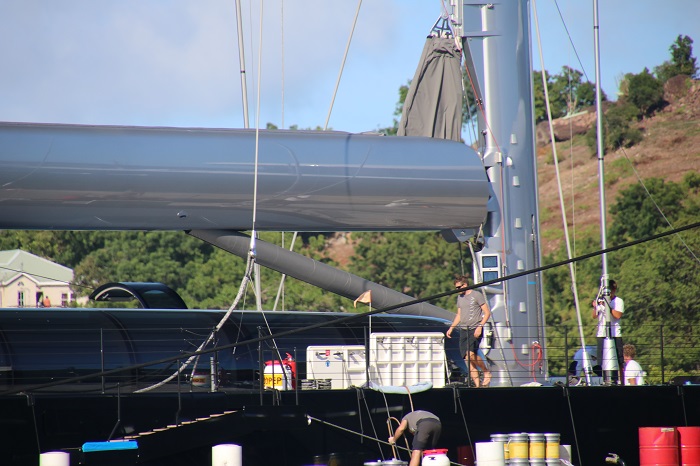 Or the electric bill for this.   I was told by the marina manager that some boats use over $1,000 of electric every day.  Imagine?  I can hardly wait to get my bill.   I got fuel and learned that the largest order recently was for 100,00o liters.  It took several days to pump it all aboard. 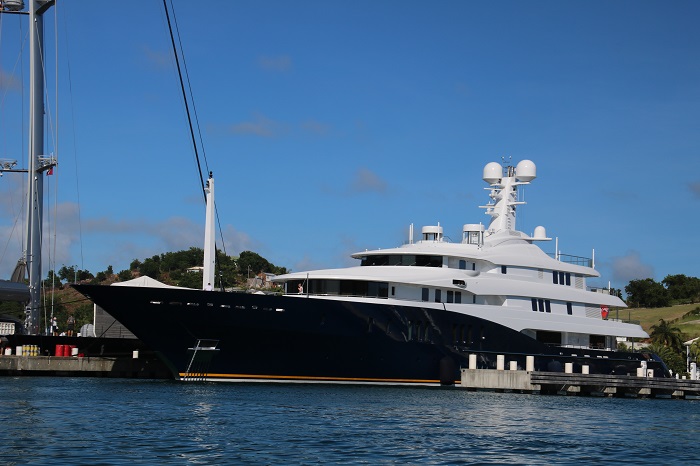 Up on the top deck are two… Elevators?  Popcorn makers?  Can’t figure it out. 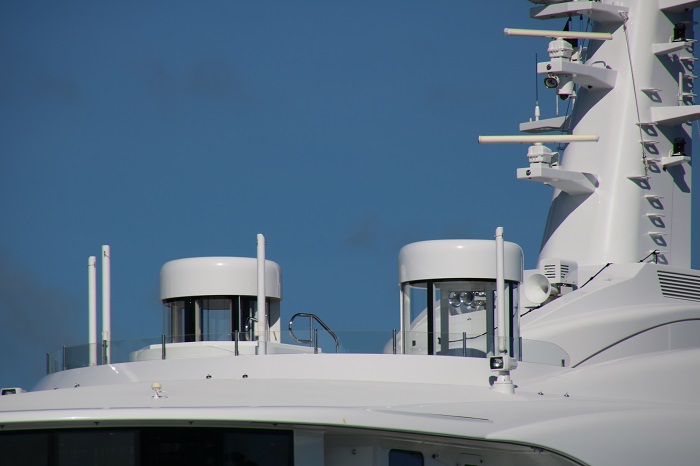 We saw this very unusual yacht, Adastra in St Martin last winter.  Looks like a Starship to me.  We met the captain and he’s agreed to let me come aboard later in the week to take some photos.  She’s a remarkable yacht built to very high standards. It seems that she will soon be available for charter so they are here for the charter show and he said that the owner is open to some publicity.  Will be interesting, that’s for sure. 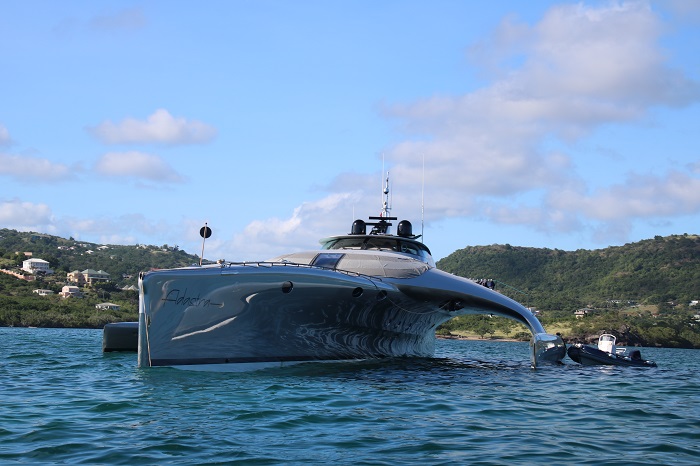 So, here we are in Antigua and so is Prince Charles.  I guess I’d better wrap this up so I can get ready for a “royal sighting”.

Yes, that would surely be a bit different, wouldn’t it?