>Boats of Maine and a cruise with The Corinthians.

>We spent the better part of the last week enjoying Maine aboard Pandora on a cruise with The Corinthians.  For readers of past posts, this group looms large in my life as I serve on the Afterguard, or leadership board of the group.  It’s a great group of sailors from all over the northeast from Boston to Annapolis.  Among many activities that the group has, is the summer cruise is here in Maine on alternate years.  Nearly 50 boats participated this year, with a good number making the trip up from Annapolis. We started our cruise in Booth Bay Harbor and headed east to Rockland, Fox Island Thoroughfare and then on to Gilkey Harbor in Isleboro.  The cruise headed on from there but Brenda and I stayed on for the Seven Seas Cruising Association Isleboro rendezvous.   The SSCA is new to us but they, as a cruising and liveaboard group, seem like a lot of fun and we are looking forward to learning more about them and making new friends.

I thought it might be fun to include some photos of “boats of Maine” to show some of the diversity that you see as you cruise the waters of Maine.  There is no question that sailboats dominate, very unlike the waters near the New York area, where it seems that power is the preferred choice.  The predominance of sail in Maine is likely because of the fact that precious few can afford the fuel to make the run here.  For me, I doubt that I have burned 70 gallons to date this season and I have moved Pandora from Annapolis to CT and now to Maine, a distance of probably about 600 miles of sailing.   That’s a long way at 6-7kts.  Fortunately, Pandora is easy on the fuel and only uses about .9 gallons per hour when we are under power which is fortunately, not all of the time. 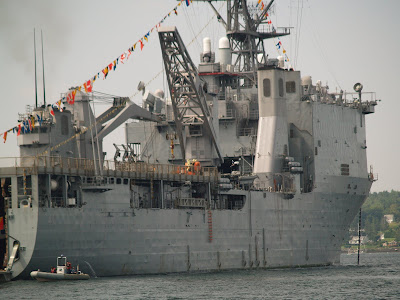 When we were visiting Rockland the Navy came to town. Unfortunately, we left as they opened the ship up to visitors.  What an amazing sight.  This ship just dwarfed everything else in the harbor.  I wonder if it was built at Bath Iron Works. I expect so as that’s probably why she is visiting, to show the flag.  They were also, no doubt, in town for the lobster festival this weekend.

If you are more inclined toward the varnish verses the iron crowd, try a visit to Camden.   Too small for the Navy but not to small a place to show the flag, even if it’s a private signal. 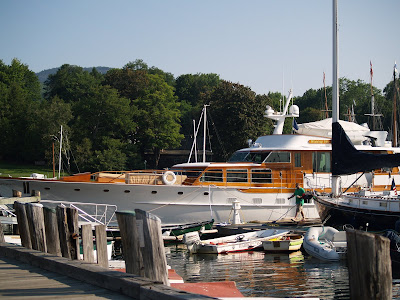 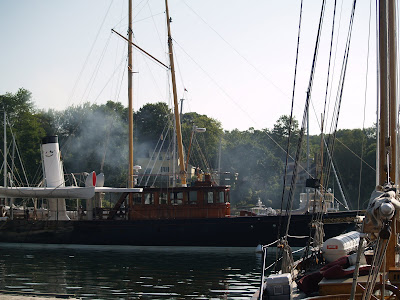 Yes, this is what you get if you can keep your money out of the hands of the government and if you want to see the fruits of capitalism, a visit to Camden will never disappoint. These two lovely beauties were tied up at the town dock. So unfortunate that they weren’t able to find room at the Camden Yacht Club or another more worthy spot.   Some times you just have to hang out with the unwashed, like it or not. 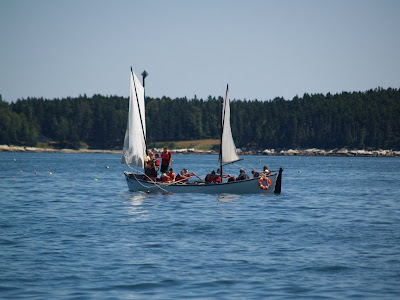 Speaking of the unwashed, if you feel a bit like roughing it, there is always an opportunity to go out with the gang from Outward Bound.  This program helps young people, and some adults that have never grown up, learn to be more self reliant. For me, and definitely Brenda, it would be tough to give up the warm showers.  It has often been said that when it comes to boating, “don’t spend a lot of time on at boat that’s shorter than your age”.  In the case of this crew, I would say that the numbers work as it appears to be a group of 20 somethings. 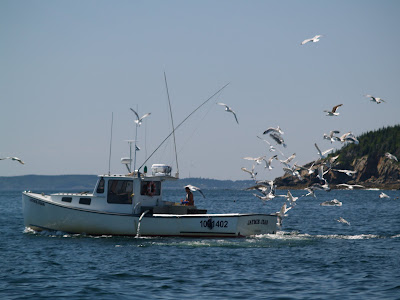 And, there’s always a mess of lobster boats out feeding the gulls. It’s amazing how the birds materialize when the old bait and crab by-catch is thrown out when the traps are hauled.

It’s not a boat but this house on Fox Island Thoroughfare is really interesting. It does look a lot like the transom of a boat. I’ll bet that it has great furnishings. 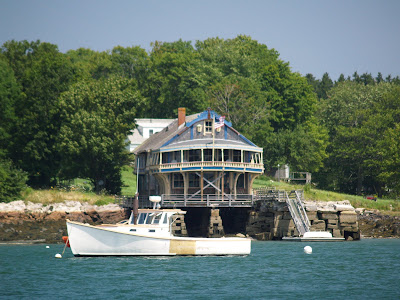 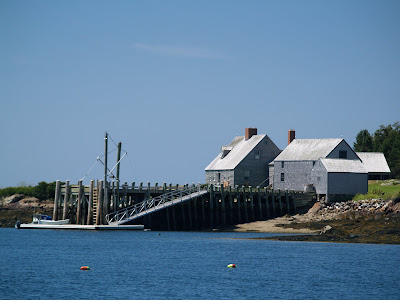 Since I have gotten off of boats, these two shots are of some of the buildings on the Wyeth compound on Allen Island off of Port Clyde.  It’s clear,  the look of the buildings on the island that Andrew and Betsy Wyeth had both money and taste.  What a great spot.  This other building, and there are many on the island, really looks like one of Wyeth’s homes.   Very idyllic. 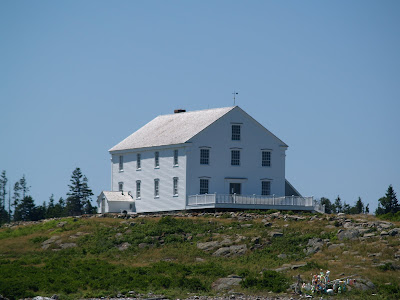 Off now for a day ashore with our new SSCA friends.  Lot’s to do and I’ll do a post soon about this very interesting group.
This entry was posted in Uncategorized. Bookmark the permalink.