>At 05:30 today I dropped the mooring in Mystic to head to Boothbay Harbor Maine for our annual visit Down East.  I am not certain of exactly what year we first went to Maine but I think that it was about 14 years ago.  This year the plan will be to keep Pandora in Maine waters for the month of August and head back to Mystic and ultimately to Annapolis in the Fall.  This trip has become something of a tradition for Brenda and me.   As she doesn’t enjoy the long delivery trips, I assemble crew through my connection with The Corinthians, a great sailing group that I belong to and am very active with, and Brenda joins me by car.   The Corinthians will also have their cruise this year in Maine and will be joined by members of the Little Ship Club of London.  Some 35 members of the LSC will make the trip and join for a total of 65 boats for a week of racing and cruising in Maine waters.   Interestingly, two of the LSC members joining us will have made the trip over on their own boats.   The Corinthians and LSC clubs have had a long and very close association with members of each group visiting the others to sail together every few years.

With me on this trip to deliver Pandora to Maine are three others, all quite experienced sailors.   Having left first thing this morning from Mystic we will reach the Cape Cod Canal mid afternoon, in time to catch the fair current that will help push along to the eastern mouth and into Cape Cod Bay.

Our trip across the Gulf of Maine will take us through some of the most productive waters on the east coast and the home of many whales, including the endangered Right Whale.  Unfortunately, we aren’t likely to see many on this crossing as we will be crossing the best whale watching waters over night in the dark.

When I heard the recent report about the whale that landed on the deck of a small sailboat off of Cape Town South Africa, I had to think about that happening aboard Pandora.  After a bit of searching on the Web, I didn’t find many references to whales striking boats, however, it does happen from time to time.   When I saw a photo that someone sent me from the NY Post yesterday, I thought that it must have been a doctored photo but it seems that this really happened.  I wouldn’t want to have a 40 ton whale land on Pandora.   I tried to find a photo that I could post on the site but the best I could find was a link to the New York post story.  Check it out.

The most famous of these “encounters of the whale kind” was the ramming and sinking of the 87′ Nantucket based whaling ship Essex.  On November 20th 1820, while some of the crew were hunting a pod of whales in the South Pacific, a very large whale repeatedly rammed the Essex and sunk her.   Some have speculated that toward the end of the height of the commercial whaling industry, some of the whales that remained had become more aggressive and were more regularly attacking the ships that were pursuing.  Who knows if that was what led to the ramming of the Essex but it’s fun to think about.  Herman Melville drew inspiration for his book “Moby Dick” from the Essex incident.   To learn more about this incredible story click here.

Anyway, I hope to be able to post my own photos of my own “whale encounter” from my trip to Maine.  Who knows.  For now, I will just have to put up this photo of me piloting our dink with a “whale’s load” of luggage.  Yes, it’s not the best analogy and a literary stretch.  However, it’s my blog.. You’d think that this amount of stuff must be able to sustain us for a year at sea.  Alas, it was for just a one week voyage. 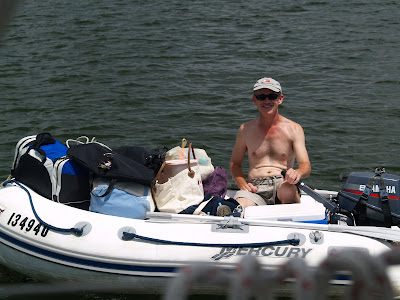 Yikes, perhaps I need to eat more ice cream.  Kind of a scary image.
This entry was posted in Uncategorized. Bookmark the permalink.