Getting ready for winter

It’s almost Labor Day week and Pandora’s still on the hard.  That was the plan all along as we’ve been pretty busy with travel and other “land chores” to use her so out she goes.  However, that’s not to say that I haven’t still been focused on Pandora and all the little and large things that need to be done to get her into shape for the winter afloat.

You may recall that I had a problem with the quadrant linkage to the autopilot last January on my way from North Carolina to Tortola when a critical part broke.  Fortunately, I found a spare in my “stash” and was able to get us back in shape again with a minimum of trauma.  However, because we feared that we’d have a problem again, we were forced to sit behind the wheel for the rest of the trip just in case something happened again.

The next day, as we surfed down 20′ waves mid way through 4.5 days of gales.   I wrote about how things were going in this post  and the prior owner, who must have been following my trip, left a comment with these words of reassurance…

“Glad you made it! Better you than me. That autopilot bolt is a poorly engineered and machined piece of junk. I have broken several even in dead calm under engine power. Hence the spares on board. Replace the spare you used as soon as you can. Have Brenda bring it down. It would be a good idea to replace it before a significant passage. Enjoy the BVI!”

Yeah, good suggestion.  Well, it seemed to me that I had to find a way to solve the problem, “bad design” or not.

You see, the leverage, with tiny washers filling in a gap, just weren’t spreading the load broadly enough so after a while the pin, working back and forth, loosened up and, well, just snapped off, again and again.    See the washers stacked up on the right?  Those just didn’t spread the load enough so, as the pressure worked back in forth, the pin fatigued and broke just above the washers. 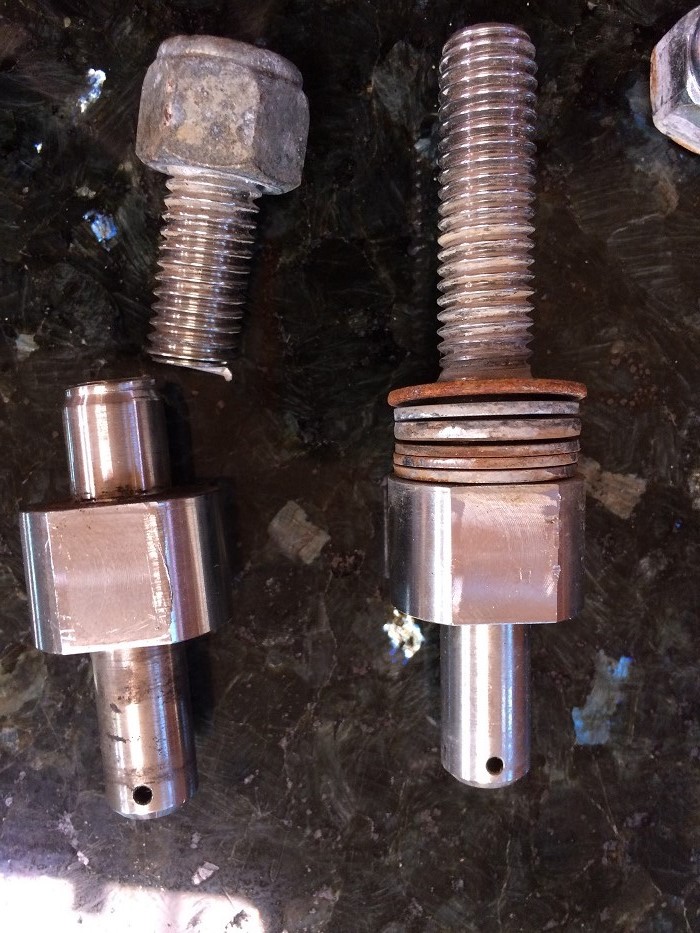 I know what I am describing might not be obvious without seeing the part in place.  So, the next photo shows the new pin attached to the autopilot and quadrant with larger washers that I  hoped would keep things more steady.

Note that the fender washers I put in place of the ones that were there are larger than the widest part of the fitting that broke.  As the arm for the autopilot arm to the right, pulls back and forth, the new larger washers should spread the load more broadly and minimize the shear pressure on the pin.  That proved to do the trick for the rest of the winter and the trip back to CT in the spring. No breakage and the part stayed tight and in place for the whole trip.  Problem solved? 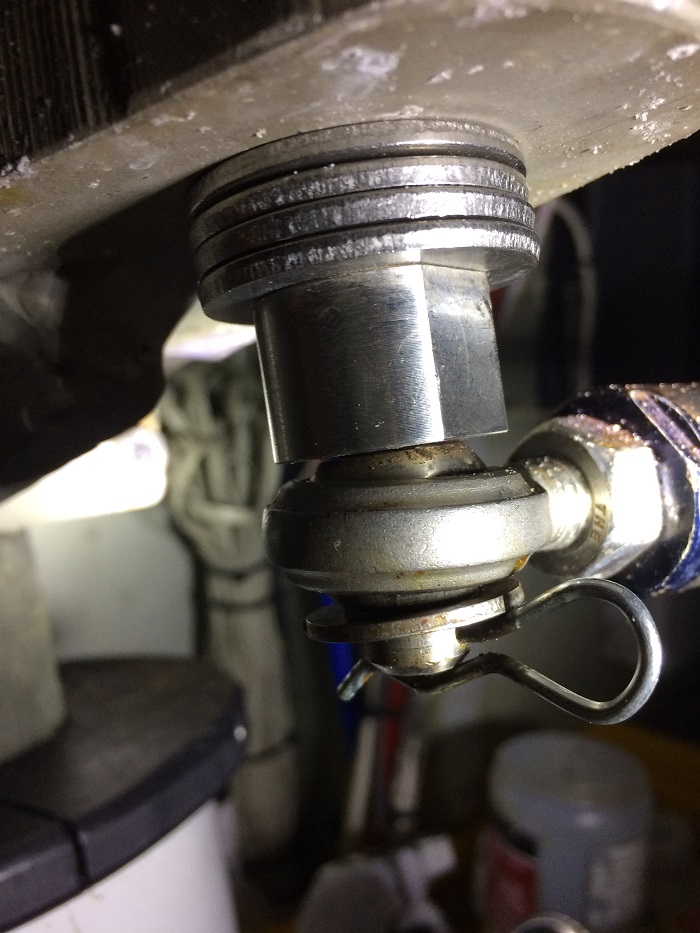 I still wasn’t confident that I could count on things holding together so I worked with Paul at the local machine shop near the marina where Pandora is on the hard and described what I had in mind. The concept was to support the pin more securely and spread the load as broadly across the quadrant arm.   Properly done, the pin should hold up indefinitely.  The new “collar/washer” is on the right.  I had Paul bore a hole for the pin and “counter-bore” an area to nestle the “hip” of the wider part of the pin for further support. 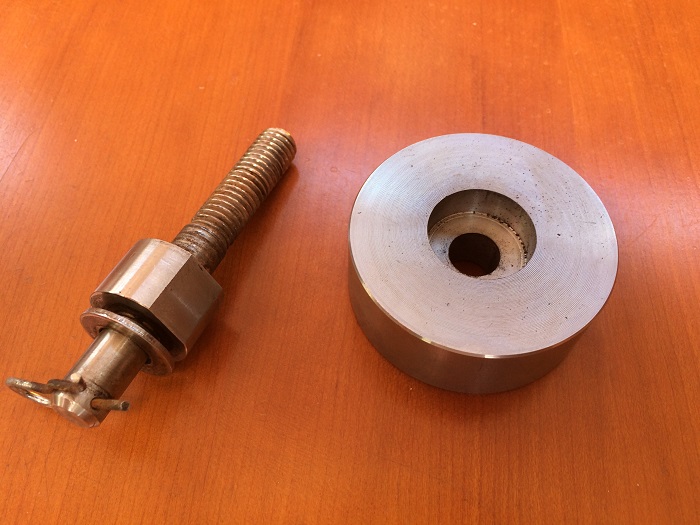 Here’s the pin inserted in the new “washer”.  Note that part of the widest area on the pin is itself nestled inside the counter-bore.  You can imagine that this will spread the shear loads more broadly across the quadrant arm. 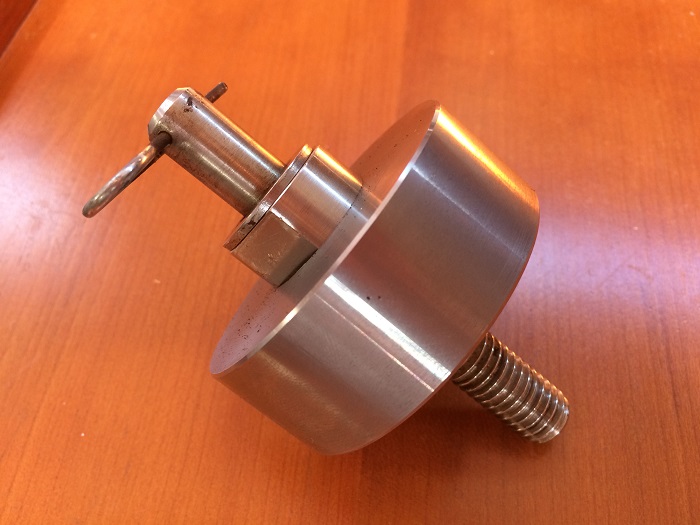 And, the pin in place on the quadrant.  See how much broader the support is now and with the widest part of the pin secured inside the “washer”?  It should be very secure now as the shear load is spread across the full width of the quadrant arm verses a spread of less than an inch in the old design that failed again and again.

I guess that we will just have to see how it goes.  Just in case, I now carry three spare pins.  That alone, like carrying an umbrella on a sunny day, should guarantee that things hold together.   I’ll report back on how it goes. 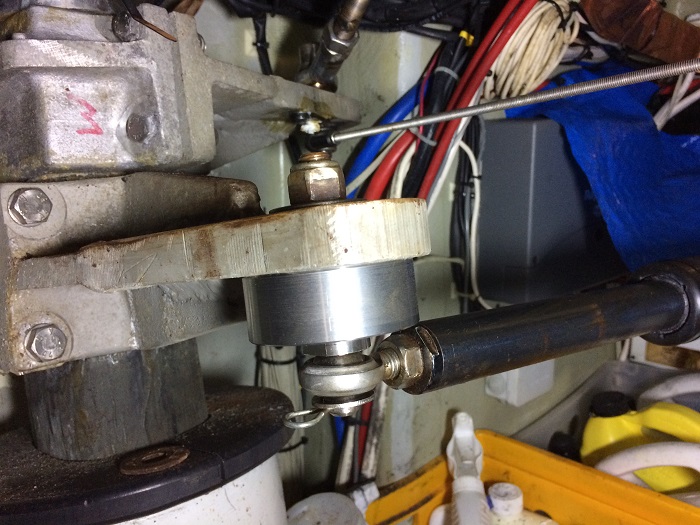 However, eEVERYONE KNOWS that once below, salt is very difficult to get rid of, especially when it’s on cloth covered settees.  Can you say clammy?   In the past my solution has been to drape sheets over anything cloth while we were on passage but now I have installed lovely sunbrella covers.  They are simple and just attach with snaps and turn nuts so that they won’t slip off and can still be removed easily. 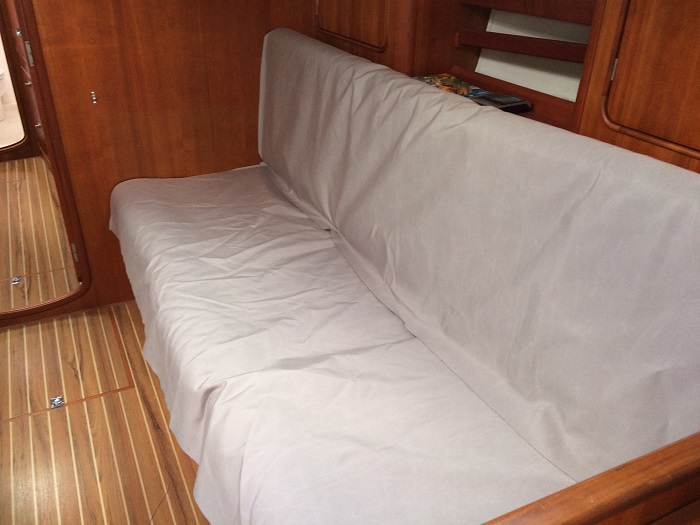 Aren’t they just lovely?  Lovely or not, they can rinsed off. 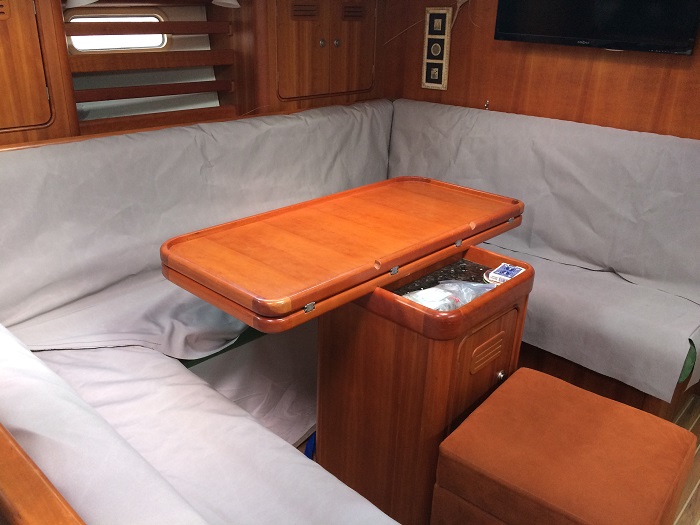 Oops.  Forgot to make one for the ottoman.  I’ll get to that soon too it’s a popular resting spot for salty feet too.

Everyone knows that it’s a bad idea to paint running gear as the metals in the anti-fouling paints can react badly with the bronze and stainless gear and cause severe electrolysis.  However, this means that the unprotected prop and shaft is very prone to fouling and keeping the gear clean is a constant battle.  I have heard of anti-fouling paints that are supposed to solve this problem but I have never tried them.   The primary problem is that as the prop spins, the paint, I have been told, wears off.    With this in mind, I am trying Petit prop paint this year.  I’ll let you know how it goes. 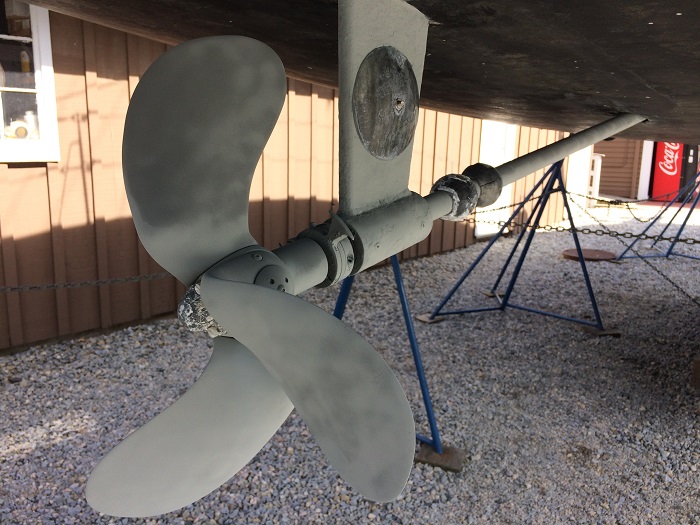 Finally, over the last few years we have visited quite few places aboard Pandora and I thought it would be fun to display the courtesy flags in my office.  To do this I put up a wire between two walls with a turnbuckle to tighten thing up nicely.  From Left to right the flags are…  Dominica, British Virgin Islands, Bahamas, Cuba, France which would be St Martin, St Barths, Guadalupe, Antigua and then various clubs, Antigua Yacht Club, Seven Seas Cruising Association, Salty Dawg Sailing Association and the Corinthians.   Finally, just under the clock, the Essex Yacht Club. 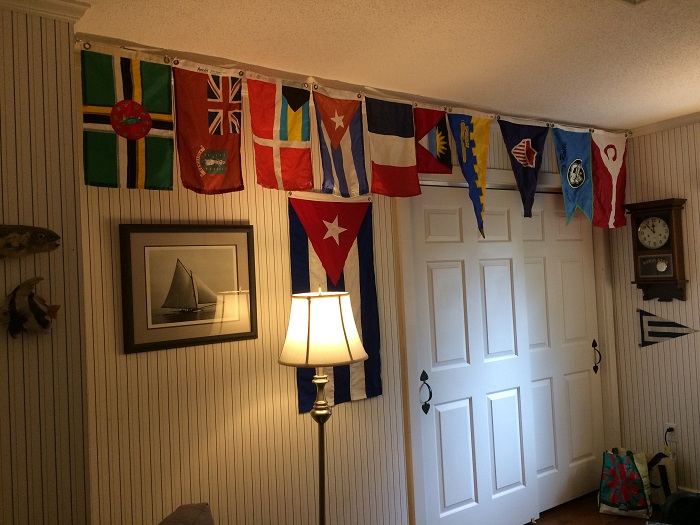 I’ll be using a number of these again this winter and will snag them when I head south but until then, it seems such a shame to leave them tucked away in a locker aboard.  So, for now, I can enjoy them at home too.

That’s it for now.  Tons to do and it’s a beautiful day to hang out at the boatyard.

One response to “Getting ready for winter”