>Brenda and I were sitting aboard Pandora in Hadley Harbor, near Wood’s Hole MA, on Naushon Island when this magnificent yacht came into the harbor and picked up a mooring.  I have seen wonderful yachts many times but was struck by this one in particular.  At first I thought that it was a Hinkley but that wasn’t it.   I did notice a tall gray haired gentleman aboard who looked familiar but it didn’t connect until someone else on another boat that I talked to clued me in that it was Senator John Kerry.   Over the next few days that we were there the Senator did indeed take Isabell out a number of times.  The boat was launched in the last year in New Zealand by Friendship Yachts and is one of their 75′ designs.  Take a look at the photos of the actual boat, as it must be the first one of the design to be built, on their site.  It’s a magnificent yacht by any measure and the boat on the site looks just like Kerry’s boat Isabell.  And it’s really massive as this shot from her stern clearly shows.  The “glamor shots” on the site look so elegant. 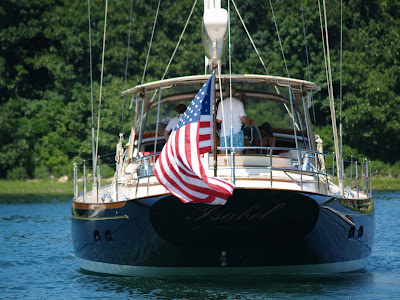 Not a great shot but that’s the Senator on the helm.   I guess he doesn’t always wear a suit.

This is a shot of the boat from Pandora’s viewpoint.  The lines are really sweet.  At night the mast is lit all the way up, the cockpit is wonderfully lit and there are even lights below in the water that make the area below her glow green.  Against the dark star lit sky it’s breathtaking. I wish that I could have taken a picture of that sight. 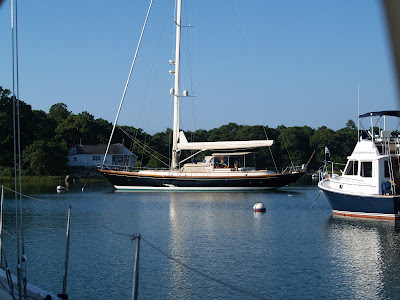 Brenda and I have been visiting Hadley Harbor since the late 70s in a succession of boats from our first 20′ catboat all the way up the line to Pandora, and have always enjoyed the hospitality of the Forbes family who place moorings in the harbor for guests/visitors to use.  While you can’t go ashore unless you are the guest or relative of the Forbes clan, they do set a small island with trails aside for visiting boats to use for picnicking and dog walking.   The main house up on the hill is really impressive and massive.  I have a good friend who was a guest of the Forbes for a week as part of a group of visiting artists.   What a place.

The senator is no stranger to the island as he grew up visiting the island as a member of the Forbes clan.  Wikipedia has an interesting article about the island and it’s history.  So pleased do know that the Boston Forbes clan made it’s money running drugs in the China opium trade. 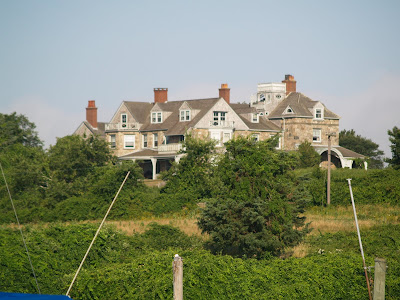 Some of the homes on the island are much more modest like this one at the head of the harbor.  Years ago Brenda and I were invited for dinner with some Forbes friends of us and this is where we had dinner.  It even had an outdoor shower.  No, it didn’t have one indoors though.  I was wonderful as our boat at the time didn’t have any shower at all. 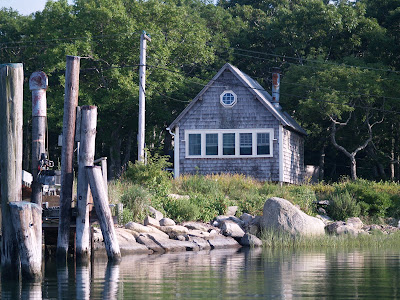 All the boats in Hadley Harbor aren’t massive like Isabell.  There is even a small fleet of Herreshoff 12 1/2 boats.  This design is considered by many to be one of the finest small craft ever designed and the design looks as good now as it did a century ago when the first ones were launched at Herreshoff’s yard in Bristol RI.  They are lined up on the dock and are sailed regularly like this one. 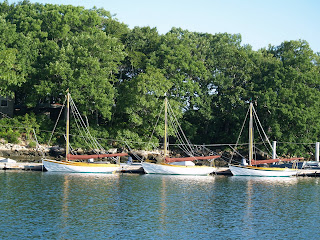 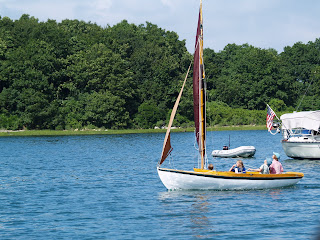 Prior to visiting Hadley we spent a few days in Vineyard Haven and on our way over to Hadley, we spied this wonderful little schooner.   What a great boat and flying the burgee of the Black Dog Cafe, an institution on Martha’s Vineyard. 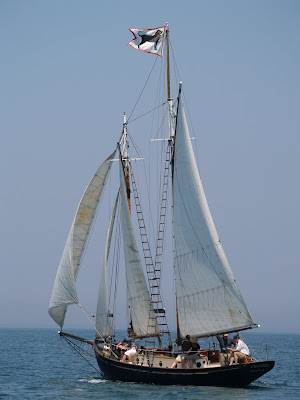 Well, we are off the boat now and won’t be back until I head back to Mystic to bring her to Maine later this month.   Here’s to more great sailing left this year.  More to come soon.

2 responses to “>Hadley Harbor with Senator John Kerry, sort of.”